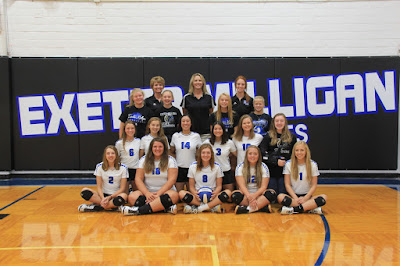 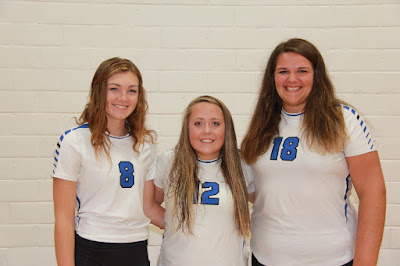 Exeter-Milligan has three seniors on the roster for volleyball:  From the left are Hannah Beethe, Katie Mounce and Tara Mueller. 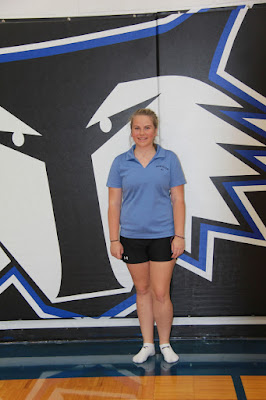 Macy Due is the lone girls golf team member at Exeter-Milligan for the 2017 season.
Posted by Leesa Bartu at 7:30 AM No comments: 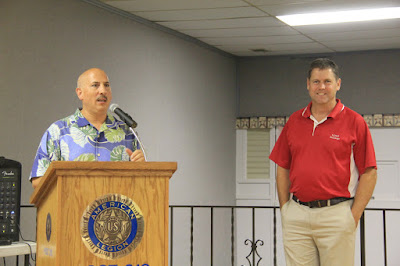 The Purple Ribbon Meat Program. It’s a win-win for area farmers along with Friend and Exeter-Milligan students.  The students get fresh, locally grown beef and the farmers and other business owners get both a tax donation and the satisfaction of knowing area students are served high quality meat.

Area business and community leaders, along with donors who participated in the program last year, were invited to hear all about the Purple Ribbon Meat Program on Friday, August 11, 2017 in Exeter.
After enjoying a sample of meat from the Purple Ribbon Meat Program, Superintendents Paul Sheffield, from Exeter-Milligan, and Dave Kraus, from Friend, spoke about the benefits of the program.

Sheffield noted that all of the beef served to students in both districts is from the beef donated.  “It’s great to have fresh beef to serve. It takes around six or seven cattle to feed both schools.  We do reserve some of the beef for raffles to help raise funds for processing.”

The program has been brought to Friend and Exeter-Milligan in conjunction with the Friend FFA Boosters.  Spearheading the program in Friend are Paul Segner, Joel Weber and Scott Vyhnalek and at Exeter-Milligan are Kevin Songster and Eric Milton.

Kraus noted that the program has been “very easy to adapt to and not a challenge at all on the school side of things.  A lot of schools have started this program and been successful. Now schools are calling us to see how the program has worked.”

Kraus added that his daughter, a senior this year, has noted the quality of the beef, “It sure makes a difference.  They can tell a difference and we sure appreciate it.  It’s been a great first year.”

Talia Goes, representing the Nebraska Cattlemen, spoke for a few moments.  She was thrilled with the response in the Friend and Exeter-Milligan districts, “Each program is a little different.  We take pride in the fact that local cattle producers are taking part and getting involved in bringing agriculture back in the school system.”

According to Goes, in 2015, over 70 schools in Nebraska were participating in the program.  She projects that by the end of the school year over 100 will participate.

On the school side of things, the kitchen staff is definitely on board with the Purple Ribbon program. Exeter-Milligan’s head cook, Lori Ruhl thinks, “It’s great.  The kids really like it.  They especially like the grilled hamburgers.  The kids know it’s local beef and that seems to help them enjoy it more.”
Since Exeter-Milligan has opted out of the government assistance program their options are little broader and they can include pork, as well.

Kevin Songster, one of the organizers from Exeter-Milligan also spoke and thanked the participants, “The kids are benefitting. We have seen some great support.”

He reminded the audience that a raffle during the Exeter-Milligan and Friend football game will give away two pigs to support the Purple Ribbon Meat Program.

Sheffield closed the program reminding the audience that the program “helps on budget. What is served to our kids is 100% locally raised beef.”

One requirement that the government places on any beef served to students is that it is processed in a USDA facility.  The closest USDA facility is in Henderson.  Sheffield noted that the first appointment for beef is August 24th.  He encouraged “anyone interested in donating either animals or funds to the program can contact me or Mr. Kraus and we would love to help them.” 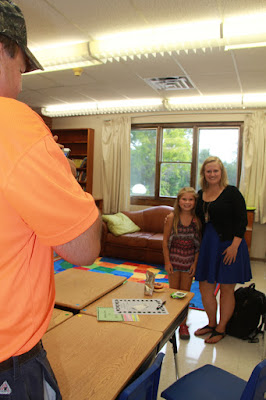 Exeter-Milligan hosted their open house at both Exeter and Milligan on Thursday, August 10.  Students were invited to bring their school supplies and find their desks.  Parents took the opportunity to take beginning of the year pictures with the new teachers.
Above – Doug Papik catches his daughter Kierra with fifth grade teacher Mrs. Brooke Soukup.
Below – Selah Petersen gets to know her new third grade teacher Mrs. Laura Steuben during the open house. 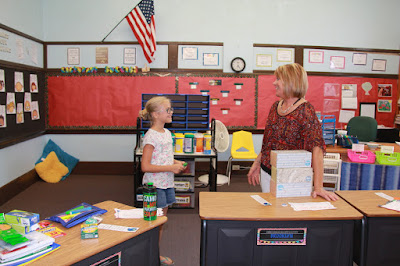 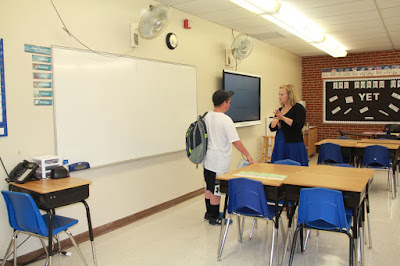 Above -Jayden Capek learns the ropes from his new fifth grade teacher Mrs. Brooke Soukup.
Below – Carver Kanode is all smiles in the fourth grade classroom of Mrs. Shellie Mueller. 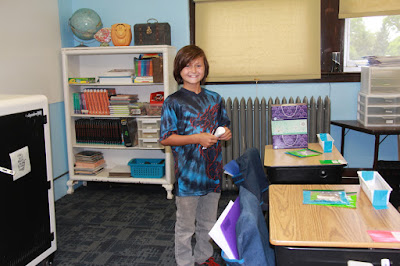