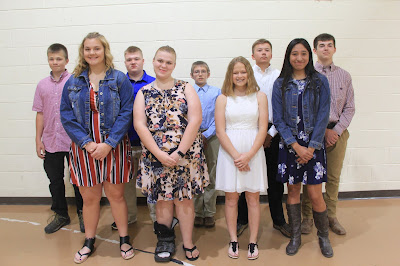 The Exeter Village Board met on Wednesday May 8th with a very short agenda.

The board approved the minutes and invoices and then opened the issue of painting the parking lines downtown.

Board member Justin Harre noted that one downtown business owner recommended “we do what they do in Milligan.  Just make short stubby lines about five feet long.  I don’t think we need the lines all the way out.”

Chairman Alan Michl added,” I agree there needs to be some kind of line.  If you don’t put something  they won’t get the angle right.  The less we paint the better.”

After further discussion the board decided to paint lines in the downtown area as well as around the post office but did not specify a length of the lines.  They asked Village Maintenance Supervisor John Mueller to check on a cost for painting the lines.

The board discussed some issues with the ball shack not being left clean and controlling access to the concession area and storage.

Clerk Erdkamp reported that one resident is not happy with the grass that was planted  during the street construction. Harre was also contacted by the resident.  Another resident left a photo of the buckets of the stakes they had pulled out with the mesh that held the grass down.  Michl has forwarded the complaints to JEO.

The board held a discussion on the Storybook park cleanup as Lynette has requested some assistance.
Pool Manager Katie Mounce has scheduled a meeting with the pool employees for May 23 to review duties, cleaning and concessions.

The board set the next meeting set for Wednesday,  June 5.