The Exeter Pool demolition is scheduled to start on Monday. See the slideshow to the right for pictures of the current demolition on the inside of the bathhouse. Check the Village of Exeter website daily for videos and pictures of the demolition and construction progress.
Posted by Leesa Bartu at 8:30 PM No comments: 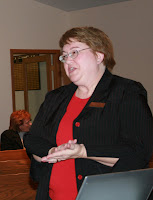 Tuesday evening the G.F.W.C. Exeter Woman's Club welcomed Linda Allen, MS, PLMHT, NCC, and a counselor from Louisville, Neb. for a presentation on the topic of bullying at school.

Allen spoke to the large gathering of women representing the Exeter G.F.W.C. Woman’s Club and the Fairmont G.F.W.C. as well as members of the community. She started the discussion with encouraging attendees to define a bully and then asked them to share a few of their thoughts with those sitting around them.

After giving an official definition of bullying Allen described some of the traits of the behavior. She also explored the reasons why kids bully and why adults should care.

Some of the more startling statistics include the future of those who bully. According to Allen, “Studies have found that 60 percent of boys who were bullies in middle school had at least one conviction by age 24 and 40 percent had three or more convictions.”

After describing the health consequences that those bullied often face, Allen explored the topic of cyber bullying. This bullying usually occurs through email, instant messaging, text messages, blogging or chat rooms and is become more and more common. Allen explained that this behavior is very disturbing for two reasons. “Cyber bullying messages and images can be distributed quickly to a very wide audience and children and youth can be anonymous when cyber bullying.”

Allen encouraged parents to keep a close eye on children when using the Internet and continue to monitor Internet usage, as they become teenagers. She encouraged parents not to erase any communication that is threatening but make copies in case they are needed for future action. “This is a whole other ballpark for parents to understand,” said Allen.

Unfortunately Allen has found that bullying “starts early in our classes, I sometimes am using the word bully with Kindergarten parents.”

She emphasized that the reduction of bullying in schools requires a “change in the school climate” and “in norms for behavior.” Respect, trust, optimism and internationality (know why we do the things we do) were what Allen described for the school climate.

As far as norms for behavior she described two solutions, mentoring and consistency in discipline. She encouraged those in attendance to look online at several websites for more information on stopping bullying in our schools and homes.

Posted by Leesa Bartu at 6:44 PM No comments:

Exeter-Milligan Players on the All Conference Volleyball Teams