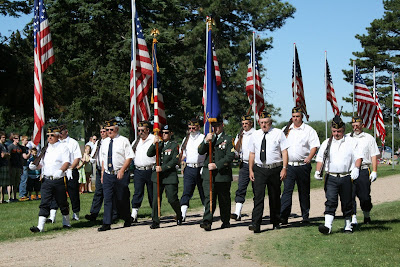 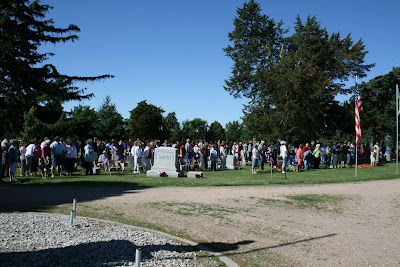 After the presentation of the flags by the Legion members assisted by Army National Guard Members Jason and Lacey Hood (granddaughter and her husband of Terry and Elaine Salyer of Exeter) Bob Dumpert, master of ceremonies presided.

The Exeter-Milligan Band played the Star Spangled Banner as all stood and then the invocation was given by Rev. Tim Adams. Adams prayed that our leaders would have both "sound judgement and right motives. . .bring peace so that we may no longer add names to this memorial list."

The band played the Salute to America's Finest before Tim Wilbeck gave his address. Wilbeck told stories of heroes from several different wars. He spoke of the nearly one million who have died in war since 1775 "they cannot be replaced. When asked how a nation left in their debt should remember them? They would answer, take care of my family."

Wilbeck reminded the crowd of Dr. Martin Luther King's words while imprisoned, "Injustice anywhere is a threat to justice everywhere."

In closing, Wilbeck encouraged the crowd ,"Let us always remember."

After the salute to the dead, Blake Papik played taps and there was also a taps echo played. Later in the morning the National Guard was scheduled to flyover the cemetary.

The American Legion Auxiliary welcomed the large crowd to the Legion home for rolls and coffee.
Posted by Leesa Bartu at 11:39 AM No comments: 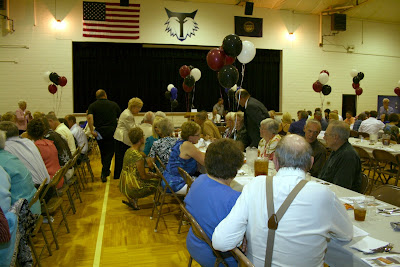 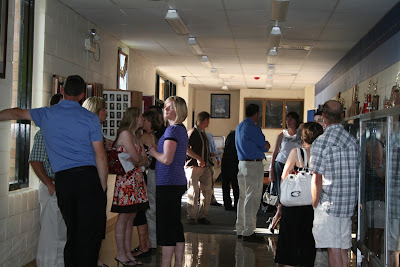 The Exeter Class of 2000 greets alumni as the come to the banquet.

The Exeter Alumni Banquet hosted by the class of 2000 was well attended Saturday evening. The Class of 2000 President Mitchell Schlegelmilch welcomed the group and then invited classmate Monika Ekeler to give a blessing for the meal. Buffet supper was Roast Beef, Chicken Marsala with baked potato, vegetables, salad and roll.

The class of 2010 was well-represented and introduced by class president Charlotte Andreasen. Each honor class was invited to introduce their classmates present. During the evening, Exeter-Milligan counselor Tim Wilbeck reminisced of times at Exeter High.

Justin Harre gave out the golf tournament awards. This year 25 teams of 2 participated in the Alumni Golf Tournament.

Alan Songster presented some information on the Exeter-Milligan School Foundation and Jen Murphy gave the crowd some great information about the recently formed Exeter Area Community Foundation. She spoke of the recent challenge grant given by Dick and Louisa Manning and also an additional $20,000 just given to help meet this challenge.

The annual business meeting was held and the meeting and banquet was closed.
Posted by Leesa Bartu at 11:14 AM No comments: 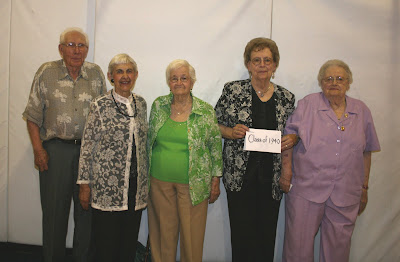 The Exeter Class of 1940 are pictured from the left Boyd Bivens, LaRayne (Steyer) Wahlstrom, Gladys (Ferguson) Hopken, Evelyn (Harre) Coffey and Reta (Harre) Coffey. While many of the members of their class are deceased, there was a special bouquet of flowers on their table in memory of Tom Votipka who died recently. 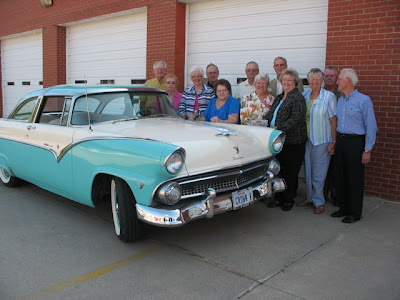 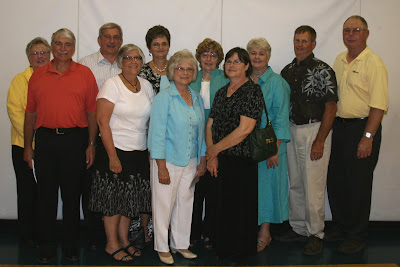 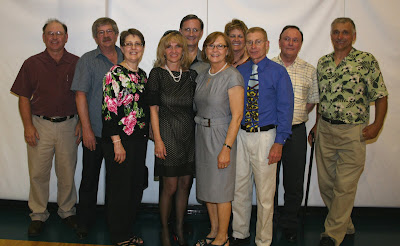 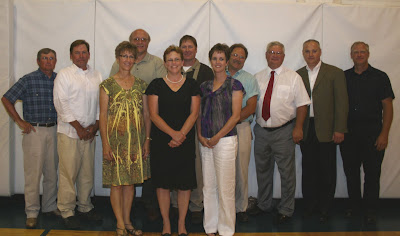 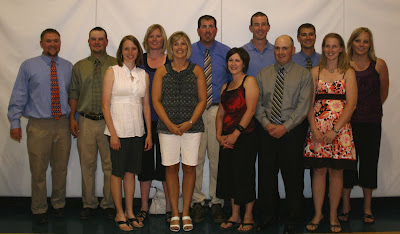