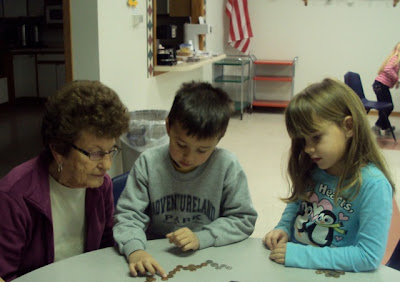 Cade Kresak and Cece Murphy counting money with Darlene Becker at the Exeter Senior Center.
Mrs. Sharon Lott's Exeter-Milligan first graders had an enjoyable time at the Exeter Senior Center on Wednesday, January 11. We counted money for them, did flashcards with them and showed them some addition and subtraction games we use to practice our facts on the I Pads.
The seniors baked cookies, popped popcorn, and made juice for us for a snack at the end of time with them. We will come back to visit again in February for a Valentine's Day Party and the first graders will make the snacks this time.
Posted by Leesa Bartu at 8:09 AM No comments:

Exeter Cub Scouts just have a few meetings before their biggest event of the year, their Blue and Gold Banquet and Pinewood Derby.  They have been busy finishing up their badges, preparing invitations for the event and getting ready to make some decorations to fit their theme of snowflakes 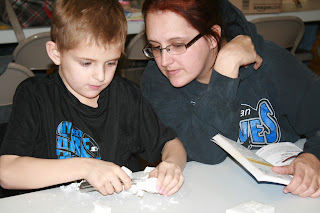 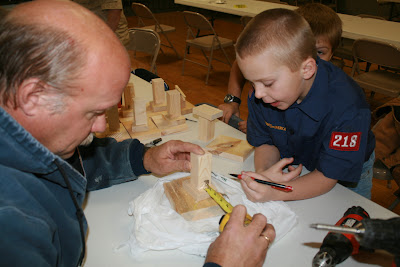 Dean Bartu, left, helps Braden Capek, right, build a stand for his Pinewood Derby car as the pack prepares for the Blue and Gold Banquet. 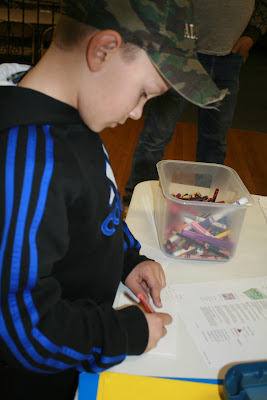 Tiger Cub Marcus Krupicka decorates an invitation to the Exeter Pack 218 Blue and Gold Banquet with the scout symbol and some snowflakes to match this year's wintery theme. 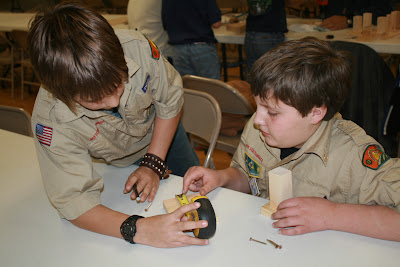 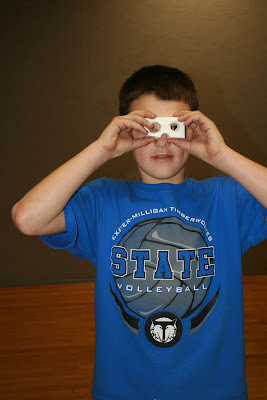 Bear Scout Jackson Beethe models the binoculars he carved out of soap.
Posted by Leesa Bartu at 8:20 AM No comments:

Ann (Morgan) Pospisil was born to William (Colonel) and Eva (Tous) Morgan on June 30, 1916 in West Blue Township, York County, Nebraska, the seventh of eight children. She died peacefully in the presence of family on January 13, 2012 in Exeter after 95 very full years of life.
Ann was married to Lewis Dale (Tobe) Pospisil on August 3, 1937 in Geneva, Nebraska. From this union, eight children were born.

She was raised in the Catholic faith, attending parochial school in Exeter , and graduating from Exeter High School. She received Normal Training to prepare her for teaching in a rural school until marriage.

She lived most of her life in the Friend and Exeter area but spent 4 years near Burwell which she said was one of the happiest periods of her life.

Ann loved flowers and always had beautiful gardens wherever she lived. People walking by her home in Friend always stopped to admire her flowers and enjoy her company. She never met a stranger and always made friends wherever she went. Ann was a member of the Turkey Creek Homemakers and Altar Societies of Friend and Exeter.

She loved celebrating her birthday, so much so she took great pleasure in celebrating her “birthday month”. She and her family were able to enjoy one last celebration for her 95th birthday in 2011, with an open house attended by her wide circle of friends. Memories of her happiness on that day will help her friends and family remember her with great affection and carry on her joyous spirit in the years to come.

Ann rejoined the Catholic Church later in life, becoming a member of St. Joseph’s parish in Friend and later at St. Stephen’s parish in Exeter, where she was a member at the time of her passing. Her strong faith was an extreme comfort to her throughout her life.

Her devotion to her family, courageous acceptance of life’s challenges, and genuine friendliness won for Ann the high regard of all whose privilege it was to know her.

A Funeral Mass for Ann was held on Tuesday, January 17, 2012 at 10:30 a.m. at the St. Stephen’s Catholic Church in Exeter with Fathers Tom Kuffel and David Bourek officiating. James Pospisil accompanied Jessica Ruhl in the singing of “Amazing Grace,” “Let All Mortal Flesh Be Silent,” “Ave Maria,” “I Am The Bread Of Life,” and “How Great Thou Art.”