The Exeter Village Board met on Tuesday, March 8 for their regularly scheduled meeting.

After reviewing the bills and prior month’s minutes the board heard about insurance from Kory Kahlandt, President of Generations Insurance.

He shared with the board a premium breakdown back to 2012.  “I wanted the board to be aware there is a dividend paid.  If it was a good claims year, with no weather, looks like the dividend will be about $12,000.00 this year.”

Kahlandt explained that rising property values have driven the price of insurance up which is reflected in the village bill.  He added that replacement cost for the fire department vehicles increased three percent, “That would be a brand new vehicle, no depreciation.”

“Thanks for putting this together,” responded board member Justin Harre, who added that he appreciated seeing all of the figures laid out in an easy to read manner.

The board discussed a possible annex of property on the north side of the village where the Farmers Cooperative has their fertilizer stored. After reading some advice from the village attorney the board decided to contact the concerned parties and then possibly hold one special meeting in order to move the process along faster.

The board discussed what the village responsibility would be to annexed property owners.  “we would need to provide water service and sewer up to the property line. We also need a fire hydrant out there.  There isn’t one out there now,” explained Village Board President Alan Michl.

The next agenda item was the summer help applications.  They received nine applications for lifeguards and one from Anna Sluka to be the pool manager.  The board opted to hire as lifeguards: Alexandria Wallace  Jamie Renshaw, Draven Payne, Troy Kallhoff, Emma Olsen, Jaiden Papik (assistant pool manager), Cameran Jansky, Andrew Vavra, and Savana Horne.  They hired Sluka as the pool manager.

The board scheduled the dumpster for the village clean up on May 14.

The village received the swing set for Gilbert’s park that was ordered two years ago.  The board approved the invoice of $1996.39 which also came out of community betterment keno fund.

The board approved the ordering the fencing and plan to ask several organizations to help fund the project.

Mueller is hoping to move the gazebo and the swing from the nursing home to the old tag factory lot and asked the board for their recommendation on placement on the empty lot.  They advised him to put it where it worked for him to mow around.

The next meeting was set for April 5 at 7 p.m. at the Village Office.

Mr. Brian Murphy’s Social Science Classes at Exeter-Milligan have been covering a wide variety of topics this semester.  Currently, the Post World War II History class is just getting started with a unit covering the 1980s.  The class spends a great deal of time discussing current events and how earlier events have influenced our world today.  Post World War II History looks at events from both world and American perspectives.  The American History class recently completed a chapter on the early Cold War.  We are now starting a unit on 1950s culture.  World History is just completing World War I.  During class discussions, an emphasis is placed on perspectives of other nations and how these influence major events that follow.

The Exeter-Milligan gymnasium was host to this year’s jump rope for heart event.  Physical Education teacher Mrs. Darcy White holds the event every other year to get the elementary students moving.  This year she brought her jock jam music to keep the ropes and the students moving.  The elementary students at the Exeter site, (kindergarten, first and second graders) were mentored by Exeter-Milligan high school students who spent their period teaching the kids how to jump rope and use the ropes for different exercises.  The students are still accepting donations for the American Heart Association event, ”It takes a Heart to be a Hero.”

Celebrating their own birthday inspired twins Ashley and Meghan Miller to donated blood on their 17th birthday.

According to Doris Hall, the Exeter Bloodmobile coordinator, “We did have a very good turnout. Everything worked out good that day.”

“We beat our quota by five pints.”  With 37 pints of blood the Exeter Red Cross Bloodmobile was deemed a success.  The ladies from the United Church of Christ served the lunch and manned the kitchen.

Greeting donors were Erma Adamson, Evelyn Michl and Elva McBride.  Escorting donors were Ginny Adams, Carol Shaffer and Kathleen Wilbeck.  Those who assisted in the loading and unloading of equipment were Alva Smith, Sterling Dyer, Dan Manwarren,  and Adam Erdkamp.

Richard Minor Nicholas was born on February 26, 1934 to Thomas and Marjorie (Richardson) Nicholas in Laurel, Montana. He passed away on Sunday, March 6, 2022 at the Fillmore County Hospital in Geneva, Nebraska at the age of 88 years and 8 days.

He grew up in the Laurel area and spent several summers working in the nearby Yellowstone National Park. He graduated from Laurel High School in 1953 and enlisted in the Air Force in 1954. His Air Force buddies called him “Nick” and the name stuck with him for the rest of his life.On April 1st, 1956, one of Nick’s buddies introduced him to the love of his life, Doris Harre. They married in 1957 and had 3 children: Shari, Tim and Hope. The family lived the Air Force life and were stationed in Lincoln, Tampa, Florida, Tucson, Arizona and Alamogordo, New Mexico before Nick retired in 1974. Nick was deployed several times during his career, including tours of duty to England, Vietnam, the Philippines, and Thailand. He was honored with the Bronze Star to recognize his exemplary service during his tour in Vietnam.Nick moved his family to Exeter in 1974 where he worked for Erdkamp Construction for a short time. He then became Maintenance Man for the village of Exeter for the next 20 years. After retirement, he enjoyed helping his friends Gerry and Vicki Geiger with harvest. The best part of the day was the “safety meeting” when the work was done!Nick was a member of St. Stephen’s Catholic Church in Exeter. He and Doris spent many hours helping with the recent church renovation. He also crafted the wooden nativity scene displayed in front of the church and looked forward to setting it up each year. He was a member of the American Legion and a former Commander of Exeter American Legion Post 218.Nick loved the outdoors, with hunting and fishing being his favorite pastimes. He made several trips to Canada to fish with one of his favorite fishing buddies, his nephew and good friend Glen Coffey. His daughter Shari and grandson Nathan were lucky enough to take a turn going along. He loved gardening and was especially proud of his flowers, planting multiple gladiolas and dahlias as well as a vegetable garden up to last year. Nick was also an avid “rockhound” and loved to collect rocks to polish and make into jewelry. He had a love of frogs and he received many frogs from family and friends; his collection currently stands at 1,973. One of the highlights of his life was being featured on the “Lance’s Journal” program on Channel 10.Nick’s pride and joy were his wife, his kids, grandkids and great-grandkids. He was able to celebrate his 88th birthday while in the hospital recuperating from a stroke and a broken hip. During the party, he pointed at the group who were there with him and said “Mine- all mine!!” He loved people and loved to visit; he will be remembered for his sense of humor and love of frogs, whiskey sours and funny t-shirts!Nick was preceded in death by his parents; stepfather Celester Goman; and infant granddaughter Theresa Katherine Michl.He is survived by his wife of 65 years, Doris; children Shari (Alan) Michl of Exeter, Tim (Marie) Nicholas of Central City, and Hope (Ken) Strate of Exeter; grandchildren Allison (James) Bitz, Nathan (Abby) Michl, Matt (Jenny) Nicholas, Angela (Noah) Broekmeier, Deidre (Noah) Boyle and Victoria Androyna; great-grandchildren Evie and Jonah Bitz, Cason Michl, Leo and Layne Nicholas, and Oliver and Amelia Broekmeier; sister, Sharon (Don) Grove of North Fork, California; sisters-in-law Leona Smith, Jeanette Paulus, and Evelyn Coffey; brother-in-law Frank Harre; and many nieces and nephews and his beloved cat, Angie.
Posted by Leesa Bartu at 7:30 AM No comments: 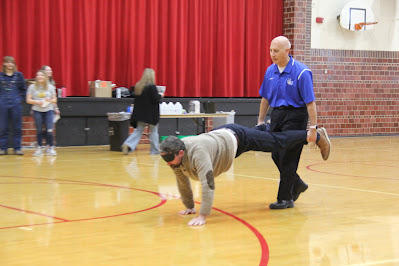 Exeter-Milligan/Friend FFA officers held a pep rally to encourage students to participate in FFA.  Exeter-Milligan 6th-8th graders along with the FFA members traveled to Friend to participate in the pep rally.  Students were chosen to bob for apples, run an egg and spoon race across the gym, catch a marshmallow on a string with a partner, the wheelbarrow race and hold a jug of water up (great job Logan Krupicka!). 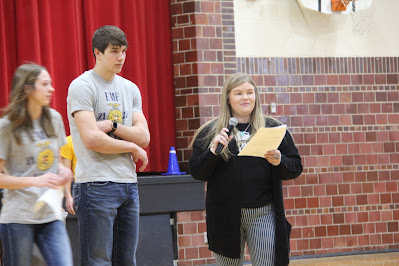 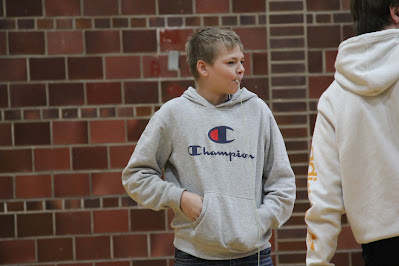 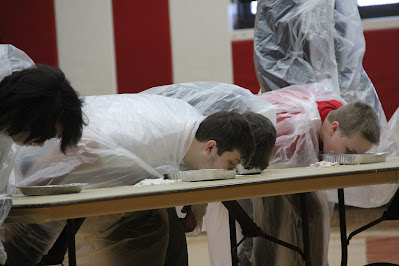 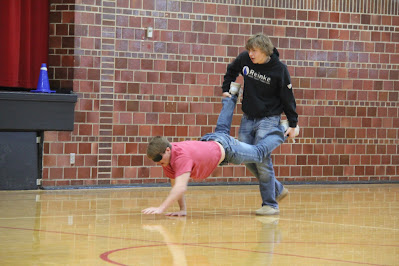 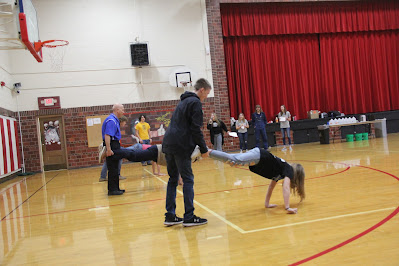 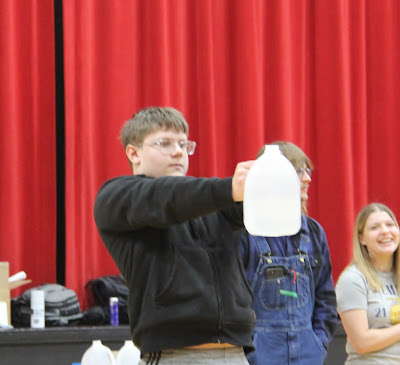 A Funeral Mass for Nick will be held on Thursday, March 10, 2022 at 10:00 a.m. at St. Stephen Catholic Church in Exeter, Nebraska. Father Brendan Kelly will preside over the Mass.

A Graveside Service with Military Honors will be held in the Exeter Cemetery following the Funeral Mass.Public Visitation will be held on Wednesday, March 9, 2022 from 1:00 p.m. to 7:00 p.m. at Farmer Funeral Home in Exeter.A Rosary will be prayed on Wednesday, March 9, 2022 at 7:00 p.m. at Farmer Funeral Home in Exeter, Nebraska.Memorials are suggested to the St. Stephen Catholic Church or the to the family to be designated at a later date.
Posted by Leesa Bartu at 5:45 PM No comments: