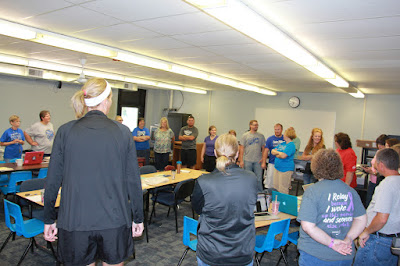 Exeter-Milligan teachers gathered in the old computer room first thing Wednesday morning for their first of two in-service days before the new school year begins on Friday.
Posted by Leesa Bartu at 9:05 PM No comments: 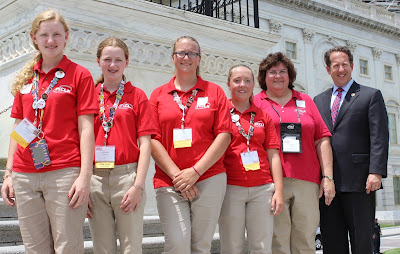 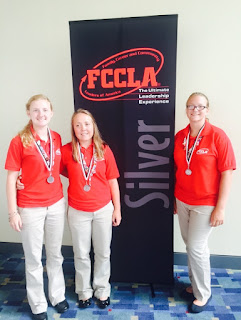 Silver Award winners at the National FCCLA Conference are from the left Hannah Horne, Katie Mounce and Kayla Bonds. 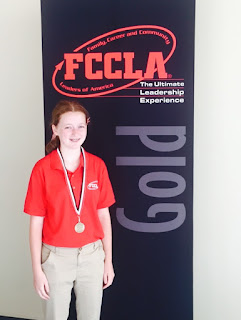 Building teamworking skills, learning communication methods, problem solving and networking are just a few of the skills that members of the Exeter-Milligan Family, Career and Community Leaders of American are learning.

Four of the club members, accompanied by their advisor, Mrs. MaryLou Vossler, presented their projects at the National FCCLA Conference in Washington, D.C. this summer.  The theme was “Together We Are Healthy” and attendees were challenged to explore the fitness of body, mind and spirit that is a product of healthy attitudes and habits; and to pursue this whole health through the conference’s great learning and networking opportunities.

Three ninth graders, Hannah Horne, Kayla Bonds and Katie Mounce presented a Students Taking Action with Recognition (STAR) projected entitled “Electronics Down.”  The girls developed this project to encourage families to understand the importance of taking a break from their electronics and focusing on family time.

The students presented a tri-fold display board accompanied by a 10 minute presentation that each of them spoke during.  They overwhelmed the audience with the facts they shared about the prominence that social media has gained.  The team shared tips on incorporating family time along with the results of the survey the gave to Exeter-Milligan students about how much time they spend online. They received a silver medal at the National Conference.

One seventh grader, Caitlin Murphy, also presented a STAR project titled, “From Rags to Rugs.”  In the recycle and redesign category, Murphy was able to take a discarded item and make something new and usable.  She chose 19 t-shirts and created a 20” x 29” crocheted rug which included handmade t-shirt flowers and hand and machine sewing.

During the conference she presented her rug and gave a 5-minute oral presentation along with a tri-fold display board.  Murphy received a gold medal at the National Conference.

The students work on these projects throughout the year and then present them at a district competition and if chosen, participate in a state-wide conference.  Horne noted, “The hardest competition was at state because you had to do well to get into nationals. At nationals there was a lot more competition but you are competing against the rubric instead of everyone else.  It was still very nerve-wracking.”

Mounce commented that Nationals was, “very intimidating when you walked in because there were so many people presenting at the same time, but the judges listened to us and interacted with us.”

After their presentations the judges had time to ask them questions and the team of Mounce, Horne and Bonds were asked about the size of their school and community.  When they explained the size of the school the judges wondered if they had internet and electricity and got a shock when they learned how technologically advanced Exeter-Milligan is with the one-to-one laptop initiative.  “We wanted to tell them that we lived in sod houses,” said Bonds.

Traveling that distance on a plane was a first for several of the students.  Having the National Conference in the nation’s capital was a bonus for all of the Exeter-Milligan contingent.   Vossler noted, “It was probably better organized than the other conferences I have been to and there was so much that the kids could experience.  There were more learning opportunities that the kids could use as citizens of the United States.  Not only did they get the experience of the conference, they also got to see where laws are made which helped it become more relevant to them.”

One of the special events planned for the Nebraska contingent was a tour of the national monuments by moonlight.  The students had held a family movie night at the school as a fundraiser and this helped raise funds for the tour.  Every one of the student participants commented on this experience, “The monuments were beautiful lit up at night,” explained Mounce.

Part of the conference was meeting some of the 8,000 participants by trading state pins.  Each of the girls started with 25 Nebraska FCCLA pins and enjoyed trading pins with the other participants.  Horne was pretty excited about trading for a Virgin Islands pin, “We got kind of competitive.  We wanted to see who could get the most interesting, farthest state.”

The participants and Vossler felt that a highlight of the conference was a youth rally held on Capitol Hill for the dual purpose of celebrating the organization’s 70th anniversary and advocating for strong Family and Consumer Sciences (FACS) education in schools. Themed, “70 Years Strong,” the event drew more than 3,000 FCCLA members and bathed the Capitol grounds in a sea of FCCLA red.

After the rally, Exeter-Milligan members moved into the Capitol to meet personally with Congressman Adrian Smith to share their experience at Nationals, and discuss their STAR projects.  The group was also treated to a tour of the Capitol by a member of Smith’s staff.  Vossler was very impressed with Smith’s knowledge of the education system and spent some time advocating the importance of Career Technology Education  (CTE) organizations and the impact that they have today’s youth and their communities.

For Horne, FCCLA is making an impact in her life now, “FCCLA has helped me to interact with people easier.  This is my third STAR project.  I have learned a lot about speaking in front of people.  Participating in FCCLA has made me realize how much I want to help people and not be so selfish.”

Bonds has seen growth in herself just this year, “When we went to districts I was really frightened and by the time we went to Nationals I didn’t really care.  I am looking through ideas for my next project.  I am motivated to do this again.”

Vossler enjoys watching the growth of her student participants, “They get out of their comfort zone.  They step outside the box and they do it because they get to choose their own topics to bring an awareness of something.  By choosing the topic they can go way out or do something because they feel strongly about it.  Sometimes it’s the meekest girls that tend to be my strongest.  There is ownership because they have chosen it.”

“It gives the kids that are involved an opportunity to serve others, to build team working skills, communication, problem solving, and allows them to network with other schools within our district. FCCLA provides them with an opportunity to gain some life skills and be competitive outside of the sports realm.”

Vossler has seen the impact of FCCLA not just on the students who participated in the National Conference but also on the community, “Through their involvement they not only become better well rounded young adults they become better community members because they understand the importance of giving back.”

The Exeter-Milligan FCCLA chapter has a strong sense of giving back.  This year they plan to host a pink out in addition to their annual trick or treat so others may eat.  Twice a year they do a roadside clean-up and host the chamber of commerce Easter egg hunt.  The students are also involved in clean-up after sporting events.  Vossler summarized, “We want to do things to make our communities a little bit better.”