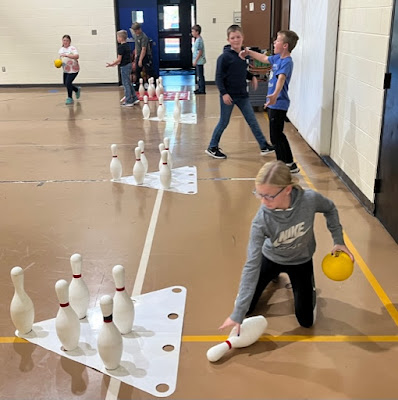 pictured are Gracelyn Becker cleaning up the pics while Liam Capek and Archer Kanode discuss how the next shot should go.

High School students have been doing the major sports units of Soccer, Football and Volleyball.  Sophomores are asked to study and present on the areas of history, rules, positions and skills for each unit.  They work in groups to collect the information and then do presentations for their class once they have put their slide show together.  They have also had the opportunity to play each sport.  We took advantage of the great weather we had this fall to be outside as much as possible.

Below are Lynn Jurgensen and Kora Havel waiting for the next roll; Liam Capek, Crosby Oldeheft, and Tommy Kallhoff reset the pins. 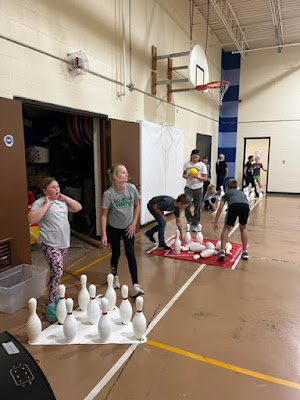 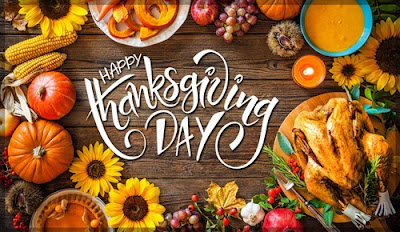 
The Exeter-Milligan FCCLA Chapter also conducted their annual "Trick or Treat so That Others May Eat" food drive in the Exeter and Milligan.  Through the generosity of both communities, we were able to collect approximately 598.5 lbs of non-perishable food items.  These items will be shared with the Fillmore County Blue Valley Food Pantry and Mike Smith-Skate for Change.

Something parents never think they will hear is, “Can we go back to school tonight for Family Math? Family Math rocks!”

This year they held four sessions, two at the Exeter site and two at the Milligan site.  Each session was an hour long and “is a program to help parents and students become more aware of the need for mathematics and the options it opens for young people,” explained Weber. “It focuses entirely on parents and children learning mathematics together.”

Each session was comprised of selected activities for children ranging from kindergarten to sixth grade. Strategies used to complete these activities varied by ability and age. Along with the group games and activities, math centers were made available for those wishing to explore other math activities.

It was a hard fought battle with the Timberwolves leading at half-time but in the end Elgin Public/Pope John took the win 40-14.  Congratulations to the Timberwolves on an amazing season and silver medals.  Word in the E-M halls is that a new hardware trophy case is being ordered.

The University of Nebraska-Lincoln recognized top Nebraska high school seniors for their academic excelleence October 30 at the 2012 Distinguished Scholars Recognition Dessert Reception.  These distinguished scholars have demonstrated a high level of ability and a strong commitment to superior performance in academics as indicated by their class ranking, combined with their ACT or SAT test score.  All Nebraska National Merit semifinalists, National Hispanic Scholars and National Achievement SCholars were also recognized.
The Distinguished Scholars Regonition dessert reception at the Nebraska Union culminated a full day of events for the scholars.
Distinguised Scholars Day gives students the opportunity to learn more about the academic programs offered at UNL through the University Honors Program.  Students and parents learned about the numerous academic opportunities for students at UNL ranging from research to international experiences to campus resources.
Exeter-Milligan students honored were Blake Papik and Jennifer Pribyl. 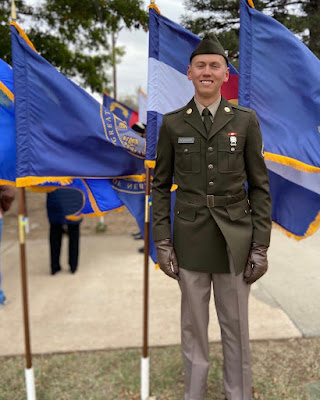 Private First Class Oldehoeft is the son of Jason and Jill Oldehoeft and a 2021 graduate of Exeter-Milligan High School. 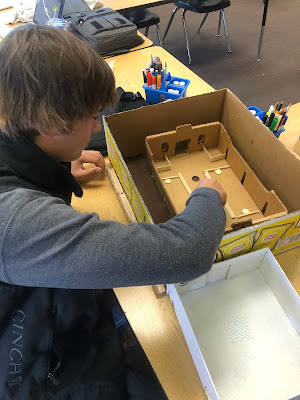 Animal Science class has been learning about space requirements needed to produce livestock. For their final project, they were tasked with designing a blueprint of animal housing for a species of their choice and creating a scale model of the facility. Facilities produced included a feedlot, a swine confinement, a sheep barn, and a horse stable. Pictured is Cade Kresak working on his cattle model.

The other Ag & Shop classes are also off to the races for 2nd quarter. Welding class has been setting up the new equipment and watching demonstrations from industry professionals to learn different techniques for the welding processes. The Plant Science class has been researching what affects plant growth and experimenting on pansy flowers with different temperature, light, and water variables. Agribusiness students are wrapping up their financial recordkeeping unit by reviewing concepts related to balance sheets, income statements, and budgets. The 8th grade Ag class learned about natural resources in agriculture by creating "edible soil layers" and participating in a non-renewable resource simulation with water and crackers in class. The EMF FFA chapter served meals to farmers during harvest, attended Husker Harvest Days, and held a pumpkin painting contest at the October monthly meeting. FFA members are currently starting to prepare and practice for the Leadership Development Events contest held in January.

The 3rd grade students at Exeter-Milligan were excited to receive their own dictionaries from Beth Vavra. A huge thank you to the Boosters for making this purchase!

Pictured are the 3rd graders with their dictionaries: