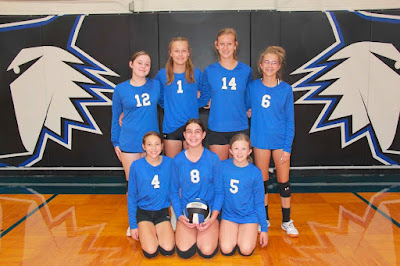 The Exeter-Milligan Junior High Volleyball team ended their season on Saturday, October 16 with a loss to the Cross County Cougars in the Crossroads Conference Championship game held at York High School.  They finished their season with a record of 12-4, with three of those losses being to Cross County.  Their only other loss came at the hands of Sutton in the Friend Tournament.  They had wins over BDS (twice), Dorchester, Meridian (three times), East Butler, Friend (twice), McCool, Giltner, and Lawrence-Nelsen.  Great job girls!  It was a fun season.