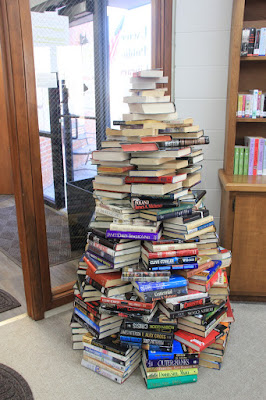 The Exeter Public Library has a very appropriate tree for the holiday.  Librarian Lynette Trauger created this Christmas tree out of books.  You can peak in the Village building window to see the display as the office is closed due to the COVID-19 virus.  The library is open regular hours for curbside pick up only.  Trauger will have several Christmas crafts available for pick up and also has a large variety of holiday books and DVD’s available for check out. 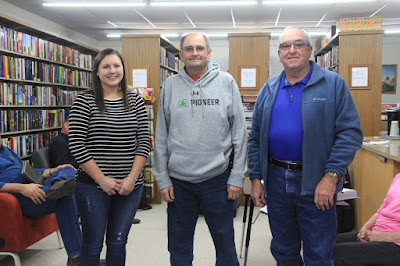 New Village Board members pose with Chairman Alan Michl after taking their oath of office.  From the left:  Kimberly Gloystein, Alan Michl and Bob Mueller 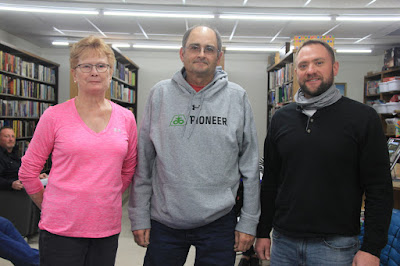 The Exeter Village Board met on Tuesday, December 8 across the hall in the Village Library to maintain a social distance.

After the bills and minutes were approved the board thanked Mitchell Schlegelmilch and Kathy Erdkamp for their years of serving on the board.  Chairman Alan Michl presented several gifts from the village to the retiring members.

Newly elected members Kimberly Gloystein and Bob Mueller along with reelected member Michl read the oath of office together.

The board approved Resolution 20-05, the year-end certification of the street superintendent.

The board discussed the situation with the resident who has been notified to remove construction equipment that is parked illegally in town.  Based on advice from the village attorney the board will have to notify the landowner again before towing the equipment.

Village Marshal Sean Gray gave his report which include an overview of a possible contract with the city of Friend to provide more regular police coverage.

Gray shared with the board an outline of what the formal contract with Friend would look like and how it would benefit Exeter.  According to Gray, “Friend would take care of the payroll and administrative costs and in exchange Exeter would get a guaranteed number of hours of coverage.”

Gray added that the nuisance process would be streamlined with regular police hours. He noted that the plan included a third officer who would help patrol Exeter.

Michl responded, “We will have to pull some figures together and look at the outline.”

It was noted that the Friend officers only spent 150 hours in Exeter last year with a cost of just over $5000.

The board made no decision on the outline and Michl noted he would discuss the outline further with the Friend mayor.

The board moved on to Village Maintenance Supervisor John Mueller’s report.  Mueller noted that the new water meter system estimate was $16,000. “It’s to the point where we need to start replacing meters, too.”

The board discussed how a changeover would happen with billing and support and also briefly discussed water rates and a rate study. The board opted to do some investigating on the costs of the new system before making a decision.

Mueller reported that the bid for the new lawn mower was $16,100 with an additional $3800 for a deck.  There would be an allowance of $4000 for the trade in of the old mower.  The board voted to purchase the new mower.

The board set the next meeting for Tuesday, January 5.

Posted by Leesa Bartu at 8:04 AM No comments: 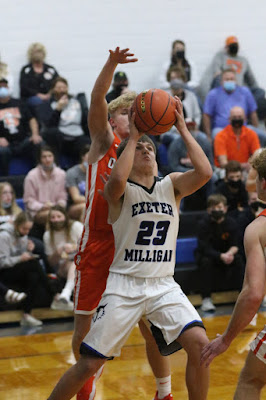 Exeter-Milligan gave the home crowd a thriller Friday night in Exeter- unfortunately the ball dropped just right for Osceola in the fourth quarter.  Timberwolves go to 0-2 with the 54-55 loss at home. 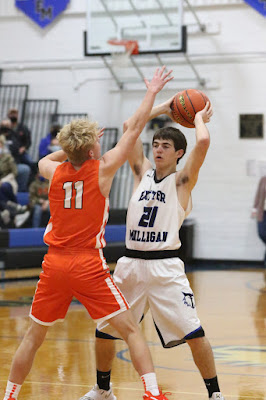 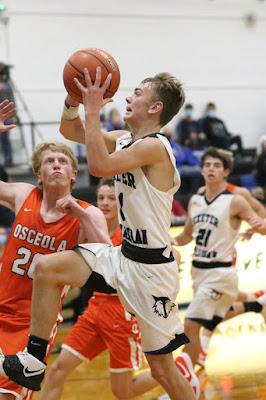 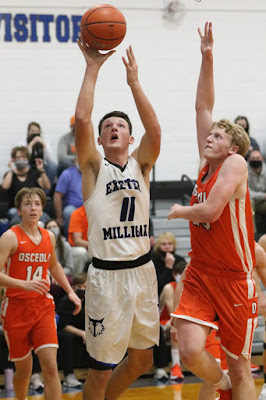 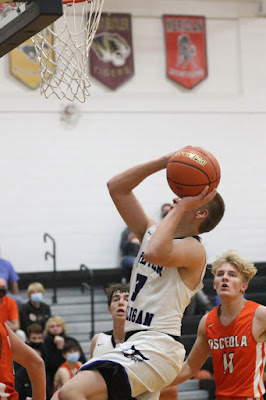 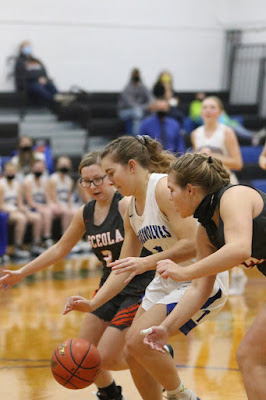 Exeter-Milligan had no problem containing the Bulldogs in their home opener in Milligan on Friday night.  Final score was 50-35. 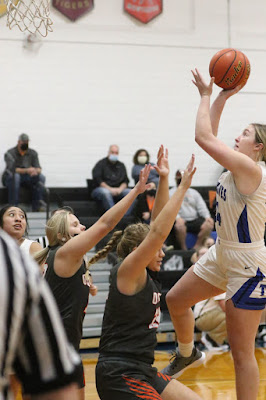 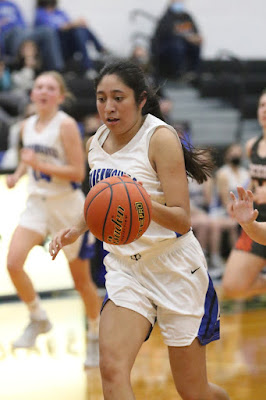 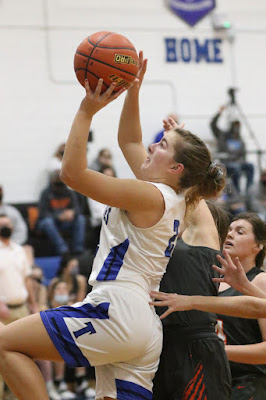 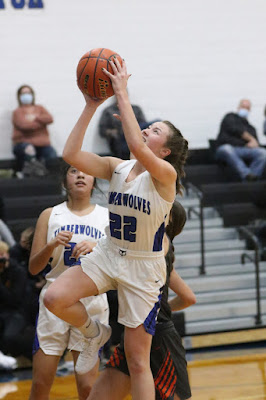 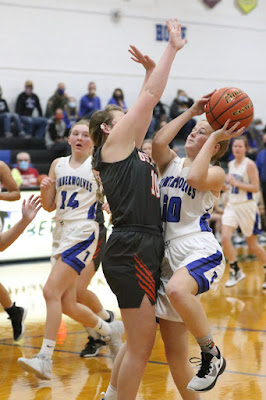 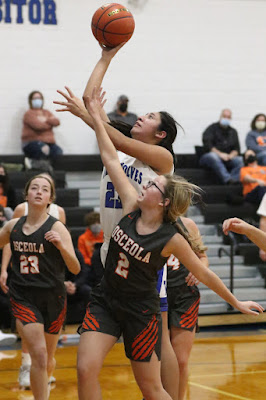 The 6th graders at Exeter-Milligan are off to a great start this year! While this year has brought about some new challenges, I have really been pleased with the effort and resilience of every student. Throughout a typical school day, the students participate in lessons and activities in spelling, reading, math, language, science, social studies and writing. Roughly half of the subjects are taught in the morning, while the remaining subjects are covered in the afternoon. The 6th graders have learned a wide range of content thus far, including engineering, ancient history, geography, arithmetic, geometry, grammar, the writing process, and much more.

Students also regularly take part in physical education, art, band, choir, guidance, library, and keyboarding. Even though students are often busy learning many different academic skills, we are also focusing on developing many social and organizational skills that will help prepare them for the Junior High level. The sixth graders have also had the privilege of being involved in a few fun activities so far this year, such as Red Ribbon Week and homecoming festivities. As you can see from the pictures below, the students really enjoyed being able to dress up for homecoming week.

One of the students’ favorite assignments so far this year was to design a bicycle helmet model. The objective was for students to use the engineering design process to build a bicycle helmet that would protect an egg from breaking upon impact. Students were given specific criteria and constraints, and then provided time to plan, build, and test their prototype. Currently, students are using a similar process to design a model car to see which design can travel the farthest. This will be another class favorite! 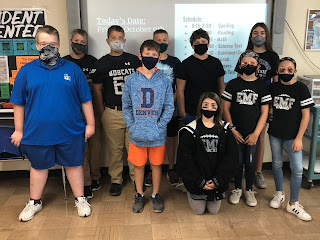 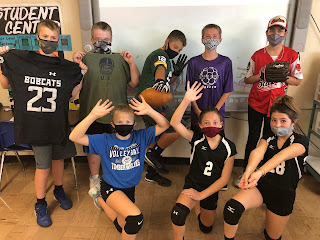 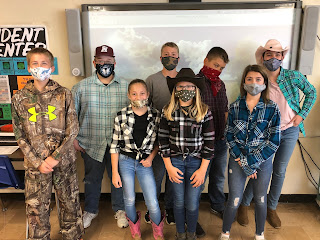