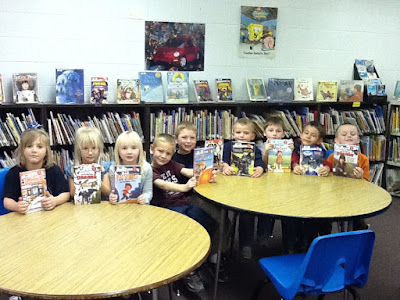 The Exeter-Milligan Kindergarten students are holding popular books from the library. These books have special attraction because the children recognize the characters from TV and movies. Marly, Amelia Bedelia, Super-man,and Spider-man are some of their favorites.

Posted by Leesa Bartu at 8:30 AM No comments: 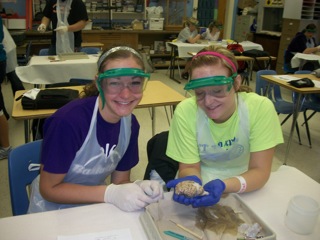 Got Brains?  Jennifer Pribyl and Megan Zwickl show off their brain in Ms. Lorie  Sliefert's Biology II class.   Students recently finished a unit on the Nervous System where they dissected sheep brains to learn the various parts of the brain and their functions.
Posted by Leesa Bartu at 8:00 AM No comments:

Helen Waring Johnson of Geneva, entertained the group with her "Helen's Many Musical Hats" program.  Hats complimented the song medleys she sang.  Also, beautiful old piano selections were played by Delores Bailey of York, as part of the program.

A delicious lunch of varied desserts was served in the Fellowship Room, with decorations in bright pink, with black tableclothes.  Hostesses were Loryne Moore, LaVonnie Guthrie, Roma Rhodes and Sandra Horne.
Posted by Leesa Bartu at 7:08 PM No comments:

All three Exeter-Milligan School Board have filed for relection.  They are Annette Gloystein, Tim Pribyl and Jim Zeleny.  Also throwing their bid in for school board this year are Becky Bigelow and Rhonda Korbelik both of Milligan.  Since there are only five candidates running for the three positions they will not be listed on the primary ballot. Rob Androyna has also announced he will run as a write-in candidate.
Posted by Leesa Bartu at 10:26 AM No comments: 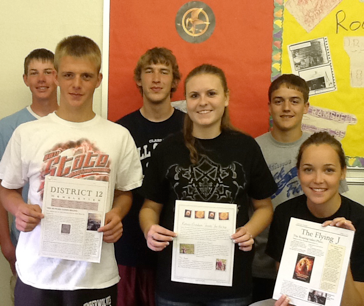 In between prom, track, golf, and sending out graduation announcements, seniors in the dual-credit English class at Exeter-Milligan High School are devouring the hot new best seller, The Hunger Games.  After conquering A Tale of Two Cities, and analyzing books on the American Library Association’s list of banned books, they are devouring the story of survival in a surrealistic world of the future.

As they read, they also wrote and edited their own newspapers about events in Panem. Each edition featured a news item about the events of the games, as well as articles from other sections found in most newspapers. Here are some of their reflections:

Arts & Entertainment – How real is Reality TV? The Hunger Games are the “Reality TV” of the future.  How is the televised Hunger Game similar and/or different from the reality TV games of 2012?
·       Becca Vossler: I think “Reality” TV is not real at all. They are just putting on a show to entertain you, or what else is the point of a TV show? They have people saying “say this--not that!” or “wear this--not that”. They do the same thing in the yearly games, but they publicize those people, not hide them. They are very similar in the aspect of how people help them perceive the image they want shown.
·       Brady Bristol: The Hunger Games played out in this book are like today’s Reality TV.  In most TV shows, people win money for lasting the longest, such as Survivor, Fear Factor, or Big Brother.  In The Hunger Games the contestant that lasts the longest is the only one that will keep their life.  It is a very brutal twist to a TV reality show. If you have ever seen the movie The Tournament, it would remind you a lot of the Hunger Games.  They use basically the same story line, except they use criminals instead of children.  They give them each tracking devices so they can hunt the other competitors.  It is a very violent show, but the public is able to watch it on television and bet on which player will win.  Reading The Hunger Games often puts a picture of The Tournament into my mind.

Opinions & Editorials – What is Suzanne Collins message? This story is set in a world where the government forces children to be sacrificed in a violent way.  Writers often create hyperbolic, thought provoking stories to reveal flaws in our world. What message do you think the story’s creator is trying to express with this dark tale?
·       Claire White: I think the writer is exaggerating the political issues of our time. The government of Panem is overwhelming, controlling, and completely eliminates freedom. In Panem, the citizens are kept in districts surrounded by fences. They are told when to start and stop working each day, they are not allowed to do or say anything against the government. Peacekeepers live in each district and monitor the citizens. Katniss and her family almost died of starvation because it was so hard to make money and buy food. I think it shows that big government will only lead to a failing, terrible country in the future portrayed by Suzanne Collins.
·       Jalen Maxson: I can definitely see how the Capitol keeps a strangle hold on the entire country of Panem. The games themselves play with their citizen’s lives for entertainment. Adding a fire during the game, to speed up the process of kids weeding themselves out, is cruel and insane anywhere it happens.

Business & Economy – What are the major industries of Panem? - We know that District 12 survives on mining coal, but what other industries support the other districts.
If you are a fan of The Hunger Games, we hope you will enjoy reading more about the games. We also hope that those, who haven’t yet read the book, will want to read the book for themselves. We guarantee you won’t be able to put it down!

Posted by Leesa Bartu at 8:00 AM No comments: