After taking care of legal procedures, the Exeter Village Board dove into their annual budget hearing on Tuesday, September 8th. One member of the public attended the meeting, which was open to the public as all meetings are.

Rachel Jacobsen, from the accounting firm Mireau and Co., presented the 2009-2010 budget to the village board and fielded questions from board members and the public.

Chairman Alan Michl noted that the bond payments for the pool will only be interest the first two years and then in 2012 will be $110,000.

When a question was raised about the possibilities of property tax going down, Michl pointed out the county assessors office has recently reevaluated property in town resulting in a $800,000 increase in values in the village, “While there has been a slight decrease in the levy, property valuation has gone up,” said Michl.

Several board members had questions on the additional amount in the reserve of the budget, which Jacobsen explained, “given economics right now it was a good idea to bump up the reserve. If you have some sort of catastrophe in town you have the budget padded for it. We underestimate the revenue and overestimate expenditures.”

When there were no further questions from the audience or board members, the hearing was adjourned and the board started the special meeting in which they passed the resolution to adopt the budget and request $136,000 from the county in taxes.

Posted by Leesa Bartu at 5:08 PM No comments:

Village grass and tree pile not a dump 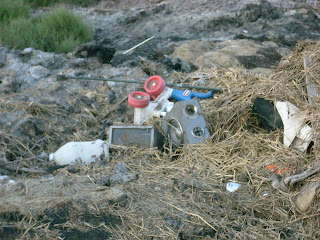 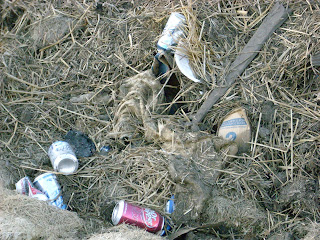 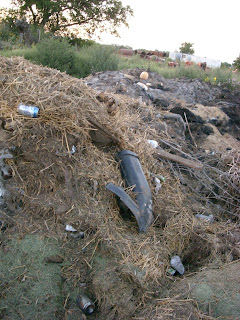 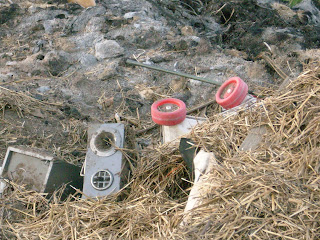 While the grass and tree dump has at times been a little messy, recently several board members paid a visit to the area because of a rash of illegal dumping.

The grass pile is provided free of charge to residents of and is for grass and tree branches only. A recent dumping left all kinds of beer cans, children’s toys, mower parts and other trash at the pile. Another pile of grass contains wire mesh wrapped throughout the grass.

Another cause for concern to the Village Board is the frequency of fires at the grass pile. One of the piles of grass was recently set fire by someone and twice this year the fire department was there putting out the fires before they got out of hand.

Chairman of the Village Board Alan Michl, explained that the “once the grass has composted the village puts it into their manure spreader and places it around the sewer lagoon. When people bring their junk out to the pile along with their grass and trees it starts jamming up and breaking the manure spreader.”

The village is not required to provide this spot for community members and so they ask dumpers to be courteous in their use of the grass and tree dump. Please remember to back up all the way to the grass pile and dump your load and not leave it next to the road. Also, this area is for grass and tree branches only, most of the trash services in will pick up large items with prior notification and the village always hosts the spring cleanup dumpster for other large items.

Posted by Leesa Bartu at 4:55 PM No comments: