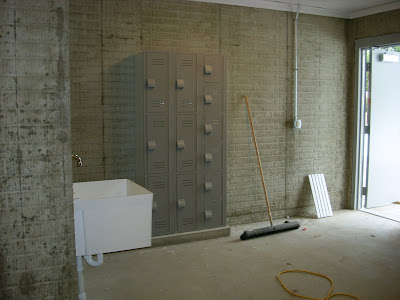 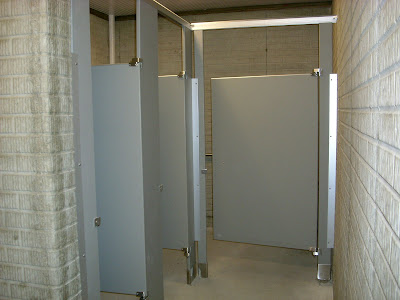 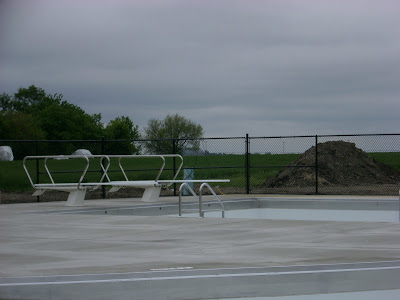 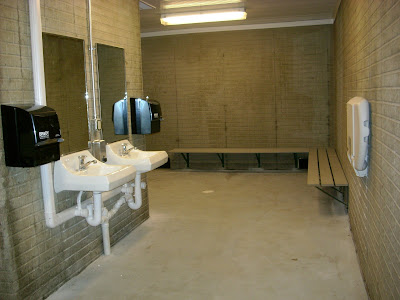 The diving boards are installed.

The fixtures are all in the bathrooms now, the stalls are up and the showers are ready. The porta potties are gone since the plumbing works in the bathhouse now.

There are lockers installed outside the bathhouse in the pool area and also inside the main area of the bathhouse.

After these pictures were taken most of the extra piles of dirt were removed.
Posted by Leesa Bartu at 9:31 AM No comments:

At the recent alumni banquet, Hans Nelson a member of the class of 1949 shared some of his thoughts about Exeter and has graciously allowed them to be posted on the website:
Sixty years ago twenty one seniors graduated from Exeter High School. The “forty niners” we called ourselves. The majestic Eagle, a symbol of our country, was our mascot.
It has been said that you can take a person out of the community in which they were raised but you can’t take the community out of them. We all can remember our historical roots. I want to thank all the town fathers and mothers who gave to each of us, so much, in so many ways. As such I think of the businesses, school districts, and neighbors. Believe me what you did has stayed with me over the years!
We lived in an era where there could be ten communities in every county and now a community could be an entire county if not more. We lived close to the confluence of Saline, Fillmore, York and Seward counties which was a great blessing. I received so much from Cordova where I went to church, Fairmont, McCool, Waco. Grafton, and Seward. I remember with fondness the dances in Burress as well as the delicious kolaches in Milligan. Geneva was our county seat. York and Friend had sale barns and hospitals to which we went. All of these communities were small but small is beautiful. I have lived in small communities almost all my life and while I no longer do, I miss them.
We remember our class mates-we were twenty one who graduated. There aren’t any one of us living there now. We have all left. Eight of the original twenty one are buried in Exeter and Cordova. My plans are for burial close to my grand parents, parents, aunts, uncles, and cousins in the Zastrow Cemetery near Cordova. I will be returning to my roots so to speak. Ten of the guys in our class served in the military service. Dale Rasmussen gave the ultimate sacrifice for our Country as he died as an instructor of airplanes in the early sixties.
As we gather together on May 23rd for the alumni banquet in Exeter of this year, our number will be smaller than it was in 1949 but all will be remembered by name and in memories.
Of the 21 we graduated with four were Beckers Lela Ann, (attending), Bert, Alice (attending) and Gaylord (attending). There were two Harres-Matt and Jerome. There were two Kaedings-Ila Jean and Josephine. Ila Jean Kaeding was later to marry Jim Harre which makes 3 Harres.. There were two Erdkamps-Richard and Rose Marie (attending). There are three spouses attending-Marilue Becker, Robert Lovegrove, and Bethine Lief.
There were four Danes-Richard Thompsen, Dale Rassmussen, Keith Nielsen and myself. Three live out of state-Keith Nielsen, Richard Rayer, and Bert Becker. One of us still lives in Fillmore County-Shirley Dyer Lovegrove.
We remember those who have died-Bob Leif, Donald Chapman, Jerome Harre, Mathias Harre, Richard Edkamp, Dale Rassmussen, Kenneth Wilger, and Richard Thompsen. We think of Cecilia Peschel Powell, and Colleen Kelly Blessing as well. There were 13 guys and 8 gals. Eight have died and 13 are still living.
What I experienced as a boy growing up in this community has stayed with me all my years and I want to thank all the people who made it possible-people whose names are remembered in my and your thoughts.
P.S. I wished I had told everyone about the time we were initiated as freshmen and as the boys left we had to go through a line of senior boys who ringed the school. If we got caught we got de-pantsed. The next morning Dale Rasmussen’s pants hung from the flag pole. Do you remember that? I would like to hear more stories like that, that you remember.
It was the kind of spring day of which Nebraska is famous. It was a little dryer than anyone would want it but I was later to learn it rained from .75 to 2 inches in places, Note the exact amount. 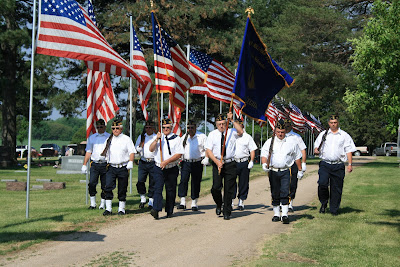 The Exeter American Legion Post 218 hosted the ceremony, posting the colors and offering a 21 gun salute.

Bob Dumpert served as master of ceremonies for the event, while Father Tom Kuffel offered the invocation. Tina Kassik read the Gettysburg Address and Mackenzie Thomsen read In Flander's Field.

Tim Wilbeck, also a Legion member, shared some thoughts on Memorial Day. He began his thoughts with asking the crowd if they felt patriotic and asked "When did you first get that feeling?"

He prompted the crowd to try to remember when they first felt pride when seeing a flag flown, or learning the pledge of allegiance.

He reminded the listeners that in the words of Abraham Lincoln "there is an inadequacy of words" to thank those who have lost their life in service to our country. They truely have "embodied the spirit of united we stand," said Wilbeck.

Wilbeck reminded the crowd that our world again has changed. The post 9/11 world is far different than it was before that fateful day. "Our oceans no longer protect us as we thought they would," said Wilbeck.

Our troops are on a mission. "The call to freedom came and they answered. . .resolved to carry out a mission. It will be won by ordinary Americans making extraordinary sacrifices," said Wilbeck.

The American Legion preamble reminds "to preserve the memories and incidents of our associations in the great wars;" and Wilbeck emphasized the two areas we need to hold on to, pride and purpose. "Let us never forget," said Wilbeck.

He then related the story of Lee Marvin and his service in World War II and how, even though he was an actor he served in the front lines and was awarded a Navy Cross.

After the service, the crowd was invited back to the Legion Home for rolls and coffee provided and serviced by the American Legion Auxiliary.
Posted by Leesa Bartu at 8:29 AM No comments: 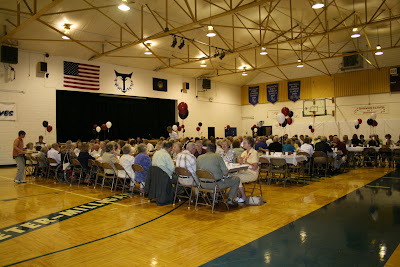 The Exeter-Milligan gymnasium was the site of the 2009 Exeter Alumni Banquet. The class of 1999 hosted the event which included an roast beef supper. Every honor class back to 1939 was represented at the banquet. Earlier in the day an Alumni golf tournament was held with prizes awarded at the banquet.
Each class had the opportunity to have a representative speak for the group. Many introductions were made with several classes taking the opportunity to speak. The 20 year class representative Michael Dinneen introduced the honor classes, but first spoke of the many changes that the Exeter community has seen in the last hundred years and how many more he expects in the next 20 years. He spoke of the great community support that Exeter alumni received as students.
After the awards the group heard a presentation from Alan Songster on the Exeter-Milligan School Foundation. The foundation, through donations and grants were able to give over $15,000 in scholarships this year.
At the close of the meeting Mary Schlegelmilch held the business meeting for the group and then the groups posed for pictures. Many of the classes attended the dance at the Exeter Legion Home. 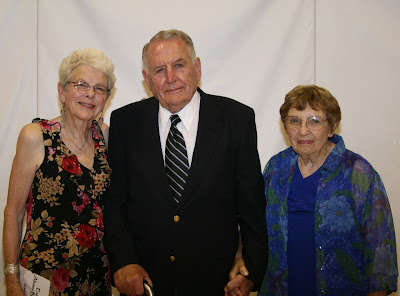 The Exeter High School class of 1939 who attended the 2009 banquet are pictured from the left, Eyvonne (Jensen) Johnson, Joe Kolar, and Vera (Baller) Rauscher. 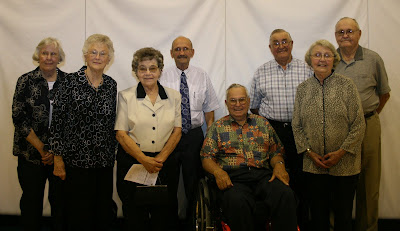 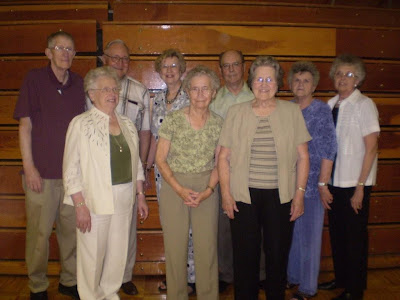 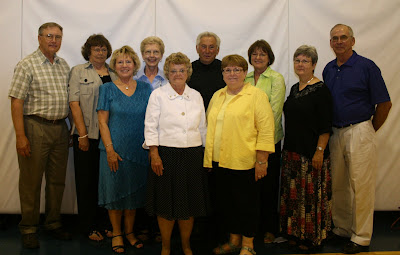 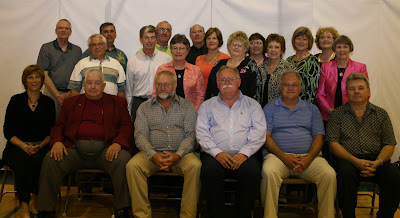 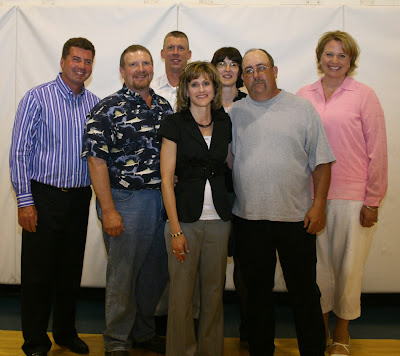 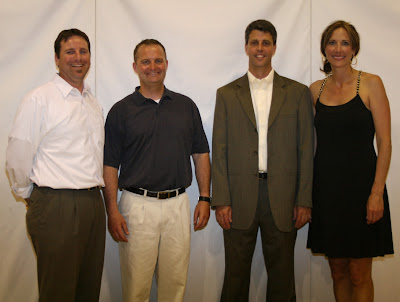 The Exeter High School class of 1989 who attended the 2009 banquet are pictured from the left, Darren Hassler, Matt Manning, Michael Dinneen and Stacey Hall. 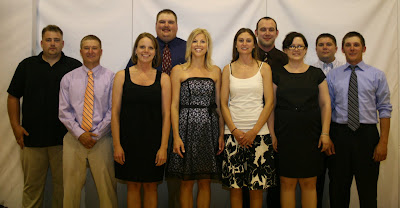