The American Red Cross will have a bloodmobile in Exeter on Friday, June 25th from noon to 5:00 p.m. To make an appointment call Doris Hall at 266-2841 or Ruth Ekeler at 266-8861. All blood types are needed but O- supplies are dangerously low at the blood bank.
Posted by Leesa Bartu at 1:27 PM No comments: 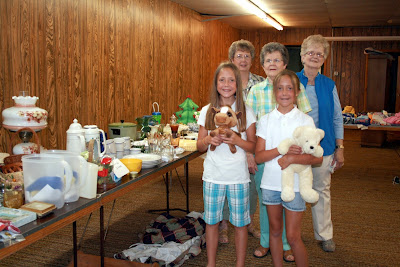 Exeter United Methodist Church Members back row from the left Janice Miller, La Vonne Guthrie and Roma Rhodes along with their helpers in the front row from the left Katarina Mounce and Clarissa Mounce in the middle of the Garment Gadget Giveaway store open in Exeter.

Can you still call it a store if everything in it is free? The whole idea behind the Garment Gadget Giveaway store is to give things away.

The Exeter United Methodist Church members hope to give more away than physical items. They hope to serve anyone in the community by becoming a place that people can stop in and find whatever they might need for free.

The seed for the store was planted when their minister, Jeff Adams, gave a charge that the church should have a mission in the community. They were somewhat stumped until United Methodist Women's Fellowship member Roma Rhodes gave a lesson at a meeting that hatched the idea. It called for an action follow up.

They formed a committee of Rhodes, Erma Adamson and Sherry Mounce to get the store off the ground. The church already had a mission in preparing the backpacks of food for elementary students and felt this would make a great follow up.

Each customer receives a slip of paper that thanks them for shopping in the store and let's them know that, "All items have been donated by members of the Exeter United Methodist Women and community members as part of our mission of love in the Exeter Community."

The store front the store is housed in, is owned by Doug Anderson. "Out of the kindness off Doug's heart we are able to use the building rent-free. Perennial (Public Power District) waived the connection fee to turn on the power, which was great of them," said Rhodes.

So far the ladies have put a whole lot of time, some cleaning supplies and some more time in order to get the store off the ground. Now they are accepting merchandise and keeping their options open for the future.

The store will be open on Friday and Saturday mornings from nine to noon for the next three weeks. There are no set plans for the future but they would like to see the store remain open to serve their mission.
Posted by Leesa Bartu at 1:24 PM No comments: