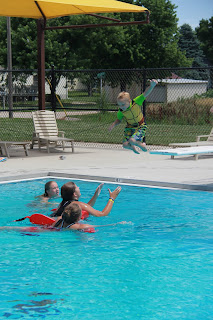 The Exeter Aquatic Center has been offering swimming lessons for the past two weeks.  The pool has been filled with kids from 8 a.m.  Assistant Manager Sara Lincoln has offered the Red Cross certified lessons with other lifeguards assisting her.
Top - In the beginners class the kids had the option to jump off the diving board on Monday morning with a lifeguard waiting to catch them.  Gavin Mueller was already to show his skills in the pool.
Middle -  Three year old Beau Becker had no hesitation when he jumped off the end of the diving board.
Bottom -   Crosby Oldehoeft jumps off the board with style into the arms of lifeguard Ashley Benorden with lifeguard Bailee Stueben swimming nearby. 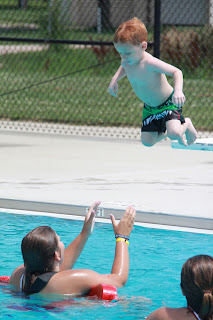 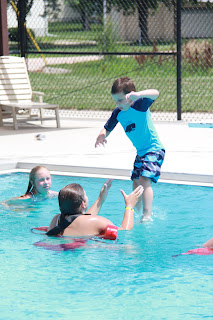 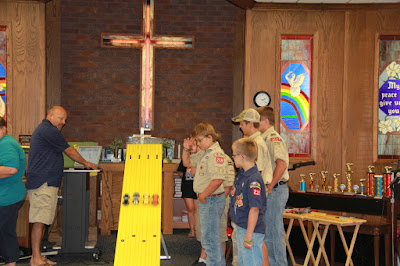 Pastor Jeff Jensen of the Evangelical Free Church in Geneva brought the churches race track and timing equipment for the residents at the Fairview Manor.  He is pictured on the left and the Exeter Cub Scouts and Boy Scouts helped run the race. 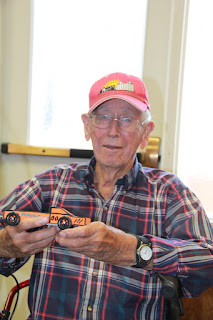 Bob Bettger shows off the pinewood derby car he made for the Fairview Manor Pinewood Derby. 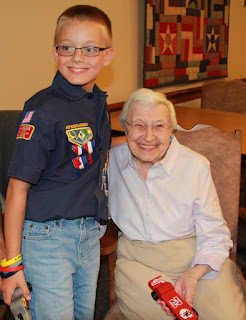 Troy Kalhoff, left, returns Millie Cruse’s pinewood derby car to her after it runs down the track.

Residents and Scouts gathered for a picture after the pinewood derby was over.  Front left to right are residents Mardy Johnson, Millie Cruse (with Katie Jensen on her lap), Helen Hostutler, Cindy Thomsen, Elfie Sent, Ruth Schweitzer and Bob Bettger. Back row are Cub Scouts from Pack 218 and Boy Scouts from Troop 218 from the left: Mikey Bartu, Troy Kalhoff, Tyler Sysel (behind), Joey Bartu, Ben Bartu and Clint Oldehoeft.

Fairview Manor residents had a little competition at their pinewood derby race this year.  Exeter Cub Scouts and Boy Scouts brought their cars along to race with the residents and help with the race.
Pastor Jeff Jensen of the Evangelical Free Church in Geneva brought a track that was donated to their church which is used with the youth.  He and Veteran Service Officer Eric Williams set up the track and the timing system.  Residents at the Manor had painted and weighted cars to use in the race.
Everyone enjoyed watching the cars race down the track with the digital readout showing their times and their places.  The residents cars were fast but the scout cars edged them out with strategically placed weights.  Each car raced several times in different lanes of the four lane track.
The scouts helped place the cars on the track and returned the cars to their owners after the race was over.
Along with their cars, the scouts wore their medals won in their pack races and also shared several of their trophies.