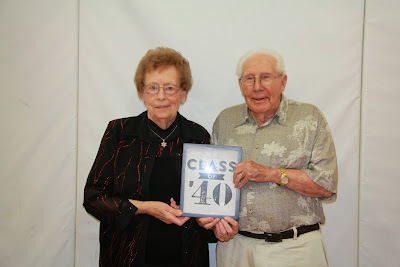 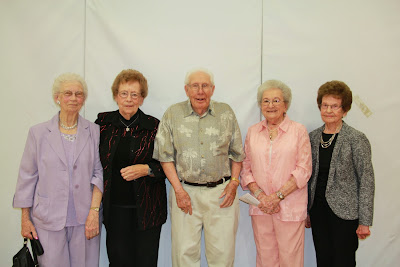 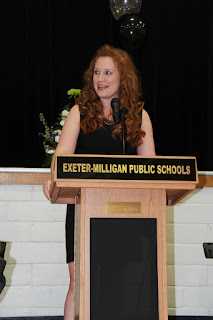 The Exeter Exeter-Milligan Alumni held their annual banquet on Saturday, May 23 at the Exeter site of the district.  The class of 2005 hosted the evening with a large group present.  The Master of Ceremonies for the evening was Bailee Becker Schleisman.  Kim Becker Bartolomeo (class of 1995) introduced the classes and gave the keynote address.  Golf tournament awards were announced by Chad Cudaback and the top 3 teams were Jim and Jean McKinnon, Derek Betka and Darren Engle and Wade Sluka.  Alan Songster gave a brief report on the Exeter-Milligan Foundation and Kenton Moore led the business meeting.  A dance followed at the American Legion.
Posted by Leesa Bartu at 7:30 AM No comments: 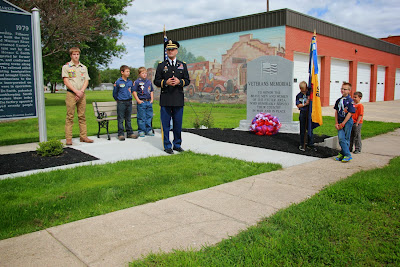 Above– A new war memorial in downtown Exeter was dedicated on Memorial Day.  Father Steve Thomlison spoke at the dedication and the Exeter Boy Scouts and Cub Scouts carried the flags. From left are Joey Bartu, Devin Harrison, Mikey Bartu, Father Thomlison, Tyler Due, Troy Kallhoff and Ronnie Babula
Below – The Exeter Q125 History Book Committee used their extra funds from the sale of the history books to purchase the war memorial that was placed on Exeter Avenue.  Pictured at the Memorial Day ceremony are from the left Faye Neeman, Terri Volkmer, Brian Moor, Brian Murphy and Agnes Anderson.  Not pictured are Shirley Janes, Jim Votipka, Jerreta Tauriella, Lonnie Shafer, Patty DeMoss and Doug Anderson. 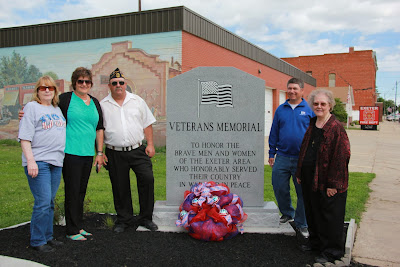 A new war memorial was dedicated in downtown Exeter on Monday, May 25th.

The stone was presented to the community by the Exeter Q125 History Book Committee. After the majority of the history books were sold, the committee had remaining funds and “our goal was to do something that would be long term and be something that generations to come would see,” explained committee member Brian Murphy.

Murphy approached the Exeter Village Board in November requesting the board approve the memorial and a location downtown near the historical marker.

After the go ahead was given the committee order the stone based on similar displays they had observed in other communities.  Their plan was to dedicate the memorial appropriately, on Memorial Day.

The first Exeter history book on the anniversary of the centennial had also been profitable and the funds left over had been used to pay for the historical marker in downtown Exeter.
This memorial is unique because it honors all of the branches of the military. The front of the stone is engraved with “Veterans Memorial.  To honor the brave men and women of the Exeter area who honorably served their country in war and in peace.”

The back of the memorial shows the symbols of the six branches of service and notes that the stone was dedicated Memorial Day 2015 by the Exeter Q125 History Book Committee.

The committee held a dedication downtown at the stone just after the Memorial Day program at the cemetery in Exeter.  The Exeter Cub Scouts and Boy Scouts led the flag ceremony and Father Steve Thomlison gave a brief dedication. 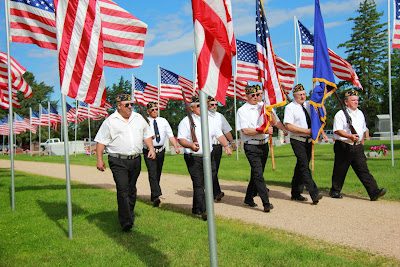 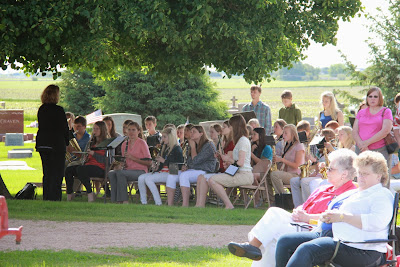 Above- The Exeter-Milligan Band played “The Star Spangled Banner,” “America” and “A Salute to Freedom.”  Below - Trystan Brandt plays "Taps."

Despite rain forecasted for the entire Memorial Day weekend, Monday morning dawned bright and beautiful. The Exeter Cemetery was resplendent with the avenue of flags flying and memorial blossoms.

Master of Ceremonies and the main speaker was Legion member Tim Wilbeck who served in Vietnam.  Wilbeck introduced Father Steve Thomlison, who gave the invocation. Thomlison serves as a chaplain in the military.

The Exeter-Milligan band also played “America” and “A Salute to Freedom.”  Wilbeck gave the address speaking about the many sacrifices that service members have made to keep our country free.

He spoke about Dale M. Hansen a 19 year old from Wisner, Nebraska who served during World War II and “fought like a giant” at Okinawa against the Japanese.  Hansen “proceeded to destroy a strong mortar position and annihilated many enemy soldiers. . .His parents later received his medal of honor was as he was killed by a Japanese sniper four days after his amazing display of combat valor.  Private Hansen like so many other defenders of freedom is forever young.”

He spoke of the heroism of Hansen and another young life lost too early, Brittany Gordon who was killed by a suicide bomb in Afghanistan.

Wilbeck shared these stories to remind the audience that Memorial Day is to honor, “Real people with real families.  We can best honor their sacrifice by remember their family who have lost so much long after the battles are done and the bombs have stopped exploding.  The children of our fallen warriors will still be missing a parent, the spouses will be missing life partners, parents will continue to grieve for their heroic sons and daughters who died way to early.  We need to cater to them not just as members of their family but as American citizens. No one can replace these fallen heroes especially in the eyes of their family. We can offer shoulders to cry on, assistance with educational expenses and assurances that their loved ones sacrifice will not be forgotten.”

He emphasized “Americans must remember that freedom isn’t free.”

Wilbeck spoke of the history of Memorial Day and its eventual establishment by Federal Law in 1957,”As the unofficial start of summer let us never lose focus of what Memorial day means.  It’s not about the beaches, picnics, auto races or my favorite the memorial day sale. Remembering our fallen once a year is not enough.”

Wilbeck also reminded the audience a debt is also owed to our disabled American Veterans who also gave so much.

After the 21 gun salute "Taps" was played by Trystan Brandt and "Taps Echo" was played by Amber Pribyl.  The color guard was dismissed and the crowd was invited to attend a dedication of the new memorial stone downtown and enjoy rolls and coffee at the Legion.