What Can You Recycle in Exeter? 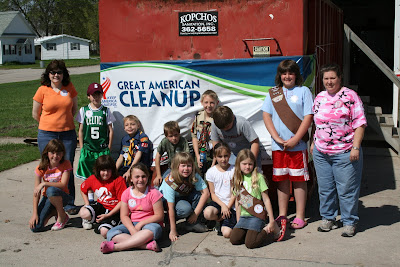 Exeter Cub Scouts and Girl Scouts pictured with their leaders next to the Great American CleanUp Dumpster. 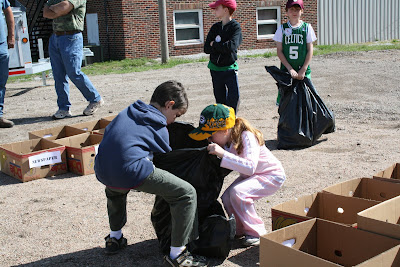 Eli Johnson (left) and Caitlin Murphy (right) quickly sort out the recyclable materials to the "trailer" during the race. 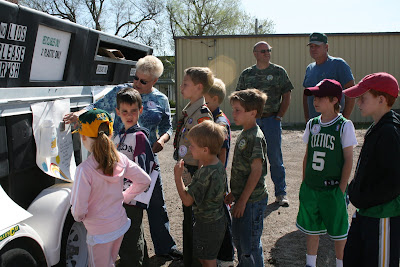 Exeter recycler Joyce Votipka (rear) explains to the group what happens to the materials they recycle. 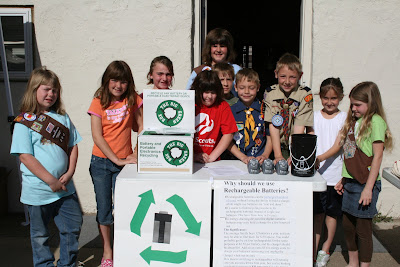 Exeter Girls Scouts and Cub Scouts gathered around the information on the new battery recycling program. They are pictured in the front row from the left Macy Due, Hannah Beethe, Kaitlyn Vavra, Vicki Androyna, Peytan Brandt, Trystan Brandt, Josie Hulse and Janey Erdkamp. Behind are Joey Bartu and Tara Mueller.

The Exeter Earth Day Extravaganza was held on Saturday, May 2nd in conjunction with the Keep America Beautiful/ Great American Cleaup weekend.

The Exeter Girl Scout Troop 390 and Cub Scout Pack 218 organized the event to educate the community about recycling opportunities in Exeter.

Attendees were invited to tour the new recycling trailer with long time Exeter area recycler, Joyce Votipka. Votipka explained what types of materials should be recycled and how they should be prepared for recycling. Under the appropriate bin, the girl scouts had created posters showing the type of item in the bin and how that material is recycled for future use.

After the tour, participants were encouraged to take the sorting relay challenge. They were given a bag of mostly recyclable materials and as the cub scouts timed them, they sorted the items into boxes that were labeled like the trailer. Several "trick" items were placed in the bag for the sorters to find.

During the event, door prizes were awarded as well as prizes for several contests. The Exeter-Milligan students were asked at school to pick a name for the new trailer and the winner was announced at the extravaganza. Fifth grader Elliot Erdkamp entered the name "Mr. Green" for the contest and his name was chosen. Erdkamp put the name on the trailer and was awarded a free pizza coupon donated by Casey's for his prize winning entry.

On display near the trailer was a sample pile of how much one family can recycle during a two week period. There was also a contest to guess how many lids were in a quart jar from bottles recycled during a month. Peytan Brandt and Kaitlyn Vavra both were correct with their guess of 40. They each received a cloth shopping bag with a battery recycling bucket and a piggy bank.

Many of the door prizes were donated by Public Health Solutions as part of a campaign to recycle batteries. One of the tables at the event was devoted to educating Exeter residents on the new battery recycling program now available A collection box for used single use and rechargeable batteries has been placed at the Exeter library. Piggy banks made completely of recycled electronics were given away in hopes of encouraging the use of rechargeable batteries to save money. Also given at the event were buckets to collect batteries for recycling.

Extra informational materials, coupons for greener living, and kids booklets from the event are available for free at the Exeter Library. At the end of the Earth Day celebration hot dogs and cans of pop all donated by local businesses were served.

Don't forget - the Exeter-Milligan Cheerleaders will be having a car wash from 4:00 p.m. to 7:30 p.m. at the Fire Hall on Tuesday, June 16th. Freewill donation with a $5 minimum!

Come out and support the Timberwolves Cheerleaders!
Posted by Leesa Bartu at 10:36 AM No comments: 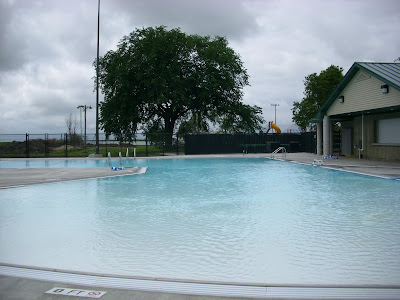 If that doesn't make you want to don your suit and jump right in I don't know what will - ooops but we have to wait until the State inspectors clear the way and give the okay sign for the pool to open. Tentatively, the village board has set June 28th as an opening date with a grand opening on July 18th. 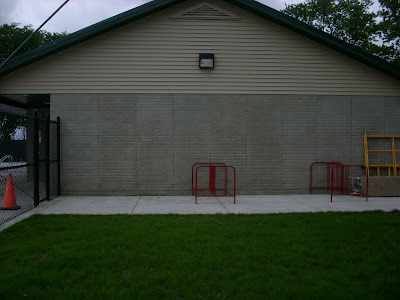 The bike racks are all in place for the tons of bikes that are expected this summer. 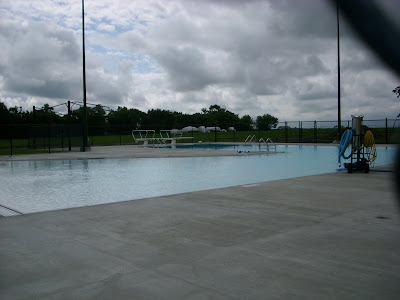 With the pool now full it looks like a beautiful glass sheen when the wind is still (oh, yeah, this is Nebraska, the wind is almost never still!).
Posted by Leesa Bartu at 10:18 AM No comments:

Check out Exeter in the Fillmore County Video

Produced by Murphy Productions (Jon Murphy), the new Fillmore County Video will be used as a recruiting tool.

Click here to be linked to the Fillmore County Development Corporation to watch the video or click on the video box below to watch here.

You will see lots of shots of the county and Exeter, along with interviews and lots of great locations in Fillmore County.