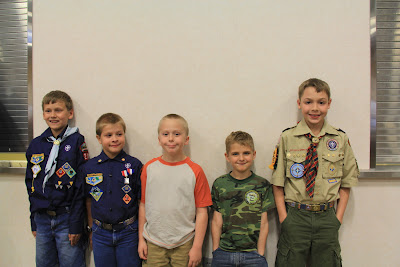 Members of Pack 218 of Exeter that participated in the Prairie Winds District Pinewood Derby were from the left Clint Oldehoeft, Ben Bartu, Braden Capek, Blake Meyer, and Peytan Brandt.  All the boys entered the race portion except for Ben Bartu.  Bartu took home the Best of Show in the realistic division. 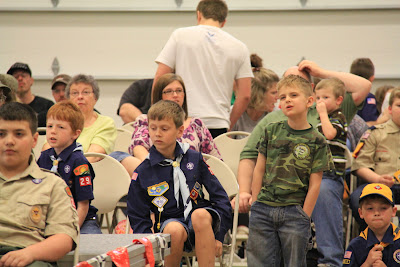 Sitting at the end of the track the cub scouts wait in anticipation to see how their cars do.   On the far left end is Clint Oldehoeft a member of Pack 218 of Exeter nervously watching his car go down the track. 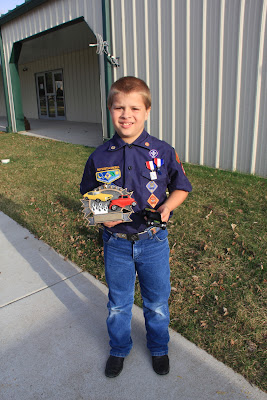 Ben Bartu with his Pinewood Derby Car and his award for Best of Show Realistic.
Posted by Leesa Bartu at 9:08 AM No comments: 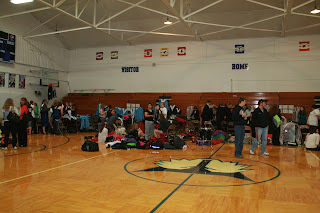 Exeter-Milligan was crawling with students, band teachers, parents and other audience members as they hosted the MUDECAS music competition with five other school participating.  The event included band performances, show choirs, and individual participants.  Schools that participated were Meridian, Diller-Odell, Freeman, Lewiston, and Palmyra with over 200 students attending the event. 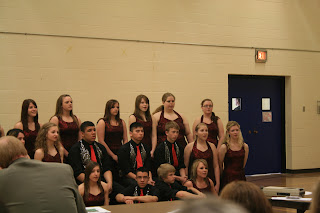 The Meridian school Show Choir performed three numbers, “Puttin’ on the Ritz,” “I dreamed a dream,” and “Lullaby of Broadway.”
Posted by Leesa Bartu at 8:14 AM No comments:

Congratulations to Megan Zwickl and Jennifer Pribyl for making first team all-conference (CRC) and Taylor Erdkamp for receiving an honorable mention.  Brady Bristol was chosen for first team all-conference and James Sluka received an honorable mention.  Brady was also chosen to play in teh All Star Game and Quinten Loontjer was chosen as an alternate.
Posted by Leesa Bartu at 8:28 AM No comments:

The Exeter Chamber of Commerce once again sponsored a community Easter Egg hunt in Exeter.  Saturday afternoon was beautiful and the 1200 eggs were hidden all over the playground and fields at the Exeter-Milligan school.  The Exeter-Milligan FCCLA chapter volunteers each year to not only stuff the eggs (this year junior high members of the group took on that task), but they hide the eggs, dress up and help the kids with the hunt.  Four different age categories were given prizes, one for a boy and one for a girl.  This year’s winners in the three and under category were Layla Whitford and Will Kallhoff, preschool and kindergarten were Sydney Huber and Treton Vossler, first and second grade winners were Morgan White and Ben Bartu and Jaiden Papik won in the third and fourth grade.  There were no third and fourth grade boys present so an extra name was drawn from the preschool and kindergarten with Mikey Bartu winning. 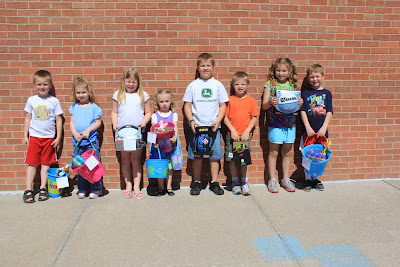 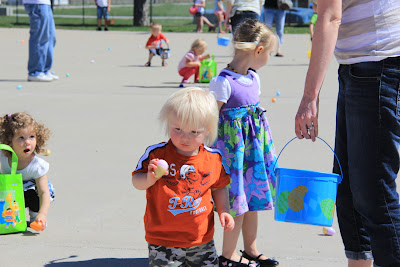 Xander Whitford isn't quite sure what he wants to do with the egg he picked up. 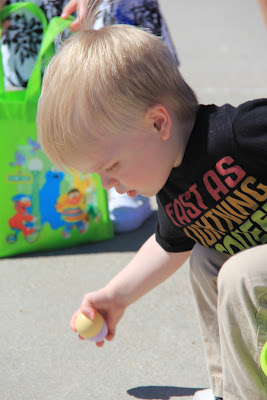 Deacon Erdkamp has figured out how to pick up the eggs and has his basket handy to put them in. 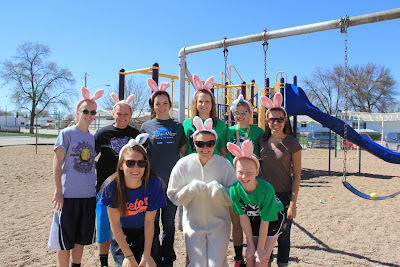 – FCCLA volunteers who hid the eggs at the Exeter Chamber of Commerce Easter Egg Hunt are pictured in the front row from the left Maitlyn Thomsen, Megan Waldron, Joan Strate.  Back row from the left Madison Horne, Logan Zeleny, Claire White, Megan Zwickl, Taylor Erdkamp and Meredith Emshoff.
Posted by Leesa Bartu at 8:05 AM No comments: