E-M gets another one in the W column 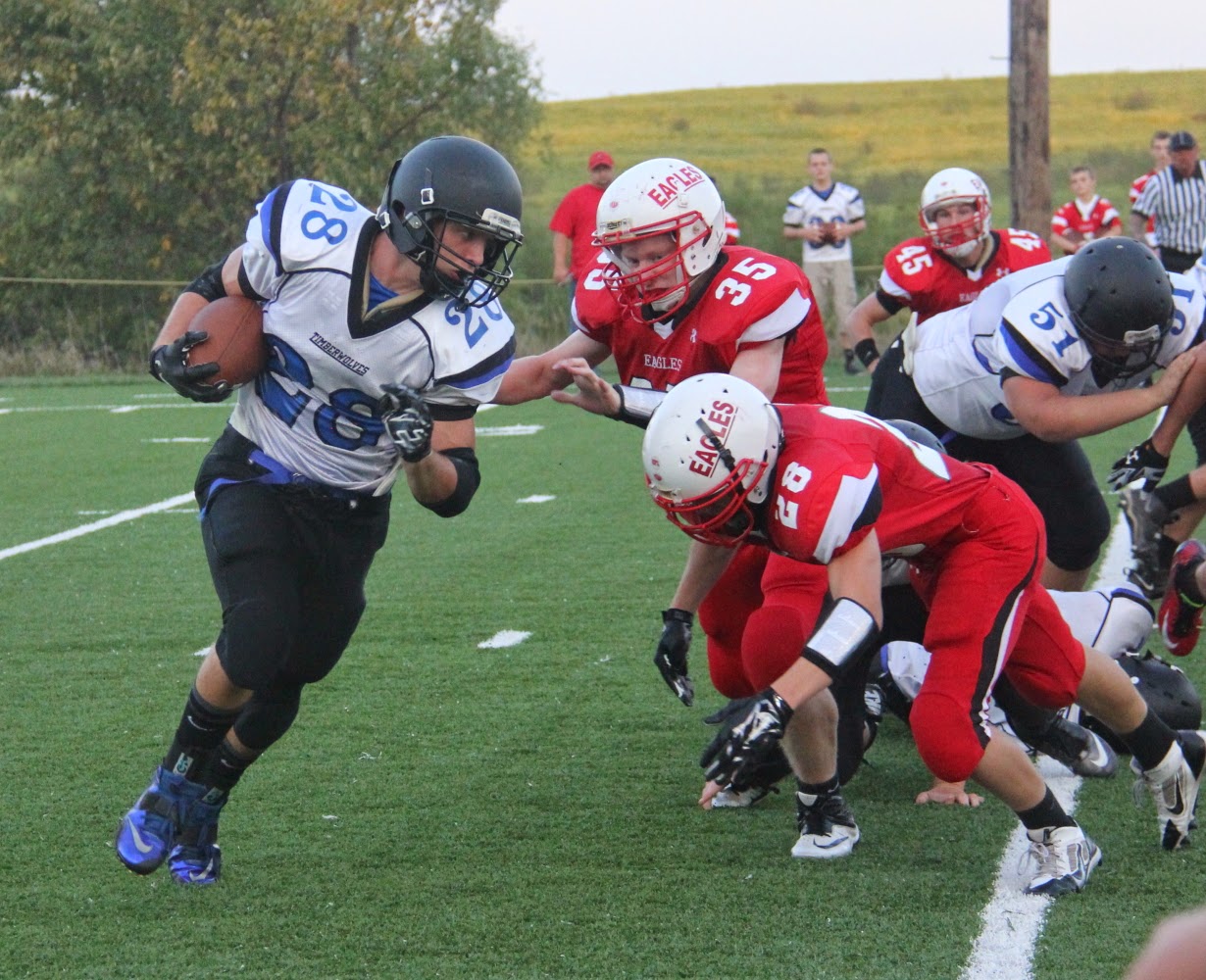 Exeter-Milligan’s Kyle Jensen slides around Johnson-Brock defenders #35 Ben Bohling and #28 Wyatt Nickels to put the Timberwolves on the board on their first possession. 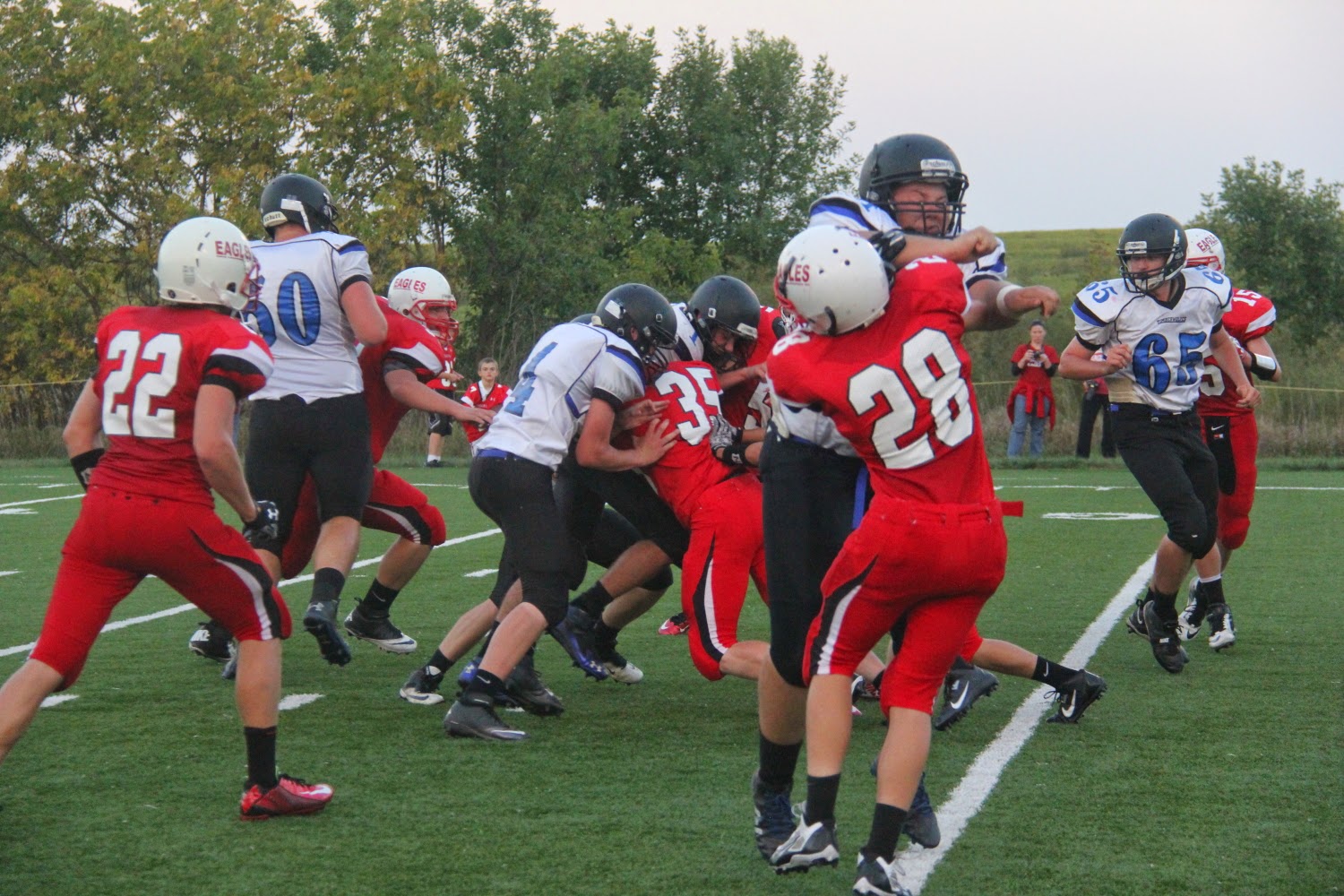 Everyone gets in on the action showing Johnson-Brock how it is done. 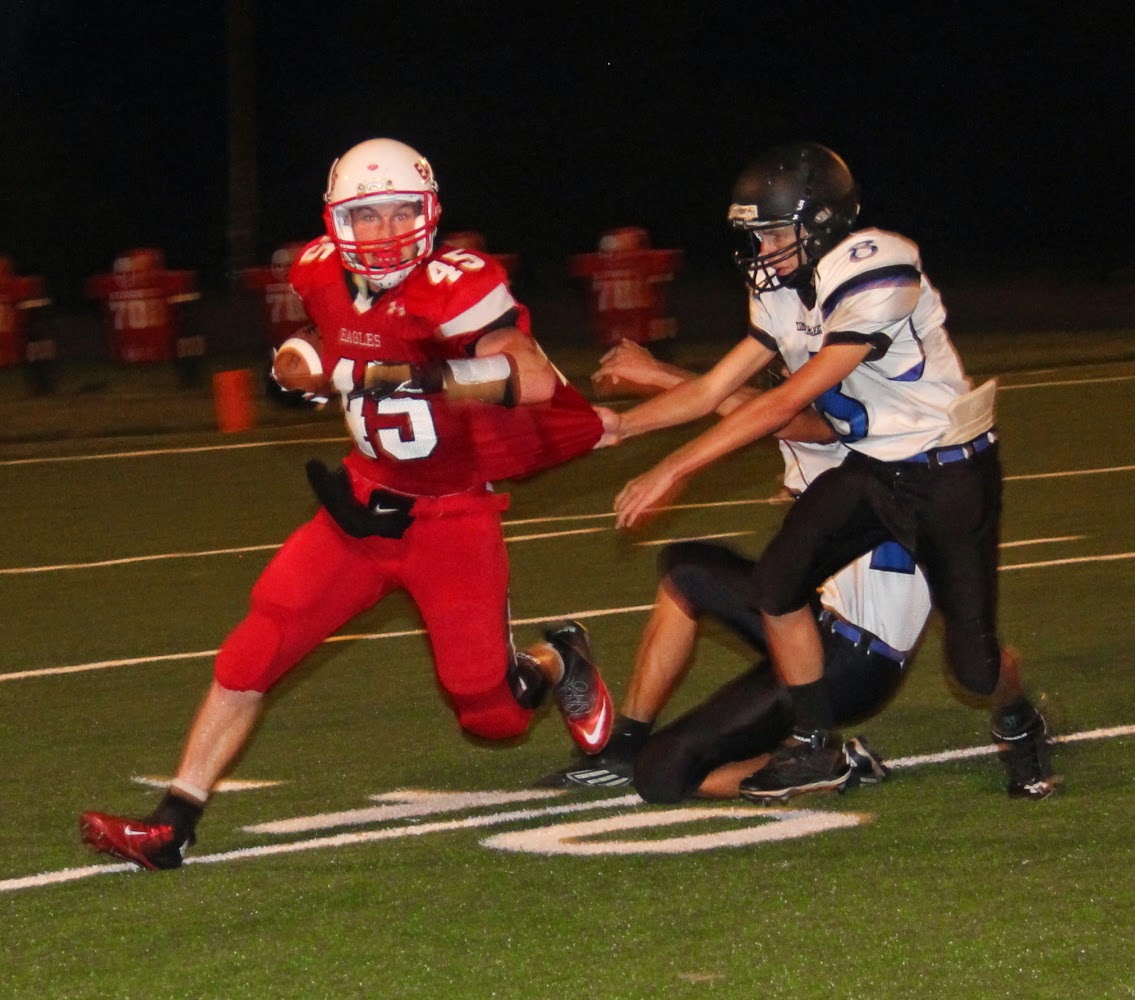 #45 Brody Clark carries the ball for a few yards before he was brought down by Exeter-Milligan’s #8 Eric Olsen and #22 Samuel Colombo. 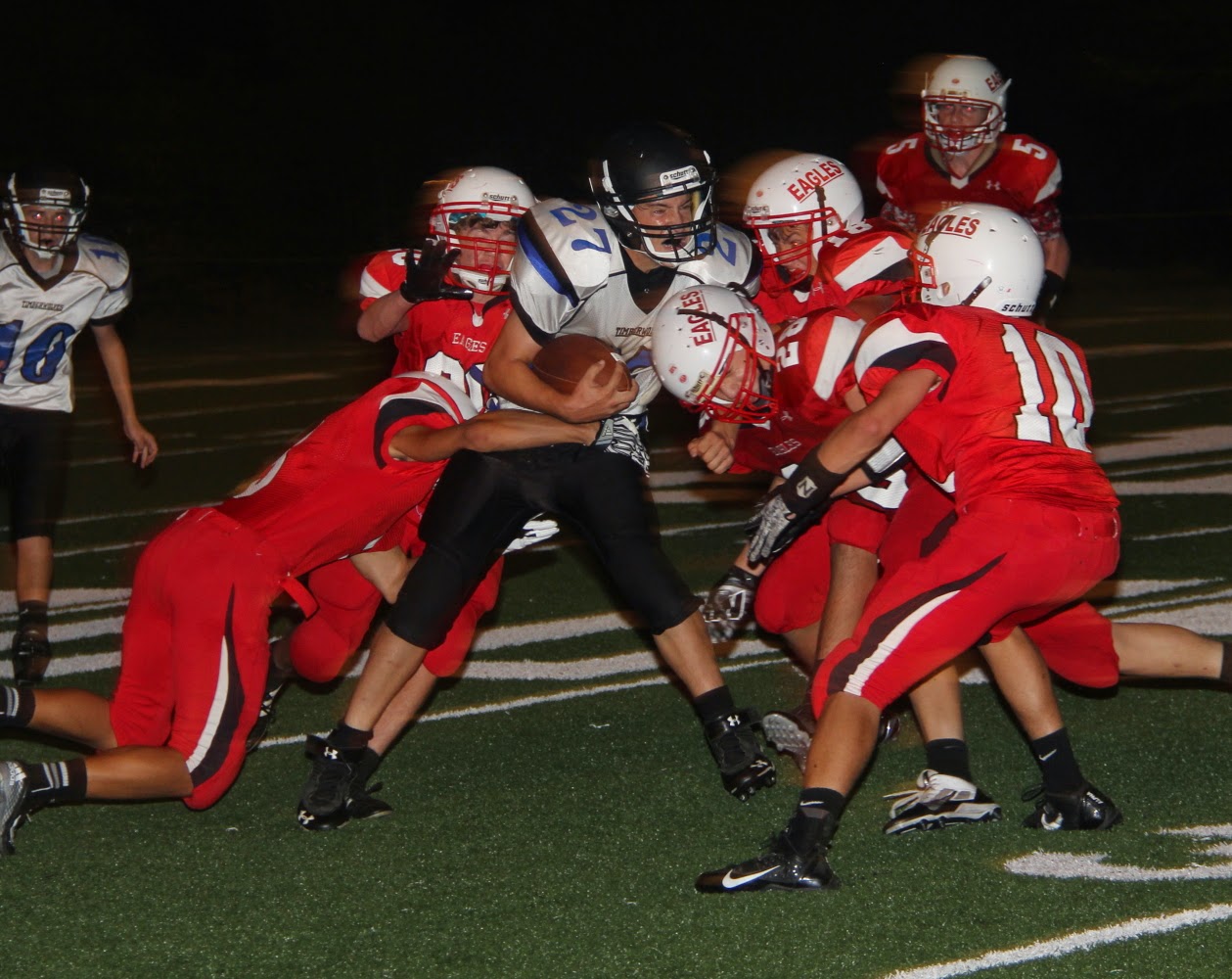 
The Timberwolves headed to Johnson, Neb. Friday night to meet the Johnson-Brock Eagles.  It didn’t take Exeter-Milligan long to show that they are a force to be reckoned with in D-2.

It wasn’t long before the T-wolves were on the board again this time with Dusty Axline carrying the ball and Luzum keeping the ball on the point after bringing the score to 22-0.

The second quarter didn’t fare much better for the Eagles as Jensen again headed down the field for a 76 yard touchdown run. It was Axline who carried the ball in for two with 10:31 on the clock.
Jensen and Axline got their hands on the ball again bringing the T-wolves on top of the Eagles 38-0.

Johnathon Mounce got into the touchdown action carrying the ball into the endzone.  The point after failed but the Eagles didn't have much of a chance as Mounce intercepted the ball and brought it down just shy of another touchdown at the 2 yard line.

With 2:05 left in the first half Luzum ran for a 51 yard touchdown bringing the half time score to 56-0.
The Timberwolf younger players had the opportunity to play for the entire second half.  At quarterback freshman Seth Maxson served the ball up to Eric Olsen and Joey Bartu who both ran the ball.  Olsen intercepted what would have been touchdown for the Eagles, stopping their run and bringing the ball out to the 15 for the Exeter-Miligan team.

The Eagles scored twice in the second half, once on a breakaway run and the second on a hail mary pass that brought them down to the 5 yard line.

Next week the Timberwolves host the Giltner Hornets in Milligan.

More Progress on the Field Events 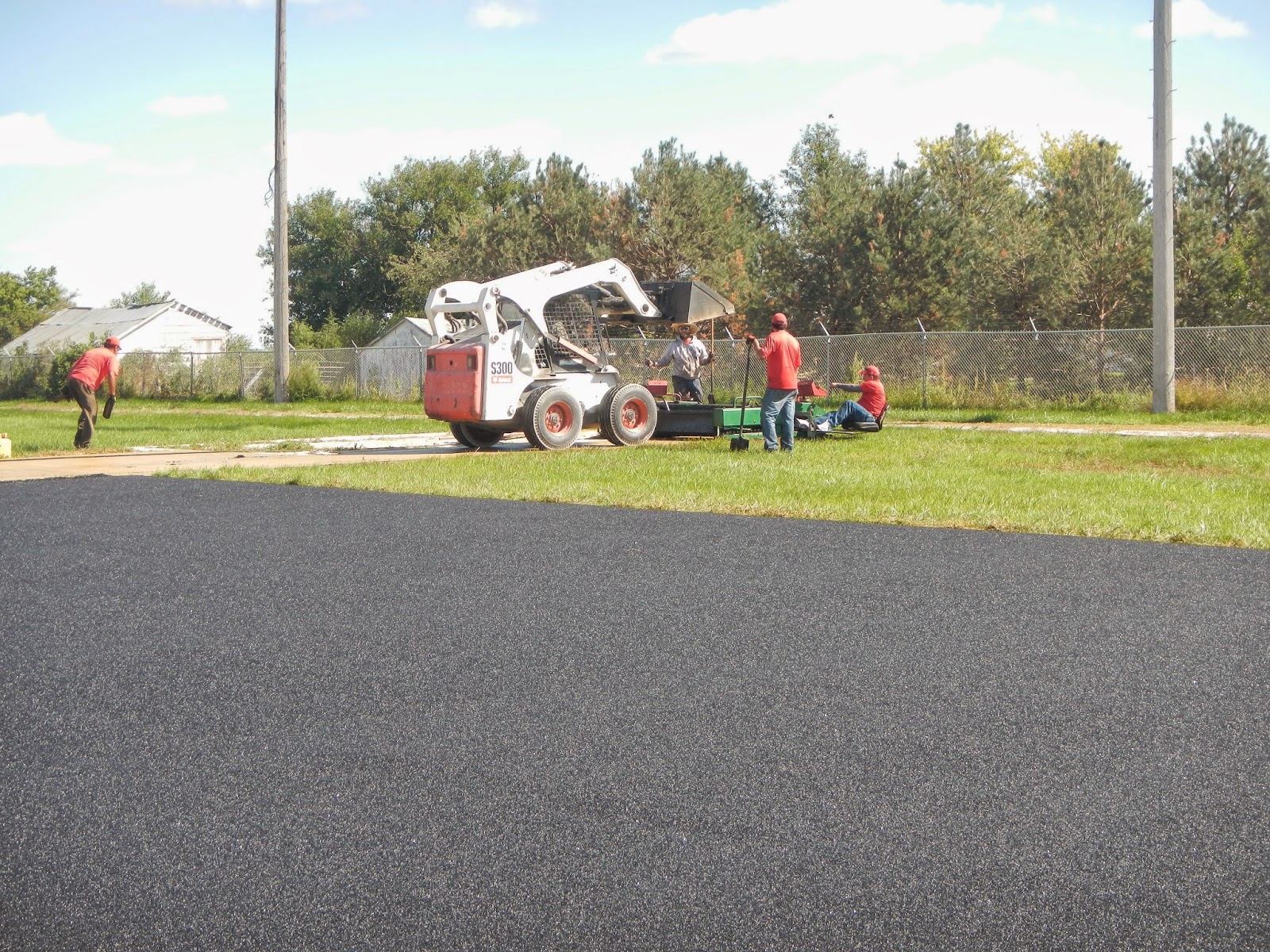 The large rubber matting was poured on Monday afternoon at the Exeter site track long jump and high jump areas.  The lines and markings will be painted in approximately two weeks. There is a group working on raising funds to coat the actual track. 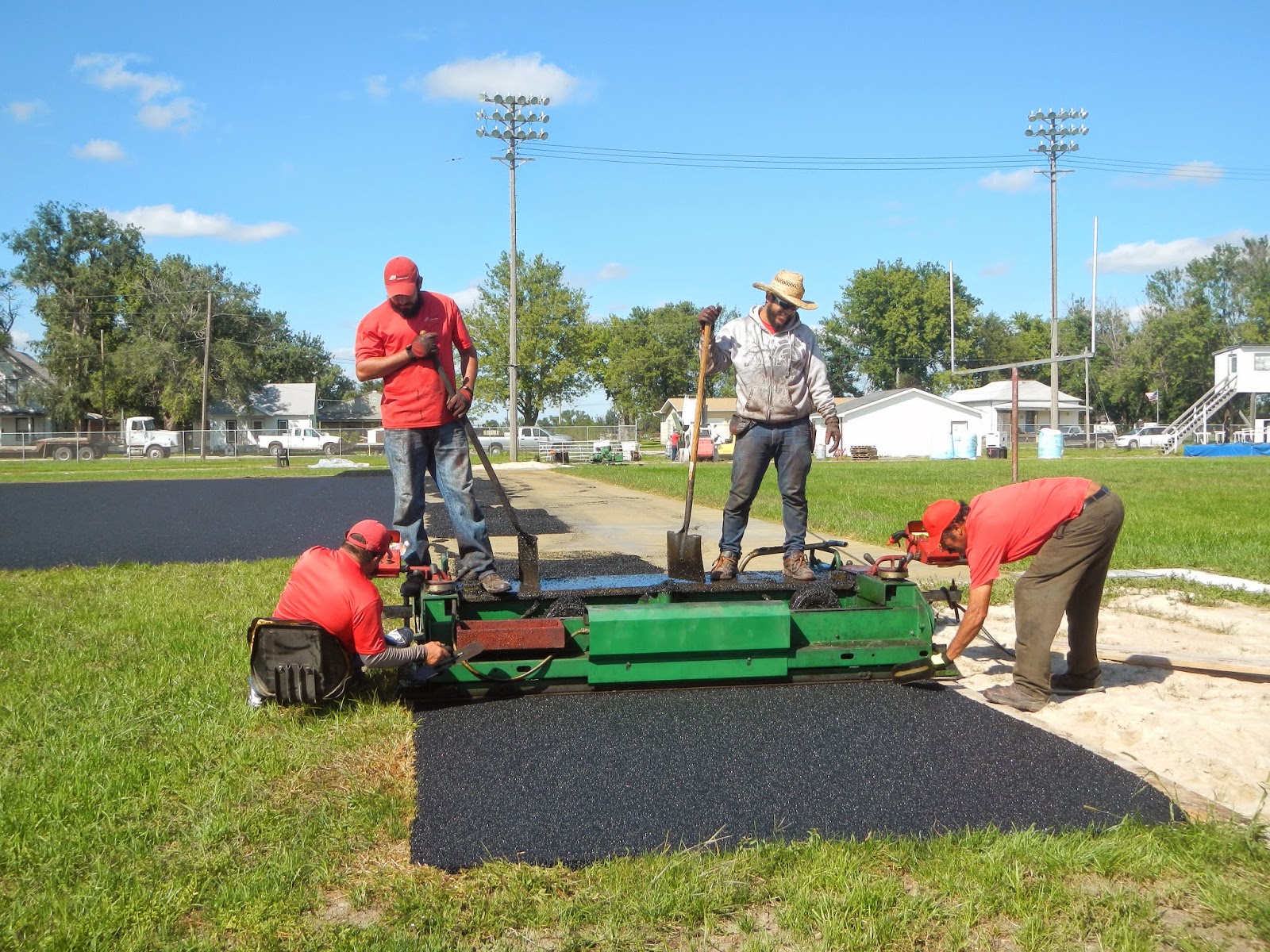 
The Exeter-Milligan School Board met on September 10th first opening a budget hearing to the community.
Superintendent Paul Sheffield reviewed the basic numbers noting that the district has had a $112 million valuation increase in the last year.

Sheffield also noted that costs for the Special Education program increased $93,000.  “We are asking for $122,825 more but the levy is down.”

One difference is that the board has changed the amounts levied for the building fund.  “Last year,” Sheffield explained, “the building fund was at 3.8 because the JPA took some.  The board can levy up to 14 cents by statue so we will levy 13.955.”

“Half of the schools in the Crossroads Conference were operating on a levy override of the previous five years but now all of them are under the levy because land values have all gone up,” Sheffield reported.
The budget shows that district will receive $6,667.00 in state aid this year.

School board President Sharon Kuska and Sheffield explained that the JPA levies in order to pay off indebtedness but since there are no bonds taken out for a project and there are no payments to make.
“Right now we don’t have a building project planned or in the works and we are holding off for this year until we have something to put the funds toward.  We are just putting it on hold for a year. I think we will have a decision by the end of the year,” according to Kuska.

“We are working with an architect and we are looking at what we think is feasible.  We are discussing it.  It’s not that we haven’t, it’s that we haven’t made a decision on it yet.  This has caused a lack of consensus on the board at the moment.  We would rather have consensus.”

Audience member Brian Murphy responded to Kuska, “I wish my kids could use it, I wish the community could use it.  I wish a decision would be made.  I don’t care how it is funded.  When Junior High basketball season comes we will all be practicing in the same gym as I don’t see the weight equipment moving anytime soon (out of the small gym).”

School board candidate Adam Erdkamp gave his input, “We are still talking about the same amount of money (taking it from the building fund instead of the JPA), there has to be some kind of deadline.  The taxpayers are wanting to know.”

Kuska noted that he board would have another work session in September.

The levy request hearing was closed at 8:15 and the regular monthly meeting was called to order.
After the Treasurers’ report was given by board member Tom Sluka and the board made a correction on the minutes of the work session they dove into the agenda.

The board reported that part of the track improvements are completed but the equipment broke down.  “What is done looks good and the grass around the area came up nice,” noted Board Secretary Annette Gloystein.

The work session on building and grounds was scheduled for September 22nd in Exeter at 7:30 p.m.
Board member Brent Moore commented on the building and grounds projects, “It would seem we have levied a lot of taxes for the JPA.  It’s good to have the funds.  If we aren’t going to spend the dollars then we shouldn’t levy for them.”

After approving Sheffield as the legal representative for the district the board discussed the state school board convention and the labor relations conference.

Sheffield presented some issues that the state has had with the NESA testing results. “Next month I will have a report that compares last year to this year.  We won’t be able to release the writing scores for 8 -11th grade as there were some glitches in the tests for one district. We can’t publish them but we can use them for personal information. Using that information we are doing a few things differently this year but we are moving to a MAP assessment that gives us immediate results.”

“I like that you are charting an individual child’s progress.  It shows that a child is improving versus a group always,” said Gloystein.

The board set the next meeting for October 13 in Milligan.

After the meeting Murphy added, “I hope that the band room is included in the project as almost half of the high school is involved in the band this year along with the elementary students who are going down to the band room in the basement for music.”