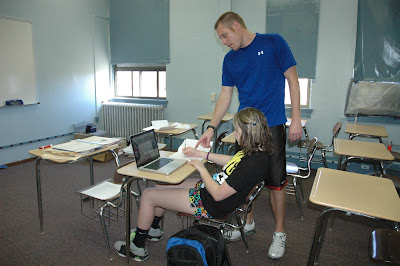 Mr. Jackson Krejci's Math 8 class at Exeter-Milligan is currently using the OdysseyWare Math program to work on a variety of skills.  They skills they are currently working on include percents and long division and will soon work with a new website: www.mangahigh.com.  This is more of a computer math game where they can review their math skills.  Pictured are Alexis Trauger and Mr. Krejci working online, incorporating the laptops each 7-12 student is issued at Exeter-Milligan.
Posted by Leesa Bartu at 7:32 AM No comments: 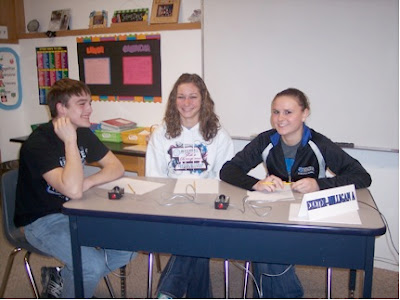 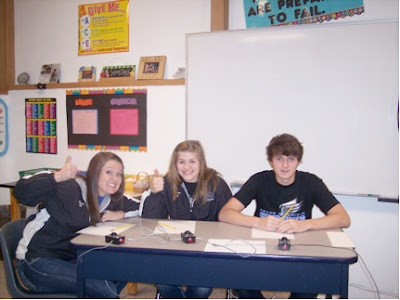 Six students attended the first ever Harvard Math Day on Saturday, February 25. Those students attending were Quinten Loontjer, Jennifer Pribyl, Becca Vossler (top Photo), Erica Yound, Taylor Erdkamp, and Felix Ochsenfeld (our foreign exchange student from Germany). This was a double elimination tournament and both teams were 1-2 for the day. Deshler A was first, Harvard B was second, Harvard A was third and Shelton was fourth. There were seven schools with eleven teams competing.
Posted by Leesa Bartu at 7:30 AM No comments: 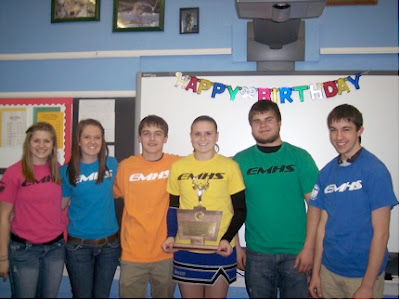 The Exeter-Milligan High School quiz bowl team placed first in the 2012 CRC quiz bowl meet.  Shickley hosted the CRC meet on February 15.  Exeter-Milligan started in round 1 against Bruning-Davenport with a win of 65-0. In round 2 we defeated Osceola with a score of 50-0.  We moved into round 4 against Cross County and won 35-15. In round 5 against Shelby-Rising City, we won with a score of 35-10. This set us up for the championship round against Shelby-Rising City again with a win by a narrow margin of 40-35. This meet is a double elimination tournament with twelve teams from the Crossroads Conference. Exeter-Milligan went undefeated to bring home first place., Shelby-Rising City was second, and Hampton was third.
The quiz bowl team will be back in competition on March 21 at the Mudecas meet in Beatrice and then on March 28 at districts in Seward, which is hosted by ESU6.
The Exeter-Milligan team consisted of Taylor Erdkamp, Erica Yound, Quinten Loontjer, Becca Vossler, Blake Papik, and Michael Schoop,. The students were also, awarded first place medals. Congratulations on a job well done.
Posted by Leesa Bartu at 7:30 PM No comments: 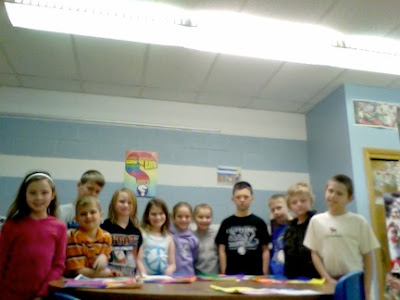 Casey Pohl’s 3rd graders at Exeter-Milligan have been busy painting pictures to display at the elementary spring concert.  The theme of the program is My Favorite Things.  The 3rd grade has followed a style of painting from Andy Warhol.  The students were asked to pick either their favorite candy or favorite sport to paint to put on display.  Pictured are the 3rd graders having worked on their projects. L-R: Cammie Harrison, Blake Meyer, Clint Oldehoeft, Georgia Meyer, Olivia Murphy, Bailey Hansen, Jaiden Papik, Jackson Beethe, Brock Steuben, Nick Wiederspan, and Casey Jindra.
Posted by Leesa Bartu at 9:54 AM No comments: