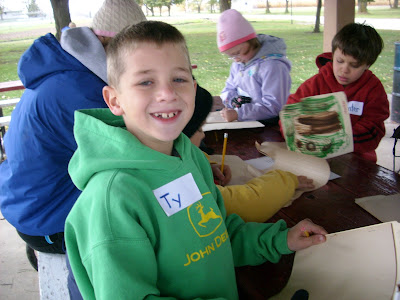 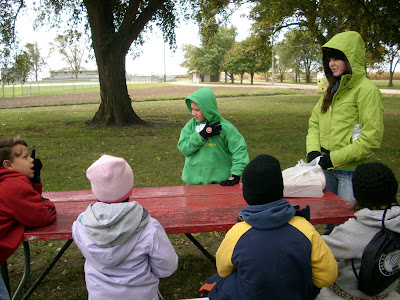 At the far right high school junior Amanda gets ready to show her group of students how to eat like a bird during Outdoor Education Day. Seated at the table from the left are Hunter, Cailtin, Eli, Jacy, and across the table is Ty. 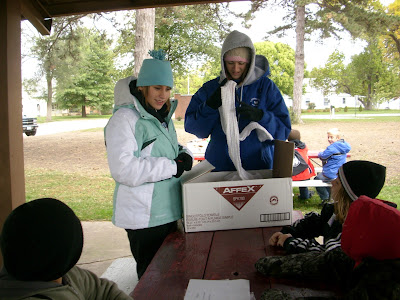 Juniors Taylor (left) and Heather (right) get ready to do some teaching with their group of students with Brooke on the right. 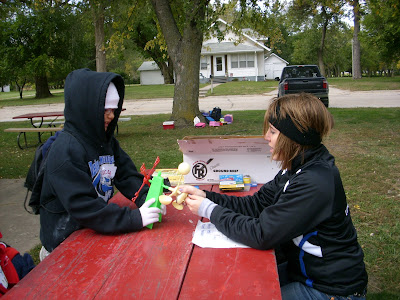 Jacy (right) and Kelsey (left) work on the wind project.

Despite cool temperatures and strong winds, Friday found Exeter's Gilbert Park full of second graders and high school students eager to learn from each other.

During the event, which lasted most of the school day, the students explored the park, made weather vanes and ate like birds during the annual Outdoor Education Day.

Exeter-Milligan second grade teacher, Marla Weber, initially created this educational day as a project when she was in college. She has tried to include an outdoor education day each year for her students.

Mrs. Weber makes up packets of ideas for the students from the Exeter-Milligan Senior High Biology 2 class of Miss Sliefert. In class, the juniors get to pick out a packet which has one topic in it, they get the materials ready to do projects with the second graders and then are graded on how well they present the materials and work with the younger students.


This year the stations included rain, insects, tracks, trees, birds, wind and senses. To keep a variety during the day the students also played several neature related games throughout the day. At each station the "students use reading, writing, math, science and social skills, while learning about their environment. Each center was designed with hands-on activities and the students had an opportunity to record their findings in a journal," according to Weber.

Both teachers, Mrs. Weber and Ms. Sliefert, agree that "It is a learning experience for both groups of students. When the high school students have to know how to teach it they realize they have learned a lot."

Ms. Sliefert said, "The interaction between the two groups is wonderful. The high school students are well prepared. Even though the subjects are simple, teaching it is a different story."

One of the goals for Mrs. Weber was, "Having the students learn about nature in a hands on experience. This helps them remember the lessons and then having take home items helps too. They will go home and share with their families what they made and this will reinforce again what they have learned today."

At the end of the day students had a pile of things they could take home including a animal track plaster cast, a rain stick, a tree ring of their life, and a wind vane along with their journal and some great memories. Neither teacher could decide which class looked more forward to the event.

Not only did both groups get to spend the day away from the school building, but by moving their classroom outdoors, they got to learn about the world around them through lessons in the park.
Posted by Leesa Bartu at 12:54 PM No comments: 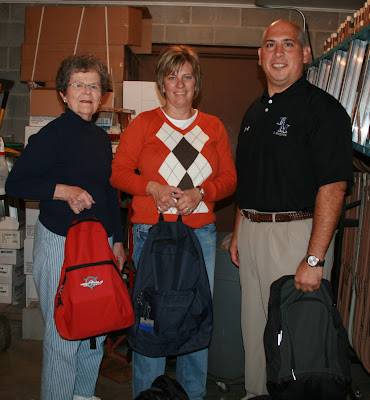 From the left, LaVonne Guthrie, Cathy Rhodes and Exeter-Milligan Superintendent Paul Sheffield hold the backpacks that Sheffield will distribute on Fridays containing enough food to feed a family of four for the weekend. 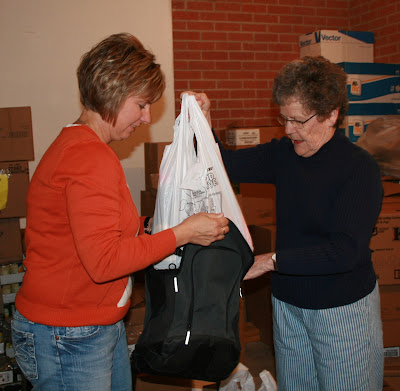 Cathy Rhodes, left, and LaVonne Guthrie, right, spend an hour or so each month packing dry goods in sacks to be placed in backpacks each week to help feed needy families in the area. 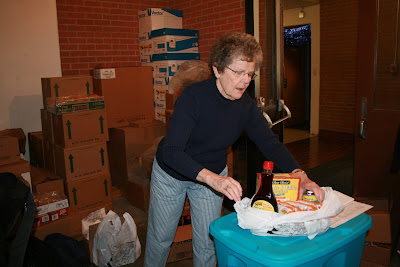 LaVonne Guthrie shows the some of the food that is packed in each backpack for elementary students.

The United Methodist Church in Exeter had been looking for a mission, a way to reach out to the community and share. Who knew it would involve backpacks?

A comment made by a family member sparked church member LaVonne Guthrie's interest. Her daughter-in-law, Kris Guthrie, participates with the weekend backpack program in Lincoln and the Food Bank "was wanting to bring the program to the rural areas," according to LaVonne.

United Methodist Church member Cathy Rhodes and LaVonne Guthrie have spearheaded the effort along with the assistance of Superintendent Paul Sheffield.

They connected with the Lincoln Food Bank and arranged for the United Methodist Women to sponsor the backpack program at the Exeter-Milligan Elementary School for a year.

The idea behind the program was to provide nutritious menu items that are easy for kids to prepare and eat. The backpacks, stuffed with canned and boxed goods, sometimes include a voucher for bread or eggs which can be used at a local grocery store. They almost always include a large box of cereal which Rhodes hoped "kids can have breakfast on some of the leftover cereal during the week as well."

"The Lincoln Food Bank brought a big truck with a pallet of food that we put in a storage area at school and we assemble the backpacks there," according to Guthrie.

The two women meet together once a month and pack the food in plastic grocery sacks which contain "enough food for four people for a weekend. The menus are very nice and there are six different menus that will rotate," Guthrie explained.

Superintendent Sheffield distributes the backpacks every Friday and when they come back on Monday he refills them with the bags that Rhodes and Guthrie have prepared for the next week, sets them in a sealed plastic tub and is all ready for the next Friday.

With the discounts the Food Bank receives on bulk purchases, each weekend of meals costs between $4.50 and $6.00 per week. The United Methodist Church hosted an ice cream social with the proceeds to go toward the program. "We're (the United Methodist Church) okay for this year but after we get it going we're hoping that some of the other organizations in the area will be willing to help," hoped Guthrie.
Posted by Leesa Bartu at 9:41 AM No comments: 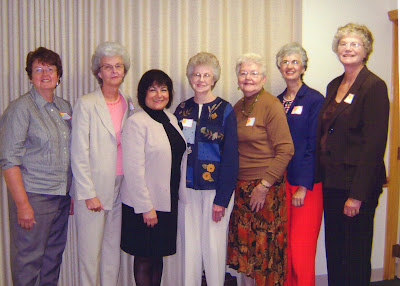 Salley Ganem, First Lady of the State of Nebraska, was the featured speaker at the NFWC District IV Woman's Club Convention held in Seward on September 29, 2009. Pictured here from the left with her are: Elaine Oldehoeft, Judy Dinneen, Reba Toothman, Marlene Gallup, Karen Chapman, and Bonnie Cudaback.

The 104 annual Convention of District IV NFWC Women’s Clubs was held
in Seward on September 29,2009. Attending from Exeter were NFWC
Exeter Woman’s Club members Bonnie Cudaback, Marlene Gallup,Elaine
Oldehoeft, Karen Chapman, Reba Toothman and Judy Dinneen. District 4
President, Della Miers presided at the days program. Thought for the
day, pledge of allegiance and club collect were given by Jean
Kolterman of Seward. A welcome by Seward Club President, Betty Galen
was extended to all the ladies in attendance. Pat Coldiron, Seward
Chamber Director , welcomed members to the city of Seward. Lois Havel
of Wilber gave the response . Pat Gage of Aurora and District 1st
Vice President introduced all District and State Officers and Chairmen
in attendance at convention. Bonnie Cudaback, District Treasurer
gave the treasurer’s report . Melisa Schultz Of Seward and the state
Leads representative told us about her experiences at International
Convention in Cleveland. The nominating committee presented the slate
of officers for .2010-2011 : President Della Miers, President -
Elect Brenda Rippe, First Vice President Bernice Cantrell, Secretary
Melisa Schultz and Treasurer Nancy Seward. Jean Kolterman was in
charge of the break and invited us to “Come to the Fair” where we
played games and won prizes with our contributions going to the Lincoln
Peoples City Mission.
Special guest speaker was Sally Ganem, Nebraska 1st Lady. She spoke
to us on “Volunteerism and the Read Aloud Program." She encouraged
reading out loud to our children and grandchildren to develop their
reading skills.
Jean presented a memorial service for deceased District IV members
during the past 2 years. Marlene Gallup gave the luncheon prayer
followed by a fun “Come to the Fair” lunch of hot dogs, salads and
punch. Following lunch the annual auction was held to raise funds to
support our Fine Arts Contest that is held every March.
Afternoon speakers included NFWC President Janice Predoehl and State
President - Elect Cheryl Strickler. Information included plans for the
2010 International Convention to be held in Omaha in June . The
theme for State Night will be “Nebraska the Good Life”. State
Convention will be in April at Mahoney State Park. Bonnie Cudaback
gave the final credential report showing 37 in attendance. Pat Gage
presented a gift to Della for her service as President during the
2007-2009 administration., Esther Miller extended an invitation from
the Beatrice Woman’s Club to host the 2010 District IV Convention.
Posted by Leesa Bartu at 9:42 AM No comments: