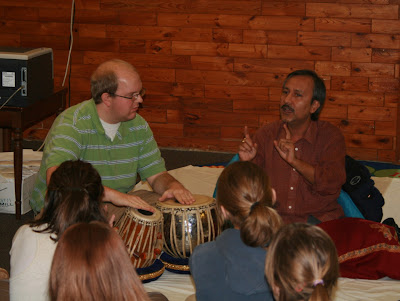 Exeter-Milligan band students were given a rare introduction to the music and instruments of India Tuesday morning.
Straight from India, Sandip Burman, brought his sitar, a 20-stringed guitar, and two of his large set of tabla.

Not only did Burman play his instruments for the band members, the artist explained how music crosses cultures, often sharing a few words in Spanish to illustrate his point. He taught the group the Indian musical equivalent of the note scale and showed them how he tunes his sitar and the tabla (drums).

Prior to the performance, Burman spent a great deal of time alone in the band room carefully tuning his instruments. His tour manager, John Gardner, spoke to the waiting students about the experience they were about to have. He explained how Burman would be playing classical music, but not what they are used to.

Burman began his 2010 U. S. tour with the stop in Exeter and will visit 15 more schools in Nebraska, Kansas and Oklahoma before returning to India mid-January. If you visit his website, www.sandipburman.com you can see the many places that this renowned world artist has performed.

Band Instructor, Shane Whitford, experienced Burman performing while he was in college, and felt like the cultural exposure was more than worthwhile for the students. "Sandip's tour company called me initially and asked if we were interested. Had I never heard of him I probably would have said no, but I remembered his performance when I was at Peru State College. I immediately felt that this would be an excellent cultural experience for the students. Personally, I have been a fan of Indian music ever since Sandip's performance at Peru. I hope that some of the students here at Exeter-Milligan will learn to appreciate it as well."

Burman started his lecture with a request for Whitford to sit with him and experience both the sitar and the tabla. Whitford got a lesson in playing the tabla with the audience helping keep the time and clapping with Sandip's instruction. "The best part of the experience for myself and the students was how close we got to sit to the performance. To be able to see the sitar and tabla drums up close is rare treat. So many times you go to concerts and you sit so far away from the performer that you can only hear the music and not see how it is made. We were able to sit right in front of Sandip and see exactly how he plays the instruments," said Whitford.

Exeter Residents Have First Baby of the New Year at York General Hospital.

Wayne and Rachel Vossler of Exeter delivered the first baby of the new year at York General Hospital. Joel Frank Vossler was born on January 4th at 4:20 a.m. He weighed 7 lbs and 11 ounces and was 19 inches long. He joins brother Trenton, 4, and sister Joleen, 2, at home in Exeter. Congratulations to Wayne and Rachel and welcome Joel!!
Posted by Leesa Bartu at 1:07 PM No comments:

Exeter-Milligan School has now had five snow days this winter season due to three severe blizzard and snow storms that have hit the area.

Temps were more than 20 degrees below zero for morning temperatures on Friday morning before factoring in the wind chill from the high winds that have continued to gust. Thursday there reports of Highway 6 west of Exeter being drifted shut again and travelers stranded all over.

The temperature is predicted to rise into the above 20 degree mark starting on Sunday and residents will probably feel like those temperatures are balmy.

Snow plows are continuing to plow the drifts and hopefully the county will have the country roads cleared by Monday so that buses can run. The last snowstorm after Christmas the county had to hire several local companies with very large loaders to clear some of the drifts out in the country.

This current storm has combined high winds, a small amount of snow and deadly temperatures and wind chills. Another small chance of snow is predicted for Sunday night and Monday morning.
Posted by Leesa Bartu at 12:50 PM No comments:

The Exeter Village Board Meeting scheduled for Wednesday, January 5th at 7:00 p.m. has been rescheduled. The Board will meet on TUESDAY, January 12th at 7:00 p.m. at the Village office.
Posted by Leesa Bartu at 2:00 PM No comments: 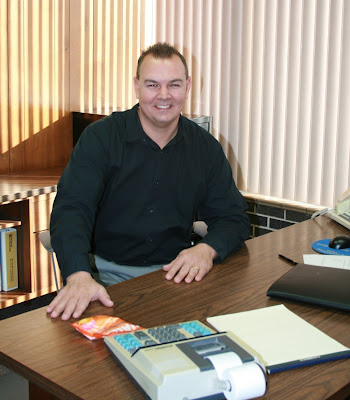 A desire to be a part of the banking industry and an agricultural background make Todd Johnson a perfect fit for the Loan Officer at First National Bank in Exeter.

Originally from Syracuse, Todd and his wife, Gina, along with their three children, have made their home for the past few years in Friend while Todd was part of farming operation. Prior to that Todd spent several years in the golf industry working as an assistant golf pro in Kansas City.

"I wanted to get into the banking industry and I heard about the position open in Exeter. Right now I am doing a little bit of everything," said Johnson.

Bank President, Alan Emshoff, expressed his enthusiasm at the hiring of Johnson, "We are glad to have Todd here. He'll bring a wealth of experience with his knowledge of the ag industry. He has good communication and people skills which are important in our business."

"Todd will primarily work with agriculture but he will also service all consumer, commercial and residential real estate loans," explained Emshoff.

Although Johnson officially started his position on January fourth, he attended some special training in Credit Analysis in St. Louis, Missouri recently.
Posted by Leesa Bartu at 9:32 AM No comments:

Posted by Leesa Bartu at 9:30 AM No comments: