On March 16, 2022, Education Service Unit #6 held a Transition Day at Southeast Community College for special education students between the ages of 14-21.  This workshop gave students the opportunity to participate in five different sessions throughout the day.  Students were offered sessions on Paychecks and What they Mean, Adult Life Lessons, Dress for Success, Accommodations in the Workplace, and College Accommodations.  There were also career options available in the following: Military Careers, Health Science Careers, Construction Careers, Computer Careers, and an Automotive Expo.  Four different hands-on challenges were available in floral design, retail, grocery, and event set-up.  Students were also given interest inventories or assessments and also given an opportunity to interview with different businesses from the area who were actually recruiting workers for immediate hire and/or the summer.  It was a great learning experience for the students whether they were going on to college or right to work.  Exeter-Milligan had five students participate in the Transition Day along with Mrs. Anita Mueller, Special Education teacher. 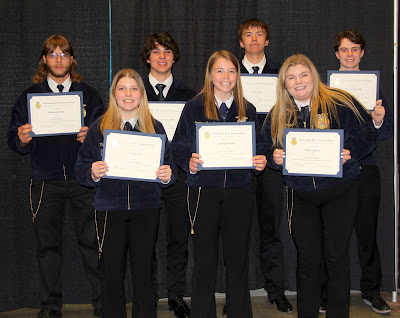 Seven students  in Exeter-Milligan/Friend FFA Chapter received their state farmer degrees at the Nebraska State FFA Convention last week.  Pictured in the front row from the left are Vivian Weber, Cameryn Brandt and Kiah Songster.  In the back row are Ben Bartu, Christian Weber, Cade Kresak and Fred Hausman. 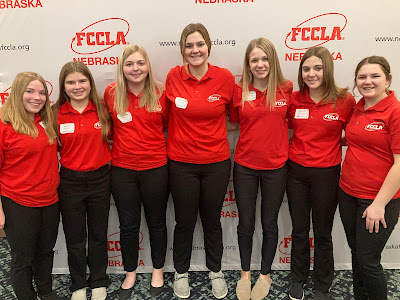 Over 400 FCCLA members and advisers from across the state attended the FCCLA Peer Education Conference in Kearney at the Holiday Inn on Monday, February 28.  "Small Changes, Big Impact" was the theme for the conference that was planned and led by members of the State Peer Officer Team.

During the opening session, members of the State Peer Officer Team were introduced and shared information about their National Programs.  Finalists for the Family Leader, Career Leader and Community Leader State Peer Officer Team were recognized.   Chapters who participated in the Family Leader, Career Leader and Community Leader Outreach projects were introduced.  The Capture the Action Awards and trophies were presented to chapters.  Winners of the Families First Awards were:  1st - Milford, 2nd -  Howells-Dodge, 3rd - Grand Island Northwest.  Exeter-Milligan FCCLA received a certificate of participation for their Trick or Treat so Others May Eat Food Drive.  Chapters honored for the Career Leader Awards were:  1st - Neligh-Oakdale, 2nd - Kearney, and 3rd Howells-Dodge.  Earning the Community Leader Awards were:  1st - Howells-Dodge, 2nd - Overton, and 3rd - Boyd County. The winner of the 2022 State Peer Education Team Scholarship was Taylor Svoboda from Mullen.

The keynote speaker for the conference was Maile Ilac Boeder from The Leadership Center in Aurora.  Her powerful presentation kept members active and engaged.  Other session presenters at the  conference were Shannon Olberding of Atkinson, who spoke about Body Positivity/Mental and Physical Health, Vanessa Parra who shared her message on Abusive Relationships.  Members of the Overall SPOT Council Leonardo Luna Duran, Troia Drey and Annie Corkle led a session, as well.

This year's Small Changes, Big Impact Conference Outreach Project asked chapters to donate items to benefit the S.A.F.E. Center and Compass in Kearney.  Chapters brought 637 items that were presented to representatives from each of those agencies during the closing session.  State President Kaylee Hilbers of Logan View gave a preview of the State Leadership Conference which will be held in Lincoln on April 3 - 5.  State Adviser Chelsey Greene also addressed the group.