The Village of Exeter is sponsoring a large dumpster this


SATURDAY, June 21 at the City Shop

starting at 8 AM until 2 PM or whenever it gets full.

Items NOT ACCEPTED are: tires, appliances, batteries, oil, paint or shingles.
Posted by Leesa Bartu at 2:52 PM No comments: 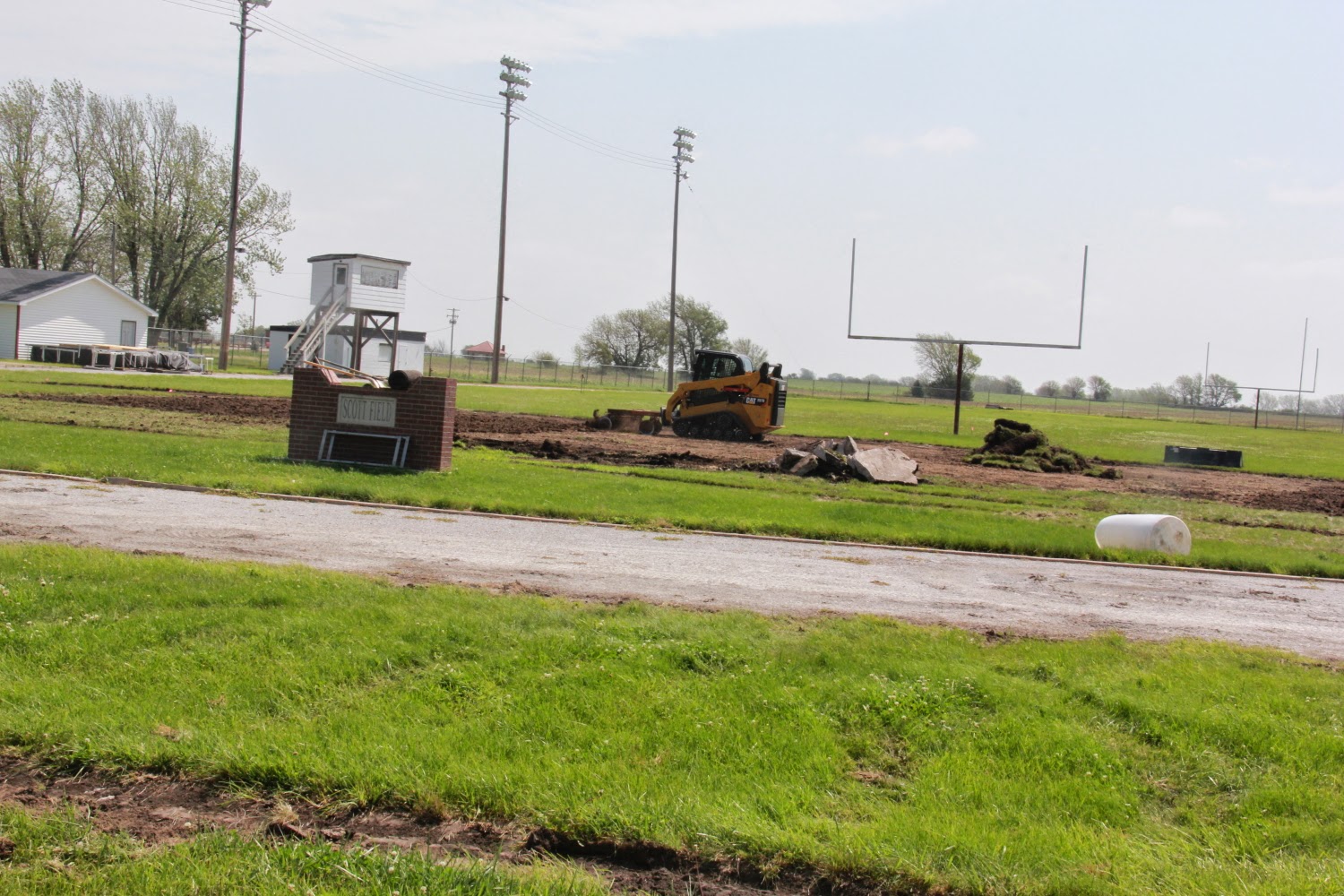 Work on new pole vault runways, a long jump runway, and a large high jump/multi-purpose practice area at Exeter-Milligan began this week.  Much of the sod was removed and placed at different spots at the Exeter campus and at a few of the local parks.
Posted by Leesa Bartu at 7:30 AM No comments: 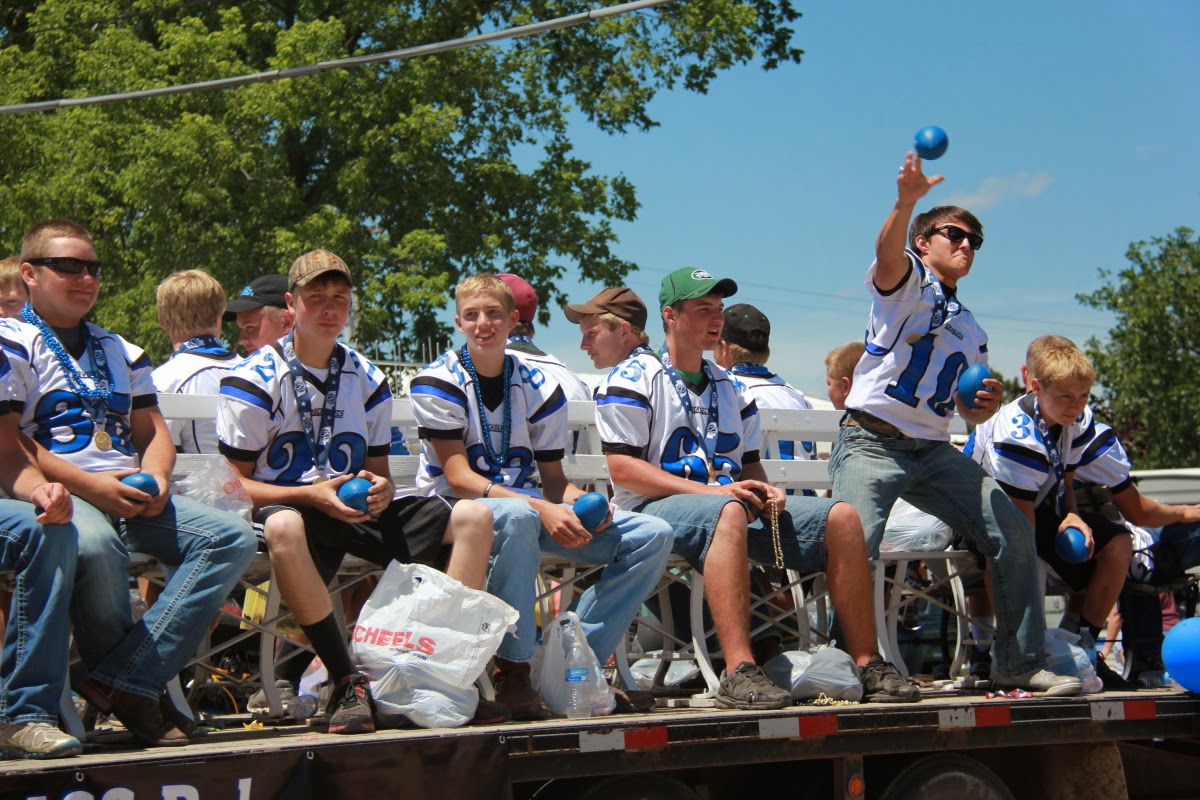 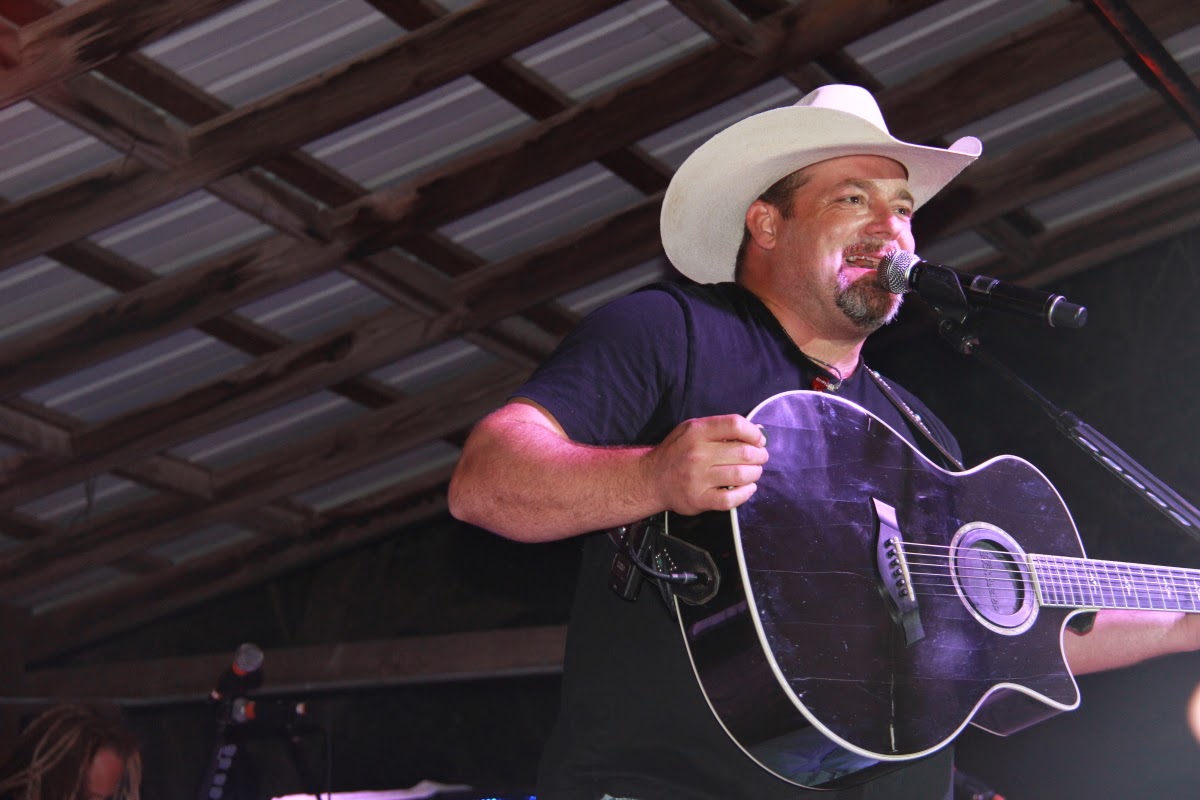 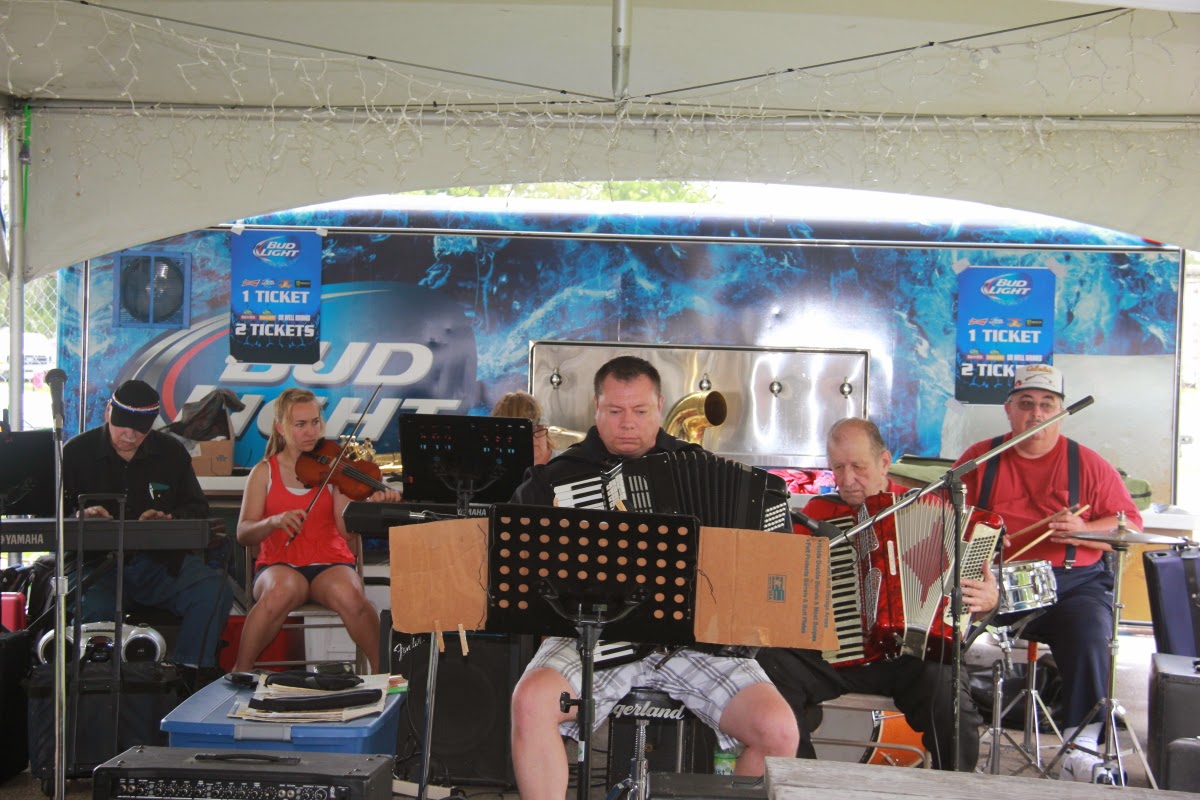 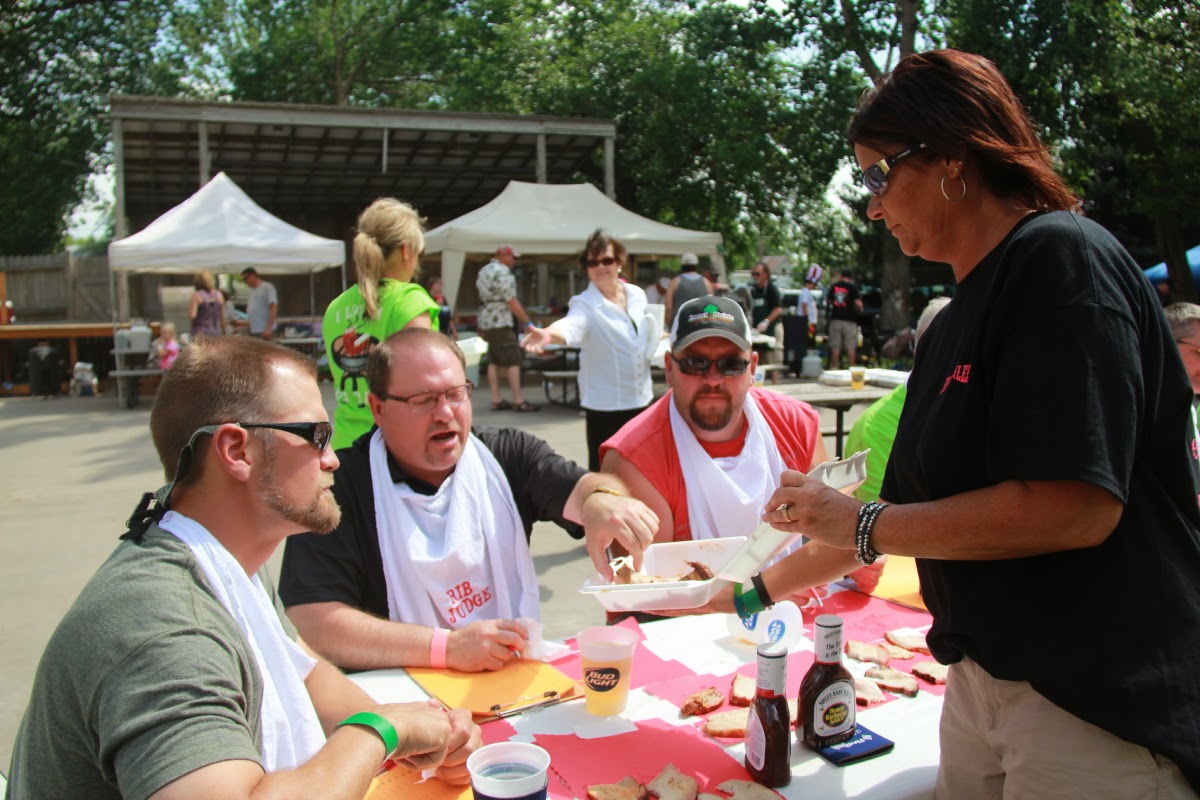 There was something for everyone at the 2014 June Jubilee.  From the Friday night concerts to Sunday afternoon’s parade and polka bands, it was, like the theme,  a giant “parking lot party.”

The weekend started with a tractor drive on Friday morning and Saturday’s activities included a Rooster Run, Softball tournament, Sand Volleyball tournament, a road rally, tractor pull and the annual pork rib and loin cook off.  There was bingo in the afternoon along with polka music.  The evening’s activities included a performance from local favorites “The Rusty Nichol,” and an 80’s cover band, “On the Fritz.”

Sunday was a family day for all, especially since it was Father’s Day.  The softball tournament was cancelled due to heavy rains from the night before but the Polka Mass was a hit.  The Grand Parade featured the 2013 Exeter-Milligan State Champion Football team as the Grand Marshalls.  The Wilber Alumni Band shared the Centennial beer garden with the Milligan Brass Band for the afternoon entertainment.  The kids were invited to make rope, get their faces painted and participate in the kids’ pedal pull contest.

Chris Mussman won the Kolache eating contest before Sue and the Blue River Czech’s took the stage.  The evening ended with an auction of the chainsaw carver’s pieces and other memorabilia from the event.
Posted by Leesa Bartu at 7:30 AM No comments:


The Exeter-Milligan School Board met on Wednesday, June 11 in Milligan with a light agenda.

Under old business the only progress made on a possible building project was the determination that the board needed to look at times for a workshop which included the architects the board has chosen.

Superintendent Paul Sheffield gave a report on the extensive damage to the school from the June 3 hail storm in Exeter.  At the time of the meeting the insurance adjuster had not been to the school and all of the essential items had been repaired with windows boarded up and vehicle taillights and mirrors replaced.

Sheffield also reported that the Preschool room had been cleared out and TYKE representatives had sorted through the supplies in anticipation of the fall term.

Next on the agenda were the activity coop requests from Friend and Meridian.  Sheffield discussed the request from Meridian noting that he had spoken to the new superintendent at Meridian who had expressed “a wait and see attitude.”

As for the junior high football request from Friend, Sheffield explained, “I can see it being a thing where they can participate with our team.  They would wear our uniform and practice with us in Exeter and all the games would be in Milligan.”

Board Secretary Annette Gloystein emphasized, “There would be no team name change and they would wear our uniforms.”

The board gave Sheffield permission to informally present this option to the Friend district.

The board reviewed policy updates to the student handbook.  Sheffield explained the reasoning behind some of the tobacco and narcotic changes.  Some of these changes were in response to the rising availability of hash oil and its legalization for medical purposes in Nebraska.  He outlined the new forms of the oil that are becoming common and how students can use them without administration knowledge.

Sheffield also clarified the schools jurisdiction in searching vehicles in the parking areas at the school with both a drug dog and the policy for firearms.  “The nice thing about our policy is that it is written so that the superintendent can review violations on a case by case basis.  We have kids who might go hunting before and after school or have trap practice or a trap shoot after school. They could possibly have a gun in their vehicle.  Some schools have taken on a zero tolerance policy.”

The board approved the teaching contract of Derek Harlow who will be teaching PE and Title at the Milligan campus.  He will receive a temporary Special Ed endorsement from the state as he is currently working on those classes.

The school board also approved a .05 hike in milk prices which will affect extra milk purchased along with milk tickets in the elementary classrooms.

Extra duty assignments for all of the teachers were reviewed and the board excused member Tom Sluka’s absence from the meeting.  Sheffield showed the new countertop for the kitchen and updated the information on the weight room which has been moved to the south half of the small gym.  The next Exeter-Milligan School Board was set for July 16th.
Posted by Leesa Bartu at 11:32 AM No comments:

Exeter-Milligan graduating seniors chosen to join the squad are James Sluka and Nolan White.  Kick-off is scheduled for 1:30 p.m.
Posted by Leesa Bartu at 7:30 AM No comments: