The Exeter Village board reviewed the minutes from last month and approved the invoices quickly before moving on to a fairly lengthy agenda.
First up before the board, was a multi-jurisdictional hazard mitigation plan.  Clerk Becky Erdkamp explained that this plan was a prerequisite to qualify for FEMA funds if there is an incident. The board accepted the plan under Resolution 16-03.
The board approved a lot split submitted by Bob Ruhl.
Board member Justin Harre asked the board about their assistance in upgrading the infield at the ballfield.  He reported that members of the ball association have investigated the possibility of using an agri-lime product on the infield.  “I would like to see if the board would help pay for the agri-lime on the ballfield.”
He estimated that the cost of 25 tons would be around $800. “The ball association would take care of hauling, application and getting the equipment.”
One concern that was discussed involved the upcoming merging of the Exeter and Milligan ball associations. The board raised the question of needing the approval of both ball associations on the improvement.
Chairman Alan Michl noted that “If we do this it won’t happen this season but they (the Ball Association) are at a point where they need to line all of this up and get things going.  In retrospect it is a pain when games don’t get played.”
The board voted to make a financial commitment to upgrade the ball field with no specified amount.
Clerk Erdkamp passed along a request for the aquatic center to be open for adult water aerobics daily from10:30 to 11:30 a.m.  She explained to the citizens that a pool manager and a lifeguard would be required to be present and there were a lot of logistical issues.  After a discussion the board suggested water aerobics be held during the 5:30-6:30 p.m. adult swim time.
The board mentioned a recent article about the person who now owns the Exeter and Edgar care centers.  The Edgar center is being revitalized now and the article claimed the owner will not work on the Exeter center until Edgar is running. Vice Chairman Tim Wilbeck commented, “I’m afraid that by the time they get around to Exeter the building will be shot.”
Michl noted that the Tag Factory demolition contracts have been signed with a start date of June 15th.  He also informed the board that the contract requires a completion by September 1.  “Apparently when he starts here, he will be here until he finishes.  He will be stacking concrete road barriers between the Modern Products building and the Senior Center.”
Next on the agenda was Brian Murphy who asked the board to re-open Cheyenne Avenue just north of the football field.  He has purchased the property and does not have access to the middle lot without the street reopened.  The board informed him that each property owner would have to sign over the land for the street without payment from the city. Once the land is deeded back to the city they will be able to repeal the ordinance that closed the street.
Under the maintenance report Kevin Kruse from JEO presented information on the drainage on North Empire street from North Depot to Boundary.  For surveying JEO used LIDAR technology (a surveying technology that measures distance by illuminating a target with a laser light) to see the elevations where the water is flowing.
Kruse shared the results of the surveying with the board using color coded maps.  He recognized that “There is very little change in elevation is some areas.  By a couple of feet there is a high spot on Otoe Street.”
Kruse presented three options for drainage.  The first option would be to put in a ditch from the north end of town to an existing pipe.  According to Kruse the issues with this option include the high spot on Otoe where the ditch would have to be four to five feet deep.
The second option would be to bury a pipe and put inlets in place and the third option would be to work with the high spot on Otoe and send the water on the north side of the high spot north, and the south half to flow south.
Kruse explained that “All of these options have drawbacks.  We need to make sure we are on the same page before we start making plans.”
Michl asked about the costs for ditches and pipe.  Kruse estimated that ditches might cost about $5000.00 while concrete pipe would be about $50 per installed foot, about $1500 a block.
There were no decisions made on the draining issues but the board did prefer the option that would send the water in both directions..
Maintenance supervisor John Mueller reported that lightening hit the well controllers on May 27th.  He is working with insurance to replace them.  He started fogging for mosquitoes last week.
Mueller also reported that the Nebraska Department of Environmental Quality inspected the wastewater treatment plant and everything went well.
While the ceiling specialists were in Exeter at the school Mueller got a quote for replacing the ceiling tile in the fire hall.  The cost for new tile would be $1900 not including the removal of the existing tiles.
As a follow up to the last meeting Mueller reported that the estimated cost of installing new sewer lines on the two streets that were discussed would be $157,000.
Clerk Erdkamp reported on the International Clerk school that was held in Omaha last month.  Sales tax income from the month of March was 17,144.26 and for April, Keno was $326.19 .  The next meeting will be July 6 at 7 p.m.

The Exeter Aquatic Center will be holding Red Cross Certified Swimming lessons during the week of June 20th and June 27th  (No lessons will be held on Thursdays).  The class start at 8 a.m. but you will need to contact the Aquatic Center at 402-266-3001 to register and get the start time for your child.  Cost is $35.
Posted by Leesa Bartu at 7:30 AM No comments: 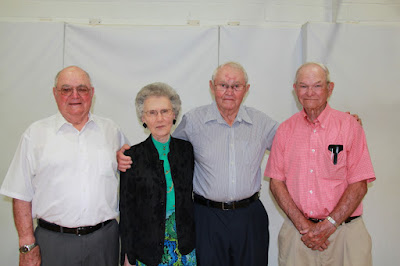 From the left: Sterling Dyer, Joan Dumpert, Dale Due and Boyd Gentry
Posted by Leesa Bartu at 7:30 AM No comments:

President Marysz Rames welcomed audience members as Wayne State College hosted commencement for graduate and undergraduate students on May 7.
Of the 393 students graduating with their bachelor's degree, Jalen Robert Maxson of Exeter received his Bachelor of Science in Business Administration/Marketing.
Posted by Leesa Bartu at 7:30 AM No comments: 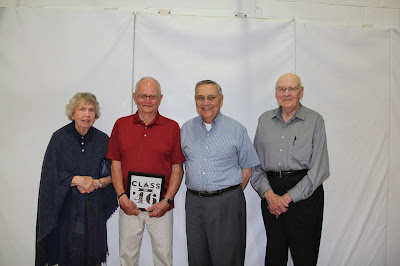 The Exeter class of 1946 from the left Louise Spencer, Kenny Due, Al Crick and Robert Trauger.
Posted by Leesa Bartu at 7:30 AM No comments: 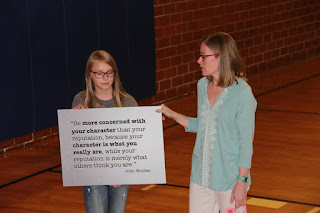 The Exeter-Milligan sixth grade class held their “Health Rocks” graduation on Friday, May 6th at 1 p.m. in Milligan.

Principal Laura Kroll spoke first and explained why the district changed from the DARE program to the “Health Rocks” program that is a curriculum from the 4-H Healthy Life series.

“The DARE program we had been using for so many years hadn’t changed and seemed outdated.  We were looking for something new.”

At the same time, in a different conversation Jolene Frook, the coordinator of the Fillmore County Coalition, discussed the program with Superintendent Paul Sheffield.  The dots were connected and the Exeter-Milligan embraced the new program.

The group started by learning about the different body parts and functions and then moved on to learn how smoking affects the parts of their body.  They also learned about how alcohol negatively affects their brain development until the age of 25.

The class did a lot of moving in class.  They did some role playing and they also got to experience the “beer goggles” and what it is like to walk around with two times the legal blood alcohol limit. Frook noted, “They all learned that no one could walk a straight line with the goggles on.”

The class explored peer pressure issues along with social media etiquette.  They also talked about drug usage and the importance of sleep.  The learned the many dangers of binge drinking and the long recovery time that a body needs after binge drinking.

The students made a video on what they learned in the class and played it for their parents.  During the graduation Frook called each of the students to the front and talked about their character strengths.  She noted, “Everybody in this class knows how to make good decisions.” 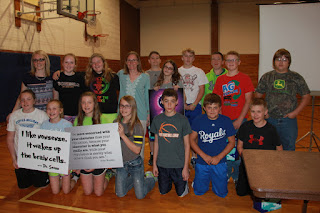