The purchase of a used dump truck along with the continuing discussion on several properties in town were the highlights of the Exeter Village Board meeting Tuesday, Oct 7th.

The first item on the agenda was a discussion on the 125 health benefit plan the village has been trying to replace for its’ employees. Clerk Becky Erdkamp noted, “None of  us are eligible for a Health Savings Account or a flexible spending plan and we have decided to take it as part of our wage.”

The board discussed this option and will pay the amount they employees were previously given monthly in the flexible spending accounts as part of their regular wage.  When the employees are given their yearly review any changes that need to be made will happen then.

The discussion moved on to the Tag Factory.  Since the last meeting the board has had an outside engineer come to inspect the building and just received the engineer’s report.  According to the report,  “the building is beyond any reasonable repair.”

Chairman Alan Michl, “We do not own these buildings yet.  They recommend we contact the owners of the building to see what their plans are.  What’s really sad is that it’s a cool building.  This is more of an information thing than anything. Becky will forward the information to the owners.”

Board member Mitch Schlegelmilch responded, “I feel we need to do something.  I know it’s a costly endeavor, but who else is going to do anything?”

Audience member Brian Murphy noted, “I would like to see some of the exterior tag factory ornamental items salvaged that have historical relevance.  If the building has to come down the ground will have to be compacted to 100%. I just want to make sure the board doesn’t go short-sighted and make sure the land is buildable again.”

There was discussion on different options for covering costs if the building has to come down.  Schlegelmilch was concerned that the owners would be upset about the village hiring an engineer.

Michl responded, “We have a letter from our village attorney telling us we need to do something since we have bricks falling in the street.”

Clerk Erdkamp noted that they have had several reports of roofing materials blowing on to main street from the building.

The Board discusses several nuisance properties in town.  Michl noted that he and Clerk Erdkamp will compose letters to the property owners.

The Board reviewed a water lien on a property in town that the bill needs to paid for by Friday.  The Board approved the lien.

It was reported that Chairman Michl and Village Maintenance Supervisor John Mueller attended the State of Nebraska surplus auction and purchased a 1999 GMC dump truck with 130, 000 miles on it for $9800.
They reported preauction prices were $13,500.  They also purchased a salt and sand spreader for $108 and an extra one for parts.

Mueller noted that he had received a bid from Magnum Builders for the village hail damage repairs and it is less than the insurance estimate.  Mueller reported that the warranty on the roof was voided due to the hail.
Mueller reported that he will get some gravel and he is also checking on when the street repairs can be done.  Board discussed possible locations to start street repairs.

Clerk Erdkamp reported the July sales tax was $14260.61 and the August Keno was $623.09.  She informed the village that the library computer died and a new one was purchased.  She also passed along the information that the librarian will be attending the Rural Nebraska Librarian Conference soon.

The next meeting was set for Monday, November 12th. 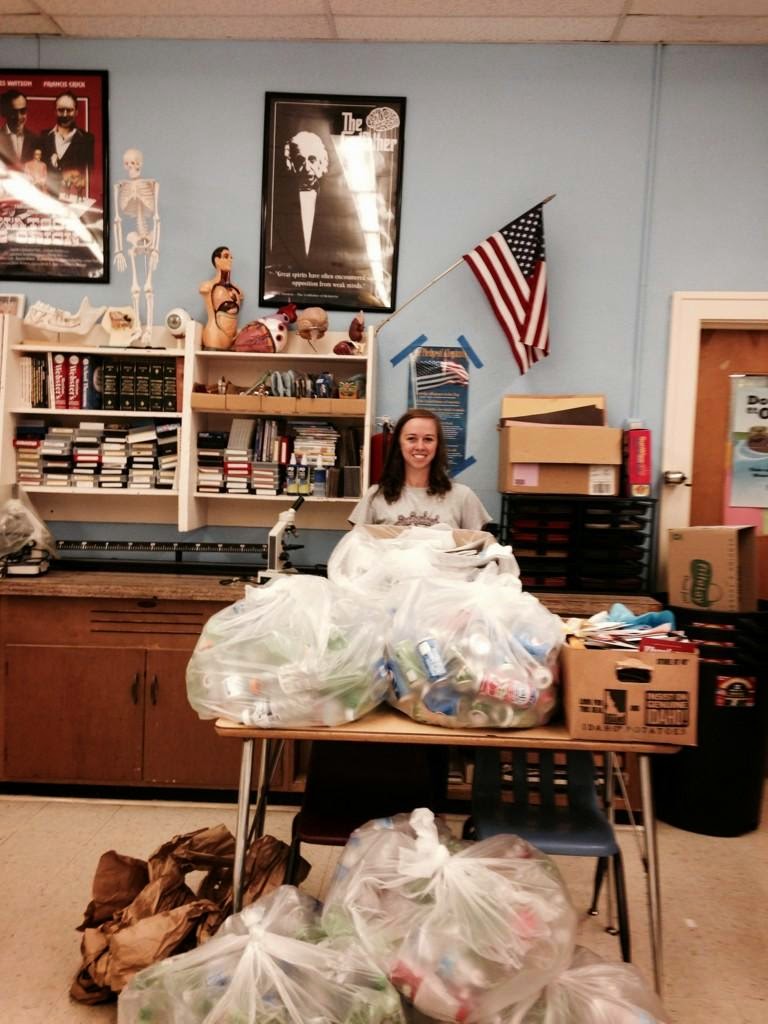 The Biology II class is recycling.   At the beginning of the school year, Ms. Sliefert and Janey Due discussed a project they could do for the class.  Now, Janey is starting a recycling program in the Exeter School building.   We decided to start small with just paper, bottle, and cans.   Now every Friday, you see Janey walking from classroom to classroom collecting all the material that has been recycled.  Currently we are taking the bottles and cans downtown to the trailer to recycle.  We are working on getting the our garbage collector to pick up the recyclables at the school. During the Outdoor ED day with the 2nd grade class, Janey discussed the importance of recycling and had the students make pencil holders out of soup cans. Please help Janey with her project.   She will be collecting all the pop bottles at the home games.
Posted by Leesa Bartu at 7:30 AM No comments: 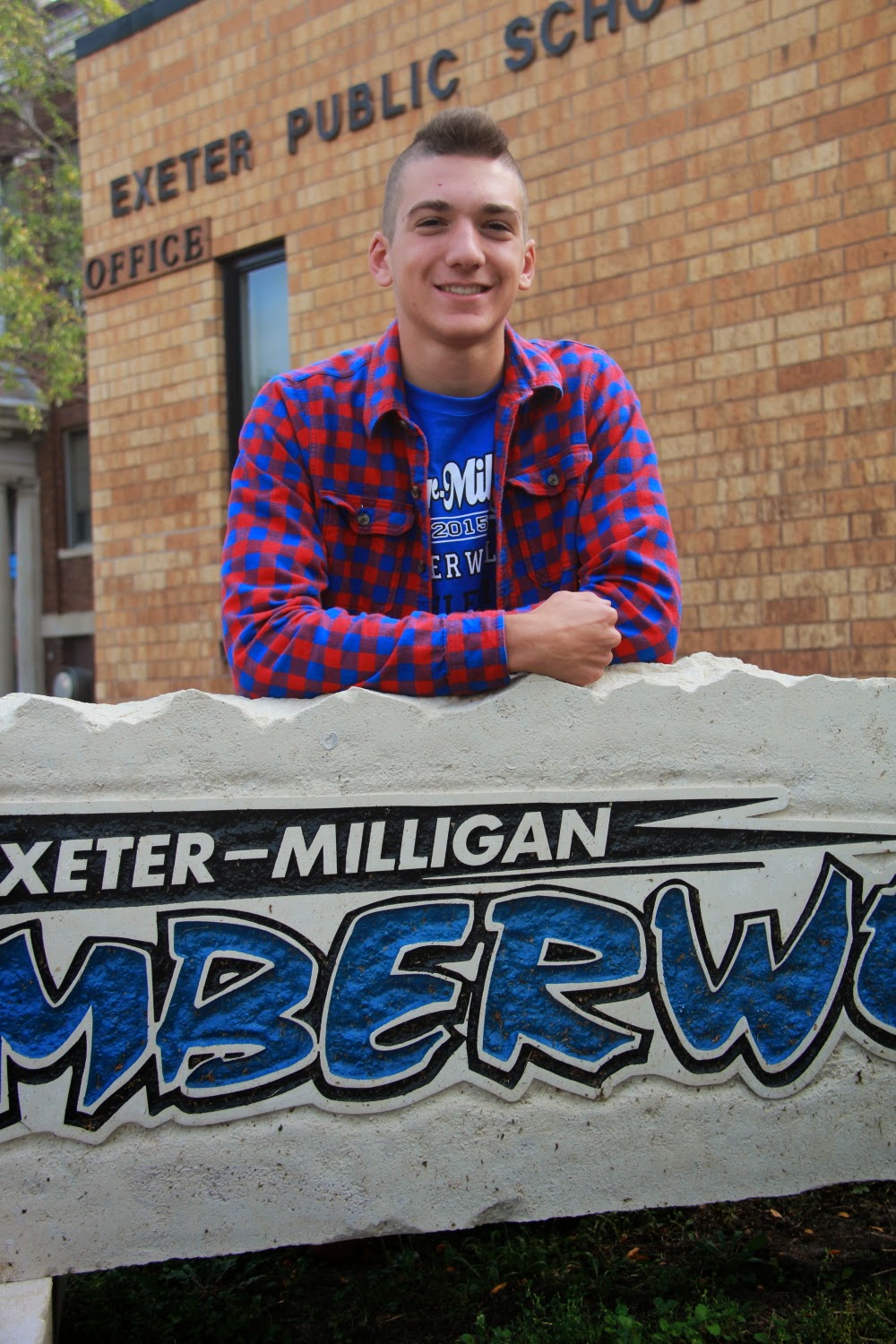 It’s a long way from Parma, Italy to Exeter, Neb. but Samuele Colombo is very glad he made the trip.

Colombo is living with John and Anita Mueller and their children Broc and Tara this year.
“The main reason I came was to have a great adventure.  I am interested in the language and wanted to change everything and start from zero and see what happened,” explained Colombo.

So far that adventure has panned out for him.  “Everything is going the way I hoped.  I am playing football.  It is a great way to have a lot friends and everything is easier with Broc.  He has a lot of friends.  I am not very social in Italy so I decided to change this part of me.”

The area of Italy where Colombo is from is known as a food valley, famous for their cheese and wine.  “I miss food in general but nothing in particular.  I miss my family and going to eat at my grandmother’s home every Sunday.  I miss my bike,” Colombo noted.

He has discovered a whole new world of food here in America, particularly BBQ.    “We don’t grill or bbq food.  I had ribs and they were wonderful.  We don’t do all of the salsa either.”

Colombo is enjoying the sporting experiences in America, as well.  At home his sport of choice is mountain biking, so playing a team sport is something he hasn’t done since he was a child, “I think the greatest thing about football or basketball is the spirit and it is so good here.  Lots of people who support us – lots of screaming and cheering.”

On the flip side, football has been the hardest thing for him to adjust here, but mainly because he hasn’t done them since he was younger, “I am rediscovering the pleasure of team sports.”

Another thing he likes about America is the organization, “We don’t have great organization (in Italy).  I love the school here.  We have great teachers and great organization.  In the town, too, the streets are planned out.  At school all the students know what to do and where to go.  It’s not like this in Italy.”

When he returns to Italy he will have one more year of school.  Right now, Colombo wants to be a barber. “Five years of practice in shaving is the old tradition.  I hope to shorten that up.  I wouldn’t want to work in an office.  I would like to have a little barber shop where they come and visit and have something to drink.”

So far the Mueller’s have taken Colombo camping and he enjoyed that.  “I love the mountains and we will take a trip to the mountains this year so I can see my mountains,” explained Colombo.

He will miss his spear fishing and his home in the mountains where he fishes in the summer and snowboards in the winter, but Colombo looks forward to more adventures in America.

Posted by Leesa Bartu at 9:56 AM No comments: 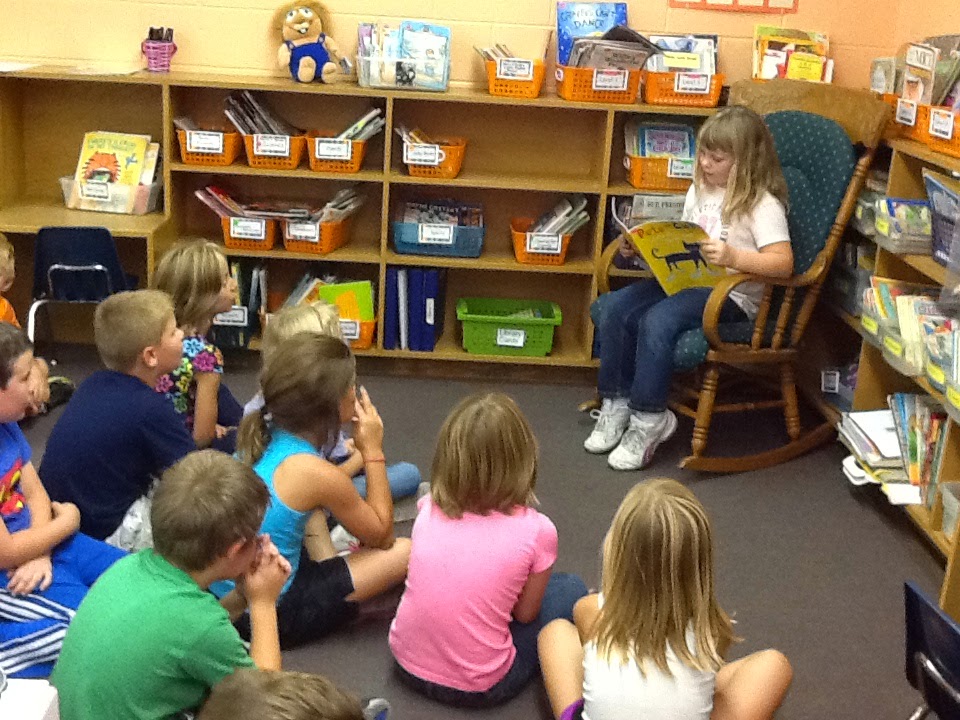 Mrs. Sharon Lott's First Grade class at Exeter-Milligan has a Reader of the Day every day. Each first grader picks out a book at their reading level with the help of the teacher, practices reading it and putting expression into it. Then, they read it to the class. This helps to improve their fluency and builds their confidence in sharing with a group. Our Reader of the Day in this picture is Kate Hale.
Posted by Leesa Bartu at 9:32 AM No comments: 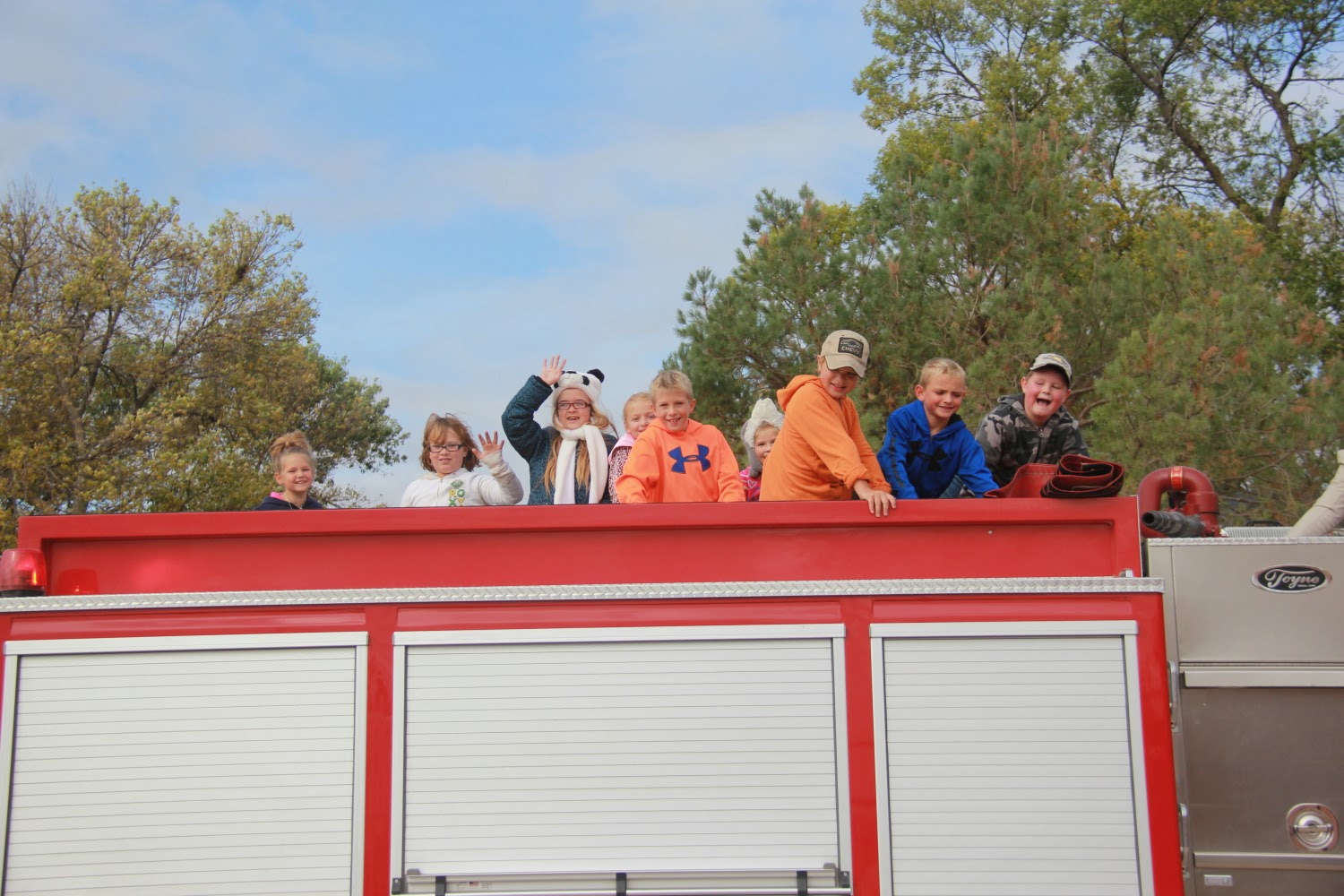 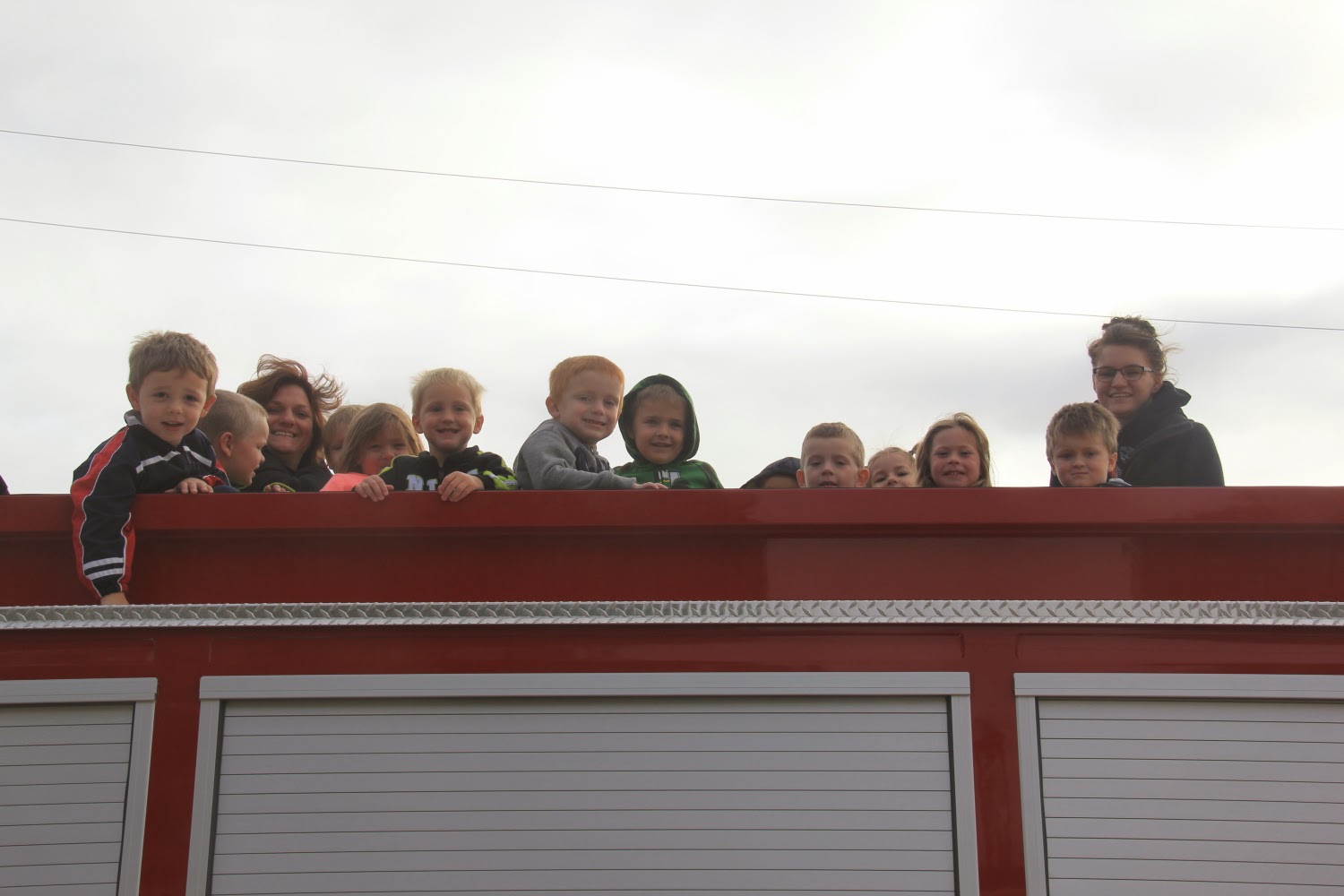 The TYKE class takes a ride on the top of the fire truck first. 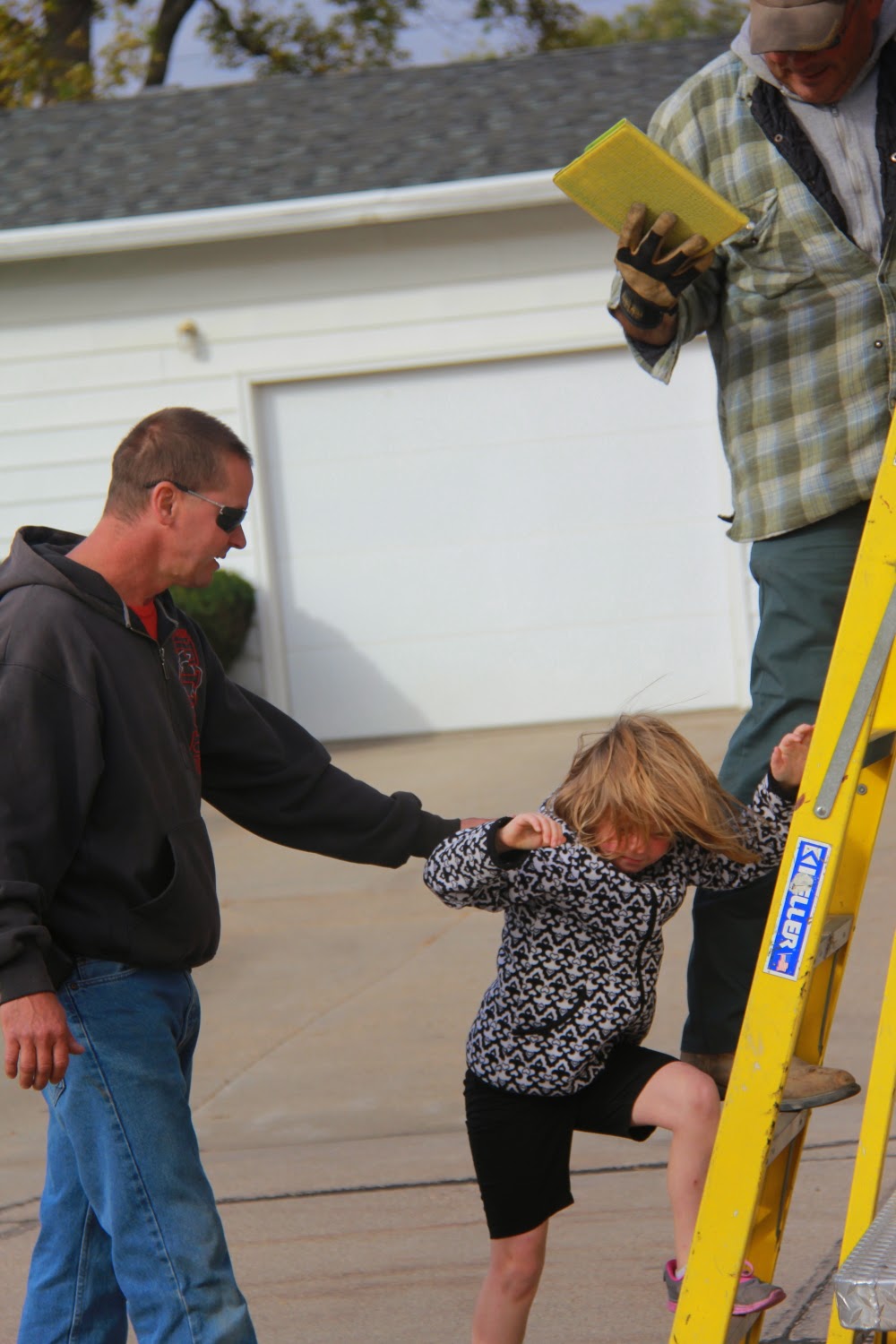