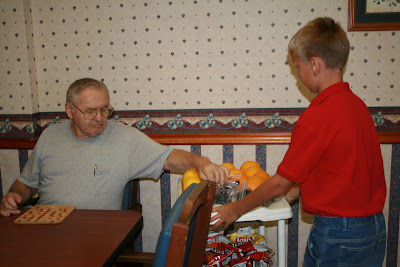 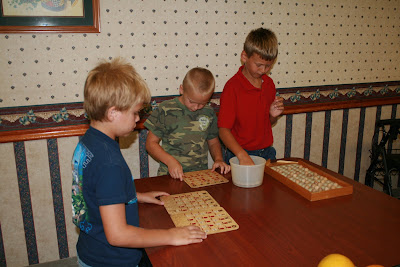 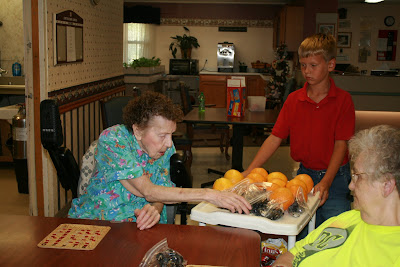 Clint Oldehoeft presents the snack cart to El Jensen after she Bingo's.
Exeter Cub Scouts enjoyed playing and calling Bingo recently at the Exeter Care Center.  Three scouts, Braden Capek, Clint Oldehoeft and Ben Bartu participated in the event. The boys enjoyed taking turns calling the Bingo numbers and passing out snacks to the residents.
Posted by Leesa Bartu at 8:05 AM No comments: 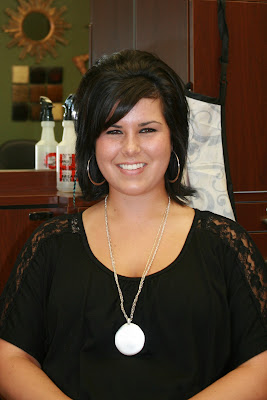 Exeter's Salon C has a new stylist with a familiar face.
2007 Exeter-Milligan graduate Brittanie Schlueter has returned home to Exeter to work at Salon C.  Schlueter attended college and then graduated from cosmotology school.  She specializes in cuts and colors Tuesday through Saturday in downtown Exeter. As Schlueter has a 2 1/2 year old herself she works well with children.
Posted by Leesa Bartu at 8:58 AM No comments: 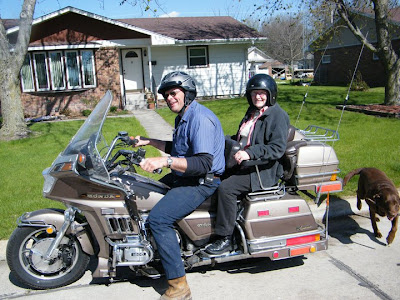 Frances Becwar never imagined that a conversation at coffee one morning would help to fulfill an item on her bucket list.
During morning coffee in downtown Exeter months ago a group at the table shared their hopes and dreams.  Of course, many wanted to travel and see the world but one wish in particular was noticed.  Frances Becwar noted that "on my bucket list I want to ride a motorcycle, go to New York City but no bungee jumping."
Margaret Petro, a lifetime resident of Exeter, took note of Becwar's list item and started thinking.  She involved her brother John Mueller who owns a touring motorcycle that accommodates a passenger comfortably.
Petro talked to Mueller about helping fulfill Becwar's dream and when they found out her 85th birthday was approaching, they decided to incorporate the two events.  Mueller stopped by Becwar's house and offered her a ride.  She "enjoyed the ride and would definitely go again.  We went about four miles out of town and then turned around and came back."
Becwar also celebrated her birthday visiting her son and daughter-in-law in Nevada.  It was her "first and only motorcycle ride.  I have no plans to buy a motorcycle."
Posted by Leesa Bartu at 8:44 AM No comments:

The Exeter 14 U State Champions will be honored at the Exeter Volunteer Fire Department Street Dance on Saturday, July 23rd.  The team's accomplishments will be recognized in a ceremony between 7:30 and 8:00 p.m. at the street dance.  Come congratulate our Exeter team!
Posted by Leesa Bartu at 9:42 PM No comments: 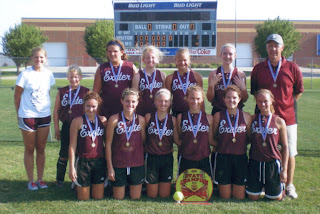 
On the weekend of July 8-10, the Exeter 14U girls softball team participated in the ASA Class C State Softball Tournament.  The tournament was held at the Smith Complex in Hastings.
The girls finished the tournament with a record of 7 and 1.  They came home with the Class C State Championship.
On Friday afternoon, they opened the tournament with a 10 -0 win over Creighton Thunder.  Friday night they defeated Pizza Ranch (West Point) 5-4, scoring 3 runs int he bottom of the 7th inning.
The continued play Saturday defeating Tekamah-Herman Purple 6-2.  The next game was against Emerson. Exeter came out on top 9-8, to advance to the winners' bracket final.
In the first of four straight games on Sunday, they faced Arlington Vets Club.  They suffered their first loss of the tournament 7-3.  The loss dropped them to the losers' bracket, where they again faced Emerson. This time they won 6-5 in 8 innings.  With this win, they moved in to the finals to face Arlington Vets Club.  To win the championship, they would have to defeat Arlington twice.  The first game was close all the way with Exeter trailing 1-0 going to the bottom of the 7th inning.  Erica Yound led off with a triple.  With two outs and a count of two strikes, Janey Due doubled to drive in the tying run.  Hailey Luzum reached on an infield hit and the winning run scored on an overthrow.
With the 2-1 win, Exeter moved in to the second game against Arlington which would decided the championship.  Arlington scored one run in the top of the first inning.  Exeter scored two runs in the bottom of the first and two runs in the bottom of the third, going on to win 4 -1.
Marissa Howard was the winning pitcher in five of the tournament wins, with Madison Horne picking up the win in the other two victories, including a five hitter in the clinching win over Arlington.
Leading hitters for the tournament were:  Madison Horne with 13 hits, Maitlyn Thomsen and Marissa Howard with 11 hits each, Lindsey Stoldorf with 9 hits, Erica Yound with 8 hits and Janey Due with 7 hits.
Exeter finished their season with a record of 23 wins and 5 losses.
Posted by Leesa Bartu at 8:55 AM No comments:

Swimmers from Exeter and Milligan braved the chilly morning waters at the Exeter Aquatic Center for Level 5 and 6 lessons weekday mornings at 8 a.m.  One of the last days of their lessons the swimmers had to come dressed in jeans and long sleeves shirts and jump in fully clothed.  With their swim suits underneath the students had to practice treading water and remove their outer clothes simulating an accidental water entry.  Then, they used their long pants and shirts to make a flotation device.
Tara Mueller was the first brave swimmer to jump in with her clothes on Thursday morning at the Level 5 and 6 swim lessons.  The other swimmers watching her from the left are Jacy Schlueter, Mitchell Manning, Instructor Alex Shaner, Blake Stueben, Instructor Madeline Baltzer, Joey Bartu and Patrick Murphy.
Posted by Leesa Bartu at 8:46 AM No comments:

For Kids:
Diary of a Wimpy Kid DVD
Posted by Leesa Bartu at 10:21 AM No comments:

All adults are welcome at the Exeter Aquatic Center on Monday Wednesday and Friday from 5:30 - 6:30 p.m. for an ADULTS ONLY Swim.
Posted by Leesa Bartu at 10:20 AM No comments: