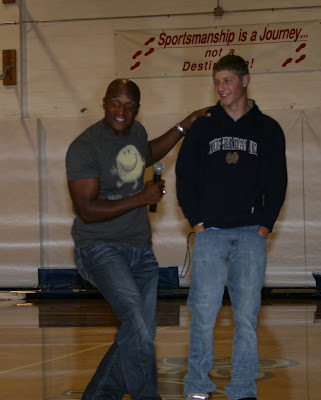 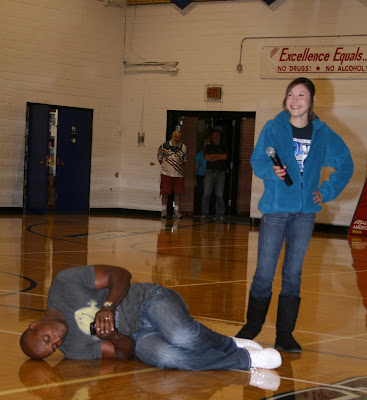 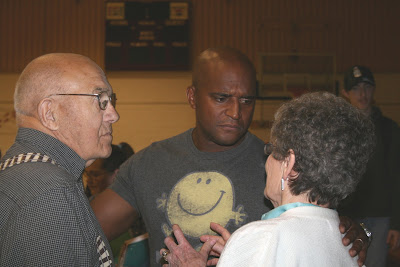 Aaron Davis, center, spoke to the Exeter-Milligan junior and senior high students on Tuesday morning. Community members Kenny (left) and LaVonne Guthrie (right) spoke with Davis for a few moments after his inspiring and entertaining speech.

“I’m not going to preach to you, that’s not my style. I’m going to talk to you about options and choices,” was the explanation that Aaron Davis gave to Exeter-Milligan junior and senior high students Tuesday morning.

Davis, a member of the 1994 Nebraska Husker National Champion football team, gave examples from both his experiences on the football team and how the choices he made affected his life even today.

He grasped the attention of the audience immediately with his humorous wit, sharing the difference between girls and boys especially when texting. According to Davis girls text and text and go on and on and boys often answer with one letter, “k.”

Interspersed with the humorous bits Davis shared about goals and reminded all, “It’s not so much where you’re at, it’s where you go with your life.”

To bring that point close to home he asked the students how many thought there was nothing to do in town. When just about every student raised their hand, he told the students that a group of 3500 students in Oakland, Calif thought the same thing about their town just across the bay from San Francisco. He talked about the great support that small communities have for their schools and quipped, “There is nothing wrong with seeing and going other places but don’t forget about people here, there is nothing like Nebraska. Don’t be so quick to leave something so good.”

But at the same time Davis encouraged the students to “Chase your dream. I hope and pray you never stop dreaming. Find what you love and be careful who you associate with,” said Davis.

Davis changed his tone and got serious on the crowd the last fifteen minutes of his talk. He spoke about how as “we age we start caring about what people think about us but don’t realize that other people are too busy thinking about themselves to look at us.”

In his consulting business, Davis advises corporations on hiring and he turned his focus to the subject of technology and its impact. He emphasized several times to the students the permanence of what is put on the internet. He spoke to the students about their use of Facebook and how it can follow them for the rest of their lives, even affecting their job opportunities.

During the difficult teenage years, he reminded students that there is a difference between “friendships and faceships. A real friend will look you in the face and tell you when you’re doing something wrong. Show me your friends and I will show you your future.”

Davis talked about his own experiences in high school and how he didn’t fit in because he didn’t drink. His senior year he began to compromise and he talked about the consequences of those choices, “If you have to give in to fit in then it is time to get out of those relationships.”

To close Davis asked the students to make good choices and to remember that “they shouldn’t have to compromise." Davis was brought to speak to the students by the Exeter-Milligan Academic Booster Committee.

Exeter-Milligan School kicks off homecoming week with a series of dress-up days:

There will be a pep rally downtown on Friday on Main Street in Exeter at 3:00 p.m. and the public is invited to attend.

This year's attendants include:

The Crowning of the King and Queen will take place on the football field immediately following the game. Exeter-Milligan will be playing Meridian Friday night at 7 p.m. in Milligan.
Posted by Leesa Bartu at 9:37 AM No comments: