With several additional events the community of Exeter definitely added more fun in their "Fun Days" event this year.
In addition to the street dance sponsored by the Volunteer Fire Department, residents and guests were treated to a number of new and improved events.
The Fun Day started with a Car and Motorcycle show which was held downtown and sponsored by the Exeter Chamber of Commerce.  Trophies were presented in four different classes.  Exeter's own 2011 National American Miss Nebraska Junior Teen Deidre Stevens presented the trophies at the event.
Jim Smith of Friend placed first in the motorcycle division with his 1946 Harley Davidson.  Charlie Trauger placed first in the classic car division with his 1969 Chevy Impala.  Tom Husa of Exeter placed first in the Muscle Car division with his 1969 El Camino and Tim Wilbeck of Exeter placed first in the new model car division with his 2010 Mini Cooper.
The annual softball tournament hosted 12 teams for the daylong slow pitch festival down at Gilbert's Park fields and the Exeter Aquatic Center hosted all kinds of kid friendly games and fun. The Village of Exeter had a free swim for everyone and the Exeter Aquatic Center sponsored games and fun for all of the kids.  Kristen Hanneman organized all of the games and also provided the goodie bags and many of the prizes.  Each child received a prize and good bag before leaving.
The Exeter Chamber of Commerce donated two $20.00 Chamber Bucks certificates which were won by Jonah Bitz and Vicki Androyna.  Casey's General store provided two pizza and pop gift cards along with other prizes.
In the late afternoon the Exeter Volunteer Fire Department held a poker run before the street dance started.  This year the 10 and under and 14 and under softball teams served the food at the street dance and the fire department made a generous donation to help pay for their recent state tournament entries.  During the street dance the 14 and under softball team was recognized for winning the state softball tournament. 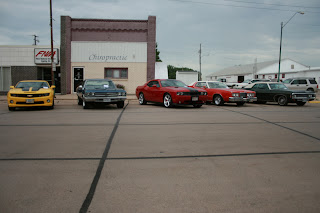 The Exeter Chamber of Commerce sponsored a Car and Bike Show at the Exeter Fun Days this year. Exeter Avenue was closed and the cars lined up. 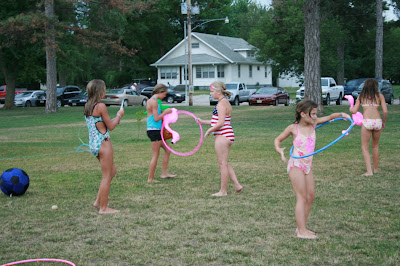 During breaktime at the pool, the kids enjoyed games at the park. 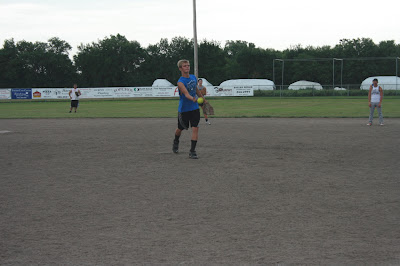 Nate Bigelow, an Exeter-Milligan student, pitches for his team at the Exeter Slow Pitch Tournament. 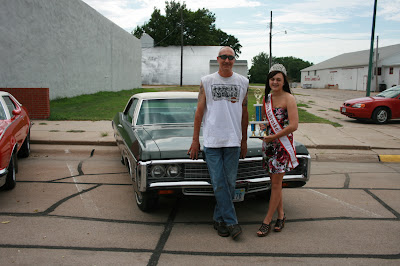 2011 National American Miss Nebraska Junior Teen Deidre Stevens of Exeter presents a trophy for first place in the Classic Car division to Charles Trauger.
Posted by Leesa Bartu at 11:33 AM No comments:

The funds available through the Fillmore County Development Corporation (FCDC) to provide down payment subsidies to Homebuyers for the purchase of existing homes within Fillmore County has been used by several new home owners in the month of July.


The program includes not only down payment assistance through a deferred loan with no interest, but also financial assistance in the form of a conditional grant for minor rehabilitation of homes purchased.


The purpose of the Homeownership Opportunity Program (HOP) in Fillmore County is to provide financial assistance for the purchase of existing single-family residential housing units which are safe, decent, sanitary and affordable to low and moderate income persons/families-buyers. The program provides assistance to those persons/families meeting eligibility guidelines, improves availability of housing, promotes Homeownership, increases attractiveness of underdeveloped neighborhoods and increases local employment. The Fillmore County Development Corporation (FCDC), a non-profit corporation, operates the program.


The maximum home loan subsidy will be $17,000. The subsidy to any buyer shall not exceed the lesser of (1) $17,000 or (2) 20% of the purchase price, or (3) the amount of money necessary to pay the purchase price after expending all liquid assets of the purchaser, which exceeds $5,000, after the 2% down payment requirement. All program applicants are encouraged to secure permanent financing from Fillmore County lenders.