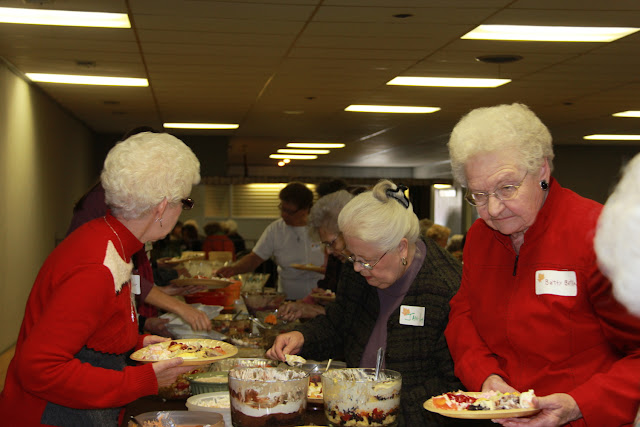 There were tons of salads to choose from as the ladies walked through the line at the St. Stephen’s Altar Society Annual Salad Luncheon and Card Party 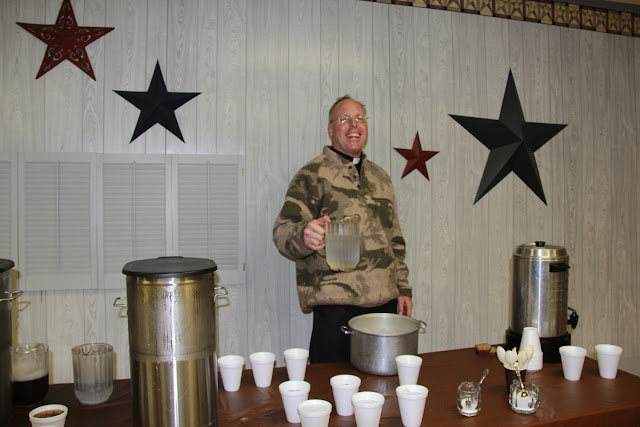 Father Tom Kuffel, priest at Exeter’s St. Stephen’s was in charge of the drink table at the Altar Society Salad Luncheon and Card Party. 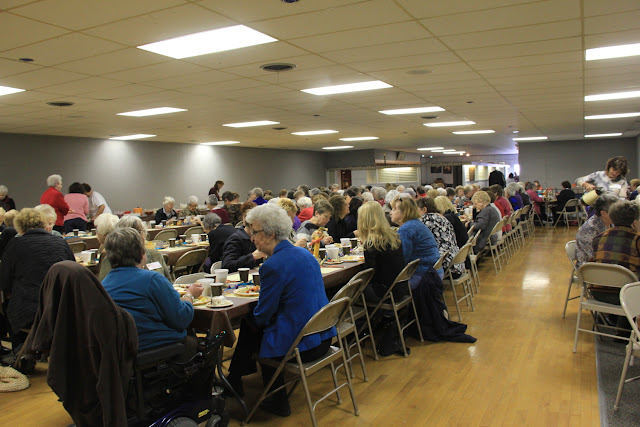 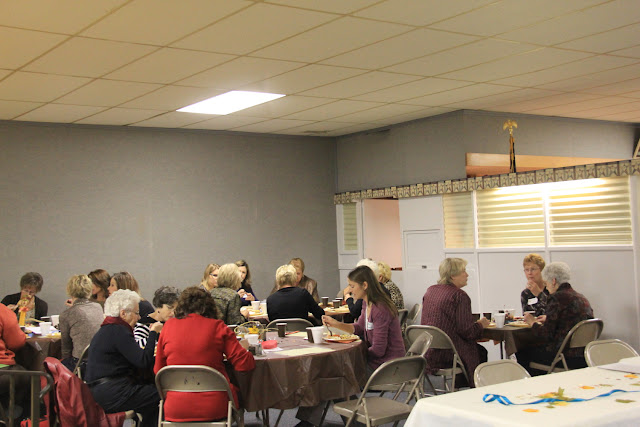 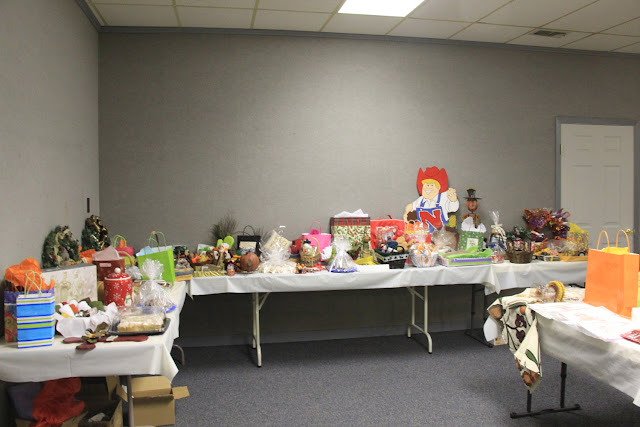 The ladies at Exeter's St. Stephen's Altar Society held another successful salad luncheon and card party last week. The Legion was full and the food was wonderful.  Guests from all over attended the yearly event and enjoyed the food, fellowship and fun.
Posted by Leesa Bartu at 7:30 AM No comments:

This Sunday, November 4th at 2:30 plan to attend the Dessert Theatre Luncheon that is sponsored by the Exeter Milligan FCCLA and the One Act Cast. They will be performing "The Empty Chair" at the Exeter Milligan High School. Cost is $6.00 per person.

Congratulations to the Exeter-Milligan Timberwolves - The ladies won the District Finals Thursday night in Beatrice.  Headed for State!  Best wishes and best of luck to the Lady Timberwolves.
Posted by Leesa Bartu at 10:19 AM No comments: 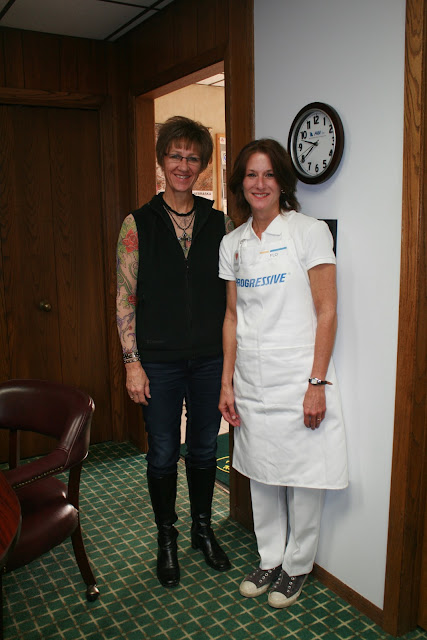 Flo from Progressive Insurance paid a visit to Exeter on Halloween.  She even was even spotted working with Biker Mama on a new policy for her motorcycle at First National Insurance Agency. 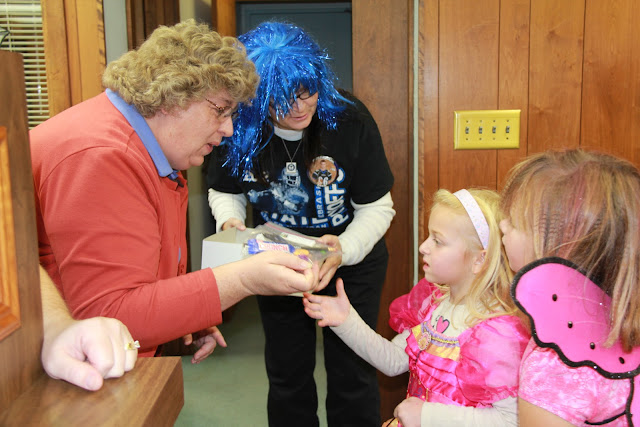 Exeter-Milligan Kindergarten, First and Second Grades trick or treated in downtown Exeter stopping at the Exeter Senior Center, and at businesses in downtown.  Here (clockwise from the left) Pat Rocole and Sharla Dinneen hand out candy to Jolene Vossler and Ayla Kahler.
Posted by Leesa Bartu at 7:30 AM No comments:

Exeter Milligan play tonight in the Volleyball District Finals at Beatrice. They are playing Pawnee City at 7:00pm at the Beatrice High School. No news of radio coverage right now.

Posted by Leesa Bartu at 5:37 PM No comments: 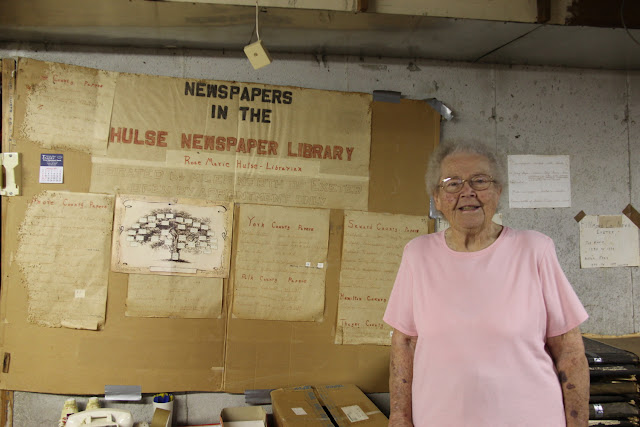 What started as a way to entertain guests at a 50th anniversary party turned into a lifelong passion for Rose Marie Hulse.

When Hulse, a lifelong resident of Fillmore County, began to plan her parents’ 50th anniversary celebration she realized she wanted to do something different.  After a discussion with her mother she decided to decorate an area with a family chart starting with each set of her four great grandparents.

“It drew so much attention.  I left scratch paper nearby for people to make notes or write something if they knew the people on the wall along with their names and addresses,” explained Hulse.

Following up on the notes the guests left, Hulse caught the genealogy bug and it hasn’t left her since.  From her first initial forays she was hooked and found a genealogical society in York to join.  She was elected president after a year but realized that her heart wasn’t in the York club since she and her family were from Saline and Fillmore County.

Next, Hulse heard about the Nebraska State Genealogical society and became a charter member of the group.

In the late 1970’s Hulse organized a Fillmore County Genealogical Society, “The response was unbelieveable.”

The group met in Exeter in the basement of the city office/library until water issues forced them out.  Today the group still meets on a monthly basis at the Geneva library.

Continuing her digging for family and county information, Hulse began reading the area cemeteries.  “I would go and collect the names, birth and death dates and any other information that was on the tombstones.  I took my Dad with me to help read some of the stones in Czech and he would tell such great stories about the people he knew.”

Hulse compiled the information and then created directories for each cemetery in the county except for the Geneva area which other club members read.  Hulse also worked on directories for cemeteries in Saline and southern York County.

When the Nebraska Historical Society advertised in the late 1970’s that they would be emptying a newspaper storage bunker and giving away the papers from all over the state that were already microfilmed, Hulse applied to receive the papers from the area.  “They knew that I was reading cemeteries and donating so much information.  I always wanted full dates of birth and death and who their parents were so I was always going to Lincoln to the Historical Society and getting the information.  To have the papers here would be wonderful.”

Hulse and a group of volunteers brought two grain trucks loads of papers back from the storage bunkers in Mead.  Some of the papers dated back into the 1800’s or were single issue or short run papers.
Hulse cataloged and grouped all of the newspapers and has stored them in her basement since then.  She continues to receive the area papers and adds them to her collection, gleaning the information before storing them. As her amount of information began to increase, the word got out that she was a great source for those seeking geneological information.

Hulse began to get calls and letters requesting genealogical information.  Hulse would gather the information, copy it and send it to the requestor.  Almost everyone responded with gratitude and payment for her time and work.  Hulse got letters from as far away as France, eventually compiling three copy paper boxes of request letters, “I enjoyed looking things up.”

These days, although still getting requests for information, Hulse has retired from doing research for others.  She continues to go through the old newspapers, gleaning the information to record for the Fillmore County Genealogical Society papers as she has time, recording births, deaths, marriages and divorces cataloging them in her system.

All the records Hulse has kept have been handwritten or typed.  She doesn’t own a computer and doesn’t plan on getting one.  “Computers have ruined genealogy in some ways.  People don’t need to come to meetings anymore.  People need to be careful what they find online, there is a danger in not going to the original source, the courthouse always has the right information, not the internet.”

Another project Hulse used her genealogical interests on was the 1988 Milligan Centennial Book.  The 640 page purple book covers the history of the Milligan area along with information on the families who lived there during the 100 years.

To raise funds to publish the book, Hulse and other committee members gleaned news from old Milligan newspapers, created a weekly newsletter and sold them each week.  They included something from each month starting in 1894, noting funny and tragic stories along with births and deaths recorded.

“I’ve met so many interesting people from all over, it’s such a fascinating field.  I’ve made a lot of good memories,” said Hulse.

To start your own research Hulse recommends that you “start with yourself.  Start with your parents and grandparents and go from there.  Keep the information in a notebook with one page per marriage.  Then the children and their information from that family behind that page.  If you get stuck, obituaries are a great place to find information.”
Posted by Leesa Bartu at 7:30 AM No comments:

Exeter-Milligan banked another W in the win column as they traveled to Nebraska City for a 6 p.m. game against Lourdes Central Catholic.  The final score was 45-22 The Timberwolves Football team will meet High Plains Community (#7) on Tuesday, November 6th in Milligan at 6 p.m..
Posted by Leesa Bartu at 9:24 PM No comments:

Just in case you can't make it to Nebraska City tonight - the football game will be broadcast on KTMX 104.9 (the York radio station) tonight starting at 6:00 p.m.
Posted by Leesa Bartu at 3:17 PM No comments: 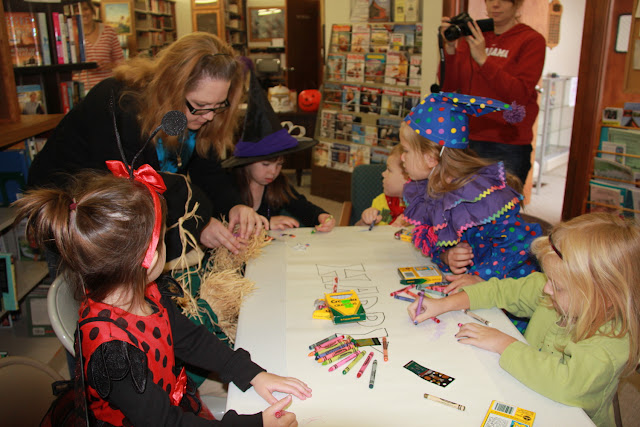 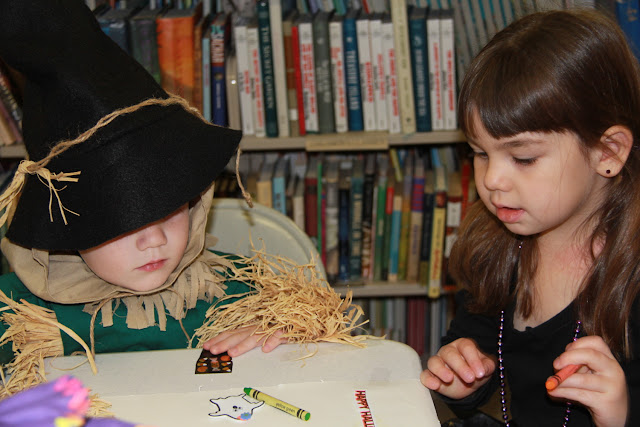 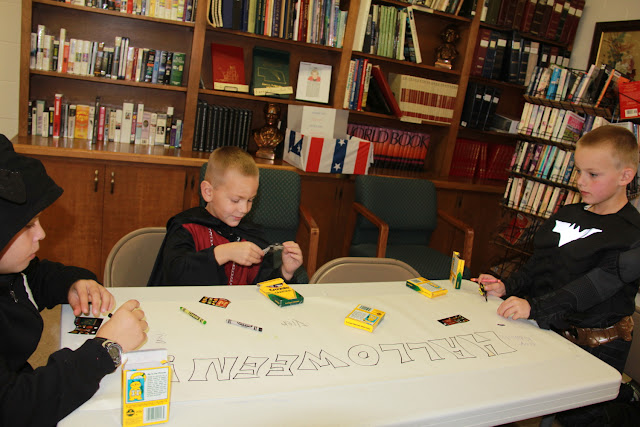 First through third color a Halloween poster.  They are from the left Ben Bartu, Tyler Due and Troy Kallhoff. 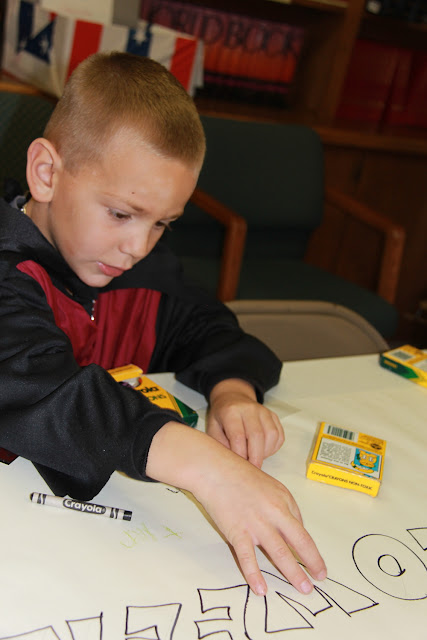 Tyler Due concentrates on getting a sticker in just the right spot of the Halloween poster.

Exeter Public Library held their Halloween Story Hour on Friday.  Preschool and Kindergarteners came in the morning and enjoyed stories along with a coloring craft.  First through third graders came in the afternoon for stories, coloring and a craft.  The Happy Halloween sign both groups colored and decorated is hanging in the entryway of the village office/library building.
Posted by Leesa Bartu at 7:30 AM No comments: