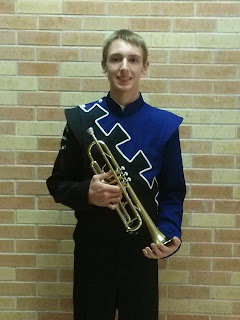 Trystan Brandt, a Junior at Exeter-Milligan High School, was selected to perform trumpet in the  Honor Band at the UNK Band and Choral Clinic on Jan. 25.  The students rehearsed all day on Monday and performed an evening concert.  The concert featured performances by the Festival Band, Honor Band, Women's Choir, Festival Choir, and Honor Choir.  The Honor Band was directed by Dr. Duane Bierman, professor of music and director of bands at UNK.  Participants were selected by recorded auditions and attended from Nebraska and Kansas
Posted by Leesa Bartu at 7:30 AM No comments: 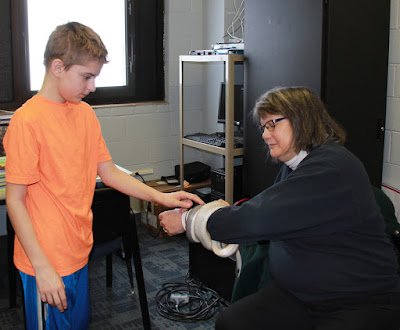 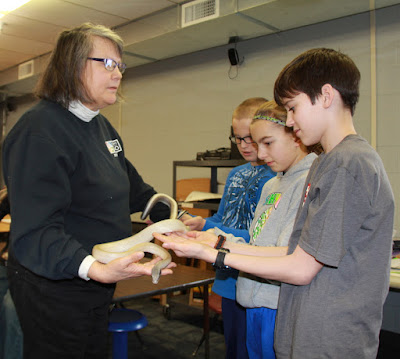 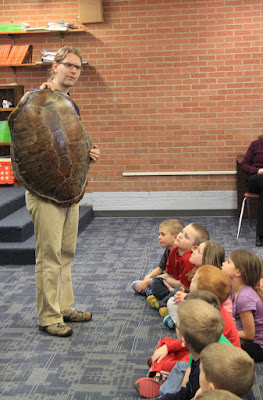 Exeter-Milligan kindergarten, first and second graders were impressed with the shell of a sea turtle that Peter brought with him from the Henry Doorly Zoo.

The seventh grade class were guided by a Zoo presenter, Peter, in dissecting an albatross bolus.  This is the inedible items of an albatross.  They form into a large cylinder and the albatross regurgitates it similar to what an owl does with a pellet.

The students found a variety of inedible items in their bolus including plastic packaging and squid beaks.

The seventh grade class also learned about a Cave Rat snake from a docent, Alice, who came along.  The seventh graders got to touch the different scales of the snake and then several of them got to feel the muscles in the snakes belly as it crawled along on their hands.

Later in the afternoon the kindergarten, first and second grade classes got to hear a presentation on animal superpowers by Peter.  Some of the superpowers the students were able to guess and try to imitate but they couldn’t seem to hold their breath for three hours like a sea turtle or sleep for 90 days like a black bear.  The students were impressed that the beaver could make it’s own lakes and the shark could regrow it’s teeth.

Delving into the issues facing the community of Exeter was the main focus for the Exeter Village Board on Monday, January 18th.

The workshop, not their regular monthly meeting, was opened by Chairman Alan Michl who then introduced Terry Meier And Jeff Ray, with JEO Consulting group, to moderate the meeting.

All of the members of the village board were present along with a few community members.  The purpose was to focus on strategic planning for the future of Exeter with a hope and finding potential funding resources.

Meier hoped to “Identify your needs and build a plan around it.”

The board and audience discussed each of the topics in detail especially focusing on needs and solutions.

Under the downtown revitalization some of the topics were new LED streetlights, sidewalk conditions, financing for storefront façade improvements, removal of dilapidated buildings including the tag factory and a potential site for the city office/library/technology center building.

There was also discussion on remodeling the former gun shop before turning the focus to the condition of the tag factory.  The board will be advertising for demolition bids soon which they estimate will cost between $130,000 and $300,000.

The village had looked into a recycling grant from the Department of Environmental Quality but were not able to meet the deadline. There was discussion on the possibility of still being able to recycle the materials of the tag factory.

The next topic the group discussed was the possibility of building a new city office/library/technology center.  The village has outgrown the current space, especially in the library which they would like to expand to offer more technology.

One possible site that was proposed was where the current tag factory sits and in the same conversation there was interest expressed in repurposing the current building into doctor’s offices.
The other possibility noted would be to expand the current building to the south, the building on the property the village owns will be torn down.

Clerk Becky Erdkamp explained the technology center could be to help service those in the community who are unemployed, “Jessica (librarian) recently had the department of labor come in and train her on how to do unemployment forms online.”

Residential development was recognized as the next topic for discussion.  There was a collective agreement that there is a lack of housing for both families and single residents.  It was acknowledged that a new residential subdivision is essential as many of the empty lots in town are owned by residents who  plan to use the lots for extra space around their homes including play space for their children or for their gardens.

Village Chair Michl indicated that the land near just north of the well houses is one possibility for expansion but the land would have to be purchased from the person who owns the farm ground.
Meier noted that the village is participating in the county-wide housing study which will help identify the housing needs in Exeter.  Using this information the JEO representatives hope to find available funds to fill these requests in town.

Michl and Exeter Volunteer Fire Chief John Mueller reported that approximately 12 homes in Exeter have been burned down in the last three years.  On Exeter Avenue (main street) one new home is under construction where two homes were burned down.

Along with this conversation  the group addressed the possibility of the nursing home reopening as an assisted living facility.

Public infrastructure and street improvements were the next point of interest that was examined.
Meier observed that the current street bonds retired in 2019, “You usually want to replace with debt with debt so that your property tax doesn’t drop off.  It’s hard to get (property tax) back on.”

The consensus was that East Boundary needs to be repaved as it is the truck route and has deteriorated.  Michl elaborated, “Probably more likely on the next street bond would be to repair and replace the streets.  Some need to be completely replaced in addition to the 20 blocks on the one and six-year plan.”

Along with streets, the water and sewer situation was discussed.  The last rate increase was in December 2012 and Mueller informed the board that the Rural Water Association will be preparing another rate study soon.

Meier asked Mueller about the condition of the sewer and water lines.  Mueller noted that the sewer line under the old railroad tracks have some issues.  The main sewer line that runs under part of the school has had some recent updates and they have had some issues with a lack of water shut off valves.

The lagoons are servicing the community unless it is a wet year, Mueller explained.  He estimates the water tower will need cleaning and repainting sometime in the next five years.

Several other topics including parks and recreation were discussed with it being recognized that most of the parks are in good condition. Several mentioned that additional camping pads at Gilbert’s Park would come in handy along with some new swings.

A short discussion was held about the current Exeter Chamber of Commerce revitalized as a community club.

After several hours of conversation the group was asked to choose two priorities with the majority choosing the downtown revitalization and removal of the tag factory as the top priority  with residential development as the second priority.

The city office/library/technology center was recognized as the third and street improvements were the fourth priority.

After establishing time frames for each of the priorities, Meier and Ray explained the process and JEO’s function.  They will compile the information gathered at the meeting and look at possible funding sources for the priorities creating a printed plan for the community to follow.  They expect to have this ready in a month.

The Exeter-Milligan Boys Basketball team will be playing McCool Junction tonight in York at the Auditorium at 7:15 p.m.  You can listen to the game live on KTMX 104.9

Exeter-Milligan has been part of the history of the CRC -- here's a great article about it:
Striv Sports
Posted by Leesa Bartu at 4:24 PM No comments: