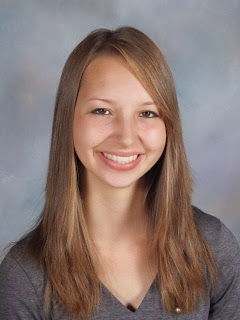 Each year, approximately 3000 of the best high school musicians in the state audition for the Nebraska All-State Band, Chorus, Jazz Band and Orchestra which are sponsored by the Nebraska Music Educators Association. Selection as a member of one of these groups is one of the highest musical honors attainable in Nebraska. Mr. Nathan LeFeber, Chair of Band Affairs for the Nebraska Music Educators Association, is pleased to announce that Jordyn Brandt, a flute player from Exeter-Milligan will be among the 155 students selected to be a part of the 2013 All-State Band. Guest conductor for the group will be David R. Holsinger – Lee University, Cleveland, Tennessee. He is the inaugural conductor of the Lee Wind Ensemble and teaches composition and conducting. The band will rehearse Thursday, November 21st through Saturday, November 23rd on the University of Nebraska-Lincoln campus, the host site of the 2013 NMEA Conference/Clinic. A final public concert will be held on Saturday, November 23rd at the Lied Center for the Performing Arts on the University of Nebraska-Lincoln campus.

Webelos scouts in Exeter Cub Scouts in Pack 218 had a presentation from Exeter-Milligan Superintendent Paul Sheffield during their meeting Monday, November 11th.  The scouts learned how important education is and they also learned about the history of schools and how things have changed over the last century.  Mr. Sheffield is pictured at the board with the Webelos clockwise around the table, Blake Meyer, Clint Oldehoeft, Braden Capek, Ben Bartu, Christopher Kelch and Holly Kelch.
Posted by Leesa Bartu at 7:30 AM No comments: 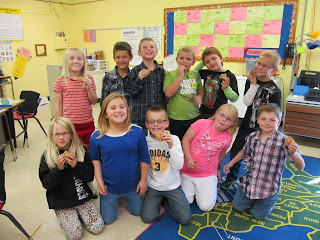 Math is Delicious
Second graders at Exeter-Milligan learned how fun math can be! The Saxon Math program, used at Exeter-Milligan, teaches a new mathematical concept every day and constantly reviews topics. This integrated, connected approach provides long-term mastery of skills and content. Most skills are taught with the use of manipulative items. This week, Grade 2 students learned how to read a recipe and identified measuring cups and spoons by size. Second graders agreed their applejack cookies were delicious!
Pictured are: Back L-R: Savannah Horne, Devin Harrison, Trenton Vossler, Andrew Vavra, Dravin Birkes, and Tyler Due
Front L-R: Savana Krupicka, Taylor Pribyl, Troy Kallhoff, Amarah Carr and Joshua Meyer 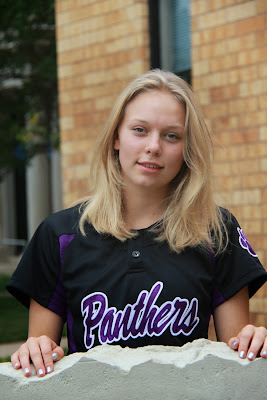 Dedenroth is loving her experience living in rural Cordova in the home of Doug and Dacel Thomsen and their daughter Maitlyn, also a junior at Exeter-Milligan.

So far Dedenroth has had a great time in America.  “I haven’t had time to miss my parents here.  I do miss my friends sometimes and I miss public transportation.”

Dedenroth just finished the ninth grade in Denmark and for her, tenth grade is the start of high school.  “This year doesn’t count for me but it’s worth it as it will help me in the future when I am looking for jobs.  Also, when I apply for high school I have a better chance coming in because of coming here and my English will improve.”

“I like the way school works over here but I am glad I am going through my education in Denmark because I gain more from that.  The three years of high school in Denmark compares to college over here.  I am thinking about coming here for college.”

At home in Denmark, Dedenroth has two younger brothers, and is used to doing a lot of family activities.  Life has been a little hectic at the Thomsen’s especially since both of the girls played softball on the Fillmore-Central/Exeter-Milligan team.  Dedenroth is also planning to play basketball and participate in track this year.

One thing Dedenroth has enjoyed is the food.  “I like American food and I really like peanut butter.  We have it in Denmark but we never have it at our home.”

Dedenroth has really appreciated the experience of coming to small town Nebraska.  “In the future I can go to the big cities but if I hadn’t gotten here as an exchange student I would have never tried it here.  I’m glad that I am here.”

The Thomsen family is glad to have Dedenroth here as well.  Dacel Thomsen noted, “It has been great! We are learning as much about her culture as she is learning about ours. She is just like a family member. She eats anything I make and never complains! She helps out around the house and helps in the kitchen. She and Maitlyn have become so close and Doug and I love to hear the two of them laughing together which they do a lot of. She has been a great sport to play softball which she has never done and she is now going to play basketball which she has done before.”

Dedenroth is really enjoying the Thomsen family.  “I love my host family.  I couldn’t have asked for better.”
They haven’t made any big travel plans but Dedenroth has gotten to experience a Husker game and enjoyed it.  She doesn’t know how much travelling she and her mom will do when her mom comes at the end of the school year.

Dedenroth hopes to find a future in language and business possibly back in the United State someday.
Posted by Leesa Bartu at 7:30 AM No comments:

Brandt's perform in the Honor Band at Concordia 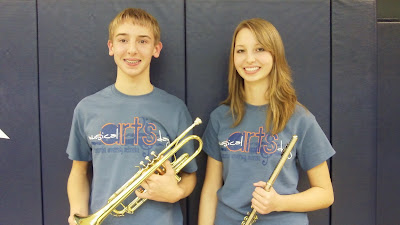 Jordyn and Trystan Brandt, children of Roger and Dianne Brandt of Exeter, were selected to perform in the Honor Band at Concordia University during their annual Musical Arts Day on Nov. 1. Jordyn, a Junior, performed flute, and Trystan, a Freshman, performed trumpet. They were chosen through a recorded audition. Participants attended from several states.
Posted by Leesa Bartu at 10:17 AM No comments: 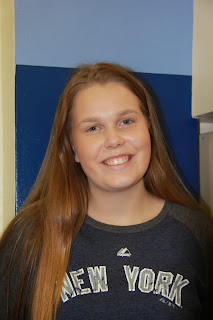 Ingrid Remmen has joined the family of Tom and Mary Lou Vossler this year on the foreign exchange student program.

Remmen, from Oslo, Norway is making a lot of adjustments.  She’s gone from a big town to a small town, from a large urban neighborhood to living out of town on a farm.

So far Remmen has enjoyed her experience in Nebraska.  She had applied for the program and quite a few of her friends had been accepted but it wasn’t until 10 days before she had to leave to come that she found out that she had a host family.

It was hard to leave her parents and older brother but she is looking forward to seeing them when they come to visit in April.  Between the Vossler’s and school activities at Exeter-Milligan Remmen hasn’t had a lot of time to miss her life back in Norway.

Remmen played volleyball for Exeter-Milligan and will also join the basketball team.  At home in Norway she plays handball outside of school.  “Sports aren’t in school so it’s a club team. We play year round.”

So far Remmen has had the opportunity to experience quite a bit of the area with the Vosslers.  They have traveled to Kansas City where Remmen got to try a funnel cake for the first time.  They have also taken in a Husker game, viewed the Sunken Gardens in Lincoln at their prime, seen a Salt Dogs game, eaten at Ribfest and explored the Omaha zoo.

The Vosslers have plans to take Remmen to South Dakota to see Mt Rushmore and other sights along with an upcoming ski trip where Remmen will feel very comfortable on the slopes.

Remmen also has plans to take a trip to Hawaii with the Foreign Exchange student group.  She hopes too travel with her parents when they come.

“I like shopping here, things are cheaper.  I like American food.  We ate the same type of foods but the combinations are different and the style of clothes is a bit different,” explained Remmen.

So far Remmen has enjoyed her classes at Exeter-Milligan.  For her, this year will count, but she will have one more year, year 13, when she returns.  “I miss the open campus.  Norway is a more like college.  We don’t have the same schedule every day and classes are harder there.  I miss going to the mall for lunch to eat.”

However, she is enjoying her history classes at Exeter-Milligan.  “When we have history we have about the same mostly.  We have more Norwegian history.”

Arriving at the Vossler’s home was like stepping on to a different planet for Remmen.  She has no pets at home and the Vossler’s have cattle, cats, a dog and sheep.  She’s also gotten to experience the farm life, riding in a combine and being around the equipment. So far, her comment about living at the Vossler’s,”I like it a lot they are real nice.  It’s a lot of fun.”

The Vossler’s have enjoyed the experience as well.  Mary Lou explained that “We have been learning so much about a different culture and having her in our home has been a blessing.  We have had a lot of laughter and learned a lot about her and her country.  I think we’ve gained an appreciation for differences.  We’ve been impressed with such a young female, only 17, who is so open to new experiences and willing to see the world by herself. I am not too sure many students around her would do that.”