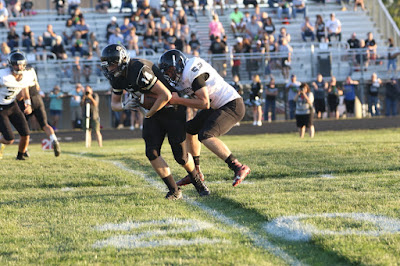 The Bobcats didn't take long to show their dominance on the field in Hebron.  Just over two minutes into the game Spencer Pribyl tossed a pass to Max Zeleny who hauled down the line to get it within a few yards of the end zone. Edwen Baptista took an option pass from Pribyl and he was in for six.  He hauled in two more points to bring the score to 8 - 0.
Thayer Central tried to get on the board after they took the kick off through the Bobcat defense into the end zone but the touch down was called back for a penalty.

After turning the ball over to Exeter-Milligan/Friend Pribyl tossed an option to Zeleny who dodged tacklers to just clip the end zone for another six points.  With 6:09 left in the first quarter the score was 14-0.

After three and out for the Titans, Manning took the kick off return all the way down the field into the end zone.  Pribyl tossed a pass to Baptista that was good for the two points.  With 4:29 left in the first quarter the score was 22-0.

At the start of the second quarter Thayer Central found the end zone and posted six but could not convert for two.

Manning again wove his way through defenders with the kick off return and hit pay dirt.  Unfortunately, an illegal block penalty brought the ball back to the 34 yard line.
It wasn't long before the Bobcats clawed their way down the field with a pass to Beethe who was brought down at the one yard line.  Manning took the ball in for six but the conversion was denied.
With 8:18 left in the half the score was 28-6.  Pribyl found the end zone on a run with 2:26 left in half bringing the score to 34-6. But the Bobcats weren't done yet.  Pribyl sent a pass to Beethe in the end zone with just 13 second left in the half.  Bossaller caught the two point conversion and the halftime score was 42-6.

The third quarter didn't slow down the Bobcats.  Manning ran in for another touchdown with Beethe catching the two point conversion in the end zone.  Score was now 50-6.

Zeleny had an interception but was hit hard and the ball broke loose.  Thayer Central recovered and on their first play the toss was intercepted by Beethe on the five yard line and run back to the 35.
The coaching staff subbed in reserves with three minutes left in the third quarter (the JV game scheduled with Thayer Central for Monday afternoon was canceleed).

After a tough fight the Titans scored with 10 minutes left in fourth quarter. The two point conversion toss was intercepted by Beethe.

The Bobcats have a bye week before meeting Osceola/High Plains on September 28th in Friend. 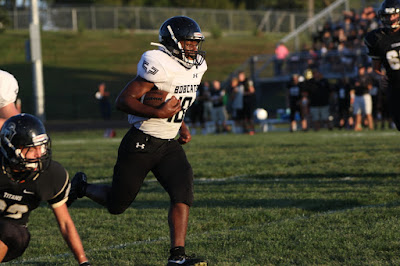 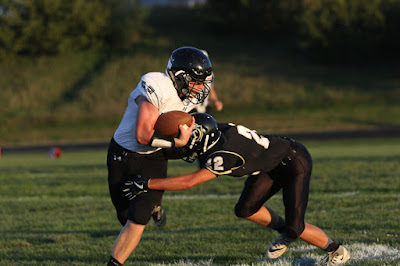 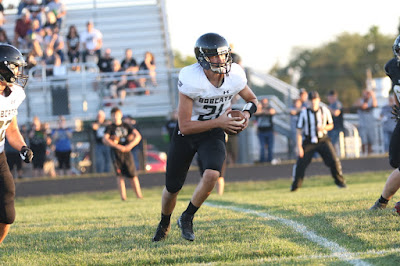 Spencer Pribyl gets ready for an option pass. 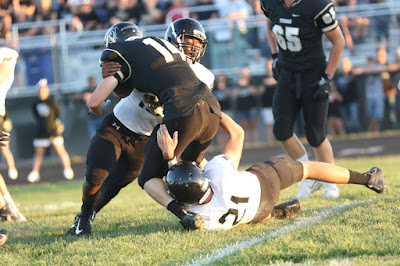 Spencer Pribyl and Edwen Baptista team up to take down a Thayer Central player. 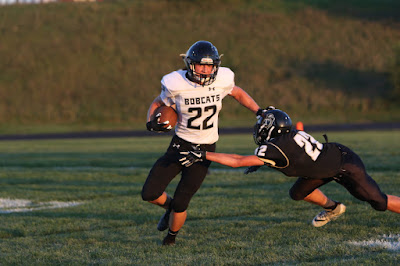 Mitchell Manning (above and below) flicks off defenders as he claws his way downfield. 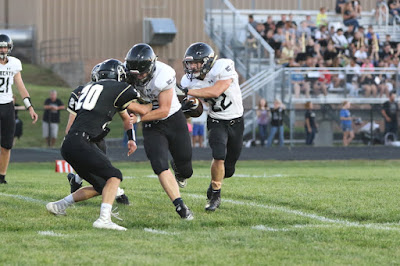 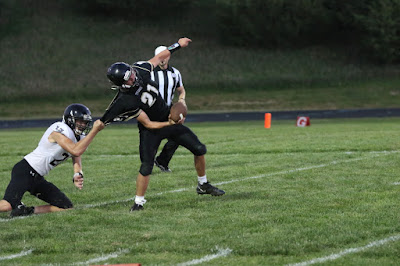 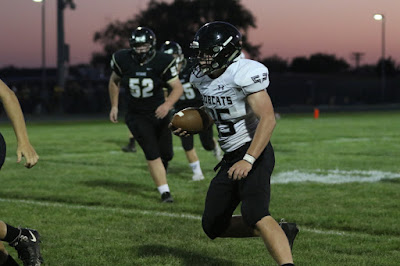 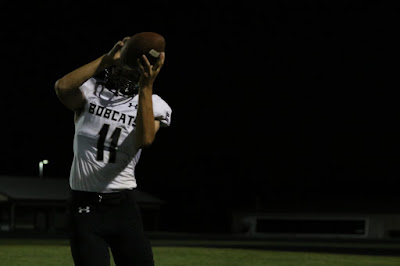 Jackson Beethe makes a catch in the end zone for the Bobcats. 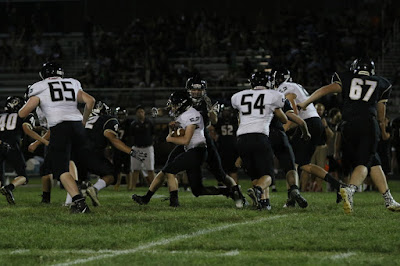 JB Drake carries the ball for the Bobcats. 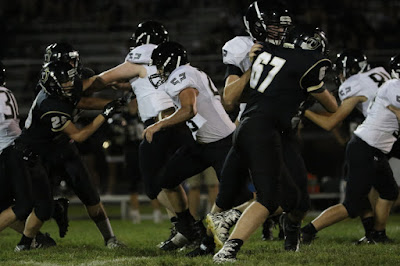 Dylan Bonds finds the whole and heads for the end zone. 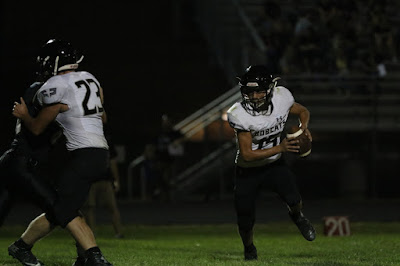 Christian Weber sees his opening and heads around for some yards. 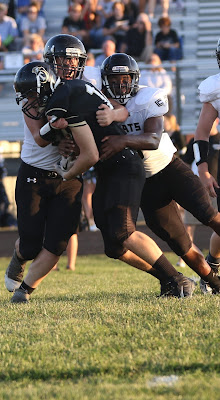 Edwen Baptista and Johnny Babula take down a Titan. 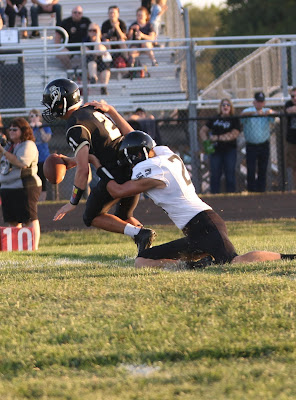 A second sack for Spencer Pribyl. 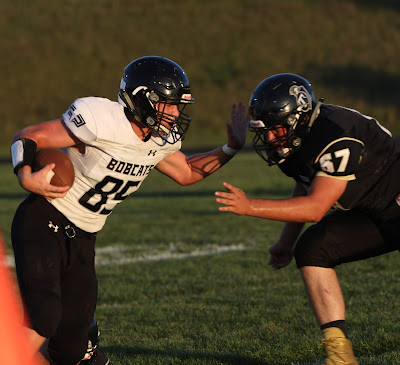 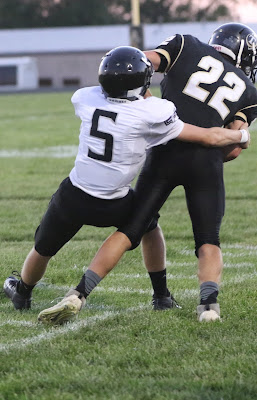 Trever Zelenka pulls down a Titan. 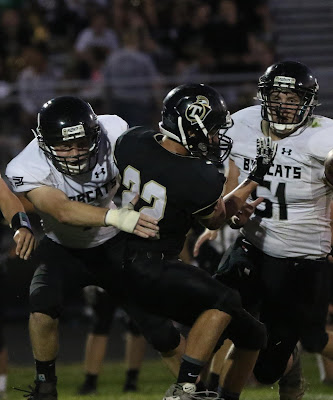 Colton Bossaller (left) and Johnn Babula take care of a Titan.
Posted by Leesa Bartu at 6:03 PM No comments:

There are lots of changes at the Exeter Public Library including a new librarian.  More on the changes soon! 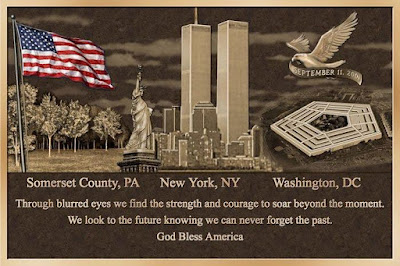 Posted by Leesa Bartu at 2:04 PM No comments: