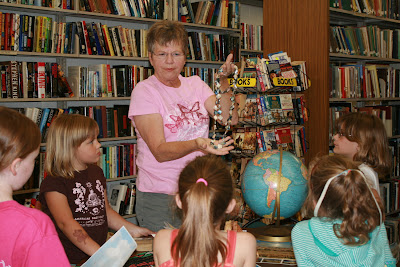 Sue DeJonge shows the participants at the Exeter Public Library Summer Reading Program the shell necklace she purchased in Israel on her trip. 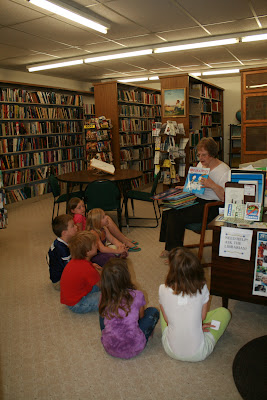 The Exeter Public Library Summer Reading Program participants enjoy listening to stories from around the world.
Exeter Public Library has begun their summer reading program this year with the theme of  "One World, Many Stories."
The library solicited coins and dolls from all over the world for the participants which are now on display.  Books were also chosen to reflect the theme.  Kindergarten and first graders enjoyed their first session reading stories and making their own travel suitcase.
During the month-long program the participants will be able to fill out travel vouchers for each book they read and turn them into the library for a prize drawing.
During the Monday session, second and third graders were able to hear a presentation from Exeter resident Sue DeJonge who traveled to Israel this year.  DeJonge shared her many experiences in the Holy Land, describing her ride on a camel and how the camel is suited to the desert.
DeJonge also shared with the participants about swimming in the Dead Sea and eating fish from the Sea of Galilee. She showed them pictures and some of the items that she purchased and collected on her trip.  The program continues throughout the month of June with more books to read and crafts to do.  Contact the Exeter Public Library to enroll or for more information.
SLIDESHOW ON SIDEBAR
Posted by Leesa Bartu at 8:46 AM No comments:

Cub Scouts from all over enjoyed a day at Wessels Living History Farm near York on Saturday at the Prairie Winds District "Down at the Farm" day camp.
Scouts from York, Lincoln, Fairbury, Exeter, and Milligan enjoyed earning four different beltloops, which are not rank specific, throughout the day .
In the morning the scouts worked on the archery beltloop, learning about safety when using a bow and arrow at a range set up on the Wessels campus.  The boys also earned their map and compass belt loop.
During the map and compass session taught by Jason Amick, Cubmaster of Pack 173 in York, the scouts learned about directions and how to read a map.  They drew a map of their own neighborhood complete with a key.
After enjoying their sack lunches in the barn, the scouts explored the farm some more and headed to afternoon sessions which included shooting at a BB gun range, playing soccer, learning about dogs and playing the games of the 1920's.
One part of the day was learning about dog safety from Wessels Living History Farm Director Dale Clark. Clark brought his dog, Sailor, to teach the scouts the correct way to approach and pet a dog.  He also encouraged them to ask the owner of a dog before petting a dog and explained the importance of not distracting working dogs.
Clark shared some games of the past with the scouts teaching them to play a game of "steal the bacon" and showing them the toys of the past and letting them have some playtime with the toys of the grandparents and great-grandparents such as old scooters, tin can stilts, and metal hoops and sticks.
The Prairie Winds District encompasses nine counties in Nebraska as part of the Cornhusker Council of the Boy Scouts of America. 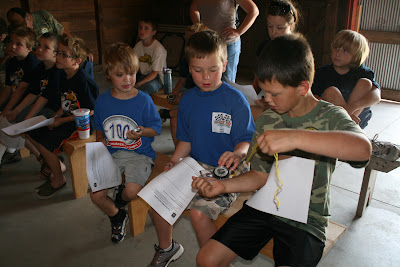 Exeter Cub Scouts in Pack 218 learned about how a compass works at the Down at the Farm Daycamp at Wessels Living History Farm near York.  From the left Mikey Bartu, Alec Schlueter and Jackson Beethe examine a compass. 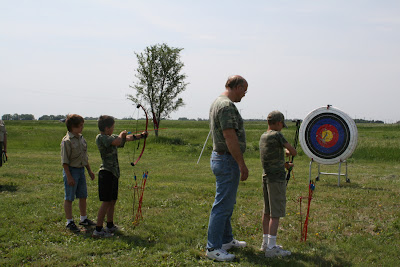 From the left Boy Scout Joey Bartu helps Jackson Beethe on the archery range while Dean Bartu helps Peytan Brandt.
Posted by Leesa Bartu at 11:45 AM No comments:

Derek Ryan Miller received his Doctor of Podiatric Medicine degree from Des Moines
University in the College of Podiatric Medicine and Surgery at the one-hundred and
eleventh Annual Commencement Ceremony.  It was held on Saturday, May 28, 2011.
Derek is the son of Bill and Shari Miller of Clay Center.  His grandparents are Roger
and Suzanne Johnson of Exeter and Wilma and the late Donald J. Miller of Geneva, NE.
Derek will be doing his residency in St. Louis, MO for the next three years.
Posted by Leesa Bartu at 10:50 AM No comments:

Exeter Post 218 American Legion recently honored five of its members for 65 years of membership with the American Legion. All of these men served in World War II in a variety of locations. The men honored are Richard Manning, Ted Larsen, Alva Smith, Del Jensen and Frank Tauriella (not pictured).
Posted by Leesa Bartu at 12:20 PM No comments: