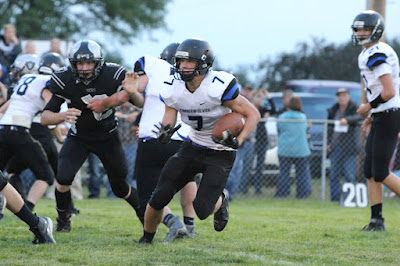 Trevor Luzum looks for a way around the Raiders during Friday nights loss against Lawrence-Nelson.


Exeter-Milligan traveled to Lawrence Nelson Friday facing the #6 ranked Raiders on their home turf. After losing to the Timberwolves the last two years (66-24 in 2014 and 34-28 in 2015) the Raiders were looking for some redemption.

L-N busted into the end zone within the first two minutes putting up 8 points at the 10:40 mark. The Timberwolves got close to making a set of first downs but fell short.  The Raiders were on the move again when Cameron White batted down a critical third down pass leaving the L-N team at 4th and 5.  The Raiders took a chance and coverted with 5:44 left in the first quarter bringing the score to 16-0.

L-N decided to do a on-site kick and despite the Timberwolves putting up a huge fight the Raiders were given the ball.  They moved the ball down quickly to the end zone on a run and slid into the end zone for another eight points with 2:09 left on the clock.  Raiders were at 24-0.

The Timberwolves brought the ball down to the eight yard line but just couldn't punch the ball in.  Raiders got possession on downs and with 7:10 left in the second quarter they moved the score up to 32-0.

The Timberwolves were making some progress but had a holding call which brought the ball back.  They punted to the Raiders and gave L-N more advantage with a personal foul called on the Timberwolves.  The Raiders found the end zone again with 3:10 left in the first half bringing the score to 40-0.

E-M got some help from the Raiders after Cameron White caught a Spencer Pribyl pass but there was a face mask call against the Raiders.  Trevor Luzum had a huge run that got him close to the end zone but a holding penalty brought the ball back to the 12 yard line.  Luzum carried it again to the 8 yard line but on fourth and eight the pass was blocked by the Raiders and time ran out on the half.

The Timberwolves found the end zone during the second half after Trevor Luzum found a gap to get downfield.  Colton Bossaller punched it in while Seth Maxson caught the 2 point conversion in the end zone.

The Raiders got in the end zone one more time bringing the final score 48-8.  The Timberwolves travel to Pawnee City Friday night. 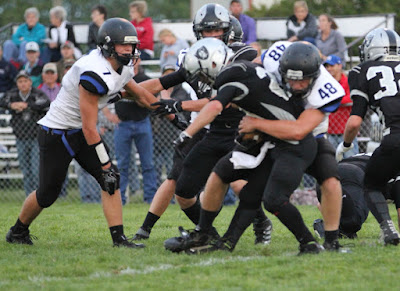 Cameron White #48 and Colton Bossaller #1 zero in on a Raider. 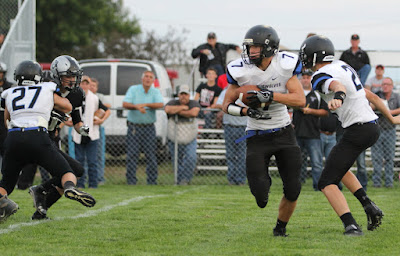 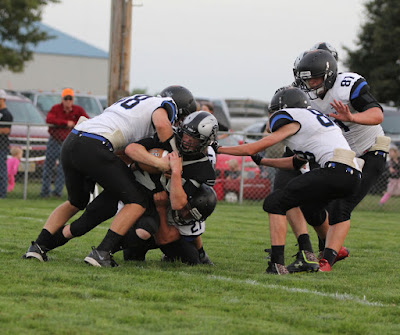 Exeter-Milligan’s Cameron White (#48) and Joey Bartu (#27) team up for another tackle against Lawrence-Nelson Friday night. 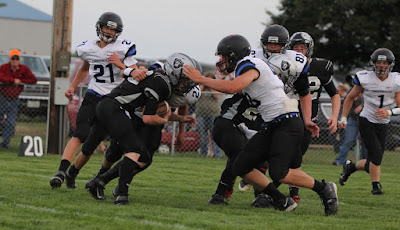 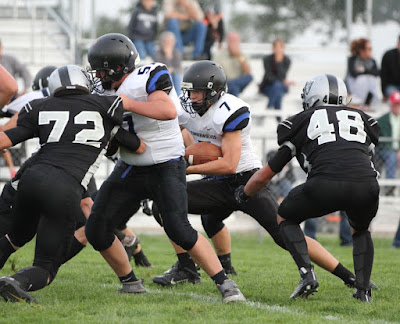 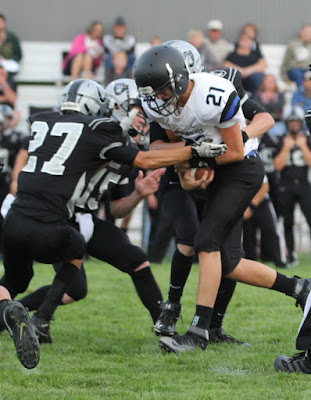 Above and Below Exeter-Milligan quarterback Spencer Pribyl keeps the ball for a gain of a few yards against a tough Lawrence-Nelson team. 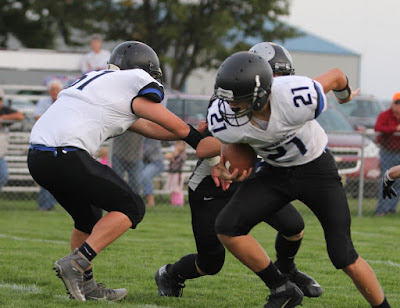 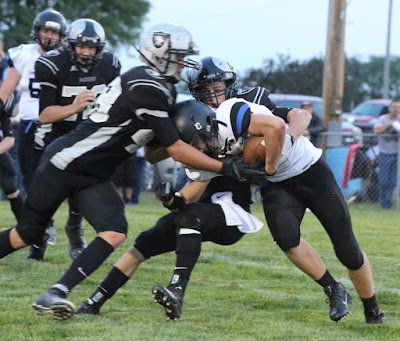 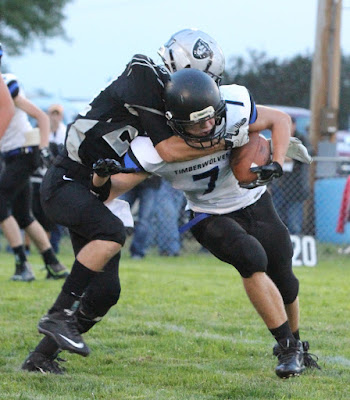 Exeter-Milligan’s Trevor Luzum had to fight for every yard he gained Friday night in Lawrence.