A public graveside committal of ashes for Rose Marie will be held on Monday, July 27, 2015 at 10:30 a.m. at the Cesky Bratri (North Cemetery), Milligan, Nebraska. Father Rand Langhorst will officiate the graveside.

Memorials are directed to the Milligan American Legion Auxiliary.
Posted by Leesa Bartu at 10:15 AM No comments:


The Nebraska Federation of Women's Club District IV Workshop was held in Seward on July 18, 2015. The meeting was called to order by Nancy Galaway, District IV President.  Registration showed 18 members representing 6 District Clubs. NFWC President, Jan Jones reported on International Convention held this year in Memphis, Tennessee with 267  members in attendance. This years service project was helping with a soup line. President Jones told of their tour of St. Jude Children's Hospital. They treat children 0-18 years of age all provided for by donations.  Projects for the upcoming year  were announced and suggestions of activities were discussed. International  awards were announced. Nancy Galaway of the Fairmont club took 2nd place in the short story division with a student from Seward winning 1st place in still life photography. NFCW earned 1st place in the Legislation and Publicity  reports. District Convention will be in Fairmont in October, NFWC Convention in April in Omaha and  next years workshop in Belvidere. Representing the Exeter Woman's Club was Judy Dinneen.
Posted by Leesa Bartu at 10:15 AM No comments: 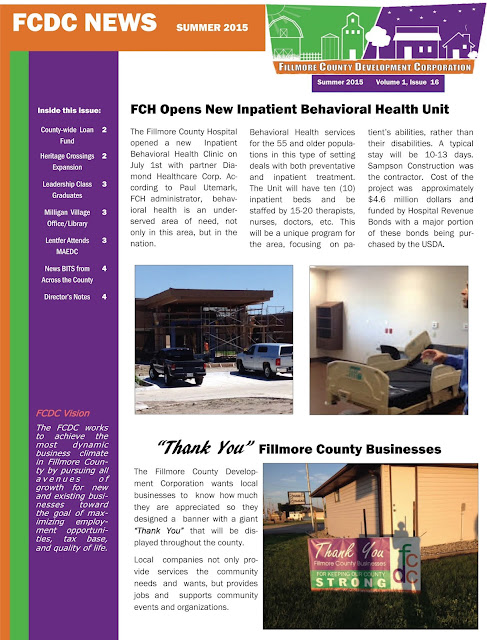 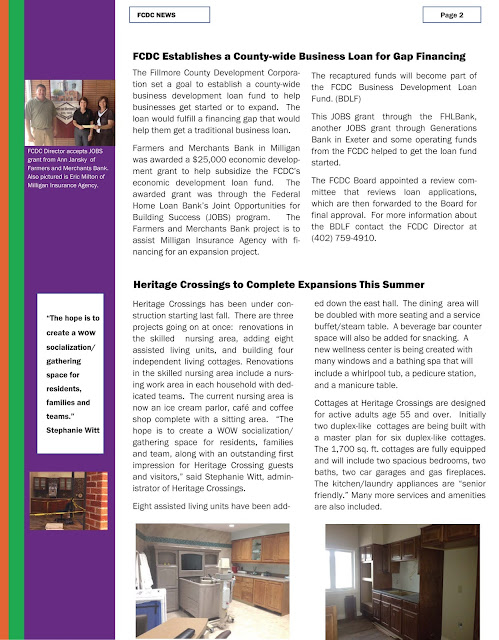 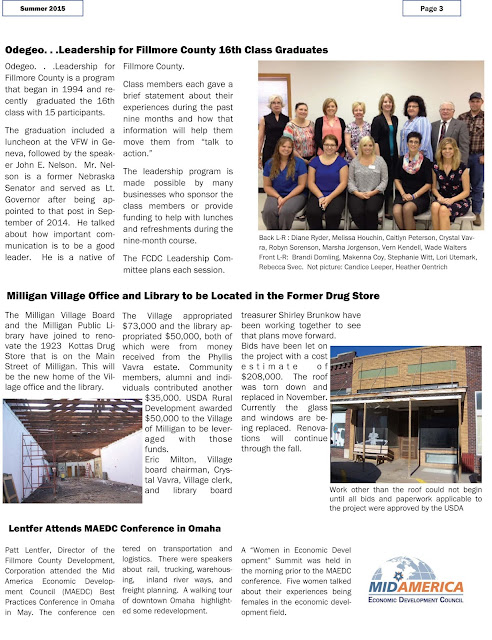 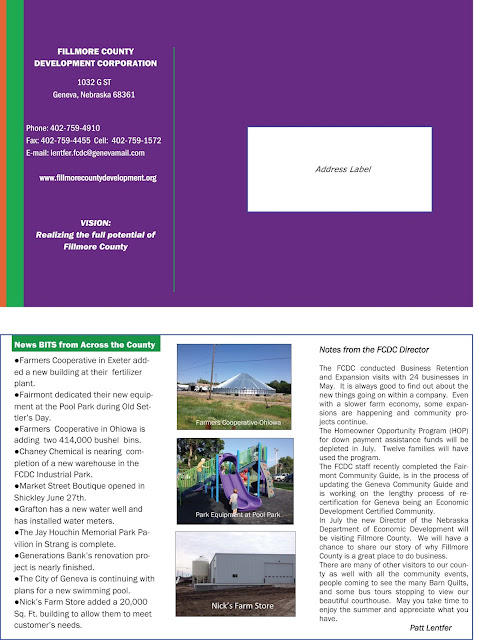 
By Leesa K. Bartu
The Exeter Village Board called their regularly scheduled meeting to order on Wednesday, July 8th without board member Mitch Schlegelmilch.

The board approved the minutes and invoices before Fillmore County Zoning Commissioner Jennifer Slezak  presented a conditional use permit and building permit that the zoning board had approved. The permit was for  Craig True who answered a few questions for board members in regard to the garage .  The board passed the building permit unanimously.

The next item agenda was Resolution 15-06 in which the board accepted the donation of the Tag Factory building,  Chairman Alan  Michl noted that the agreement is “basically stating that it is going to be torn down.”

Board member Kathy Erdkamp quoted the resolution that the board would ”demolish existing buildings.”

The Board moved and passed to approve the resolution to accept the tag factory as a donation.  Clerk Becky Erdkamp noted that there would be additional paperwork and legal documents before the building officially became the property of the village.

The board reviewed the Hazard Mitigation plan that FEMA requires them to complete every five years. Clerk Erdkamp reviewed a list of items and jobs to be completed as part of the emergency plan.

Village Marshal Mark McFarland gave a brief report indicating that he has opened the job position for an officer and the position will be open for several weeks.

Michl asked McFarland if he had made any progress on some of the residents with multiple junk cars.  Michl advised that the board to begin to think about towing some of the junk cars
McFarland’s response to the car owners in violation was, ”Show me some progress, we will work with you  I gave him a deadline of July and it’s not happening.  He’s had warnings and been contacted so he is well aware of the situation going on.”

Board member Justin Harre asked McFarland, “In the past, how many hours have officers dedicated to Exeter a week?”

McFarland and Michl agreed that there had been no agreement with set hours but with a new officer they are looking at having an officer who dedicates 30 hours a week in Exeter and then fills in the other 10 hours in Friend.  This would begin after an applicant completes training.

Commenting on the current applicants, McFarland noted, “I have a couple of locals and that is why I would want to do some interviews with everyone.”

Maintenance Supervisors report was given by Michl in the absence of John Mueller.  He reported a minor issue at the pump house because the wireless antenna was removed during roof replacement  This signaled a message to Michl but the equipment was fine. Mchal also reported that summer employee Jarrett Maxson took care of a problem at the lift station and has been keeping up with the list that Mueller left him.

Clerk Erdkamp reported that the people who own the care center building were in town.  She indicated that they were shocked at the condition of the building. They are paying the village to mow the facility and are up to date with their water bill.  She noted that they hired a realtor out of Lincoln to list the property.

“If the building were in better shape I think it would be a different story,” said Michl.  “The best shot would be a Senior Living facility down the road.  To be quite frank when the people left the rest home they left the rest home.  Elderly people in town aren’t going to live in anything that isn’t better than what they are living in now.  It’s too bad because when it was built in the 60s was one of the best in the state.”

Clerk Becky Erdamp  gave her report noting that keno receipts for June were $998.82 and May  sales tax was $9173.49. She also showed the board the new copier that the village will be leasing to replace the old one.

Superintendent Paul Sheffield reported that Rogge Contractors were awarded the bid for the JPA project. He reminded the board that they were the general contractors for St. Stephens parish hall in Exeter.

Posted by Leesa Bartu at 5:21 PM No comments:


The Exeter Public Library will be hosting a free-will donation book sale at the library from now until July 29th.  Quite a bit of the sale include children's nonfiction and reference.  Come and shop at the library!

Posted by Leesa Bartu at 1:20 PM No comments: