The board quickly moved through minutes and invoices before addressing the first agenda item, a fence between the ball park and Rich Horne’s property.

Horne requested the village replace the current wire cable strung along the property line with a fence that will keep cars from parking on his property.  He shared several photos of fences to give the village an idea of what is needed.

“Why don’t you get a price for something you would like to see out your back window,” asked board member Justin Harre.

The board asked Horne to get an estimate for fencing to replace the cable.

While discussing the fencing Harre noted that several ball field improvements need to be done before spring ball starts.  He explained that the application of a layer of field surface product has been scheduled and discussed tree trimming and rock on the driveway with Maintenance Supervisor John Mueller.

The board took no action on the police contract offered by the city of Friend.  They discussed several options and Chairman Alan Michl reported that in his discussion with the Friend council member there was no room for negotiation on price.

The board passed Resolution 21-02, the second of the liens for property clean up at 122 N. Burlington Avenue, and set the spring clean-up dumpster date for May 15.

Clerk Becky Erdkamp gave a nuisance property update noting that some of the equipment on the property at 211 N. Burlington Avenue has been removed from the front of the property but the equipment in the back of the house has not been moved.  The board will wait to hear back from the village attorney to see how to proceed.

The board approved the water meter reader proposal which includes a new water meter reader, software, training and a one year warranty.  Mueller will start replacing the meters that are not working. The new reader will read the old and new meters.

Mueller gave his report noting that the pool leaks need fixed once it warms up.  The fire hall remodel continues and he plans to have the floor done Wednesday.  Cabinets will be delivered in a week or two.

The board approved a letter of support for an application for an addition to a liquor license for the legion to have a beer garden between the village office and the legion.

The library received a $3000.00 grant from the Fillmore County Foundation. Librarian Lynette Trauger plans to use the funds along with $1500.00 from the Erma Adamson memorial funds for technology and requested $1500.00 from the village as well.

"The weather wasn't nice but we had a good day with a steady flow of people," according to Doris Hall one of the organizers behind Friday's American Red Cross Bloodmobile.

Construction continues on the Fillmore County Hospital. A good deal of the hospital has the exterior in place and they are working around the back side.  There is a crane in the back that lifts the poured wall piece in place and then a welder works to attach the piece to the steel beam structure.

In preparing for the ACT test in the spring and summer, sophomores and juniors are reviewing the grammar rules and looking at strategies to analyze the questions.  In the sophomore class, Sophia Gilliam, Jasmine Turrubiates, Hannah Busboom, Jozie Kanode, Morgan White, Olivea Swanson, Daysan Staskal, Gabe Jindra, Chase Vnoucek, and Marcus Krupicka take a break to pose with a “Hammer the Grammer” t-shirt.  Cade Kresak was not pictured. By improving their knowledge of the ACT type of grammar question, the sophomores hope to improve their ACT scores and chances to earn scholarships for college. 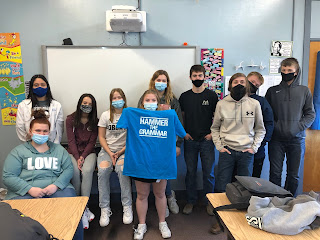 The junior class is learning test-taking skills and strategies through “On To College with John Baylor.”  They hope to use the strategies in the program to boost their scores for scholarships and the requirements of colleges.  They are transferring the learning of the grammar rules to their writing practice in English assignments.  The junior group picture includes Braden Capek, Rebecca Krupicka, Cameran Jansky, Madison Luzum, Emma Olsen, and Wesley Ronne (kneeling in front).   Several members of the class were not present at the time of the photograph.  They include Peyton Pribyl, Ben Bartu, Casey Underwood, Kiah Songster, Kole Svec, and Briana Capek. 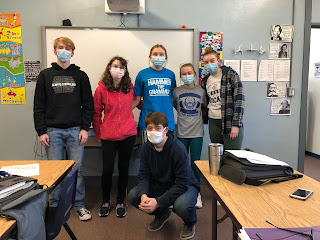 The speech class students are preparing to present their informative speeches.  The class for this semester includes Tyler Due, Taylor Pribyl, Malorie Staskal, Joshua Meyer, Trenton Vossler, and Dravin Birkes. 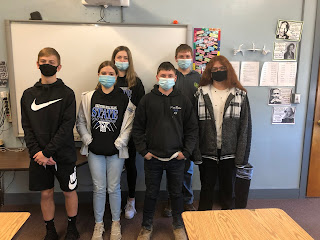 The Exeter-Milligan school board has spent the last year searching for answers to their declining enrollment.  The district explored a consolidation with Friend, where they already coop football and FFA together and share a science teacher.

At the height of the discussions with Friend close to 100 community members attended the July 2020 school board meeting urging the board to explore other options including the feasibility of consolidation with Fillmore Central.

Fisher began with a discussion on population and enrollment numbers.  The bottom line is that both numbers are decreasing in each community and the increase in average age reflects fewer school aged children.

Their predictions show that Exeter-Milligan would lose about 11 students over the next 10 years.  While Fillmore Central would lose some, approximately 54, it would not be as significant. Ten years down the road they estimate EM enrollment at 132 and FC at 520.

The study showed where a consolidation could save money, in curriculum, more specifically in teachers.

Maintaining two Kindergarten through fourth grade sites and combining at the middle school level would allow for the reduction of two staff members.  They explained that by moving to a single elementary site there would be the possibility for further reductions.

Fisher noted “Their(FC) elementary is full and they don’t have the ability to have a K-6 in a self-contained setting like you do.”

At the middle school and high school level there would be at least a loss of six teachers.  “Both districts have very well rounded course offerings right now. . .Exeter-Milligan students would have an advantage in having multiple opportunities to choose different courses throughout the day, “ explained Fisher.

Using the Exeter-Milligan average teacher salary, including benefits, the estimates of savings for teacher and staff with a merged district would be $1.24 million.

Before a consolidation could happen the two boards would have to “take a look at the staff and figure out what staff can do what and look at policy to decide who stays,” Fisher added.

At the February regular board meeting Exeter-Milligan Superintendent Paul Sheffield and Principal Laura Kroll shared a plan with the board to close the Milligan campus at the conclusion of the current school year.

Deitz and Fisher also discussed facilities maintenance and repair and replacement projections. Using numbers from each superintendent the estimates are that Exeter-Milligan looks to spend $1.386 million on both campuses and Fillmore Central estimates $672,000.00.  Both districts have an ADA accessible playground on their plan.

Deitz did note that the newest building between the two districts is right at 50 years old.

Transportation was briefly discussed but the report has no estimates as to what the cost or savings would be.

A combined valuation of the two districts would be in excess of 1.5 billion.  The estimated levy with a combined district would be .6381 while currently Fillmore Central patrons are at .6489 and Exeter-Milligan are at .6193.

At every point the study emphasized that having two campuses makes for higher costs.

The report gave several options to help the districts save money including merging and operating four buildings (one in Exeter, one in Fairmont and two in Geneva), merge and build a new elementary and middle school building, continue as separate districts but close the Milligan building, continue as separate districts but Fillmore Central moves to one K-12 building and finally the possibility of building a practice gym at the Fillmore Central high school site.

“Obviously if you want to save money you merge and you also provide opportunities for your students.  But there are so many other factors. . ..You have a double whammy – you have low enrollment and double sites. You are in a good financial position.”

“Outsiders can say it’s an easy decision but it’s not,” added Deitz.

The board did not have much response to the study. They did not discuss any plans to meet with the Fillmore Central school board.  The EM board is scheduled to meet on Wednesday, March 10 in Exeter.

Sheffield summed up the results of the study, “To achieve substantial savings will also include the loss of local jobs, people within the community, and a local school presence.  The patrons will need to decide which avenue is best for Exeter-Milligan.

Obituary for Margaret A. Stevens