Survey In the Mail

The Exeter-Milligan School Board and the Joint Powers Agreement Board have sent out a survey to all REGISTERED voters in the district about the proposed expansion project at Exeter-Milligan.  If you are not a REGISTERED voter you will not receive this survey.  If you receive one, please return it as soon as possible.
Posted by Leesa Bartu at 9:14 AM No comments: 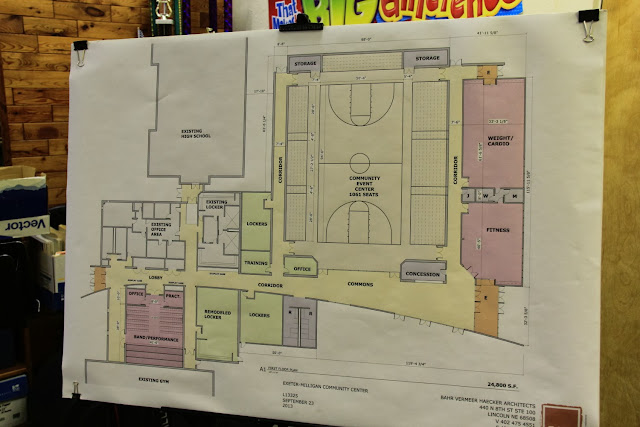 The Exeter-Milligan School Board met in Exeter on Wednesday, September 25th to discuss the JPA project, new facilities at the Exeter site.  This drawing is of the proposed architects plan for the $4.5 million project. 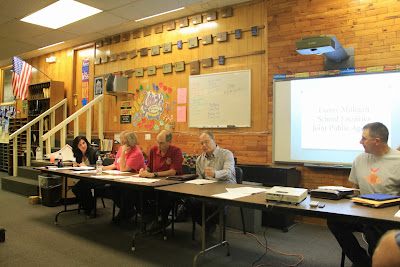 Part of the Exeter-Milligan School Board is pictured during the joint JPA meeting on Wednesday, September 25th.  From the left are President Sharon Kuska, Secretary Annette Gloystein, Exeter Village Board Chairman Alan Michl, Brent Moore and Tim Pribyl. 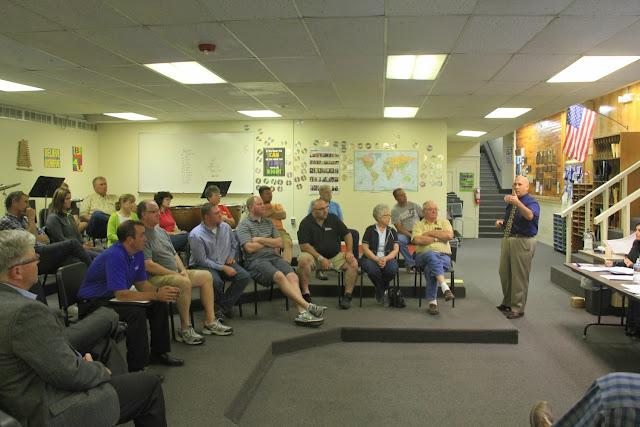 The Exeter-Milligan School Board and Exeter-Milligan Facilities Joint Public Agency(JPA) Board held a special meeting on Wednesday, September 25th at 8 p.m. in the band room.  The meeting was advertised as a discussion on the JPA project.

After School Board President Sharon Kuska opened the meeting, Superintendent Paul Sheffield presented a power point display looking at the different facts and figures behind the need the proposed new facility at Exeter-Milligan.

Sheffield explained that according to a facility study of the district “The Exeter site is 30,000 square feet under the recommended industry standard size for the student population.”

The study also determined “the specialized classrooms were undersized.”

After looking at the current facility and the facility study, the board developed some priority items, explained Sheffield.

The updates to the current facilities and a $4.5 million addition are where the school board is currently looking to make some changes.  Included would be a remodel of the “small gym” which would become a fine arts facility, new locker rooms added while remodeling the old locker rooms, a new  competition gym that would seat 1,000 comfortably, a multi-purpose room connected to a wellness center along with a training room, new concession area and new P E coaches office.

Sheffield initially approached the Exeter Village Board in September of 2012 inquiring about forming a JPA to build a wellness center and possibly a gym.  In forming a JPA they could then issue bonds, however one of the requirements of a JPA is the project must benefit the community.  Having a wellness center that is open to the public (for a yearly projected $200 fee) fits that bill.

In February 2013 Sheffield reported to the Exeter Village Board that he hoped to see the project come in around $3 million mark but the final costs on the new construction are looking to come in around the 4.5 million.

Sheffield introduced three guests to the group.  Jim Berg, with Bahr Vermeer Haecker Architects who has designed the project, Paul Grieger with D.A. Davidson & Co. who specialize in working on bond projects and Justin Kurtzer from Cheever Construction who helped with the cost estimates (if the project were to go to the construction phase the job would be up for bids).


Berg had several slides showing the current aerial view of the school and how the new addition would fit into the landscape.  He also explained how the remodel would work noting, “We can make the small gym a more acoustically tuned space without balls flying around.”

There were two big questions on the minds of patrons who were in attendance, “Are we going to have the student population to need this size of a project?” and “How is this project going to be paid for?”

Sheffield noted that one of the challenges for Exeter and Milligan in maintaining and increasing population is the lack of affordable and decent housing.  Several in the audience who have grown children commented that their kids are trying to come back to Exeter.  Alan Emshoff, President of Generations Bank in Exeter noted, “I have three daughters that may want to come back and this may attract them.  We can’t be short sighted we need to look forward.”

Part of the audience concern encompassed the fact that there are just 39 students currently attending the Milligan campus in third through sixth grade. Many in the audience agreed that the dwindling numbers was cause for serious concern.

Local land owner and Exeter resident Paul Jensen commented, “I would be all for the project if we had the numbers to support it.”

Financing the project was the other overriding concern of the audience. Again Sheffield took the floor and used a power point presentation to demonstrate how the project would be funded.  “The new construction would be under a 15 year bond with a payment of $385,000 per year.  The levy the first year would be .10 because we would be collecting a year behind.”

According to Sheffield, the projected numbers show that the amount collected for the levy would go up .06 cents.  “On a 160 acres of irrigated farm ground that would be $451.20 more property tax per year as it is valuated now or $2.82 per acre.  Dryland would be $1.50 more per acre” explained Sheffield, “On a $100,000 house in town, the property tax would only increase $60 per year or $5 per month.”

The projected costs of the remodeling would be paid for out of funds that the district has already collected and held in reserve, “We’ve tried to put money away so we can be proactive,” explained Sheffield.

As far as funding from the State, Sheffield noted that in Fillmore County it is non-existent. “We do not get any state aid because we are land rich in the states eyes.”

Several in the audience expressed concern over the current high land valuations and what will happen if those valuations drop.  Sheffield understood their concern and noted that “When land values tank we have cash reserves.  When veteran teachers retire, we save there as well.”

Fillmore County Supervisor Bob Mueller spoke up on the issue, “It doesn’t really make a difference what your valuations are.  You are going to pay the same amount of taxes no matter what the valuations of land.”

Village Board Chairman and JPA Board Member Alan Michl explained that “We can still do this project within the limits of the levy.  The school district could tax up to $1.35 and we are well below this.”

School Board Member Jim Zeleny was blunt about the reason for the meeting, “We want public opinion and that’s what the board will base their vote on.”

School Board member Brent Moore spoke up about the meeting, “We’ve had a lot of good input here.  The dollars should have been spent previously but we made a conscience decision not to.  This project is set up to allow expansion to one site.  We need to do this now or decide how you are going to disband.  Time is a factor when you are talking about construction.”

The school board voted to delay on the project and appointed a committee to work with the administration to develop materials appropriate materials to take a poll among constituents and report back to the school board as soon as possible.

During their meeting September 23 the school board also voted to begin improvements on the field events for the track in Exeter.  They will be redoing the pole vault, long jump, high jump, discus area and also work to control drainage on the field.  Redoing the entire track has not been approved.