Village of Exeter Do Not Flush!!! 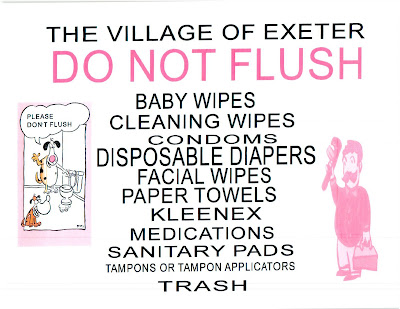 Posted by Leesa Bartu at 1:41 PM No comments:

Nearly 50 patrons attended the Exeter-Milligan school board meeting on Tuesday in Exeter.
Chairman Adam Erdkamp opened the meeting welcoming the visitors and noted that there would be time for the visitors to speak at the end of the meeting.

The board quickly approved the consensus agenda and reviewed the policy on communicable diseases.  Superintendent Paul Sheffield confirmed the current policy, “If the school would close; it’s coming down from the health department.. .We talked to teachers about it today and if we have to close for 14 days we will make a plan to deliver content digitally.”

The next item on the agenda was the curriculum report which was a review of the recent external visit.  Board member Eric Milton commented, “It sounds like they were fairly impressed with us .”
Board member Tim Pribyl concurred with Milton’s comment noting “they were especially impressed with our technology of one to one laptops and ipads.”

The board moved on to old business after noting they would be moving the consolidation topic to the end of the meeting.  The board approved the principal contract and looked at a report from thebuilding and grounds committee.

The CIPA filter was a discussion point for the board.  Sheffield informed the board that the essential internet filter is about eight years old.  “We are going to have to replace it and will try to use E-rate funds to help defray part of the cost.   You will see the universal service fund on your phone bill.  We will apply for use of those funds.  It usually costs $6,000 so we will hopefully get it for half price.”
The board approved this project.

The board approved five days of unpaid leave for Mary Kay Pribyl.

Erdkamp gave a timeline of the current topic of cooping all sports and/or consolidation with Friend Public School.  He explained that the board looked at doing a curriculum study, “We wanted to know how we were doing and what some opportunities were for our kids.  We invited Friend to participate with a separate report for us and Friend.”

The report was completed at the end of December and presented to the board.  The curriculum committee which included Erdkamp, Milton and Kendra Oldehoeft along with Exeter-Milligan administrators met with professors from Wayne State who presented the report in January.

The board discussed the committee meeting in their February 12 board meeting and also at a work session they held.  The committee met with the corresponding Friend curriculum committee.

Erdkamp explained, “These meetings (with the exception of the committee meetings) have been advertised.  We have not been trying to go behind closed doors.  We want to be open about this conversation.  We are glad everyone is here because we want to know your opinions.”

He added that in the committee they “talked about the football and  ag coop and everyone seemed to be positive about how that is going.”

Milton commented on the curriculum report, “It’s about providing the kids a better education which is what this is all about. The professors said more kids is better as they teach each other and challenge each other in the classroom and sports.”

Erdkamp gave patrons a glimpse at what a possible layout might look like: elementary in Exeter with junior high and high school in Friend and preschool in both locations.  For sports he speculated that football would be played in Milligan with volleyball in Exeter and basketball in Friend.

Sheffield added that he had gone to the Exeter-Milligan coaches asking them what they needed, if they would be interested in cooping sports and received a very positive response.

Audience member and parent Chris Grummons asked “what would be the advantage of consolidation? What programs would it open up?”

Sheffield offered to answer the question noting, “Friend has an active industrial arts program with electric cars, Exeter-Milligan has a plasma cutter.  We share an ag teacher now but we can offer them a business teacher.  Athletically there would be more numbers to be more challenged from within.  An activity we could add would be wrestling.”

Exeter-Milligan principal Laura Kroll added, “The ability for the kids for problem solving when you have just one, two or three in a class versus having more will help challenge the kids on the court or the classroom.”

Oldehoeft also noted that “this will provide for kids on all on the spectrum.  More kids in each grade means more personalized attention to the level that child is at.”

Erdkamp emphasized that they would continue to have two classes of each elementary if the consolidation happens.

He also expounded on the negatives, “We would have a loss of identity of Exeter-Milligan, no student presence in Milligan, more competition for playing time or band activities which can be an advantage for kids or a disadvantage.  The more competition the better, they are going to have competition in life.”

Parent Kyle Svec made several points, first about developing a culture which takes time and second, “the economic factor. Going from four games to two in Milligan, there was a cost but you can’t put a dollar figure on it.  Also having kids visible at recess adds vibrancy to a community.”

Erdkamp responded that the only “other possibility would be with Fillmore Central and I don’t see it happening.”

He talked about the numbers noting that in 2002-2003 when Exeter and Milligan consolidated there were 321 kids and now the district has an enrollment of 149.

The audience also asked about the effect of consolidation on the staff.

Erdkamp responded, “We would not be in favor of firing staff.  Over time attrition would take care of the numbers. If a teacher retired they would not be replaced.”

The audience asked about class placement and conference. Sheffield responded, “We would be C-2 right away or could be D-1.  In CRC most schools would accept us but it would have to go to a vote.  Pioneer Conference would accept us.”

Exeter Village Board Chairman Alan Michl commented, “I just want to commend the board for being proactive.  It’s going to come down to the point that they are going to legislate what we do.”

There was also a discussion on the difference between a unified district and consolidation.  Sheffield explained, “There is a seven year agreement with unification.  It’s like a trial marriage.  If you unify you still have EM and Friend.  Unified keeps each district intact.”

Milton commented, “I don’t think dissolving a district is a good idea at any time.”

The board was asked about timetables and no specifics were offered.

Exeter-Milligan assistant girls basketball coach Sara Pella commented, “From a coaching standpoint and being a JV coach we have only been able to take five or six to JV tournaments and one or two of those girls are starting on varsity. It’s difficult.  We haven’t gotten the experience because we haven’t had a JV program.  We need to build the program from an elementary program and we didn’t have one last year. Build the program all the way through and we would be able to do that with more girls.”

The discussion moved to a financial perspective talking about levies.  The board was asked about the higher levy in Friend and the current bond Friend has for their school addition.

Sheffield reassured patrons, “When you consolidate you do not take on debt.”

Erdkamp noted that the next step is to have a committee meeting with the Friend committee members.

Sheffield gave a brief update on several bills in the legislature which would affect school finances and the board set the next meeting for April 8 in Milligan. 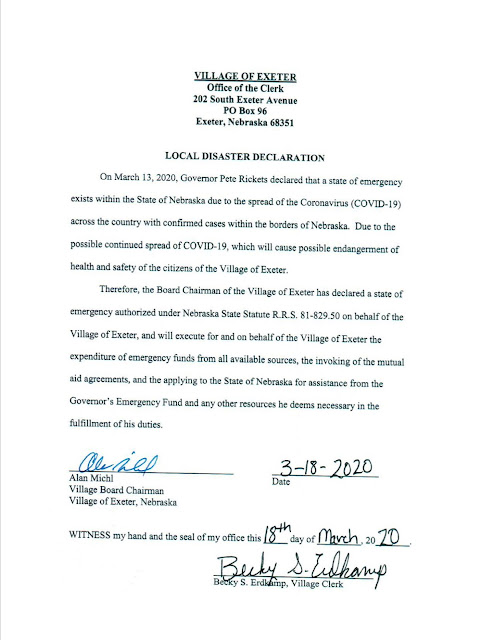 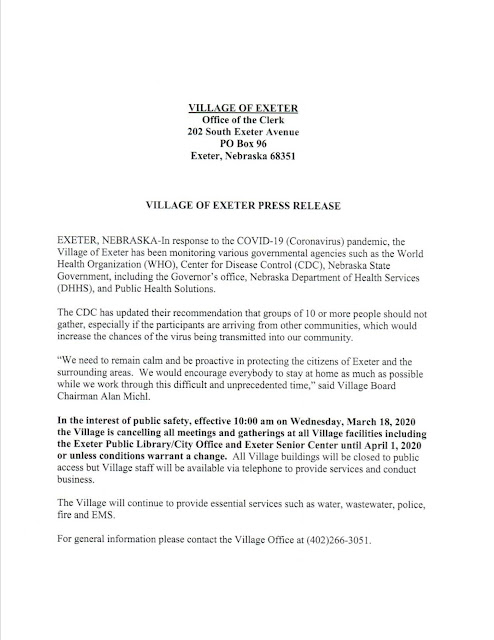 Posted by Leesa Bartu at 6:41 PM No comments: The "Fabulous Frogs" reading group has been "jumping" through Reading Mastery, Signatures 1 this year!  They continue to learn new words and are becoming amazingly fluent readers.  They look forward to starting a brand new book in the near future!  Students on the left are Kyson Mitchell-Holtzen, Saydee Kassik, and Kaidence Koehler.  Students on the right are Braxton Harre, Kora Havel, Archer Engert, and Landri Johnson

Seventh grade students are reading A Long Walk To Water by Linda Sue Park.  The characters in the novel live in the Sudan desert of Africa.  With the study of the literature, we discussed the types of food the character eats in Africa.  The student sampled mango, rice, cous cous, and tamarind.  Students are writing an essay on the importance of water.  Standing in back are Joleen Vossler, Lily Jeffries, Carter Milton, Mikey Bartu, Jayden Capek, and Aidan Vavra.  Sitting in front are Kierra Papik and Emma Meyer.  Liberty Johnson was absent. 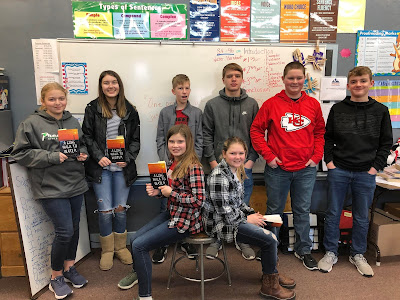 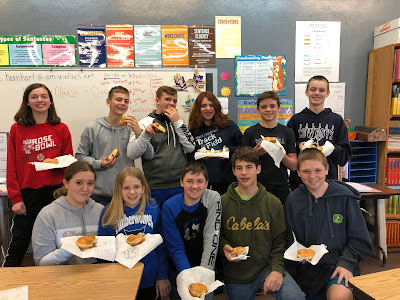 Eighth grade students are reading the play “The Diary of Anne Frank”  by Frances Goodrich and Albert Hackett.   As they study the events of history including the Holocaust, we tasted some paczki rolls as traditional breads in the Jewish communities.  Students are writing about their heroes and relating their characteristics to characters in the play. Standing in back are Malorie Staskal, Tyler Due, Andrew Vavra, Dravin Birkes, Draven Payne, and Troy Kallhoff.  Kneeling in front are Taylor Pribyl, Savana Krupicka, Joshua Meyer, Devin Harrison, and Trenton Vossler.