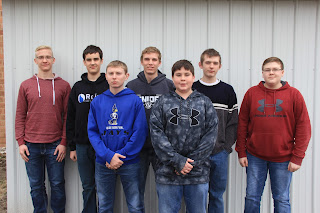 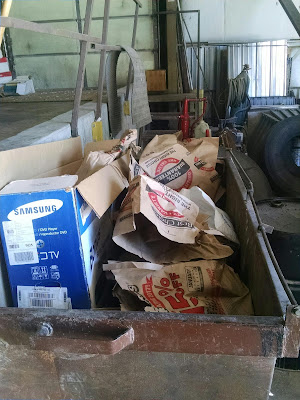 This picture shows so of the items found in the recycling trailer that are not allowed!  Any cardboard (even if it is corrugated) that is slick on the outside is no longer allowed in the recycling trailer.  This also includes paperboard pop containers.  As you can see when you put your newspapers in the trailer they should not be in paper bags as those are not allowed either.  Please read the items that are allowed to be recycled in the sidebar. 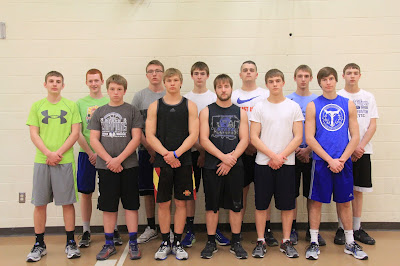 Track season opens with the Doane Indoor Invitational on Thursday, March 17
Posted by Leesa Bartu at 7:30 AM No comments: 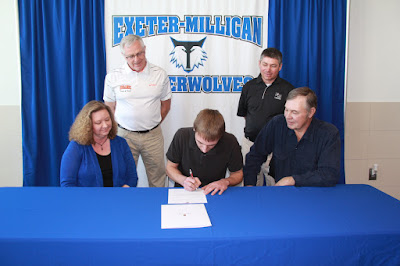 Trystan Brandt likes to get a jump on things, and by jump we mean long jump.

On Wednesday, March 08, 2017 Brandt signed a letter of intent to join the track and field team at Doane University.

Coach Fye welcomed him to the team, “He will fit right in with the other kids from Exeter.”

He noted the success that Brandt had at the state track meet last year and the interaction he has shared with Brandt at some of the Doane camps, “When you do things like that (medal at state) you are doing the right thing.  Trystan is a good character kid which is what we are looking for on our team.”
Fye plans to have Brandt focus on his jumping, “He might be doing a little bit of hurdles.  We bring kids in and they have their specialty events.  With 150 kids on the team we don’t have to spread them as thin as they do in high school.”

At Exeter-Milligan Brandt appreciated that he “was able to try out a bunch of different events to see what I was good at.”

Exeter-Milligan head track coach Brian Murphy sees successful for Brandt at Doane, “He will work hard, he is a coachable athlete and has natural abilities running and jumping.”

Brandt is looking forward to the experience, “It will be a challenge going from a small school to a lot of people and getting used to a strict training regimen.”

Murphy is confident in Brandt’s success on the playing field and in the classroom.  “Trystan has taken advantage of what is offered at Exeter-Milligan. He has been successful in the classroom. Also, his success has carried over into a wide variety of extra-curricular activities he has been involved in here.”

Brandt plans to major in computer science and environmental science while at Doane. 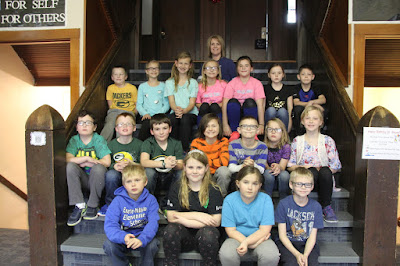 Above– The Exeter-Milligan third graders gathered for a photo together.  On the very top is the third grade teacher Mrs. Laura Steuben.  The top row of students from the left are Jase Luzum, Selah Petersen, Kiley Oldehoeft, Kaydence Haase, Alexis Saatmann, Alivia Luzum and Trevin Ronne.  Middle row of students from the left are Ronnie Babula, Brett Kallhoff, Jonah Geiger, Carver Kanode, Logan Krupicka, Aiyden Franssen, and Alexis Bendig.  Front row from the left are Avery Nichols, Katherine Hale, Ariana Smart and Tucker Svec.
Below – Selah Petersen readies her cards to play a game of bump to learn more about idioms.  She didn’t want to be a bull in a china shop. 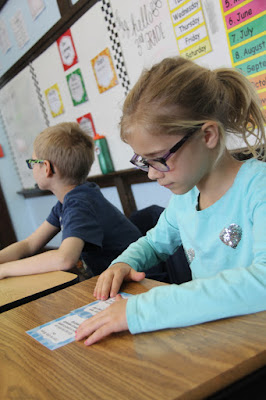 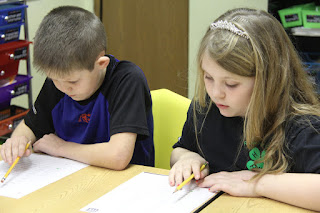 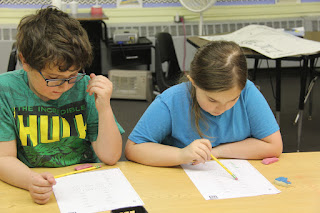 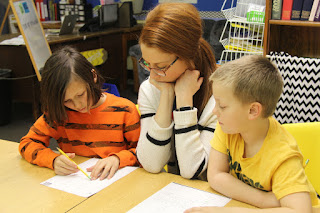 Part of the third graders work on language with Miss Roemmich in her classroom.  From the left are Carver Kanode, Roemmich and Jase Luzum.
Posted by Leesa Bartu at 7:30 AM No comments: