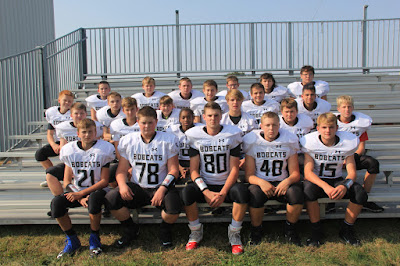 Game 1 @ Friend vs. High Plains-  Win 20-6  EMF got off to a rough beginning to the game as on the first offensive series our starting 1 back, Mikey Bartu, got injured and lost for the rest of the season.  EMF did manage to pull out the win in an ugly game in which we had to move players around to different positions.

Game 2 @ Friend vs. Diller Odell- Win 52-14  EMF came out strong from the start dominating in all phases of the game.

Game 3 @ Milligan vs Thayer Central Loss 0-20 Thayer Central was a very tough foe.  They had very large and athletic kids.  We struggled to move the ball as consistently as we would like and made mistakes when we had opportunities to put points on the board.

Game 4 @ Meridian- Win 62-12 Meridian presented a unique challenge as we had to play defense against a 6 man offense which can be confusing if you are not used to playing 6 man football.  Meridian scored quickly on their first possession, then recovered the onside kick and scored again!  EMF found themselves in a hole but recovered, holding Meridian to 0 points after that and scoring 62 unanswered points.

Game 5 @ Shelby-Loss 18-36  EMF was in a dogfight from the start keeping the game close in the first half.  In the second half we made too many mistakes and had some untimely penalties to stall drives.

Game 6 @ Heartland- Win 24-18  EMF played a tough game overcoming the fact that we were missing some players for various reasons and Jacob Klooz was playing with a lot of pain and only able to use one arm.  We had kids step up and help us do enough to secure the win.

Coach Cerveny and Hitchcock are very proud of the guys.  They had to overcome a lot of obstacles this year including injuries and Covid.  When we lost Mikey to injury we lost a very strong team leader.  This was unfortunate but did give Jacob Klooz and Aiden Vavra a chance to step up and develop as team leaders and they did step up in a big way!  We look forward to  next year as we have a strong core of talented 7th graders who are capable of a strong season next year.

Exeter-Milligan Lady Timberwolves sealed their DISTRICT CHAMPIONSHIP tonight at Tri-County soundly defeating Pawnee City in three sets.  The Timberwolves are seeded #1 in the State Championship that will begin next Thursday in Grand Island. Congrats! 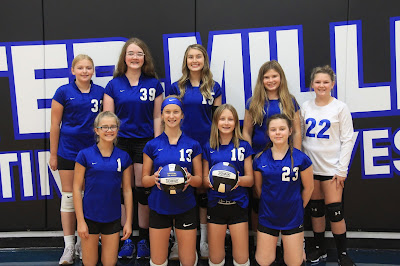 The E-M Junior High Volleyball team ended their season on October 3 with a record of 4-7.  The girls had wins over Friend and Sterling along with 2 wins over McCool Junction. They had losses to BDS, Dorchester (2 times), Meridian (2 times), Centennial and Sutton.  The girls’ season was cut short due to COVID related issues.  Leading the team in serving was Kaydence Haase (86%, 47 aces), Emma Meyer (85%, 23 aces), and Alivia Luzum (84%, 24 aces).