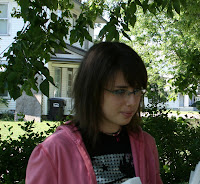 Several Exeter-Milligan students have been honored recently for their musical talents.

Mariah Ruhl, a junior, was chosen to be a member of Nebraska's All-State Chorus. She will attend a clinic sponsored by the Nebraska Music Educators Assocation as well as a concert. She will sing Alto 1. Rehersals will be held on Wednesday, Nov. 18 -20 at UNL and the concert, open to the public will be held on the 20th at the Leid Center.
Mariah Ruhl
Exeter-Milligan Band students were also honored.

The students participated in a all-day workshop and performed a free 4:00 p.m. concert in Heckman Auditorium, Communications Center.

The students represented 42 Nebraska schools and were selected by audition for the Festival Band and Honor Band. Guest conductor of the Festival Band this year is Linda Donohue, a retired teacher with 40 years of teaching experience.

The Honor Band will perform under the direction of guest conductor, Dr. Larry R. Bloecher, professor of music, director of the School of Music at Troy University.

Students from Exeter-Milligan participating in the Festival Band are:

Tuba - Jalen Mason
Posted by Leesa Bartu at 9:06 AM No comments:

The Exeter-Milligan Timberwolf football team made a long trip to Emerson, but it was worth the drive.

The Timberwolves defeated the Emerson-Hubbard team and will move to the next round of playoffs on Tuesday against Howells. The game will be played in Milligan.

The Exeter-Milligan volleyball team lost Tuesday night in playoff action in York against Meridian but with a record of 24-5 are keeping their hopes alive for a wild card spot in state playoffs.
Posted by Leesa Bartu at 4:59 PM No comments:

Walter Donald Smith, son of Wayne and Mae (Hardinger) Smith was born on June 8th, 1921 at Westfield, PA. He Pasted on Saturday October 31st, 2009 at the Fillmore County Hospital in Geneva, NE at the age of 88.

As a young boy he attended a rural school near North East, PA, and graduated from North East High School with the class of 1939.

Following graduation he was a foreman for Curtis Aviation. He was drafted into the 370 U.S. Army Air-force Base Unit.

He was given an honorable medical discharge and entered Fitzsimons General Hospital for one and a half years.

Walter received the highest technical training honor from the American Academy School of Horology in Denver, Colorado. As requirement for his certificate in advanced horological studies he assembled his own watch from raw materials and basic stock plates under the supervision of one of Switzerland and America's most noted horologists.

Walter was united in marriage to Clarabelle Kovanda on March 20th, 1948 in the First Methodist Church in Geneva, NE. Following their marriage they made their home in Exeter, NE, where Walter established his business as The Smith's Jewelry for 30 years.

Walter enjoyed hunting, woodworking, and taking care of his roses. He was a Boy Scout Assistant Leader, volunteer on the Exeter Fire and Rescue Unit. Walter was a 61-year member of the United Methodist Church of Exeter, NE. and served on the church board.

Posted by Leesa Bartu at 9:11 AM No comments: 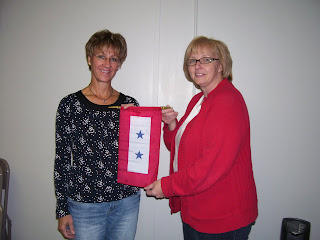 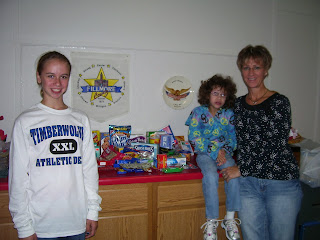 During the meeting, Auxiliary members assembled items to send to Alex Due who is currently serving in Iraq. Pictured are from the left Alex's sisters, Janey and Anna and mother Kay Due with the items donated by Auxiliary members.

Members packaged goodies for Alex Due serving in Iraq. Kay was presented a 2-Star banner for her sons, Alex and Anthony.

Marsha Jorgensen Co-Chairman of the Exeter Avenue Holiday Sampler gave her report on the event.

Card of thanks and donation was received from the Schiefelbein family.

Make a Difference Day will be the fall cleaning of the outside entrance to the Exeter Care Center.

Motion moved to give a monetary donation to the 2009 Stand Down in Omaha for T-shirts, socks, shampoo, soaps and toothpaste for homeless Veterans.

Posted by Leesa Bartu at 1:48 PM No comments: 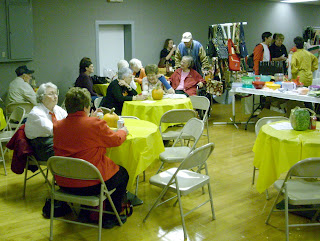 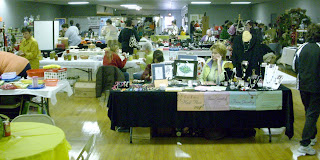 It was a sold out show Saturday morning as the Exeter American Legion Home opened its doors for the First Annual Exeter Avenue Holiday Sampler.

With over forty vendors, visitors had the opportunity to shop for a wide variety of products. Jewelry, cooking items, food products, painted items, photography and scrapbooking items were just a sampling of the sampling of items for sale on Saturday.

The Exeter American Legion Auxiliary hosted the event and also sold homemade kraut pockets and fresh made kolaches at the Exeter Avenue cafe. The group will use the funds raised to help maintain the Legion facilities. The group is already in the planning stages for next years event which will be held on October 23.

See additional photos in the slide show on the left sidebar.
Posted by Leesa Bartu at 11:29 PM No comments: 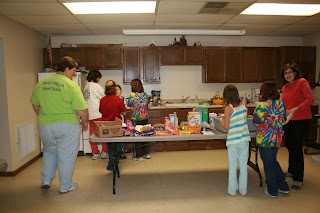 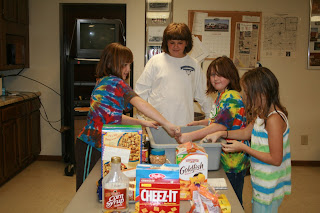 From the left Hannah, Tara, Vicki and Josie get things mixed up. 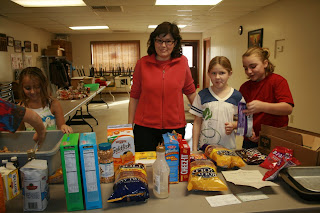 From the left Josie, leader Becky Erdkamp, Janey, and Kaitlyn check out what's next to make. 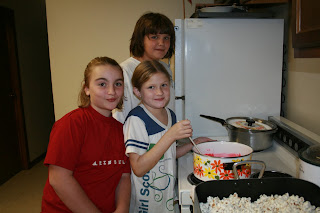 Kaitln (left), Tara and Janey (stirring) making up a batch of cinnamon popcorn. 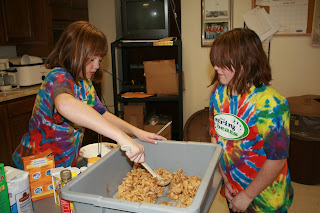 Hannah (left) and Vicki (right) mix up some Halloween mix.
Members of the Exeter, Troop 390, have been working on some of the badges in the Junior girls scout level.

On Friday, with no school, the girls spent the day working on their Let's Get Cooking badge while making items to sell at the Exeter Avenue Holiday Sampler. They made lots of cinnamon popcorn, Halloween mix (sweet and salty mix) as well as puppy chow. The girls also bagged up all of the products they made and some that were homemade by others and donated.

Together the girls made smoothies and nachos for lunch. They spent some of their day making posters for the sale the next day. They celebrated the birthday of the founder of girl scouts, Juliette Lowe, with a cake made by Tara Mueller.

After cooking and packaging on Friday, the girls and their leaders worked all day Saturday at the Holiday Sampler almost selling out of their product. Girls in the troop are: Josie Hulse, Hannah Beethe, Kaitlyn Vavra, Janey Erdkamp, Tara Mueller, and Vicki Androyna. Their leaders are Becky Erdkamp and Anita Mueller.
Posted by Leesa Bartu at 11:04 PM No comments: 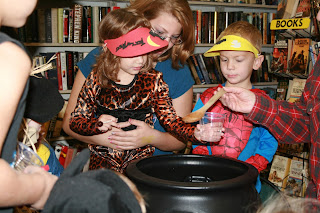 CeCe Murphy dumps a bunch of bat eyes (raisins) into the witches brew the kids created at the Exeter Halloween Story Hour. 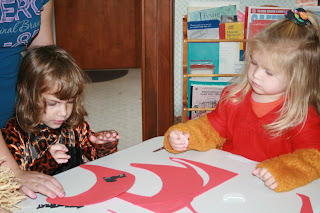 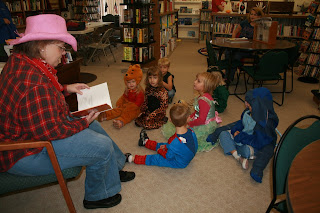 The preschool kids enjoyed listening to Halloween stories at the Story Hour.
There were scarecrows, clone troopers and princesses at the Exeter Public Library Story Hour on Friday morning. The preschool crowd, with a few elementary students sprinkled in, enjoyed their own time Friday while the K-3 grade were invited to a Saturday morning story hour.

The kids enjoyed Halloween story books, read by Cowgirl Librarian Nina Bartu. Next, were several fun relay games including a race for candy (which the kids got to keep) and a pumpkin over under relay.

Next was a halloween visor craft. The preschoolers enjoyed cutting out their own sunvisors and then decorating them with stickers. Before reading more stories the participants helped Cowgirl Nina mix up some witches brew with skin (popcorn), bats eyes (raisins), witches eyes (chocolate chips) and other exciting Halloween items.

See more pictures in the Halloween in Exeter slide show on the left side of the page.
Posted by Leesa Bartu at 10:46 PM No comments: