Congratulations to the Exeter-Milligan Lady Timberwolves on their win at the MUDECAS Tournament.  They defeated the Meridian Mustangs 51-36 to take the Championship in the B Division!
Posted by Leesa Bartu at 1:22 PM No comments: 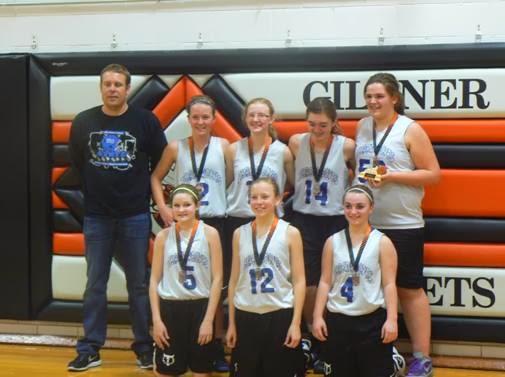 Congratulations to the Exeter-Milligan Junior High Basketball "A" Team for it's third place finish at the Giltner Tournament.  Pictured back row from the left:  Coach Jackson Krejci, Kelsey Bigelow, Hannah Horne, Hannah Beethe and Tara Mueller.  Front row from the left:  Janey Erdkamp, K.K. White and Kaitlyn Vavra.  Also a special congratulations to Tara Mueller as she was named Sportsman of the Tournament for the 7th and 8th grade girls divison.  Tara is holding the trophy in the picture.

The Exeter-Milligan Junior High Girls and Boys will be in action this afternoon with the girls starting at 12:45 and the boys at 2:00 p.m. versus McCool Junction.  Games will be played at the Exeter site gymnasium.
Posted by Leesa Bartu at 10:31 AM No comments:

A Funeral Mass for Denise will be held on Tuesday, January 14, 2014 at 10:00 a.m. at St. Stephen's Catholic Church in Exeter. Father Tom Kuffel will officiate the Mass.

Visitation for Denise will be held on Monday from 1:00 p.m. to 5:00 p.m. at the Farmer Funeral Home in Exeter. A Rosary will be held at 7:00 p.m. on Monday at St. Stephen's Catholic Church.
Burial will follow the Funeral Mass in the Exeter Cemetery. Memorials are directed to the family to be designated at a later date.

Denise was born in Lincoln, NE and lived there until she was 7 when her family moved Kansas City, MO. When she was 12 years old her father retired from professional baseball and two years later he took a job teaching and coaching at John F. Kennedy College in Wahoo, NE. So when she was 14 she moved to Wahoo with her family and then attended Bishop Neumann Central High School and graduated from there in May of 1969. She then attended John F. Kennedy College where she majored in Elementary Education and met a young man from Williston Park, Long Island, New York. She graduated from John F. Kennedy College in May of 1972 and got married in June of 1972. Then both her and her husband went to Georgia to start their teaching careers and eventually made their way to Exeter, NE where they have made their home for the last 39 years. Denise spent 29 of those years teaching at St. Joseph’s Catholic School in York, NE where she touched many lives and was honored as Educator of the Year in 2012-2013 by the York News Times.

Denise was married to Robert J. Mahoney of Williston Park, New York, on June 17, 1972 and to them 2 children were born.

Denise was a member of St. Stephens Catholic Church in Exeter, NE and throughout the years was very active in the Altar Society as well as a CCD teacher and a CYO teacher for many years. Her faith was extremely important to her and she found a way to live it every day of her life through her ability to love, laugh, and forgive. The most important people in her life were her family and friends and she made sure that they knew how much she loved them every day of their lives.

Posted by Leesa Bartu at 9:37 AM No comments: 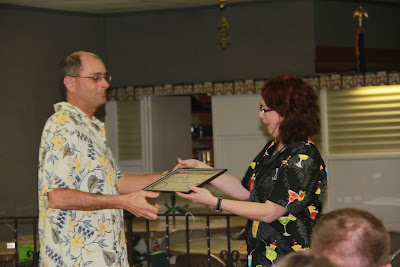 When it came time to present the Team Player of the year, Androyna noted that “this person can be counted on to serve on all calls.  You know you can count on them no matter what.  This is really an honor as it comes from our peers.  He has served as a mentor for me as long as I have been involved with the department. This year’s team player of the year is Alan Michl.”

This year the department also recognized the impact that Junior Fire Patrol Chairman Ed Mark has made on the community.  There are very few communities in the state who run a program like the one offered in Exeter.  This past October the Department extended the program, inviting State Fire Deputy Marshall Ray Nance to bring his Fire Safety Trailer and work with all of the Exeter-Milligan elementary K-6 graders.
Mark was presented with a certificate and a jacket recognizing his efforts.

The department enjoyed a dance after all of the business was concluded. 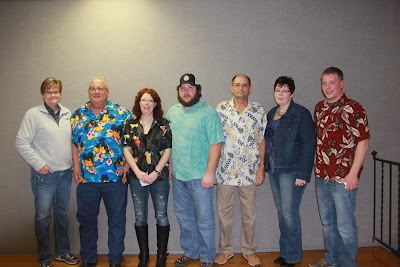 below - (L-R) Jacob Miller, Hope Androyna, Alan Michl, and Ed Mark were honored with special awards from the Exeter Volunteer Fire Department at their Holiday Party. 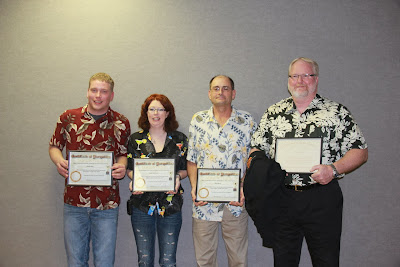 Posted by Leesa Bartu at 9:32 AM No comments: 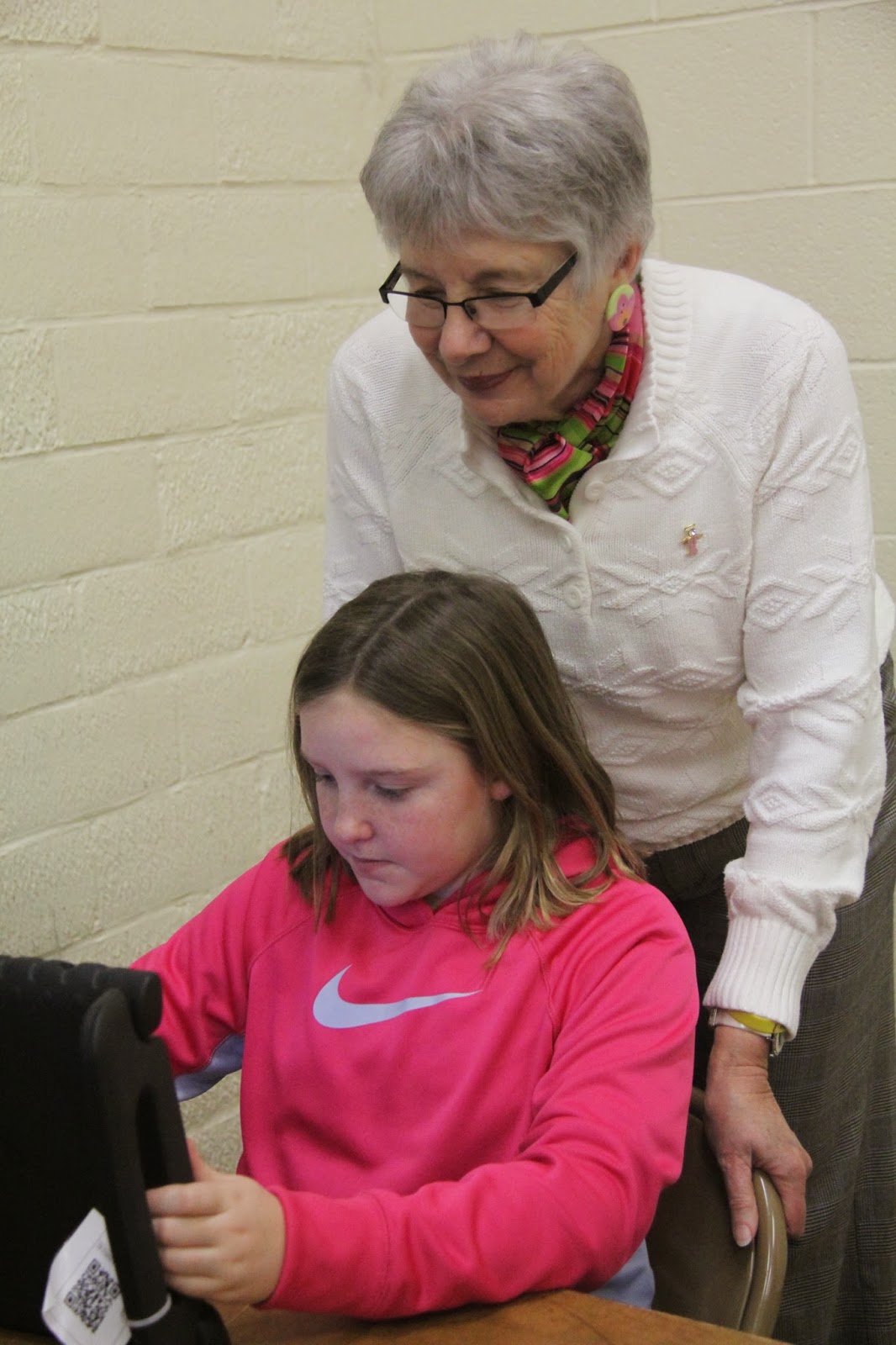 Fourth grader Emma Olsen shows her grandmother Vickie Olsen some of the many cool tools that her class uses on their ipads.  They made a photo collage using pictures they had taken with their ipads and were able to play math games together.  They also could record their voices and alter them.  Principal Laura Kroll was on hand to explain how some of the apps are used for learning.  In one app the students can create an avatar and they use this program to do a book report summary, creating a character in the book they read, summarizing the story and replaying it for their teacher.
Posted by Leesa Bartu at 7:30 AM No comments: 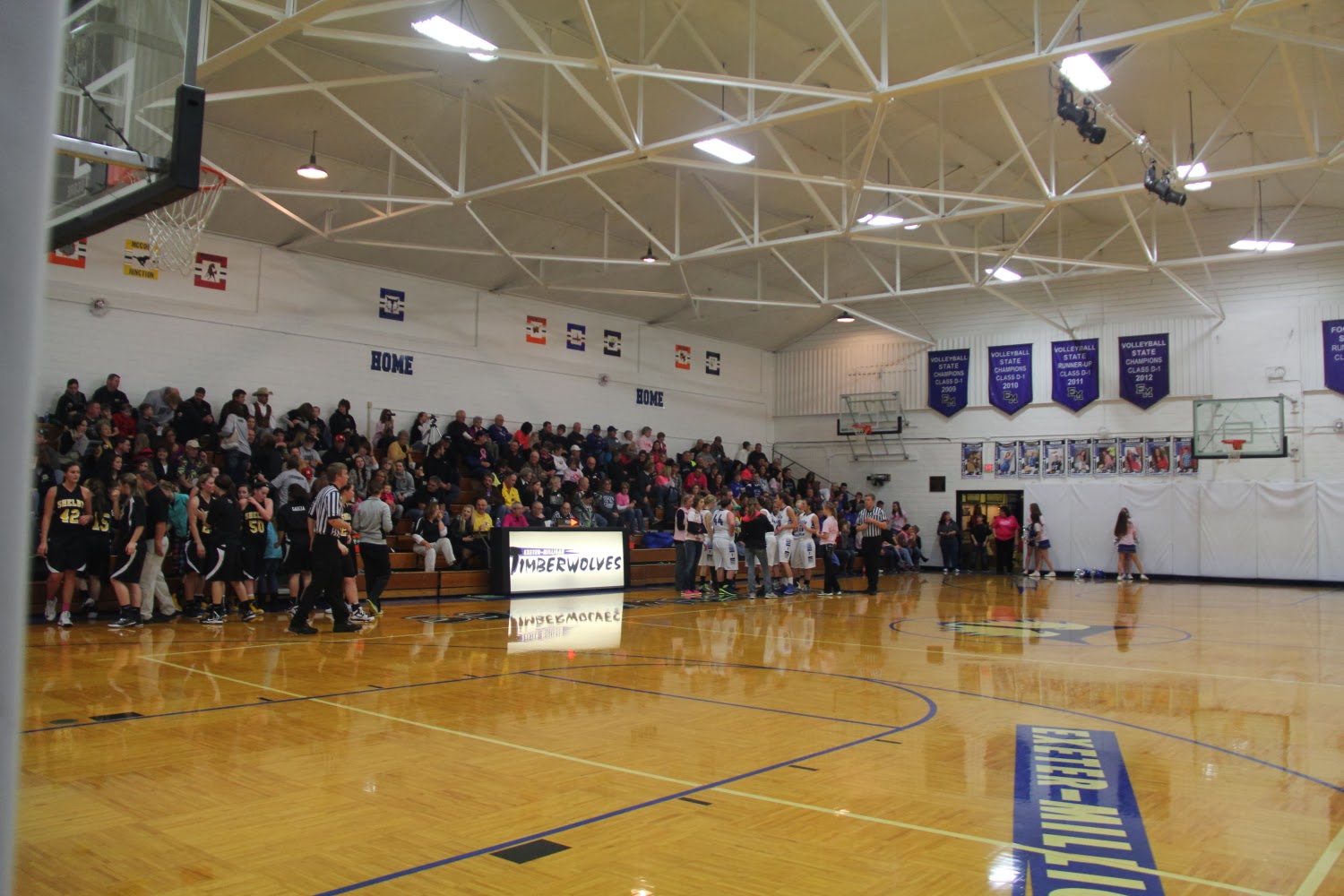 It was PINK OUT during Friday night's Basketball match up between Exeter-Milligan and Shelby-Rising City.  Lots of the Exeter-Milligan crowd were dressed in pink or their PINK OUT shirts.  The FCCLA had special prizes and all of the cake raffle had a pink theme to it.  At half time there was a shoot for a pop competition. 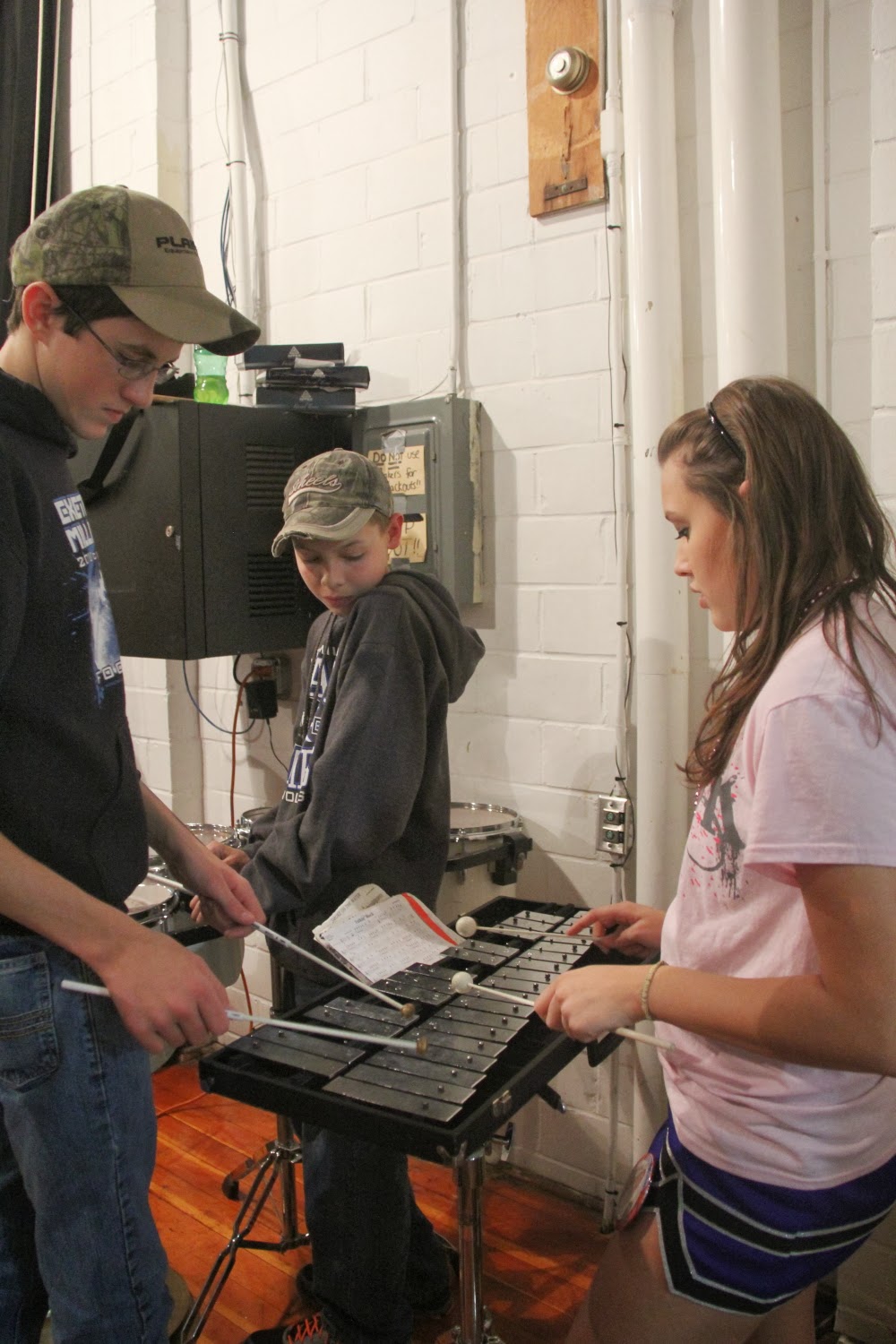 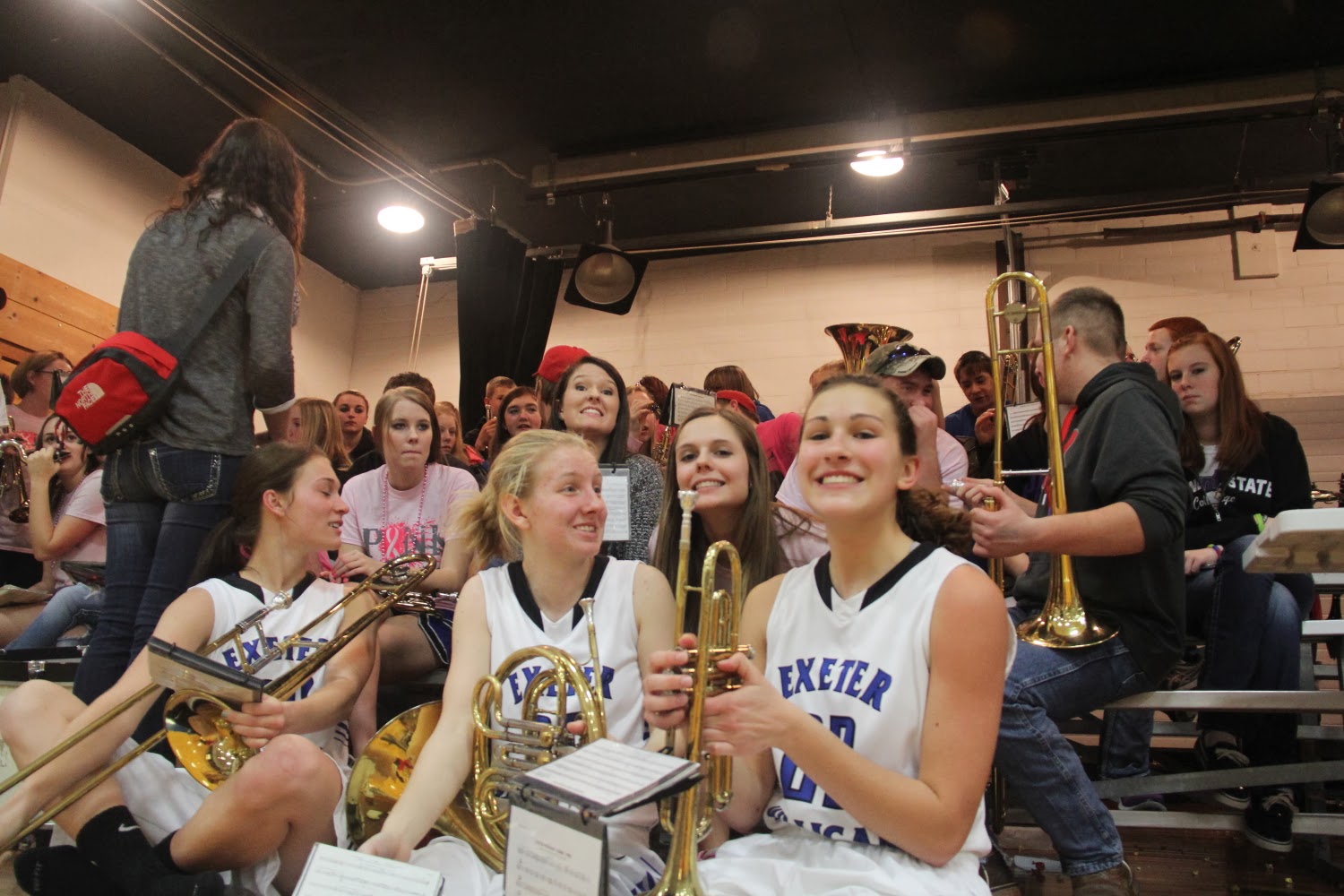