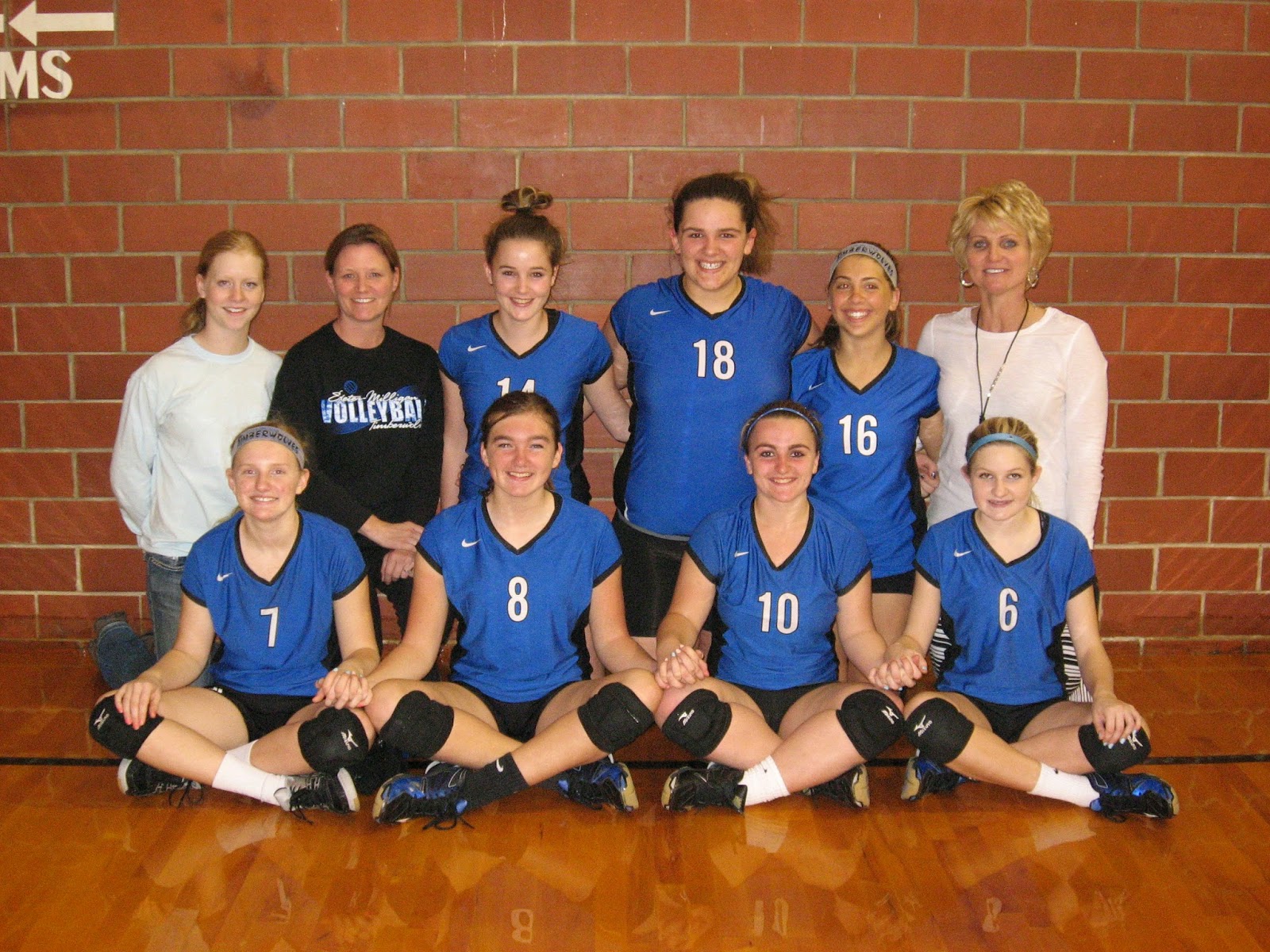 The Exeter-Milligan JV Volleyball team had a 12-0 record this year.  They won 24 sets and only lost one set the whole season.  Congratulations ladies!
Posted by Leesa Bartu at 7:30 AM No comments: 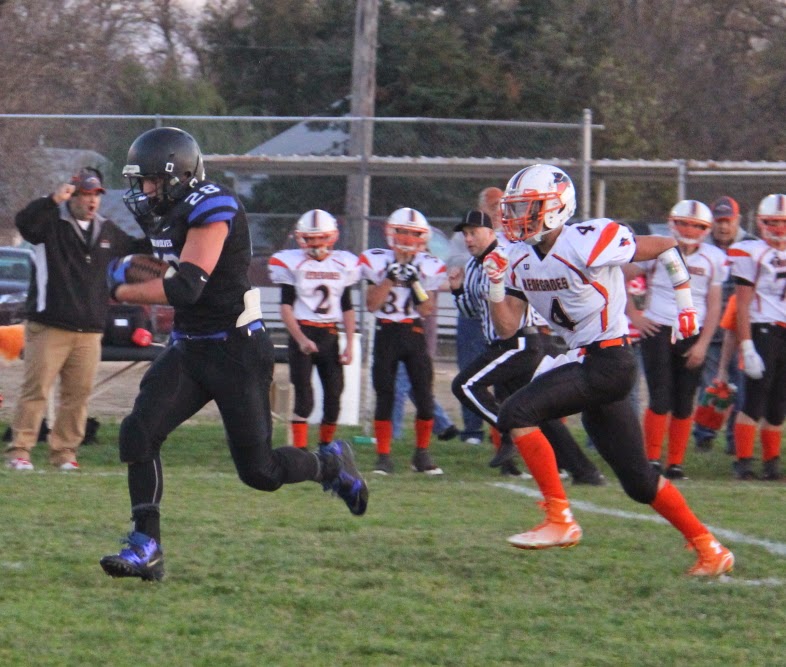 Kyle Jensen takes off leaving another Renegade in his dust.  The Timberwolves didn't get on to the board first Wednesday night but they made up for it quickly.  Final score Timberwolves 58 - Renegades 18.  The Timberwolves will meet Humphrey-St. Francis on Tuesday, November 11th at 6:00 p.m. in Milligan. 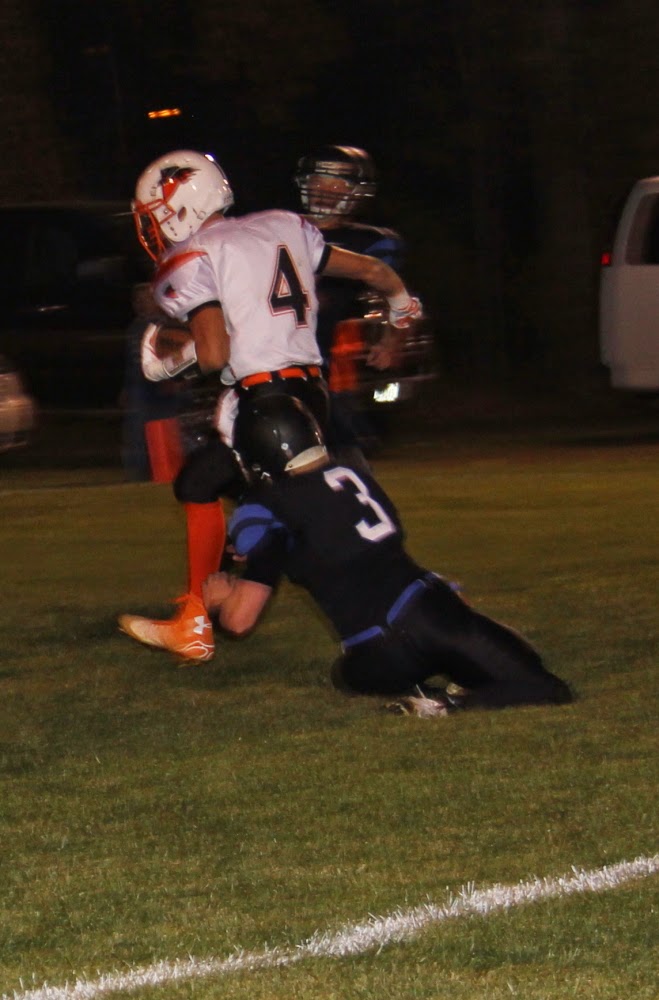 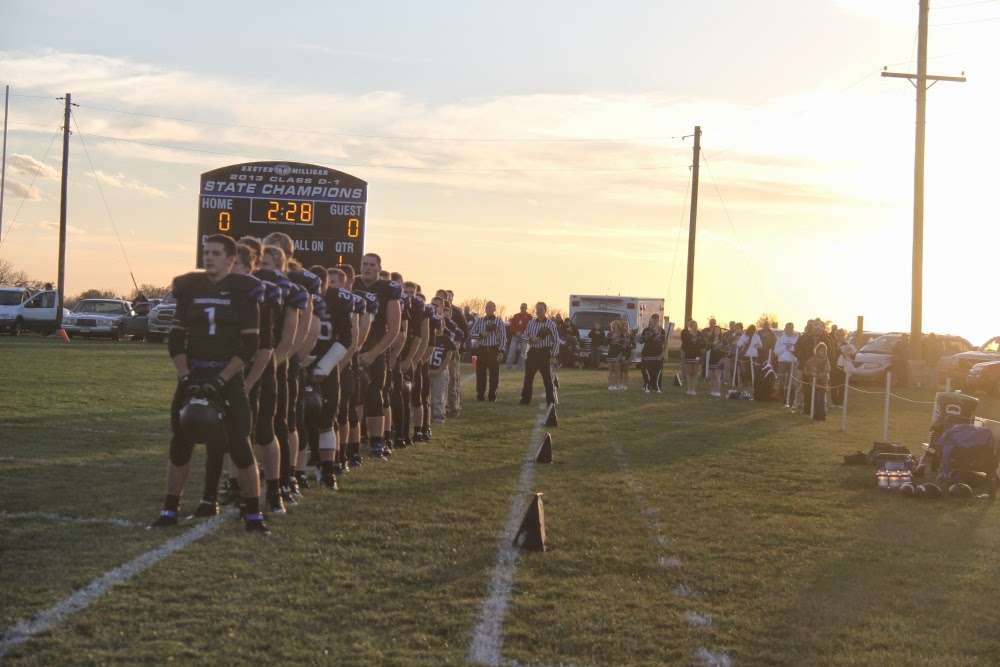 The boys of fall listening while the band plays. 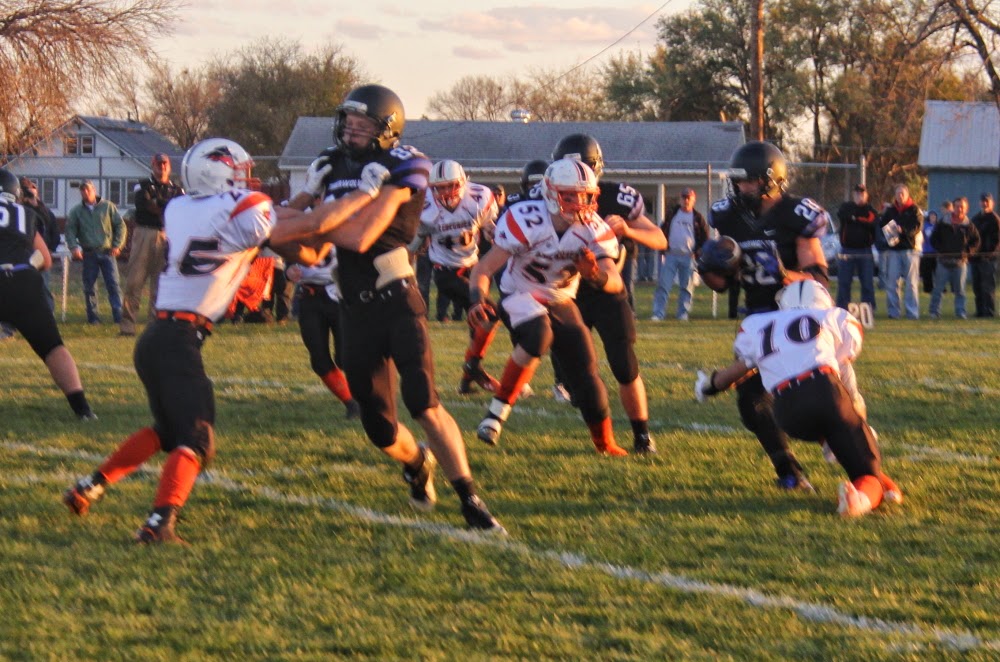 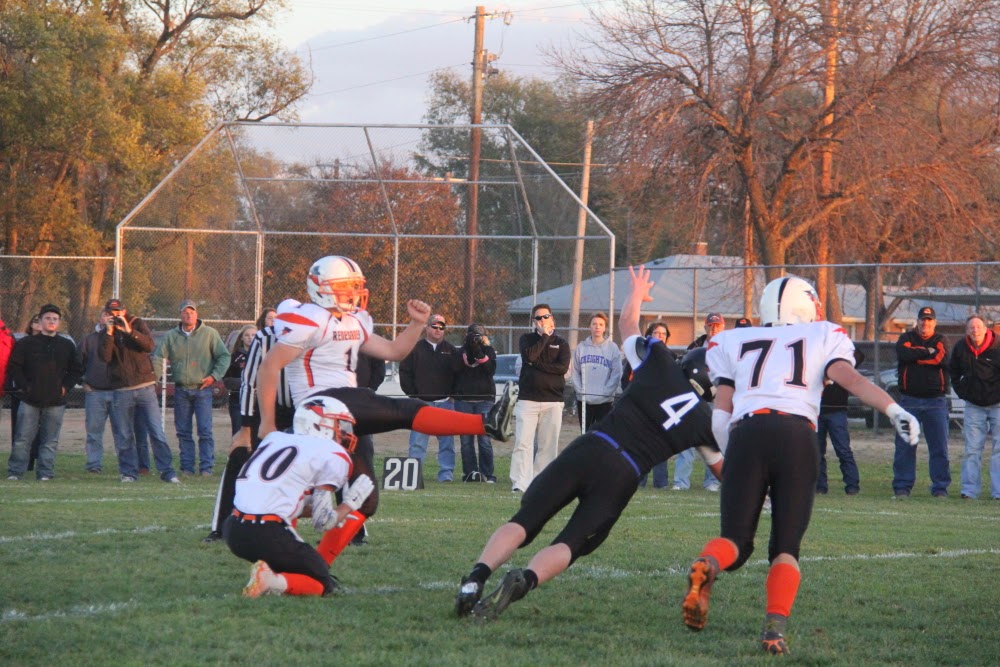 Jarrett Maxson going in to block the punt.

The unofficial election results are in and here are the results

County Supervisor:
Bob Mueller relected with 94% of the vote

The Exeter Veteran's Day Program will be held on Tuesday, November 11th at 10:00 a.m. at the Exeter-Milligan School Gymnasium.  The National Honor Society would like to invite area Veteran's for coffee and rolls in the schools cafeteria at 9:00 a.m.
Posted by Leesa Bartu at 7:30 AM No comments:

Exeter-Milligan defeated Hampton and Meridian Monday night to advance in District play to meet Johnson-Brock at Norris High School tonight at 7 p.m. Pictures below are from the sub-dsitrict Hampton game Monday night 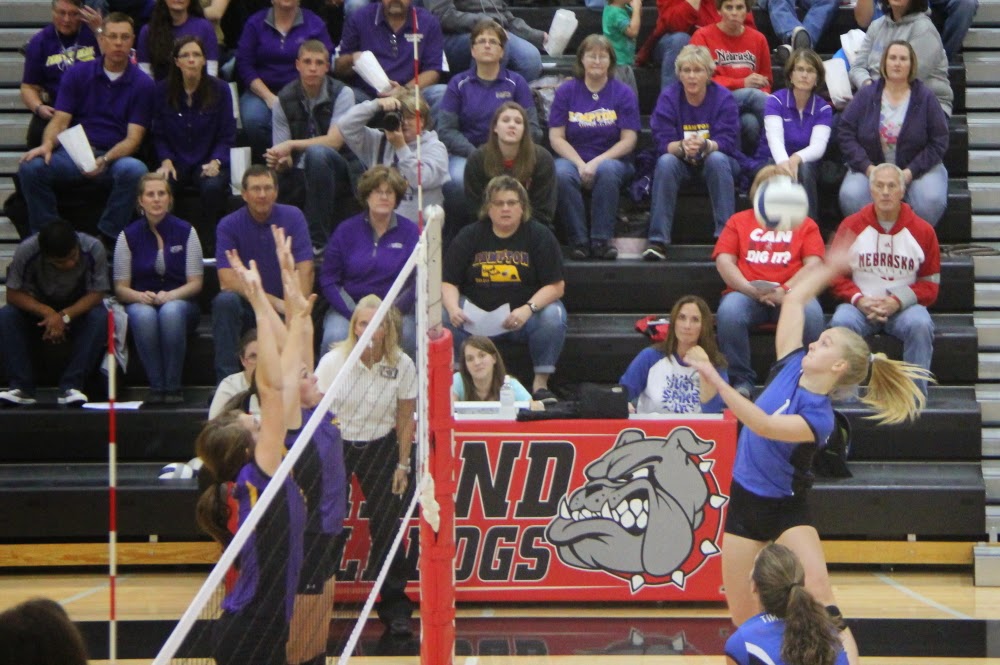 Madison Horne sends it back over the net (above).  Below, Sydney Hall sets the ball. 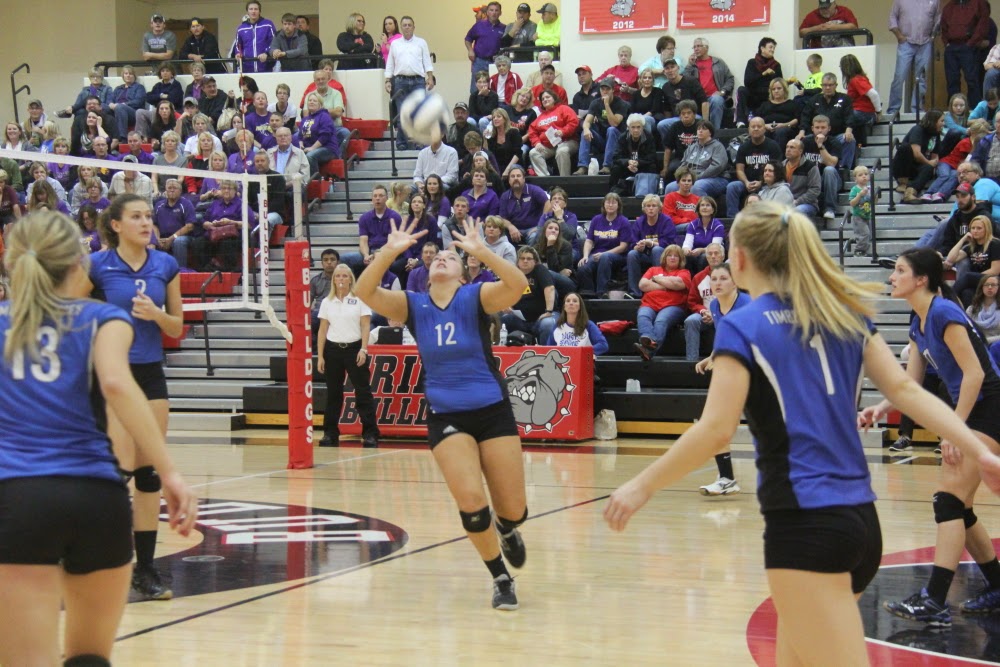 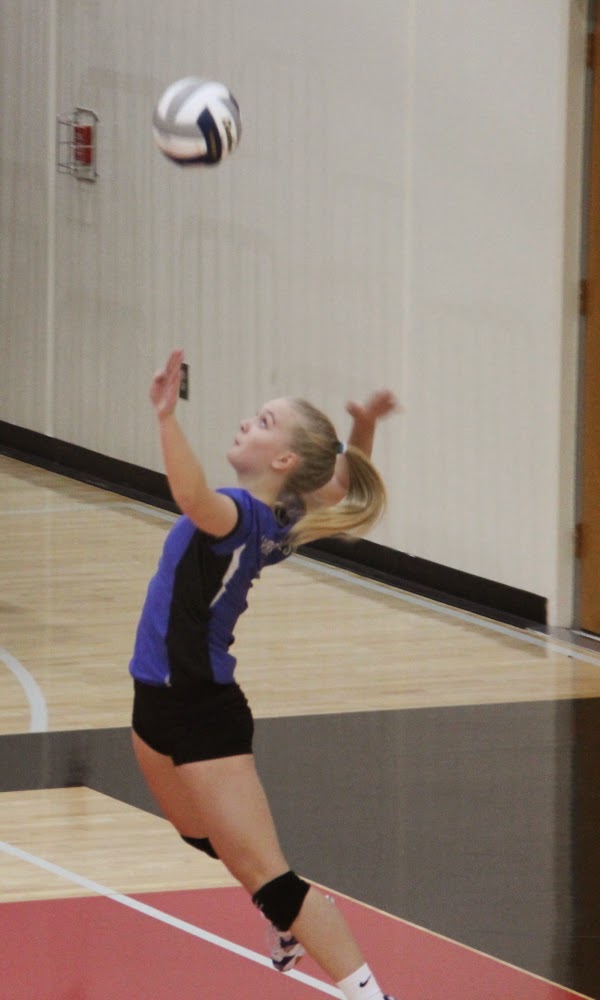 Above, Madison Horne serves and below, Hailey Luzum sends the ball back over to Hampton. 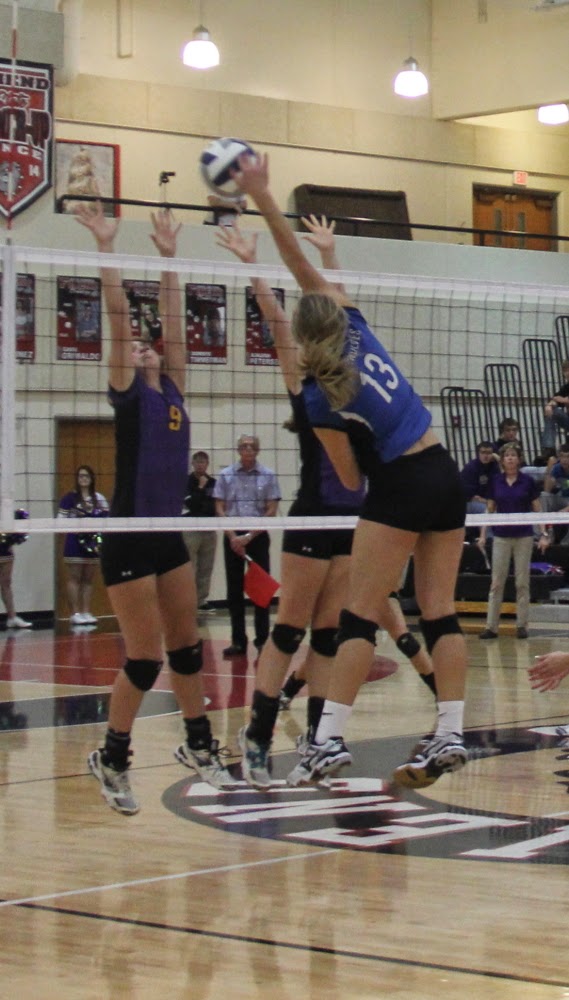 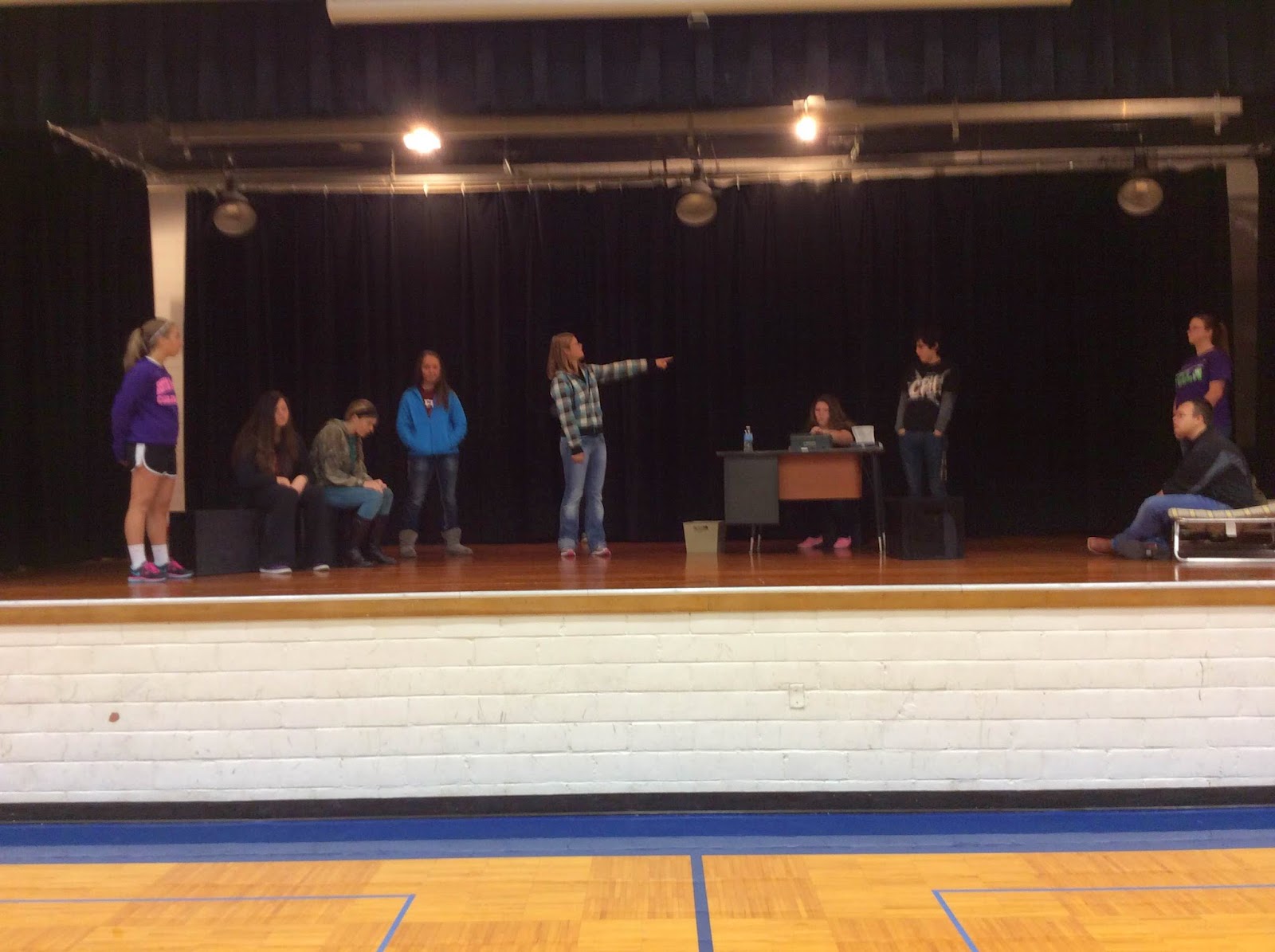 Exeter residents will have the opportunity to vote on Tuesday from 8 a.m. - 8 p.m.

In addition to state and county-wide elections Exeter voters will also have an opportunity to vote in these local elections:

General Obligation Bond
(Paving Road 24-Milligan Road)
For or Against

Posted by Leesa Bartu at 7:25 AM No comments:

Check your Exeter businesses and enter the three weekly drawings for a Turkey from the Exeter Chamber of Commerce.  Entries start today!
Posted by Leesa Bartu at 7:30 AM No comments: 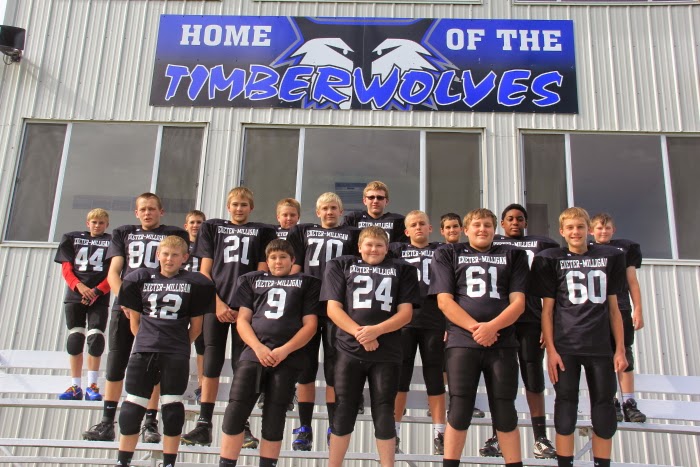 The Exeter-Milligan junior high football team recently completed their season with a 3-2 record.  This season, the team consisted of 13 boys from EM and 3 boys from Friend.

On September 9, Exeter-Milligan played Diller-Odell in Friend.  It was a close contest throughout.  However, Diller-Odell scored two, fourth quarter touchdowns to defeat the Timberwolves 20-34.  EM did not have an offensive touchdown in the game.  Joel Klemm started the scoring with a 55 yard kickoff return.  Later in the first quarter, Colton Bossaller returned a punt 35 yards for a TD.  Bossaller also added a 2-point conversion run.  On defense, Klemm recovered a fumble.  Edwen Baptista recovered a fumble and returned it 48 yards for a TD.

Exeter-Milligan traveled to Dwight on September 16 to play East Butler.  The Timberwolves opened up a 30-6 lead at the end of three quarters, in route to a 46-30 victory.  Joel Klemm and Colton Bossaller returned kickoffs 60 and 70 yards respectively for EM.  Klemm added a 20 yard TD run.  Bossaller had TD runs of 21and 39 yards.  Max Zeleny scored on a 31 yard scramble.  Two-point conversion runs were by Bossaller, twice, Klemm, Mitchell Manning, and Mason Kelley.

After a week off, Meridian hosted EM on September 29.  EM scored a touchdown in each quarter and held Meridian from scoring until the fourth quarter, coming away with a 30-6 victory.  Spencer Pribyl threw touchdown passes of 25 and 52 yards.  Slater Wells was on the receiving end of a 25 yard TD pass and Edwen Baptista caught a 52 yard TD pass.  Mitchell Manning ran for TDs of 8 and 12 yards.  Manning also ran in three conversions.  On defense for the Timberwolves, Wells, Baptista, and Colton Bossaller recovered fumbles.

Exeter-Milligan hosted Heartland on October 6.  EM fell behind 0-20 at half.  EM matched Heartland in scoring for the second half, with a final score of 20-34 in favor of the visitors.  Spencer Pribyl again had two TD passes.  The first was a 13 yarder to Edwen Baptista, while the second was to Colton Bossaller for 25 yards.  Bossaller also caught a 2-point conversion from Pribyl.  On defense, Joel Klemm and Max Zeleny recovered fumbles.

To finish the season, EM traveled to Deshler on October 13.  The Timberwolves played 8-man on offense and 6-man on defense in this game.  Exeter-Milligan scored the first 36 points of the game, coming away with a 36-20 win.  Each of the EM touchdowns came on runs.  Joel Klemm had a 54 yard run and Colton Bossaller added  an 18 yard run.  Mitchell Manning found the end zone on runs of 42, 6, and 40 yards.  Trever Zelenka passed to Edwen Baptista three times on conversion plays.  Slater Wells had a fumble recovery for the EM defense.
Posted by Leesa Bartu at 7:30 AM No comments: