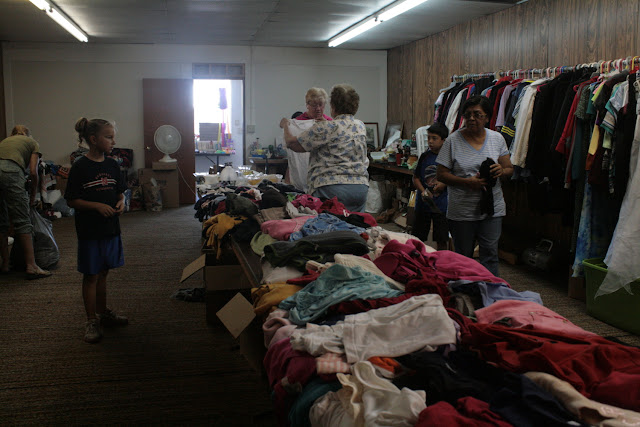 Shoppers check out all of the items at the Exeter United Methodist Church’s Garment Gadget Giveaway store. 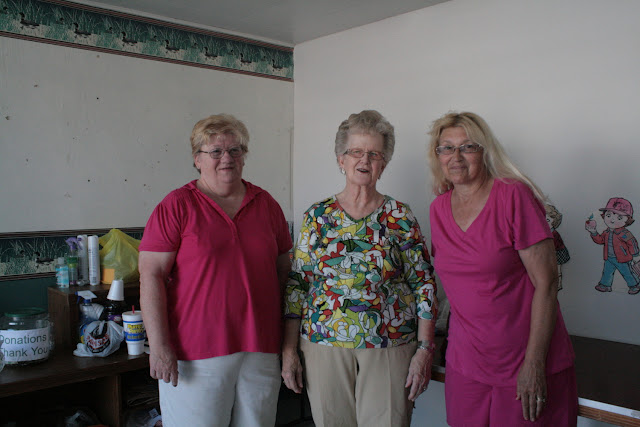 Some of the volunteers from the Exeter United Methodist Church paused for a photo while the store was open.  From the left they are Glenda Starkey, Roma Rhodes and Janet Miller. 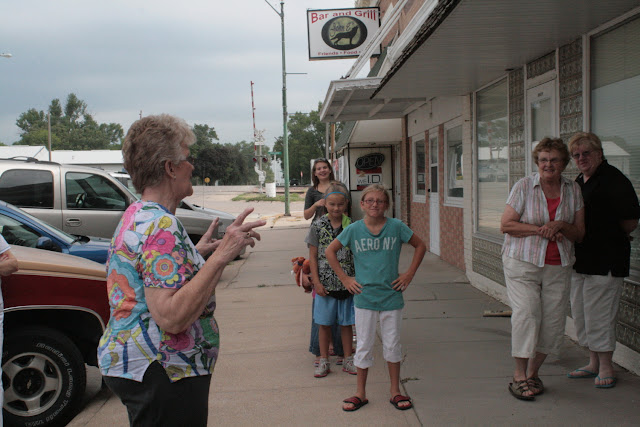 At the downtown fashion show Roma Rhodes, far left, describes the items worn by Kayla Geiger (with Jaiden Papik behind) and to the right are Evelyn Michl and Glenda Starkey. 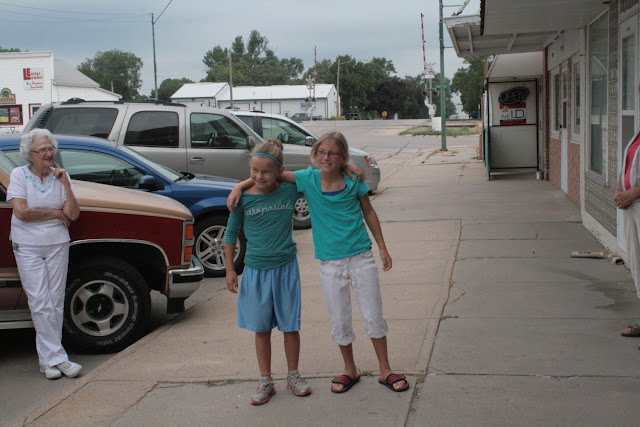 On their opening weekend the Exeter United Methodist Church Garment Gadget Giveaway Store held a Fashion Show complete with a main street runaway to show the variety and quality of items available in their shop.

One of the coordinators, Roma Rhodes, noted the sheer quantity of items that the store opened with this year.  “We have a lot of great stuff, and I mean some good stuff. I was gone for an hour earlier and it was great to come back and see the store full of people.”

What is unusual about the thrift store is that everything is free.  Absolutely free, no questions asked, take what you can use.  Last year the church was looking for some opportunities to serve the community and decided that this giveaway store in the summer could fill in the gap of the food backpack program that they coordinate during the school year.

They have added a small food pantry along with a school supply section this year to help bridge the gap over the summer and maybe supply some school items for those who need them.  The ladies in the congregation volunteer their time to work a weekend or whenever they can to keep the store open.

Fortunately their overhead for the store is low, they have a donation jar, but it helps cover their electricity costs as the building use was donated by Exeter building owner, Doug Anderson.

To open their store this year they held a fashion show with models from all over the state and nation (as far away as Washington State) to model some of the ”one of the kind” items found in the store.  Rhodes, who was the MC for the fashion show reminded the audience “once these items are gone, they are gone.”

The store, which is open on Friday’s and Saturday’s from 9 – noon through August 11.  The store welcomes donations and shoppers during their open hours and are located on main street in Exeter across the street from First National Bank.  At the store close, they will again donate the clothes to Country Neighbors in Beaver Crossing where the proceeds from the clothes that are sold will go to fund breast cancer research in Nebraska.

For Kids:
Hair Do's and Hair Don'ts
I Spy Numbers
Look and Find Iron Man
Tea for Two
Posted by Leesa Bartu at 3:37 PM No comments: