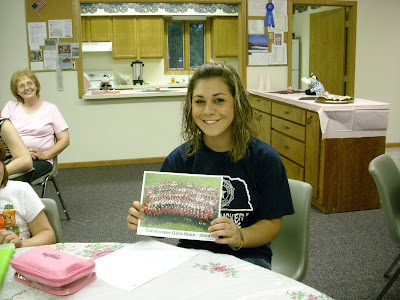 One of 420 girls at the summer program sponsored by the American Legion Auxiliary, Ana started her report by thanking the members of the Exeter Auxiliary, "It was one of the best weeks of my life."

The group is split into two parties with Ana becoming a member of the Nationalist party. She chose to do a service learning project during the week, working at the Lincoln Children's Museum.

With speakers and programs every evening Ana reported about some of the opportunities she learned about. The girls had speakers from the Nebraska National Guard and learned about the struggles of women in the service.

Each girl can run for office and Ana made a run for city school board but after her loss there became a district court bailiff. She had the opportunity to meet a lot of the judges and learn from them about how the court system works.

There were lots of fun activities for the participants including a Saltdogs game, a tour of the National Guard Armory and several joint sessions including a barbecue with the boys state group. "There's a lot of walking, too," according to Annette Gloystein, Exeter American Legion Auxiliary president and a counselor at the week-long event.

When asked by Auxiliary members if she would recommend the experience to others Ana was emphatic, "I definitely would encourage anyone to go. I walked away with a lot of friends and I learned so much about government."
Posted by Leesa Bartu at 1:43 PM No comments:

Word was received that Jane (Dyer) Chapman of Lander, Wyom. passed away at age 71 in Lander. She was a 1955 graduate of Exeter High School and the daughter of the late Frances Michl. Her husband, Garve Chapman was also an Exeter High School graduate. Memorial services will be held on Monday at the Methodist Church in Lander.
Posted by Leesa Bartu at 1:40 PM No comments: 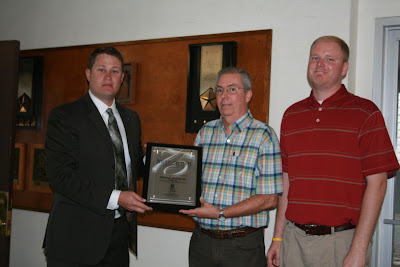 As part of the celebration, the Chrysler LLC sales manager for Omaha and Kansas City area, Ron Koch, presented George and Adam Erdkamp an award recognizing their 75 consecutive years as a Dodge brand dealership.

It all began when R. D. Erdkamp started with a franchise for Dodge and Plymouth vehicles in June of 1934 in downtown Exeter. In 1946 after World War II, R.D. moved the business to the current location into buildings he built on East Seneca Street in the 1930’s.

The business has always been in the family with R.D.’s sons, Don, Robert and Leonard joining the dealership in 1946. During that year they also added their current shop on the west end of the building.
In 1964 two of R.D.’s sons, Robert and Leonard, left the business to pursue other ventures and R.D. and Don ran the business alone until Don’s son George joined the dealership. “At that time there were five new car dealerships in Fillmore County,” recalls George, “In 1960 the Dodge corporation split everything up and we were just Dodge.”

The three generations working together was short lived as R.D. passed away at the age of 86 in 1971. In 1982 Don retired and sold the dealership to George and his with Kathy who own and operate the business today.

In 1977 the Chrysler franchise was added with Plymouth back on in 1991 and Jeep and Eagle in 1992. George’s son Adam noted they were at one time “a six line dealership. We had Dodge trucks, Dodge, Jeep, Eagle, Plymouth and Chrysler.” Eagle and Plymouth were phased out in 1998 and 2001 and currently the dealership sells and services Chrysler, Dodge and Jeep.

In early 2004 the dealership again became multigenerational as George and Kathy’s son, Adam and his wife Becky, returned to Exeter and Adam joined the family business. He is the fourth generation to be involved in the dealership.

The closing of nearly 800 Chrysler dealerships nationwide this summer definitely made for some tense moments in the dealership, “It was interesting with all the closing. We had some doubts and were hoping it wouldn’t happen. No one knew the formula,” said George.

It may have to do with their motto; “Our goal continues to be to make each customer’s experience as pleasurable and simple as possible. We also strive to provide excellent service after a sale.”

As the lone new car dealership in Fillmore County and one of the few remaining Dodge dealers in the area Erdkamp Motors plans to be around for at least 75 more years. They will host an open house to celebrate their 75 years in dealership on Friday December 4th from 3 - 8 p.m.
Posted by Leesa Bartu at 10:48 AM No comments: