Timberwolves Lead Huskies on Chase Down the Field 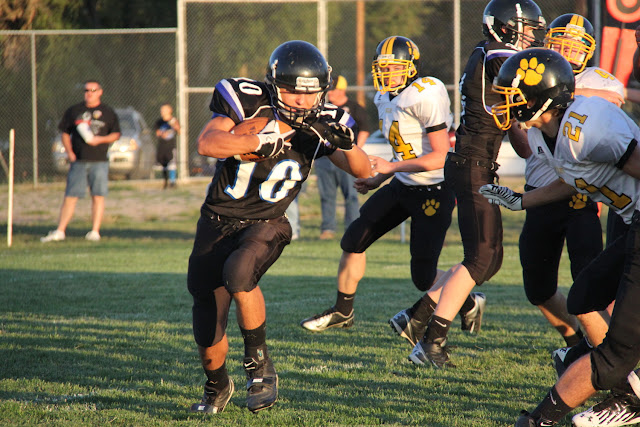 James Sluka #10 for the Timberwolves runs the ball in for a touchdown above and below.  The Huskies didn't have much success in stopping Sluka Friday night. 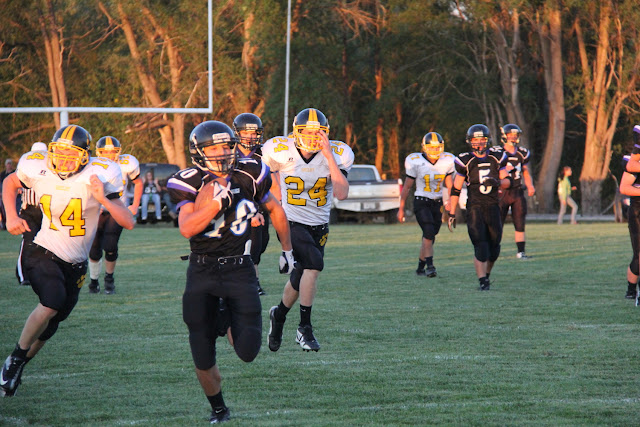 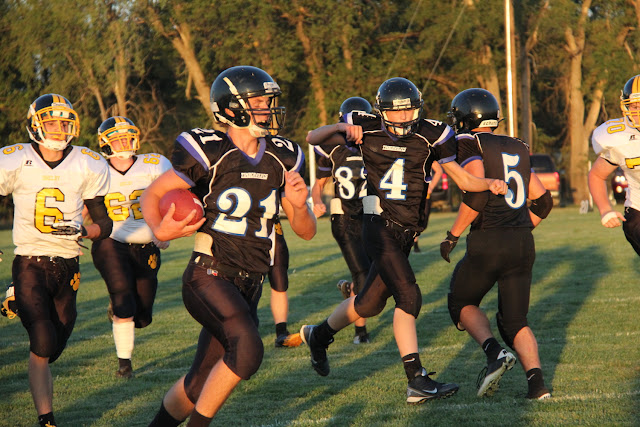 The scene was repeated over and over under the Friday night lights in Milligan.  The Timberwolves, playing their first home game along with it being homecoming, let the Huskies know they were in Timberwolf territory.

The first possession of the Huskies resulted in a safety for the Timberwolves with just four minutes off the clock.  From there it was a firestorm of scoring for the home team.  The Timberwolves had scored two touchdowns by the time that clock had barely ticked off six minutes.

The Timberwolves continued to dominate the game scoring several more times during the second quarter.  They did allow the Huskies an addition score and with five minutes until half time the score was 62-14.

The Timberwolves continued rolling over the Huskies with some of the younger players having the opportunity for some game time.  The final score was 76 - 36 for another Timberwolf victory.  The Timberwolves are now 3-0 on the season and will travel to Johnson-Brock next Friday night.
Posted by Leesa Bartu at 1:32 PM No comments: 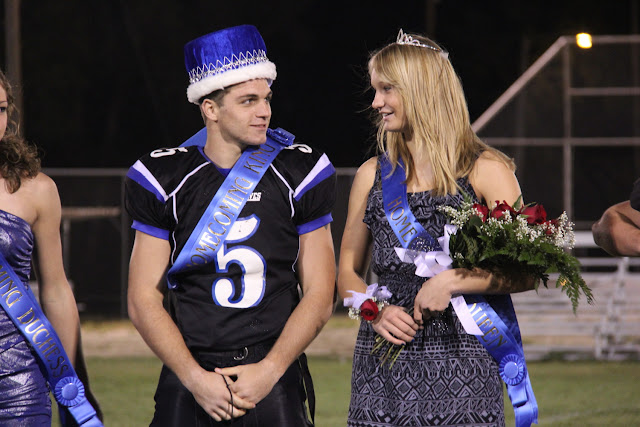 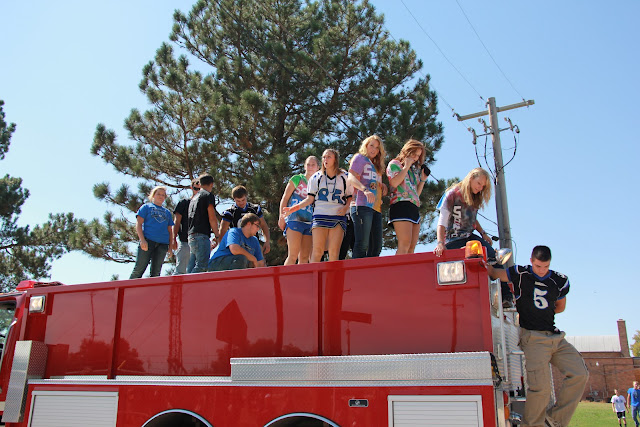 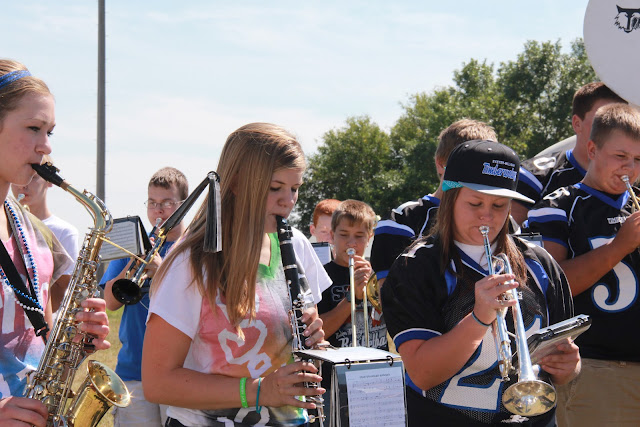 The Band Plays On! Senior members of the football team Blake Papik (left) on Robbie Androyna (right) strut their cheerleading prowess for the crowd.  The crowd was pumped and Androyna won the most votes.

Exeter-Milligan Cheerleaders held the Homecoming Pep Rally to help the Timberwolf family get ready for Friday nights football game versus the Shelby Huskies.  During the pep rally the senior girls made over the senior boy football players into cheerleaders and let the crowd decide who was the best cheerleader.  The senior girls playing softball had to hit a t-ball while blindfolded to see who get hit a wiffle ball the farthest and the senior volleyball players had to serve while blindfolded.  The Exeter-Milligan band played several numbers.  The cheerleaders performed a dance number to end the pep rally
Posted by Leesa Bartu at 9:47 AM No comments:

Exeter-Milligan announced the Homecoming Court earlier this week.  All week long the students have been celebrating the theme "A Day At the Beach" while gearing up for Friday night's Homecoming football game versus Shelby.  The pep rally will be at the Exeter site football field at 1:55 pm.  The game starts at 7:00 in Milligan.

Rose Bush with a Story 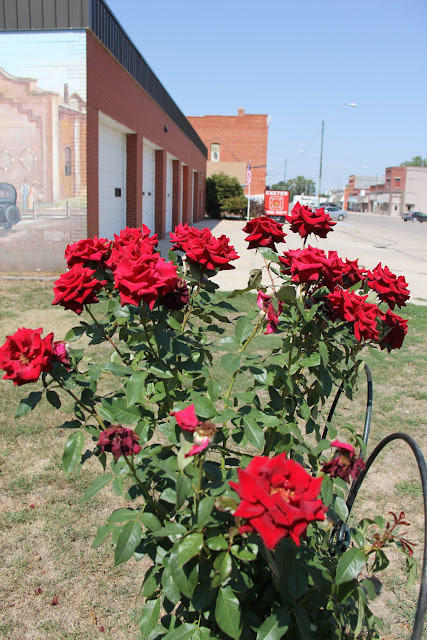 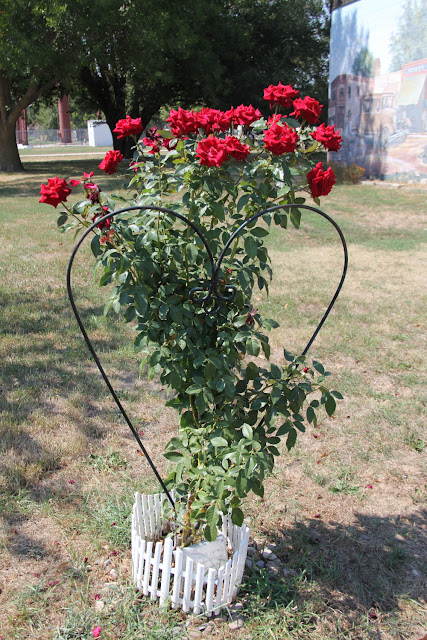 The Exeter G.F.W.C. Woman’s Club planted this rose just south of the Exeter Fire Hall downtown.  Since it was planted the club has taken turns watering and caring for the rose.  The red rose is the G.F.W.C. flower and was adopted in May of 1940 by the Milwaukie council.  Club Member Reba Toothman shared the information along with the reason behind this particular rose.  “In 2008 the current state president asked that we plant a red rose honoring our G.F.W.C. international president, Rose Ditto, in a visible public venue in our community.”
Despite hard soil, the club got the rose planted, Erma Adamson donated the beautiful heart shaped arbor behind it and it has flourished with the care that it has been given. Several times this summer the bush was loaded with blooms.
Posted by Leesa Bartu at 9:53 AM No comments: