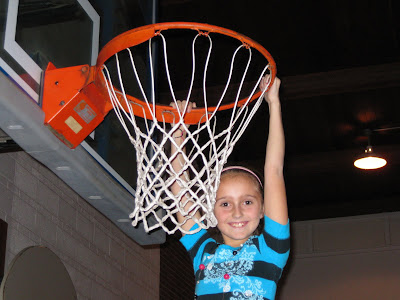 Josie Hulse is doing some serious hang time as we prepare for indoor activities for P.E. This is one of the sports that the students will participate in these next few months. They will play hockey,
Missouri kickball, dodgeball, kickball, wiffleball, as well as basketball. - (submitted by PE teacher Bob Mahoney)
Posted by Leesa Bartu at 10:02 AM No comments: 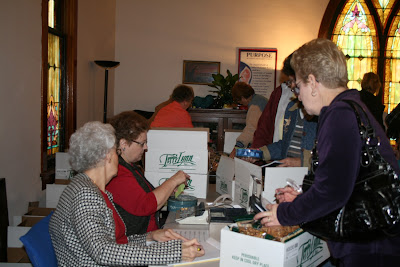 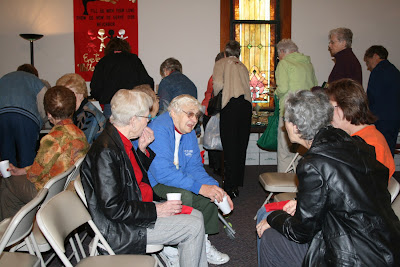 Enjoying some coffee and a cookie after "shopping" at the cookie walk were from the left Jeannine Krejci, Doris Hall, Sue DeJonge (partially hidden) and Karen Chapman.
Cookie Monster couldn't have finished off the 120 dozen homemade cookies faster than the ladies who visited the annual Exeter United Methodist Women cookie walk.

Opening at 9:00, by 9:30 a.m. the ladies who were placing the cookies on trays for the walk had emptied all of their containers. Each year the ladies think they have made too many cookies and each year they sell out of the homemade holiday treats.

During the event they also host a dried fruit and nut sale of very high quality products. The sale draws guests from all over Exeter and many of the surrounding communities and counties. A variety of tins were available for purchase and then each tin purchaser could pick the cookies along several tables to fill their tin.

After making their purchases many of the patrons chose to enjoy the free cookies and refreshments while taking some time to fellowship.
Posted by Leesa Bartu at 8:46 PM No comments: 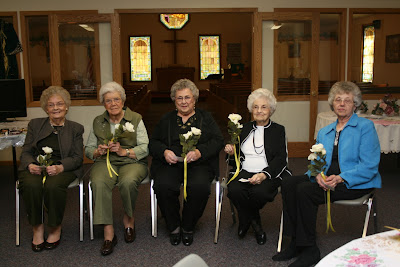 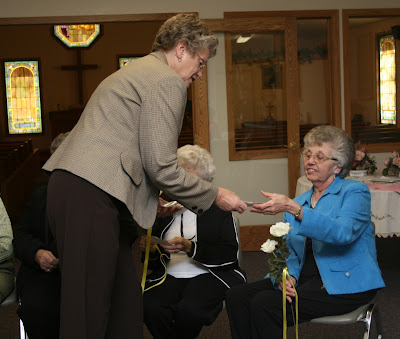 Five of their members have served for at least fifty years as active members of the Exeter chapter of the G.F.W.C. Woman's Club.

After honoring the members, the presidents took a moment to ask the ladies what year they joined the Woman's Club. Marilyn Manning recalled several neighbors coming over after she was married and she became a member in 1952.

Lois Ann Kuska recalled meeting in 1948 at the home of Loy Farmer and everyone wearing their pillbox hats to the meeting. Wilma Murphy, who once served a term as president of the club, became a member in 1940.

The Exeter G.F.W.C. Woman's Club has been active in Exeter since 1898 becoming a member of the Nebraska Federation in 1900 but was "disbanded in 1917 to help with Red Cross work during World War I" according to the Exeter History Book and the club was "reorganized in January, 1926. There were fifty ladies, charter members."

Today, the club is active in the community. Among their many activities they volunteer at the Exeter Care Center, participate in Make a Difference Day and host a special Arbor Day celebration honoring the new babies in the community each year.
Posted by Leesa Bartu at 8:08 PM No comments: 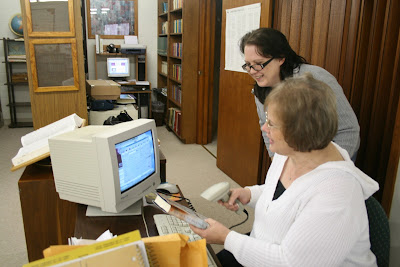 There's a new face at the Exeter Public Library this week. The Library Board hired Exeter High School graduate Jessica Votipka to serve as the new assistant Librarian in Exeter.

Votipka, who also works for The Sentinel, in Friend, happened to have Wednesday's off from her job as a graphic designer/writer at The Sentinel.

Saturday morning duty will be shared by Librarian Nina Bartu and Votipka, with them rotating weeks working the
nine to noon shift.

Librarian Nina Bartu (in front) shows new Assistant Librarian
Jessica Votipka the ropes at the Exeter Public Library.
Votipka spent most of last Wednesday training for her solo flight this last Wednesday. She will be learning the computer system to check out library media and keep statistics on library patrons. Next time you need a great read, visit the Exeter Public Library open Monday, Wednesday and Friday from eight to five (closed over the noon hour) and every Saturday morning from nine to noon.
Posted by Leesa Bartu at 2:58 PM No comments:

Wondering about the metal pieces in the park? 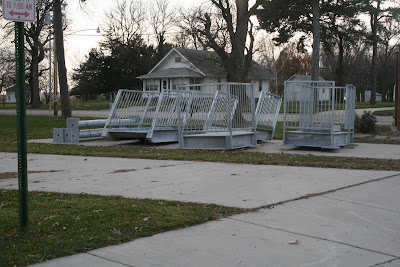 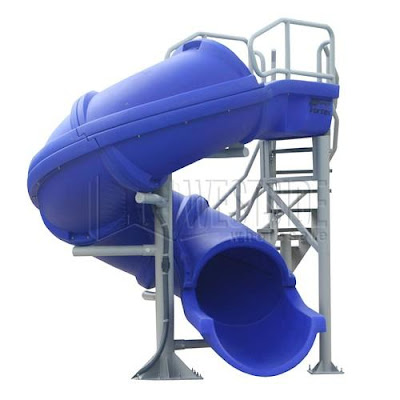 Have you driven by Gilbert's Park lately and seen the strange metal pieces on the camping pad? Is it a new bridge, someone's stock parts? No, it's parts of the new slide for the pool. After placing an order this summer just recently they delivered the slide. Some of the pieces were too heavy and large for the village to store inside so they decided to store them close to the pool.

When put in place next spring the pieces will spend all winter outside so the elements will not damage the pieces.

There was not a picture available of the actual slide that the village purchased so the slide picture to the right is similar but not exact as to what the village has purchased.

According to Village Chairman, Alan Michl, a crane will have to be used to put many of the large pieces in place because of their weight.

Patrons of the pool this summer will have another wonderful feature to use this summer as the slide is installed. The village continues to need donations to pay for the purchase of the slide. Contact the Village Office for more information.
Posted by Leesa Bartu at 10:01 AM No comments: 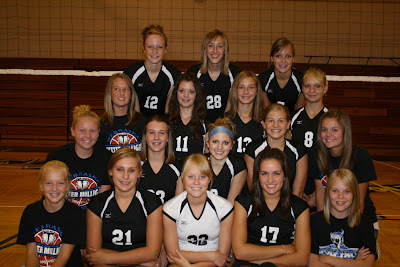 The girls were on fire as they led for almost the entire length of the three sets. The third set found the Timberwolves trailing by two at the most but they came back with fire after a kill by Heather Pribyl and quickly eliminating the Howells Bobcats.

Congratulations to the girls and their Coaches - Darcy White and Laura Kroll.
Posted by Leesa Bartu at 9:22 AM No comments: