FCDC DIRECTOR ATTENDS 2018 HOUSING INNOVATION MARKETPLACE
“Agents of Change” was the theme of the 2018 Housing Innovation Marketplace conference held in Omaha last week.  Patt Lentfer, FCDC Executive Director, was among 400 attendees who were interested in making changes in housing so that all populations would have a safe and affordable answer to their housing needs.

Because there is a housing shortage in most rural communities and there are all types of housing needs, the conference sessions was divided into five tracks: Single Family Housing, Technical Topics, Workforce Housing, Multi-Family Housing, and Housing & Homelessness. Attendees could attend six sessions all in one track or go between tracks.

Mark Robinson was the keynote speaker on Tuesday.  He is a renowned motivational speaker with a magical touch. 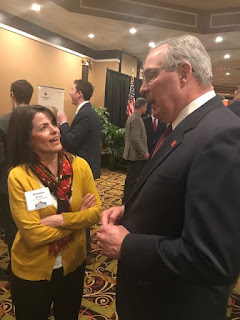 Other panels had presenters who talked about International Trade, Ag Diversification in Small Nebraska Communities, and the Growth of Food Processing Industry in Nebraska.

Bill Moos, Athletic Director of the University of Nebraska, was the speaker at the Celebrate Nebraska Agriculture Reception on Wednesday Evening.  Greg Ibach, Under Secretary of the U.S. Department of Agriculture’s Marketing and Regulatory Programs gave a USDA update at Thursday’s luncheon.

With agriculture being the number one business in Fillmore County, Lentfer said it was very interesting to think beyond our county and state and consider the impact of international trade, national organizations and diversity that can occur in any size of community.
Posted by Leesa Bartu at 7:30 AM No comments:

The Fillmore County Foundation board met on March 6, 2018 in Milligan at Charlie’s Pub.  Eleven Board members were present.

Grants were also awarded through the Earl and Jesse Wilkins funds to the Congregational United Church of Christ for restoration of their historic pipe organ and the Fillmore County public libraries for digitalization of newspapers.  Both of those grants require matching funds.  The committee generally supported funding projects to assist with housing in Fillmore County, Nebraska when further details are known.

The Fillmore County Foundation was founded in June of 1983 and since its inception it has been dedicated to the future and honoring the pioneer spirit by encouraging social, cultural and educational progress in Fillmore County.  During the 35 years of the Foundation nearly $2 million has gone back to the Fillmore County citizens in the form of community projects and scholarships.

Awards are granted in March and September of each year.  Individuals interested in applying for assistance for projects or with questions about the grant program may contact Scott Oliva at 402-629-4446.  Applications are available approximately one month prior to each meeting.  The next application period will be during the month of August 2018 for consideration at the September 11th, 2018 meeting.
Posted by Leesa Bartu at 7:30 AM No comments: 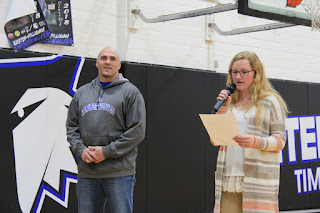 Above -  Scott Shanle is introduced to the Exeter-Milligan student body by Hannah Horne.


Below -Scott Shanle is surrounded by Exeter-Milligan students even after they had the opportunity for a question and answer period. They “might” have wanted to see his super bowl ring? 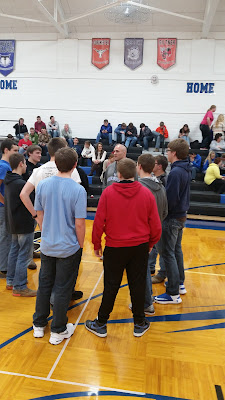 Seeing a Super Bowl ring up close and personnel was a thrill for Exeter-Milligan students.

Scott Shanle, a St. Edward, Neb. graduate walked on at the University of Nebraska before earning a scholarship to play for the University. After graduating, he went on to play in the NFL for the St. Louis Rams, the Dallas Cowboys and for the Superbowl Champion New Orleans Saints.

Wearing an Exeter-Milligan sweatshirt he was given the last time he spoke in Exeter, Shanle explained that he wears it regularly, “Of all of the speeches I’ve done I remember you more than any other.  I remember your compassion. You are everything a small town Nebraska should be about.”

Although he planned to talk about his football experience, “My story is not so much about sports but about the things you will face.  There will be obstacles along the way but you need goals.  Keywords are goals, perseverance and obstacles.”

Shanle talked about some of the obstacles he faced as he dreamed of a football scholarship to Nebraska.

One of the most important factors he learned was “trying to have a positive attitude during adversity which helped me get to the next step.”

This was especially difficult as he entered the NFL and eventually found himself picked up by the two teams he never wanted to play for, Dallas and New Orleans.

He shared about a special moment during the Super Bowl when he realized his team was going to win, “I saw all of my football moments playing through my head and I realized that moment would have never happened if I hadn’t made it through adversity.”

He encouraged the Exeter-Milligan students to set goals even though they won’t meet them all.  “You have to be ok with failure.”

He told the students there are three types of people, those who want, who wish and who make it happen.

Shanle encouraged the students to find their passion in life.  They may not recognize it now, but find something they like to do.

He also explained that he continues to write goals for himself as his career continues to change.  Even though he has left the professional football field behind, he continues to be involved as a TV analyst for the Saints.

He reminded them to remember, “You are still writing your story. . .times will get tough.  Have a positive attitude.”

The students were given an open question and answer time and spent over twenty minutes asking him everything from what his favorite color was to his opinion on Nebraska Coach Scott Frost.

He was asked if he had any advice for graduating seniors, “It’s going to be scary whatever you do.  There will be uneasiness and it will be uncomfortable.  Get through those moments and stay positive.  That moment exists.”

The students asked him where he enjoyed playing football the most, “In high school.  That was the most pure form of football without politics or business involved.”

He would love to move his family back to Nebraska and contribute to the Nebraska coaching staff in the opportunity arose.
Posted by Leesa Bartu at 7:30 AM No comments: