Second graders, like all K-5 students at Exeter-Milligan, are using a web-base program called, MyPath, this year. MyPath is a unique program that links data from NWEA (Northwest Evaluation Association) test scores to create a personalized learning path for each student. The program pinpoints learning gaps in reading and math. It adapts lessons to help students stay on track, get back to grade-level or even challenge students to move on to a higher level of learning. Since it is an adaptive learning program, instruction and pacing changes as the student answers questions. It may adjust questions to be more challenging when a child has reached mastery of a skill or it may provide additional review when a student continues to struggle with a particular task. This program even prioritizes the skills each child does. Teachers also can adjust and tailor assignments to coordinate with classroom learning needs. Students love the engaging instruction while building confidence in their learning. 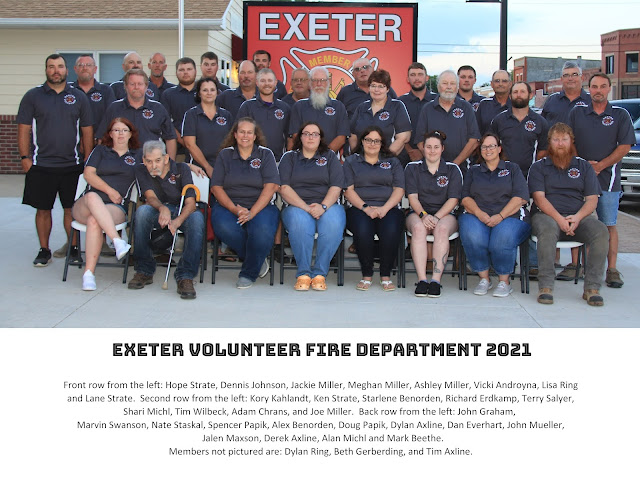 Pumpkin Painting was held at the Volkmer’s on Oct 15.

The scouts first spent some time with Beethe learning about what to do if there is a fire in their home.  Later during the evening the scouts drew a picture of the layout of their homes and planned a fire escape route.

Exeter-Milligan and Concordia University, Nebraska alumnus Carson Stokebrand returned to campus Thursday, Sept. 15, to share “The Truth about Rosa,” his twenty-two-minute documentary on immigration in Nebraska. Stokebrand also discussed the work that went into the film and his own experiences in broadcast journalism.

A shortened version of the documentary will air on NET television’s “Nebraska Stories” in November.

Exeter-Milligan Fifth Graders have the opportunity to learn all about fire safety and become Junior Fire Marshalls by attending all four of the Junior Fire Patrol Training Sessions.
The first session the students were able to learn about some of the fire equipment from the Exeter Volunteer Fire Department members.

Marlene Gallup of Exeter passed away on Friday, October 6th in Exeter.  Funeral services will be held on Monday, October 11th at 10:30 a.m. at the Trinity Evangelical Lutheran Church in Cordova, NE. Visitation Sunday at Trinity in Cordova from 2 p.m. to 8 p.m.

The Exeter American Legion Auxiliary held their annual Exeter Avenue Holiday Sampler at the Legion Home and also the Exeter Senior Center.  This year they even extended the event to include vendors outdoors.

The Exeter Village board met Tuesday with board member Bob Mueller absent.  After approving the minutes and invoices the board moved to a short agenda.

The board approved the annual certification of the roads program and Resolution 21-05, the Municipal Annual Certification of Roads Program Compliance.

The board discussed changing the new Perennial Public Power District annual lease from 12% to the amount that was previously collected, 13.6%.  “It’s the same as it was, they are just presenting the bill a different way,” explained chairman Alan Michl.

The board approved the annual lease with Perennial.

Providing health insurance benefits for employees was the next item on the agenda.  The board looked at the coverage employees currently have with their spouses employers and examined some quotes from a local agent. They also examined a plan from a national rural water association.  The board asked Maintenance Supervisor John Mueller to get more information on the options.

There was no marshal’s report.

Mueller gave his maintenance report starting with an issue at the ballfield. “One of the light posts at the ballfield looks like it was hit by lightning, the top of the post is splintered,” he explained.

He visited with Perennial about the options.  They talked about cutting the post off five feet and replacing the two broken light fixtures. The board discussed different options for replacing the lights.

Mueller reported that he completed the replacement of drainage culvert on East Boundary and plans to straighten the wood fence at Storybook park this week. He is also looking into cleaning and redoing some ditches on the north part of the village.

Clerk Becky Erdkamp reported that sales tax for July was $10,038.69 and August Keno was $164.52.  The board was approached about a resident wanting to donate some property to the village.  The board will have the paperwork drawn up for the resident to sign. The board held a brief discussion on the processes for using the government funds they received as part of the American Recovery Plan Act money. The board set the next meeting for November 9. 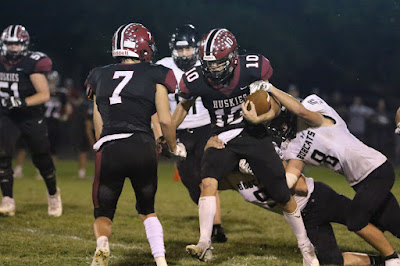 There are no two ways about it, it was ugly from the start in Henderson Friday night.

Heartland ran the kickoff back for touchdown and with just a few seconds off the clock they were up by six.

The Bobcats could make a lot of progress and with 654 left in quarter Heartland took over on downs and despite a holding penalty found the end zone and tacked on the two point conversion taking the lead by 14.

With 2:55 left in the first quarter Christian Weber sent a 28 yard pass to Chase Svehla who found the end zone for six points but the two point was denied.  6-14.

Heartland found the end zone with 1:15 left in quarter making it 6-20.

Second quarter the Huskies made it in the end zone once making it 6-28.

Out of the half the Bobcats claw downfield and Jesse Duba carried the ball in on a 20 yard run.  Two point was not successful 12-28.

The Huskies came right back in the third quarter and scored 12-34.

Svehla caught another long pass from Weber, shed a tackle and found the end zone. 18-34

Huskies responded with another six and after trying three times (due to penalties)for the two point, punched it in. 18-42 with 5:55 in the third quarter.

Huskies can't stop with that and add eight more points with 1:53 left in the third quarter 18-50

EMF had a turnover and the Huskies capitalized making it 18-58.

The Cats did not give up and with 3:01 left in the fourth quarter Schluter carried the ball in making the  final 24-58. 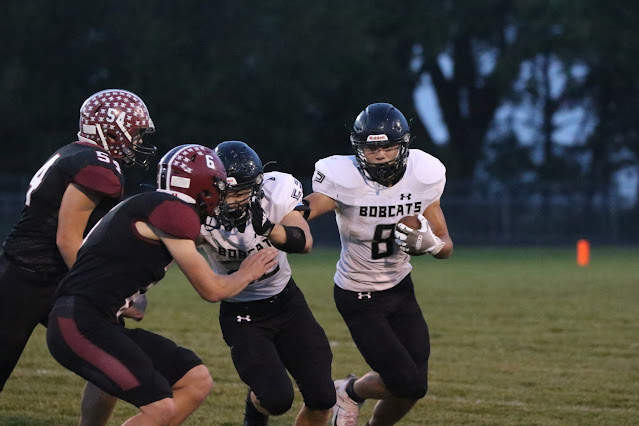 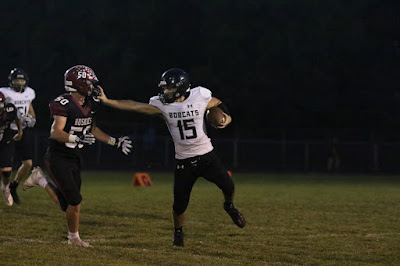 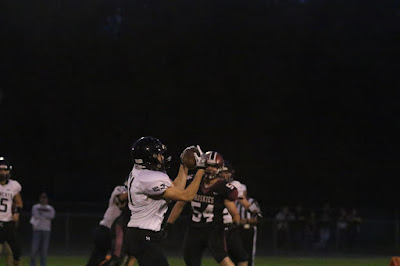 Cooper Girmus with the catch. 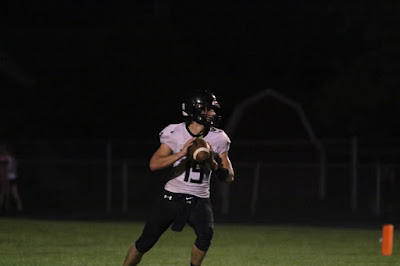 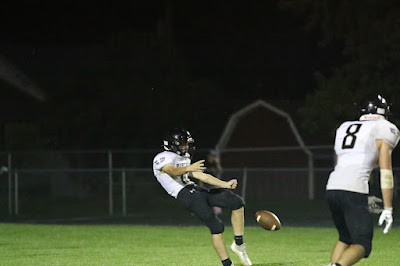 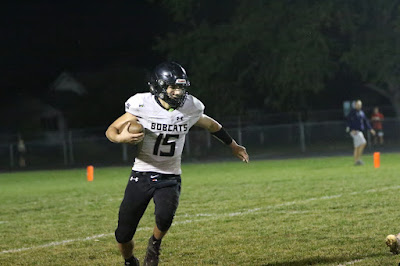 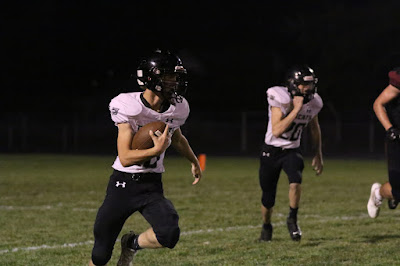 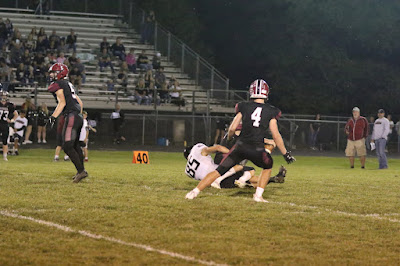 Chase Svehla with the sack. 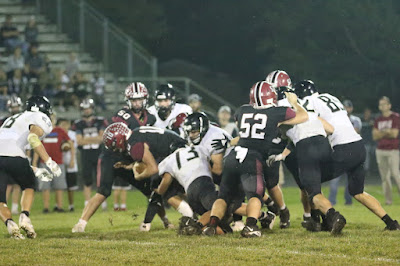 Peyton Pribyl and Ben Bartu with the stop. 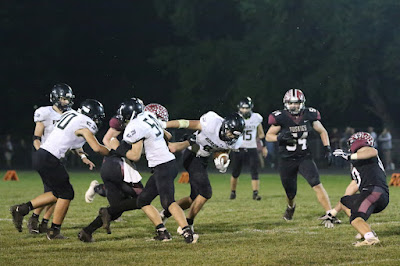 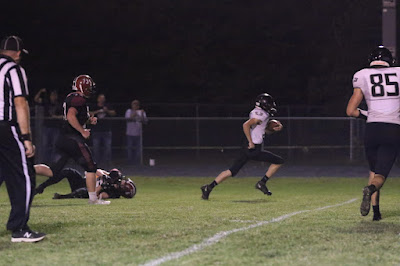 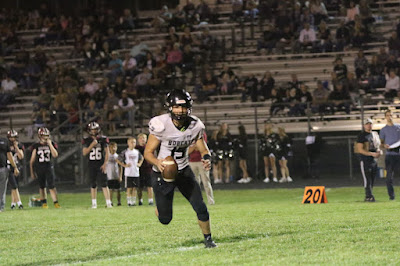 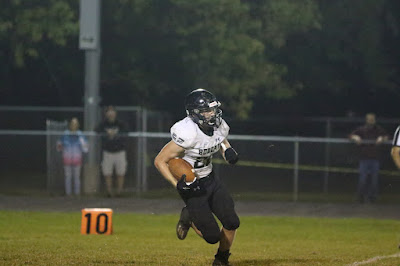 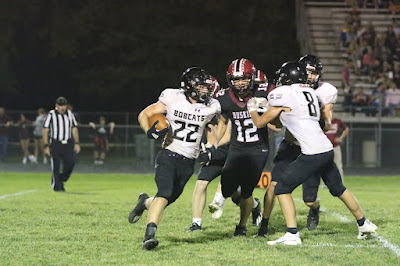 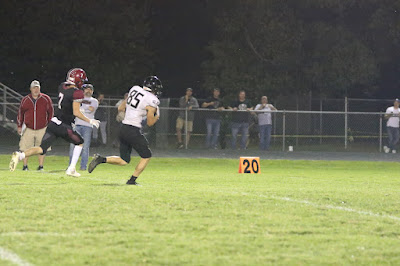 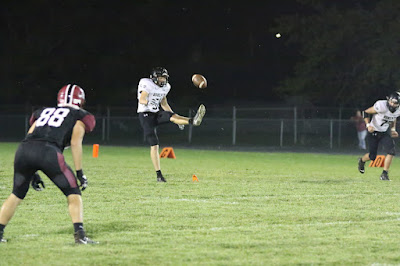 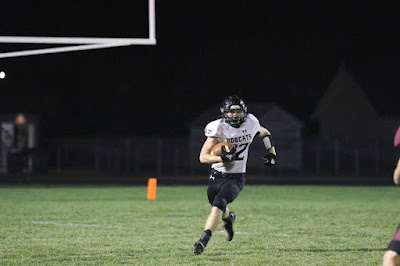 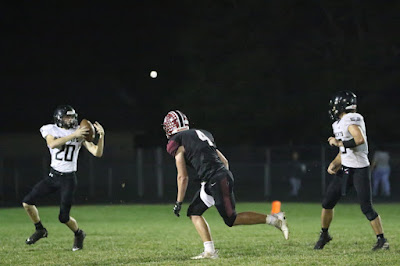 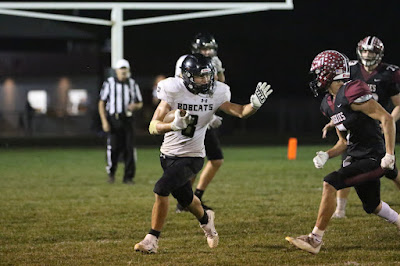 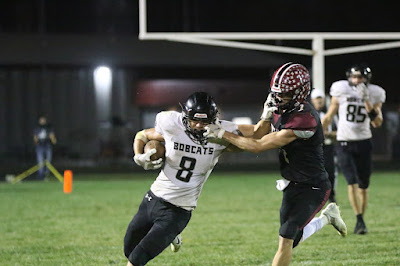 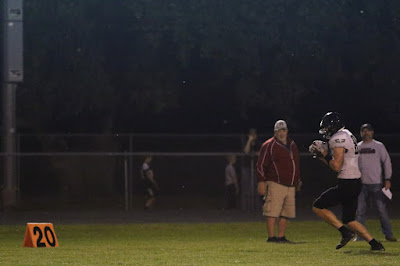 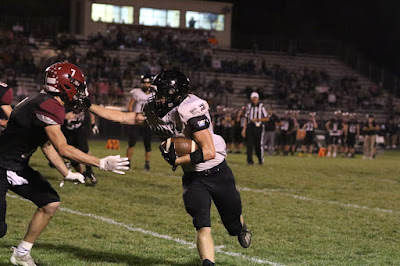